If you love I Love Lucy, you'll definitely get a kick out of The Long, Long Trailer. Director Vincente Minnelli's spritely farce about the havoc a massive trailer wreaks on a newlywed couple is a comic showcase for Lucille Ball and Desi Arnaz, who bring all their slapstick TV tricks to the big screen. A spanking new 4K master struck from the original camera negative, robust audio, and all the DVD extras make Warner Archive's Blu-ray presentation of this beloved film a must-have for fans of the madcap redhead. Highly Recommended.

Lucille Ball and Desi Arnaz didn't just conquer television when I Love Lucy premiered in 1951, they transformed it. What once was a novelty almost instantly became an essential household fixture, in large part because of their must-see show. Millions of Americans stayed home to watch the uproarious antics of Lucy and Ricky Ricardo each week, so it was only a matter of time before the film industry, which had spurned both Ball and Arnaz only a few years before, begged the pair to come back and bolster its sagging box office. MGM found a suitable vehicle (pardon the pun), but would Lucy and Desi's patented brand of lunacy provoke as many guffaws on the big screen as it did on the small screen?

Not quite, but in the hands of director Vincente Minnelli, The Long, Long Trailer - aided by the perks of color photography and widescreen - gave moviegoers of the day everything they loved about America's favorite redhead and her bongo-playing husband. Slapstick abounds in this episodic chronicle of a newlywed couple's rocky relationship with their cumbersome (to say the least) trailer, and though the film doesn't hold up nearly as well as the best episodes of I Love Lucy (I'd prefer a swig of Vitameatavegamin or a turn on the candy conveyor belt any day of the week), it remains an amiable farce that coasts on the charm and chemistry of its two iconic stars. 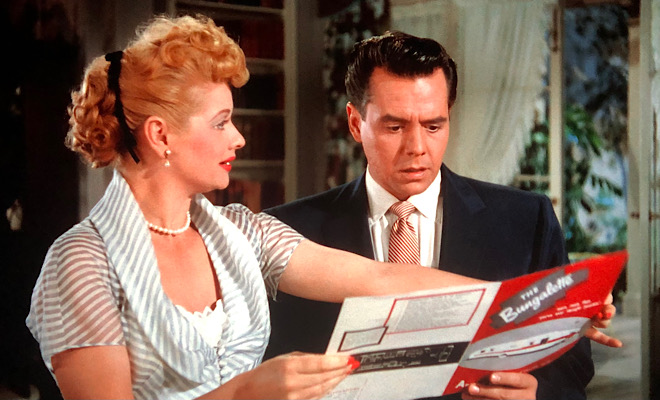 The Long, Long Trailer was filmed a couple of years before the Ricardos made their memorable cross-country trek out to Hollywood, but it might have given the I Love Lucy writers the idea. Adapted from Clinton Twiss' bestselling novel by the veteran husband-and-wife team of Frances Goodrich and Albert Hackett - who knew a thing or two about marital dynamics after scripting three Thin Man movies as well as Father of the Bride and its sequel Father's Little Dividend - The Long, Long Trailer sometimes feels as if it's a collection of sitcom episodes strung together. The lack of a cohesive plot lends this road picture a slightly choppy feel, but Minnelli's sure hand keeps it chugging along.

Tacy (Ball) and Nicky (Arnaz) - names that sound a lot like Lucy and Ricky - are about to get hitched, but not only to each other. Instead of getting tied down to a house in suburbia, the couple chooses to tie themselves and their car to a luxurious trailer and spend their honeymoon touring California. It sounds idyllic, at least to Tacy, but a host of problems beset the newlyweds from the get-go, and as disaster piles upon disaster, Nicky, who never wanted the trailer in the first place, quickly reaches his breaking point. The myriad mishaps, though, don't faze Tacy, who adores her trailer despite all the misery it causes...so much so, Nicky begins to wonder whether she loves it more than him. 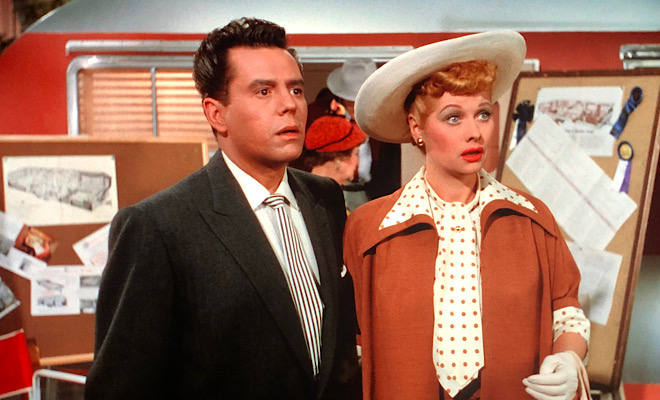 Ball and Arnaz nicely recreate their Lucy-Ricky chemistry and the screenplay deftly weaves several slapstick situations that could have been lifted directly from I Love Lucy into the story. One such bit ends with Lucy falling into a muddy gully during a downpour that mires the trailer in sludge, but the movie's most memorable comic sequence showcases Ball at her exasperated best as she tries to prepare a gourmet dinner while the trailer is in motion. A bumpy road causes crockery to careen out of cupboards and food to go flying as the trailer shakes, shimmies, jostles and tosses Lucy around like a rag doll, all while an oblivious Desi merrily sings a Latin song and drives on. Lucy hopelessly and hilariously tries to save her precious meal while dodging projectiles, slipping and sliding on the oily floor, and becoming covered in flour. It's the kind of fine and filthy mess only Lucy could get herself into and only Lucy could pull off.

Yet as adept a clown as Ball is here, Arnaz almost eclipses her, filing a spirited comic performance that's arguably better than any of his work on I Love Lucy. Watching him tangle with a stubborn shower head in the cramped trailer stall is a hoot and his apoplectic reactions to Lucy's aggressive driving and the destruction he causes when he backs the trailer into her aunt's house are priceless. Ball always claimed Arnaz never got enough credit for his comedic abilities, but The Long, Long Trailer gives him the chance to really flex those muscles and prove he's not just the straight man to his zany wife. 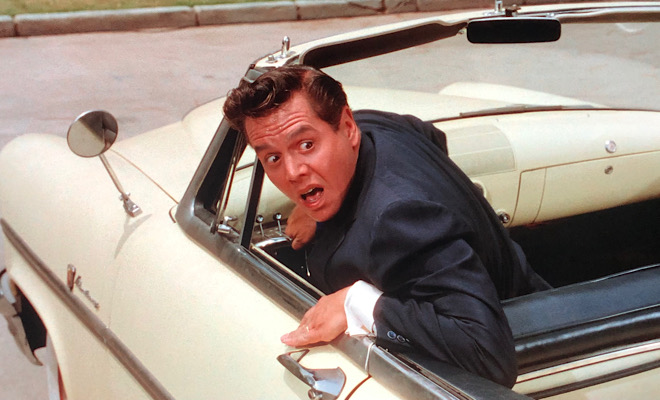 In addition to all the madcap mayhem, the movie paints a pretty accurate picture of the convivial trailer culture that still thrives today and the sumptuous color photography captures some breathtaking vistas in both Yosemite National Park and the rugged Mount Whitney area, where the nail-biting climax transpires. A fine supporting cast supplies added interest, but although Marjorie Main and Keenan Wynn receive featured billing, their parts are mere cameos. Wynn is only on screen for a minute or so and barely utters a word as an annoyed traffic cop, while Main plays a loudmouth, busybody trailer park patron, a thinly veiled take on her popular Ma Kettle character. Such venerable supporting players as Moroni Olsen, Bert Freed, Madge Blake (Aunt Harriet from the Batman TV series), Walter Baldwin, and Oliver Blake, many of whom appeared on an episode or two of I Love Lucy, also crop up throughout the film.

As a huge Lucy fan in my youth, I remember enjoying The Long, Long Trailer quite a bit when I first saw it on TV back in the 1970s. It's a bit dated today, but still has charm, verve, and most importantly, a solid laugh quotient. Though I Love Lucy parallels predominate, it's refreshing to see Ball and Arnaz outside of their milieu in more of a traditional romcom and enjoying a more tender and supportive relationship than they had in the bulk of I Love Lucy episodes. Watching them croon the lilting duet "Breezin' Along with the Breeze" as they drive through the California countryside reminds us what a perfect couple they were, despite their well-publicized troubles. The Long, Long Trailer isn't a long, long way from I Love Lucy, but it's just far enough to be a delightful diversion. 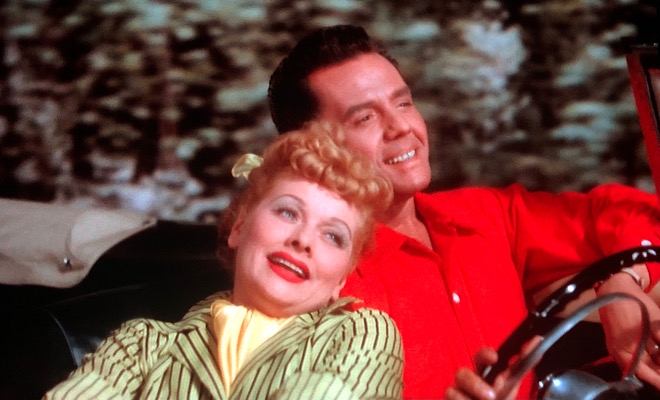 The Long, Long Trailer arrives on Blu-ray packaged in a standard case. Video codec is 1080p/AVC MPEG-4 and audio is DTS-HD Master Audio 2.0 mono. Once the disc is inserted into the player, the static menu without music immediately pops up; no previews or promos precede it.

Though most of The Long, Long Trailer was produced on a soundstage and the MGM backlot, the exterior shots of Yosemite National Park and the Mount Whitney area are appropriately breathtaking. All the decor in the trailer, the costume textures and patterns, and the driving rain in multiple scenes are crisp, flesh tones remain natural and stable throughout, and the close-ups are so sharp, it's tough to buy the 42-year-old Ball and 37-year-old Arnaz as young newlyweds. The spotless source material adds to the enjoyment of this spectacular high-def rendering that outclasses any previous home video release by a margin that's twice as wide as the titular trailer.

The DTS-HD Master Audio 2.0 mono track supplies clear, well-modulated sound. Automotive effects form the bulk of the track, and all the revving engines, screeching wheels, and the trailer's rattling chassis provide essential atmosphere for this rollicking road picture. Pouring rain, splintering dishes, and the squeaks and creaks of the trailer as it strains to scale the mountain at the end of the film are also distinct, and all the dialogue is easy to comprehend. A wide dynamic scale handles all the highs and lows of three-time Oscar-winner Adolph Deutsch's lively music score without any distortion, and no age-related hiss, pops, or crackle intrude. Though this track isn't particularly muscular, it handles its chores with ease and nicely fills the room.

All the extras form the 2006 DVD have been ported over to this Blu-ray release.

It's been a long, long time since The Long, Long Trailer looked this good. A brand new 4K scan struck from the original camera negative yields a sumptuous transfer that restores this engaging comedy to its original splendor. Excellent audio and all the supplements from the previous DVD enhance Warner Archive's Blu-ray presentation of this classic Lucille Ball-Desi Arnaz film that still tickles the funny bone. Highly Recommended.