MGM and Florenz Ziegfeld were a match made in movie heaven. Though their cinematic partnership didn't begin until a few years after Ziegfeld's death in 1932, it was a fruitful union that lasted a decade and encompassed three mammoth musicals. The studio first feted the legendary theatrical producer with the 1936 Oscar-winning biopic The Great Ziegfeld, then five years later mounted the glittery Ziegfeld Girl, which charted the rise and fall of three starry-eyed showgirls (Judy Garland, Hedy Lamarr, and Lana Turner). The latter musical's monster success inspired producer Arthur Freed and director Vincente Minnelli to employ MGM's vast and enviable stable of stars in a homage to Ziegfeld’s iconic “follies” that dazzled and charmed Broadway audiences with almost annual editions during the 1920s. Though originally envisioned as a series of musical spectaculars (much like the studio’s Broadway Melody films of the 1930s), only one edition of Ziegfeld Follies ended up getting made…but it’s a humdinger that beautifully evokes the over-the-top opulence and impeccable style that defined the vision and showmanship of the one and only Ziegfeld.

If you’re looking for a plot, you won’t find one here. Like its theatrical namesake, the cinematic Ziegfeld Follies is a collection of disparate musical interludes and comedy sketches with no connecting threads. William Powell, who played the title role in The Great Ziegfeld, reprises his part, but in a celestial capacity. From his heavenly penthouse suite, Ziegfeld sets the stage in the film's first few minutes by reminiscing about his storied career and expressing a wistful wish to produce "just one more" Follies with the exciting stars and advanced technology of “today.” 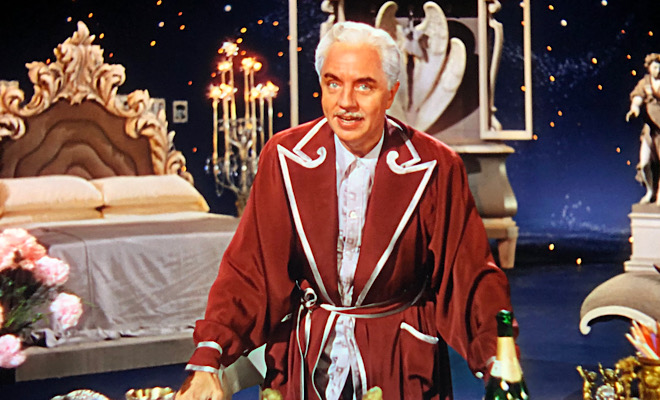 Ziegfeld enlists the earthly assistance of his “old pal” Fred Astaire, who opens the show with an ode to the sexy, statuesque Follies showgirls, “Here’s to the Beautiful Ladies.” That spritely song morphs into a lavish production number featuring a young, graceful ballerina named Cyd Charisse and a whip-wielding, drop-dead-gorgeous Lucille Ball, who tames a pack of slinking feline dancers draped in black sequined cat outfits (see video clip below). Ball utters not a single word and barely cracks a smile, but makes a stunning impression. It’s just a shame she’s not allowed to strut her comedic stuff in a later skit.

The eclectic mix of content continues with a soothing Esther Williams water ballet and rousing duet from La Traviata, sung by Metropolitan Opera stars James Melton and Marion Bell, but those are just warm-ups for a string of spectacular numbers performed by Astaire, Judy Garland, Gene Kelly, Lena Horne, and Kathryn Grayson. (More on them all below.) Each one brims with a way-ahead-of-its-time sophistication that's more relatable today than in 1946. Minnelli offsets the minimal, elegant, avant-grade sets with beautiful costumes and bold colors to produce an array of striking, self-contained sequences that stimulate the senses and complement the breathtaking talent on display.

Astaire dominates the proceedings, appearing in four numbers sprinkled throughout the film. After the aforementioned opener, his partner du jour Lucille Bremer (best remembered for playing Garland’s older sister in Meet Me in St. Louis, but who also co-starred with Astaire around the same time in one of his few flops, Yolanda and the Thief) joins him for an enchanting musical tableau set to “This Heart of Mine.” A revolving dance floor, conveyor belts, and a heaping helping of terpsichorean grace distinguish the elaborate sequence, but it's no match for the knockout “Limehouse Blues,” a powerful “musical pantomime” set in San Francisco’s Chinatown. The impeccably mounted and executed number casts Astaire as a poor, humble Asian man whose fascination with a cool Asian beauty (Bremer) leads to tragedy. A lyrical dream sequence that's the centerpiece of the mini-drama celebrates Asian culture while showcasing MGM’s musical artistry and providing Astaire and Bremer with a breathtaking routine that’s pure poetry in motion. 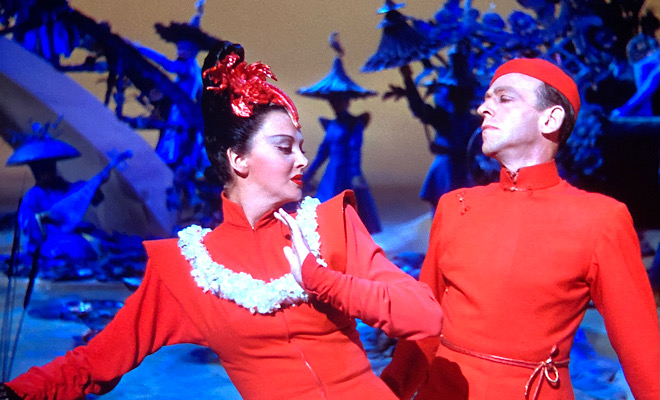 The last Astaire number teams the preeminent dancer with his equally preeminent counterpart, Gene Kelly, in a three-part traditional tap routine that remains one of the all-time highlights of musical films. MGM’s celebratory documentary That’s Entertainment! includes a snippet of “The Babbitt and the Bromide,” but seeing this exciting, energetic, athletic, and often humorous number in its entirety is a real treat and complete joy. Here's a more healthy taste:

Other musical highlights include Garland's uproarious spoof of Hollywood affectation, "A Great Lady Has an Interview." As a highfalutin, egotistical movie star known for her ultra-dramatic portrayals (but who harbors a secret desire to show the world she's "really hep"), Garland has a field day sending up the likes of Bette Davis, Katharine Hepburn, and Greer Garson, for whom the clever, rap-infused number was originally conceived. (That's right, I said rap.) Garland, who's flanked by a cadre of chipper chorus boys playing prying reporters, masterfully blends arch comedy with potent vocals in the satiric sequence, in which her nameless character soberly and reverently describes her next picture, "a monumental biographical tribute" to Madame Crematon, the unheralded inventor of that essential household staple...the safety pin! 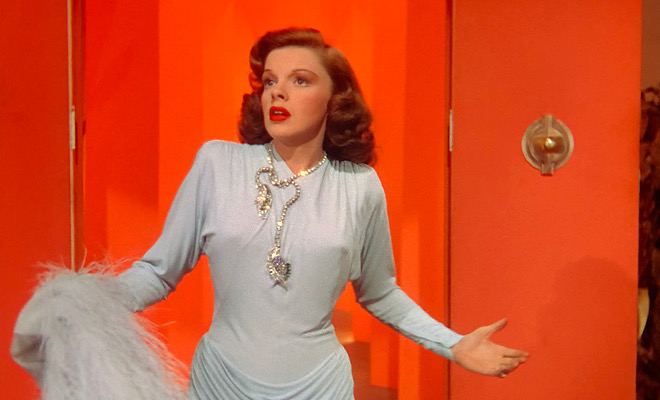 Horne also raises the rafters - and the temperature - with a scorching rendition of "Love" performed in a Caribbean dive bar. Horne always ignites the screen, but today the all-black number leaves a sour taste as it emphasizes the rampant racism and segregation permeating American society in the 1940s. Reportedly, the prejudicial presentation so incensed Horne, she refused to record the song commercially.

Sadly, the comedy sketches in Ziegfeld Follies often miss their respective marks. Keenan Wynn's "Number, Please," about a man's exasperating attempts to place an innocuous phone call, is pleasant enough, as is "Pay the Two Dollars," which cleverly lampoons the legal system, but both drag on too long. In her final film appearance, original Ziegfeld comedienne Fanny Brice enormously enlivens "The Sweepstakes Ticket" with her irrepressible energy and array of kooky facial expressions. Hume Cronyn and future I Love Lucy alum William Frawley make fine foils for Brice, but the stale material lets them all down. 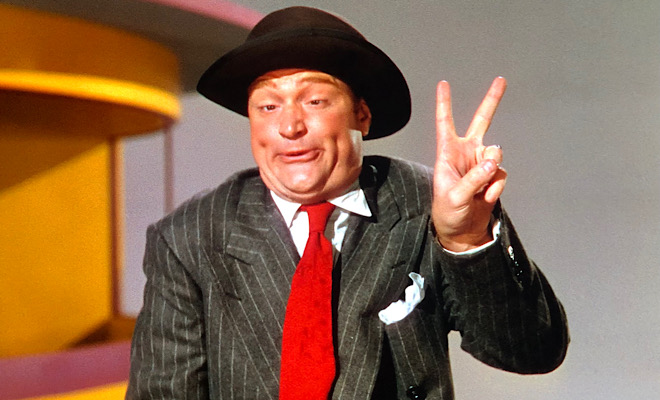 The overblown finale features soprano Kathryn Grayson warbling "Beauty," a song she supposedly hated. After the first syrupy chorus, a corps of dancers (including Charisse) laughably navigate mounds of soap suds that often engulf them. It's the epitome of excess, but Minnelli envisioned an even soapier number he couldn't ultimately pull off. During shooting, the suds machines ran amok, spewing bubbles galore (as well as an asphyxiating gas) that consumed the set and put the cast and crew at grave risk. What remains of the debacle in the finished film captures just enough garishness to pique interest and stands as a fitting coda to a movie that oozes opulence.

Audiences flocked to Ziegfeld Follies to see its all-star cast, but the movie's sophistication likely left many viewers of the day cold. Like a rich dessert, this ambitious revue doesn't suit every taste, but the more I see it, the more I appreciate its elegance, artistry, lofty aspirations, arch wit, and shameless ostentation. In the storied annals of MGM musicals, Ziegfeld Follies may not achieve crème de la crème status, but it's certainly unique...and a fitting testimonial to a towering theatrical figure and bygone art form, both of which we may never see again. 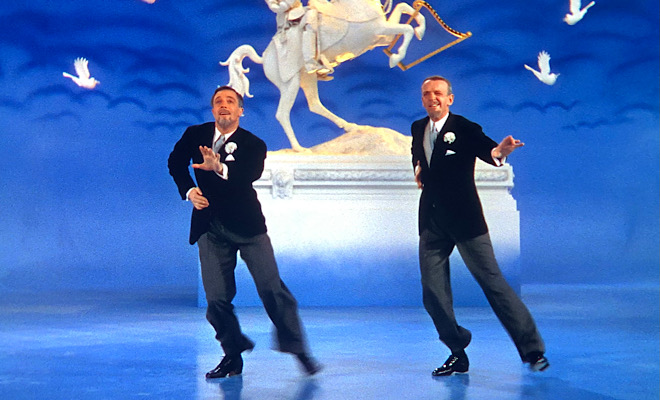 Ziegfeld Follies arrives on Blu-ray packaged in a standard case. Video codec is 1080p/AVC MPEG-4 and default audio is DTS-HD Master Audio 2.0 stereo. (The original mono track is also included.) Once the disc is inserted into the player, the static menu with music immediately pops up; no previews or promos precede it.

Like most MGM and Minnelli-directed musicals of the 1940s, bold, brilliant color bathes Ziegfeld Follies, and the 1080p/AVC MPEG-4 transfer from Warner Archive (which looks as if it underwent a glorious restoration prior to its high-def release) beautifully and faithfully honors the lush Technicolor photography of 13-time Oscar nominee George Folsey and two-time Oscar winner Charles Rosher (who would take home the coveted prize the same year for The Yearling). Gorgeous reds assault the senses throughout, but an array of stunning blue shades impress as well. Lucille Bremer’s bright yellow dress in the early portion of the “Limehouse Blues” number dazzles the eye, as do the deep pinks in the opening ensemble number, as evidenced by Virginia O'Brien's outlandish outfit below.. 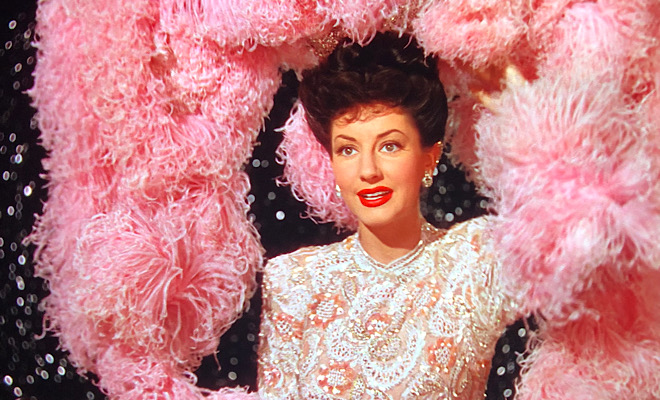 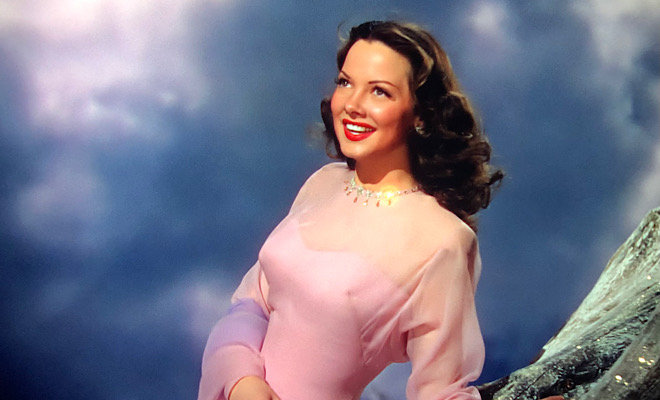 Faint grain preserves the film-like feel, excellent clarity and contrast enhance both detail and depth levels, and flesh tones look surprisingly natural. Razor sharp close-ups accentuate the glamor of Ball, Garland, Horne, Bremer, Williams, and Grayson, and not a single nick, mark, or errant scratch mar the pristine source material. This is another in a lengthy - and much appreciated - string of top-quality musical transfers from Warner Archive, which certainly understands the meaning - and allure - of eye candy and knows how to present it in the finest possible manner.

Both DTS-HD Master Audio stereo and mono tracks are included, and both provide clear, well-modulated, and robust sound. The edge, however, clearly goes to the stereo track. Musicals benefit immeasurably from two-channel audio, and though the stereo process had not yet been formally invented in the mid-1940s, Warner technicians have fashioned a lively stereo presentation from the original soundtrack recordings. The result is a wonderfully immersive track that heightens the impact of such classic numbers as “Limehouse Blues,” “This Heart of Mine,” “Love,” “Beauty,” and the opulent opening set piece. A wide dynamic scale handles all the variances of the sumptuous orchestrations by such MGM stalwarts as Roger Edens, Lennie Hayton, and Conrad Salinger - as well as the belting of Garland and Horne and high Cs of Grayson - without a hint of distortion, and such sonic accents as ringing telephones in the “Number, Please” comedy sketch, Ball's whip cracking, and the energetic tapping of Astaire and Kelly in the “Babbitt and the Bromide” number are crisp and distinct. All the dialogue and song lyrics are easy to comprehend, and no age-related hiss, pops, or crackle mar this vital, often exciting mix.

A bounty of rare vintage supplements augment the disc.