Missing in Action 2: The Beginning [KLSC]

What was to be the first of a franchise became the prequel with Chuck Norris’ Missing In Action 2: The Beginning. Directed by Lance Hool, the film plays as an action-heavy prison break film only without the subtlety of a Bridge on the River Kwai or the gravitas of The Great Escape. It’s a Cannon film. Now Kino Lorber Studio Classics gives this prequel a new restoration, solid audio, and a smattering of bonus features. Recommended.

Before he returned to Vietnam to rescue American POWs, Colonel James Braddock (Chuck Norris) first had to break out of ‘Nam! For the last ten years, Braddock and his crewmen have been held captive by the diabolical Colonel Yin (Soon-Tek Oh) and forced to work the opium fields. Physically and psychologically tortured, Braddock has held strong looking for any means to escape and rescue his men. When that opportunity finally comes, Braddock unleashes hell upon Yin’s men exacting his decade-long dream of revenge.

Producing partners and cousins Golan and Globus and their Cannon Group production company were the talk of Tinseltown in the 80s. Flush with cash and a few small hits under their belts, they were churning out low-budget big-profit films left right, and center. For a while anyway. With action star Chuck Norris in their corner, they aimed to create a full-fledged action franchise for the martial arts uber-god. As Stallone was working to get Rambo: First Blood Part II into production, Golan/Globus punched out Missing in Action into theaters as fast as possible. Only, Missing in Action wasn’t the first one filmed.

Lance Hool directed the would-be first film in the Caribbean and Mexico while Joseph Zito churned out the sequel in the Philippines. When Zito’s film turned out to be the better offering, his “sequel” became the first film to hit theaters while Hool’s efforts coasted in as the prequel/sequel four months later to even worse critical reception and far lower box office returns. And to be honest, as daffy and fun as this movie is, it’s not actually really that good. It’s enjoyable but in that cheap quality that would be a signature of all Cannon films. The production values often feel thin and any dramatic ideas or notions are ill-served by a fairly one-dimensional screenplay. And then there are the continuity issues as a lot of pieces of this film don’t cohesively connect to its predecessor - and then made worse with Braddock: Missing in Action III. But who cares about continuity when Chuck Norris is there to kick ass, right? 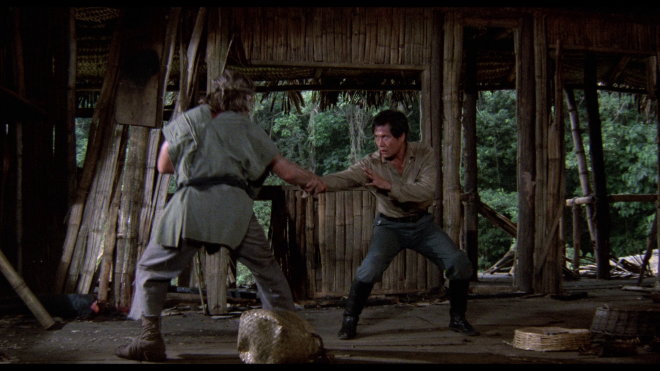 Hool certainly tried to make something here, it’s not a completely wasted effort. As the controversy about American POWs in Vietnam was a hot-button passionate talking point in the 80s, the film was timely, and with Norris wanting to pay tribute to his deceased brother it was well-intentioned. It may feel a little predatory now as the film certainly preys on the hopes of American families that their lost sons could someday come home, it’s at the very least entertaining as much as it is exploitative.

And yeah, it is entertaining. Stupid, yes, but entertaining. Chuck Norris didn’t exactly have the most charismatic screen presence, but he had a steely-eyed stair and could actually perform some impressive stunts and look like he could take on an army all on his own. And of the first two films in this weird little franchise, I’d say Norris was on much better dramatic footing here. He wasn’t simply going through the high-kicking motions and pulling triggers. The film itself may not have been well executed, but the effort was there. In truth, this is where the franchise should have ended, but just a couple of years later we’d see Norris return to Vietnam... again.

Vital Disc Stats: The Blu-ray
Missing in Action 2: The Beginning breaks out for another run at Blu-ray freedom, this time from Kino Lorber Studio Classics. Pressed on a Region A BD-50 disc, the disc is housed in a standard case with slipcover. The disc loads to a static image main menu with standard navigation options. 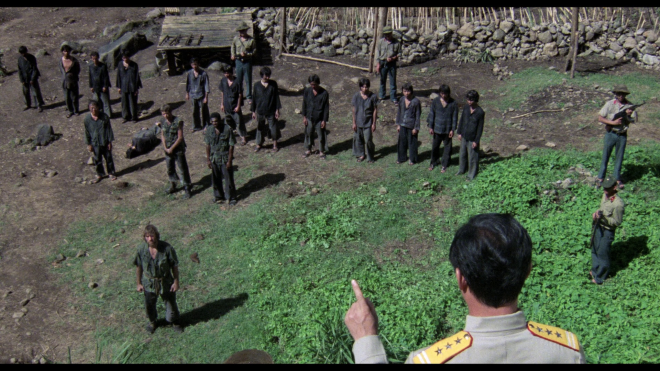 Like its first sibling, Missing In Action 2 was reportedly sourced from a new 4K scan of the original 35mm negative and it looks damn good here. The first 2012 Blu-ray was pretty good for its day but it doesn’t take long for this new disc to show its quality. Colors are bold and lush with healthy natural greens. Primaries are in excellent form with healthy skin tones. Black levels are nice and inky for key sequences although some scenes remain that punch them closer to brown. This release is cleaner without the speckling issues of the last disc. Film grain is healthy and appropriately cinematic, but again some darker scenes can appear quite a bit noisier than bright daylight sequences. This disc also doesn’t display the same edge enhancement issues and I didn’t notice any signs of DNR or smoothing. 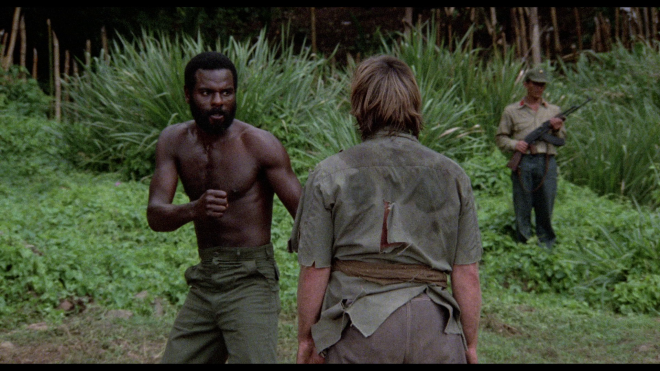 Once again, Missing in Action 2: The Beginning is held captive by a rather limited DTS-HD MA 2.0 track. Dollars to donuts my bet is this is the same track that dates back to the 2012 Blu-ray. It’s alright and gets the job done but it’s not all that sonically impressive either. Dialog is clearly rendered and action sequences do come to life, but it’s also not a wall-shaking track as the bass is fairly thin for those gunshots and explosions and the Brian May score is also a little shaky in places. It's not going to set your receiver and speakers on fire. 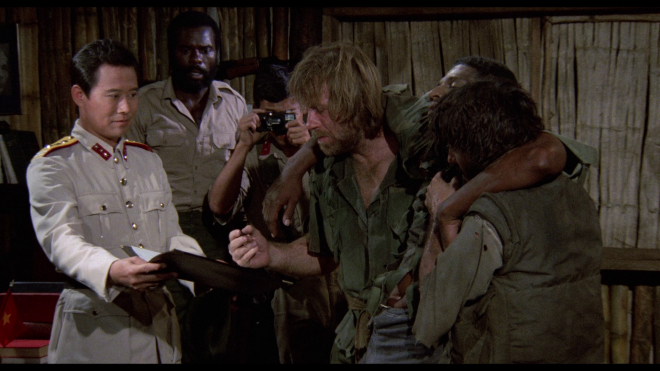 Bonus features are again pretty thin for this release but we do pick up a nice new Audio Commentary featuring director Lance Hool and moderated by Daniel Kremer. Hool offers up a lot of info about the production, his first time directing, working with Norris and the film’s belated release in favor of the sequel. The rest of the extras are made up of KLSC’s usual gallery of related theatrical trailers. 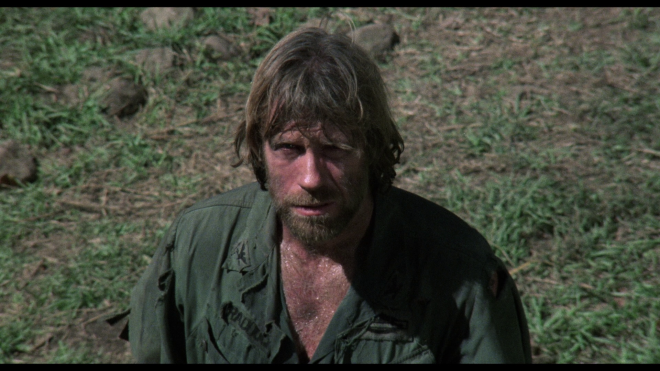 Missing in Action 2: The Beginning was wisely replaced by its sequel as the first film to theaters. This pseudo-prequel is well-intentioned but trying to be an action-heavy prisonbreak film with a message it’s a bit too goofy for its own good - right down to the Japanese WWII uniforms standing in for Vietcong attire. Chuck Norris holds the film together as the driving force and he’s in good form and it’s a fun flick for sure but it’s where the franchise should have ended. Cannon just didn’t know when or where to quit. Now Kino Lorber Studio Classics gives Cannon fans another tour of duty with a new Blu-ray offering up an excellent new restoration, the same middling audio, and an excellent new audio commentary to prop up the bonus features. Recommended