The war is over, but for Chuck Norris his battle has just begun in Missing In Action. Cannon’s answer to Rambo: First Blood Part II, Norris goes back behind enemy lines to rescue MIA’s from Vietnam in an absurdly entertaining action flick. Kino Lorber Studio Classics brings this 80s masterpiece back to Blu-ray with a new 4K-sourced restoration, clean audio, and only a smattering of bonus features. Recommended

Ten years after the end of Vietnam, the debate about missing American soldiers in Vietnam rages on. After recently escaping from a POW camp himself, Special Forces Colonel James Braddock (Chuck Norris) is asked by the State Department to return to Vietnam with a delegation to confirm the existence of any remaining POWs. Only Braddock doesn’t play by the rules as a one-man army he’ll infiltrate deep behind enemy lines with his old pal Tucker (M. Emmit Walsh) to rescue any remaining Americans and kill anyone that gets in his way.

For all of you newcomers out there, if this film bares any resemblance to Rambo: First Blood Part II - that’s not a coincidence. Cousins and partners in cinematic crime, Golan/Globus were pitched the First Blood followup by Stallone. Rather than paying his huge fees and taking on an incredible production cost, they simply recycled the ideas, slapped them into an action film they were already developing, and then got the next big action star available, God himself - Chuck Norris. And true to any Cannon film, why spend all of your budget on one movie when you can cut it in half and make two?

This film famously was shot as the intended sequel, but ace producers Menahem Golan and Yoram Globus saw this would-be Jospeh Zito-helmed sequel as the superior film and quickly fast-tracked it as the first show out of the gate to theaters. That left the original Lance Hool-directed Missing in Action to stand in as a prequel complete with the confusing title Missing in Action 2: The Beginning. Zito would go on to team up with Norris for the Christmas classic Invasion U.S.A. but sadly skip out when it came time to fire up the rocket boat for Braddock: Missing in Action III. 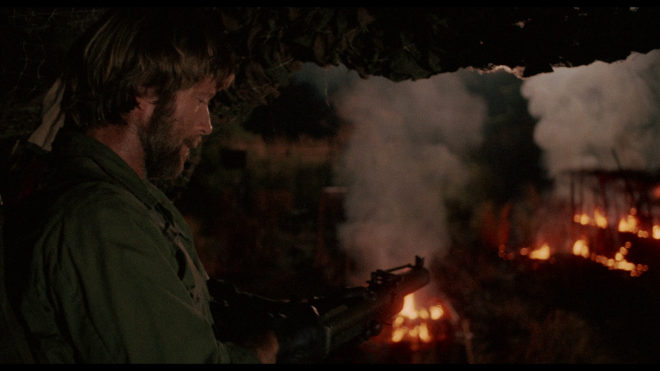 On its own, this is a pretty fun flick. Ridiculous, but a lot of fun and a true product of the Reagan era. The first half of the film plays closer to an action thriller as Norris’ Braddock returns to Vietnam and aims to find a rumored POW Camp. But once he’s got that useful tidbit of info, it’s off to the races and the M-60 machine guns with unlimited ammo. To say this film takes “one-man army” action hero concept to absurd levels is an understatement. But then, that’s true for the sequels too. Its politics and depictions of Vietnamese people are far from subtle and the action sequences are beyond ridiculous. But, this is a Cannon film and I wouldn’t have it any other way!

Vital Disc Stats: The Blu-ray
Missing in Action returns to Blu-ray for a third time, now thanks to Kino Lorber Studio Classics. Pressed on a Region A BD-50 disc, the disc is housed in a standard case with slipcover. The Disc loads to a static image main menu with traditional navigation options. 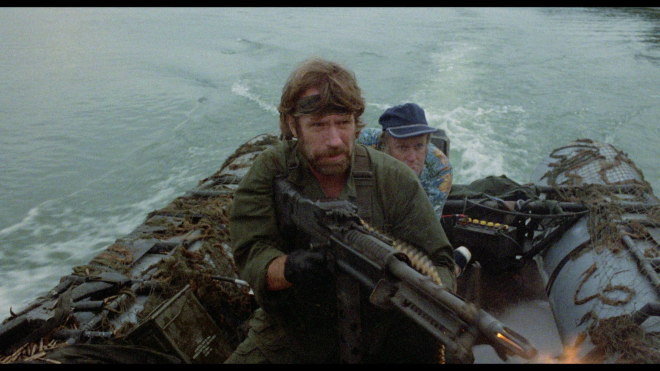 In the way back of 2012, Missing in Action scored a decent enough but hardly amazing Blu-ray release from MGM/20th Century Fox. In 2017 we saw Shout Factory put out their own Collector’s Edition release but the transfer wasn’t much - if at all - better than what we already had. But now Kino Lorber Studio Classics throws some new ammunition to this fan favorite with their Blu-ray reportedly sourced from a new 4K transfer. While the improvements may not be explosive, it’s a safe call to say this is a better-looking release. For starters, it’s not as dark looking. Brighter than the 2012 disc, jungle greens are more lush and healthy looking and skin tones don’t look so sickly and ashy as before. Primaries are in much better shape with more vivid lifelike reds, yellows, and blues. Without all of the thick crunchy edge enhancement, fine details look more natural now without the compression artifacts. Film grain is also better defined without looking quite so goopy. Speckling and other damage has also been taken care of. All around a welcome improvement. 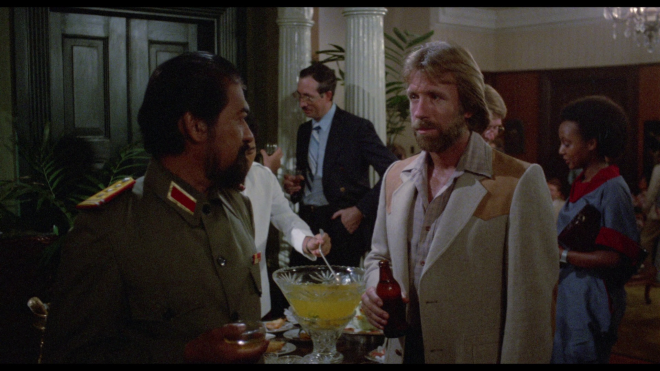 On  the audio front, we’re treated to a DTS-HD MA 2.0 track that in typical 80s fashion is frontloaded and aggressive with plenty of explosions, gunfire, screaming, and just overall loudness. But that’s a good thing! Dialog - what there is of it - comes through clean and clear without issue. The soundscape has plenty of atmosphere for the quieter moments or early during the press conference scene and action sequences are large and lively - even if the explosions and gunshots have that overpowered canned quality. All in all an effective mix. 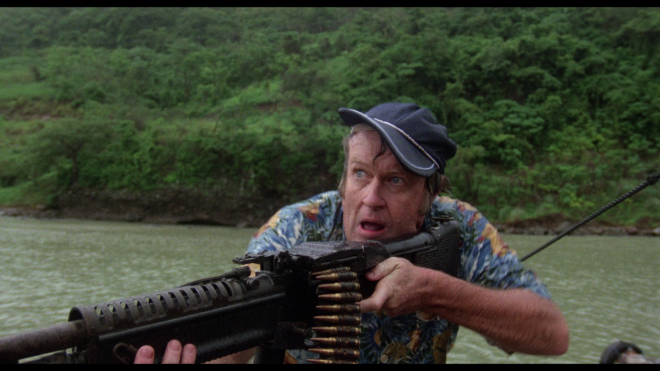 Bonus features for this return to Missing in Action are on the light side. In addition to KLSC’s usual collection of related trailers, this disc recycles the same bits and pieces found in Shout Factory’s 2017 Collector’s Edition - which isn’t necessarily a bad thing. That Zito commentary is very interesting and shows just how under the gun they were and had to adjust the script dramatically during filming. Also included is the James Bruner interview which also offers more interesting behind-the-scenes insight. 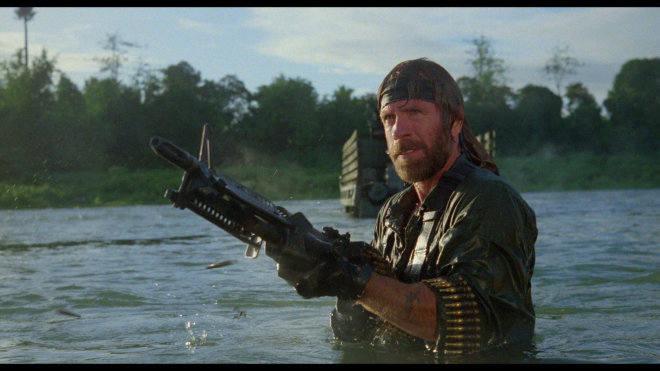 Hollywood does what Hollywood always loves to do most and that's cannibalize itself. Why have just one big movie featuring a popular action star invading Vietnam when you could have two… or three… or four? Missing in Action may have been rushed to beat Rambo: First Blood Part II to screens but it turned out to be a pretty decent flick. It may not have been intended to be the first of the franchise out of the gate, but powers that be made it so and it was one of Chuck Norris’ biggest hits. It’s a goofy intensely jingoistic nonsense, but it’s fun goofy jingoistic nonsense that is peak Reagan 80s action movie mayhem. Recommended

Missing in Action 2: The Beginning