When a poison-pen theater critic discovers his two kindly old aunts are poisoning scads of elderly men and burying their bodies in their Brooklyn basement, mayhem results...and continues throughout director Frank Capra's hilarious adaptation of the hit Broadway black comedy. Arsenic and Old Lace still tickles the funny bone, thanks to a marvelously manic performance from Cary Grant, a snappy script with plenty of laugh-out-loud one-liners, and a ghoulishly macabre story. Criterion honors this Golden Age classic with a sumptuous transfer and excellent audio, but skimps in the extras department. Despite the supplement slip, this terrific presentation will thrill the film's fans and is well worth a purchase. Highly Recommended.

"Insanity runs in my family. It practically gallops."

It's lines like those, especially when delivered by a manic Cary Grant, that make Arsenic and Old Lace so much fun. Deftly mixing farcical comedy with the macabre, director Frank Capra's breathlessly paced adaptation of Joseph Kesselring's hit Broadway play just might be Hollywood's looniest Halloween film. If you're tired of watching Jamie Lee Curtis go toe-to-toe with Michael Myers for the umpteenth time, why not lighten the mood this All Hallows' Eve with this riotous Golden Age gem that's just creepy enough to provide some requisite chills.

After marriage-averse Mortimer Brewster (Grant) surreptitiously ties the knot at City Hall with his long-time sweetheart Elaine Harper (Priscilla Lane), who's literally the girl next door, the couple returns to their respective Brooklyn abodes to pack for their Niagara Falls honeymoon. Mortimer's nuptials thrill his two aged aunts, Abby (Josephine Hull) and Martha (Jean Adair), but when Mortimer innocently opens the window seat in their living room and espies the dead body of an elderly man, all hell breaks loose. Nonplussed by Mortimer's gruesome discovery, the sweet old biddies nonchalantly admit to poisoning the man with a lethal cocktail of elderberry wine laced with arsenic, strychnine, and cyanide. The poor depressed fellow was bereft of family and friends, they say, and they felt so sorry for him they simply did what was right and put him out of his misery.

Mortimer can barely believe his ears, but when his aunts confess to bumping off almost a dozen other lonely old men in the same manner, he becomes apoplectic. How do they dispose of all those bodies? Lucky for them, Mortimer's delusional brother (John Alexander) believes he's President Teddy Roosevelt (whenever he charges up the stairs to his room, he thinks he's charging up San Juan Hill), so Abby and Martha tell "Teddy" their victims have succumbed to yellow fever, and he dutifully takes them to the basement where he entombs them in a series of "locks" that are part of the Panama Canal construction. 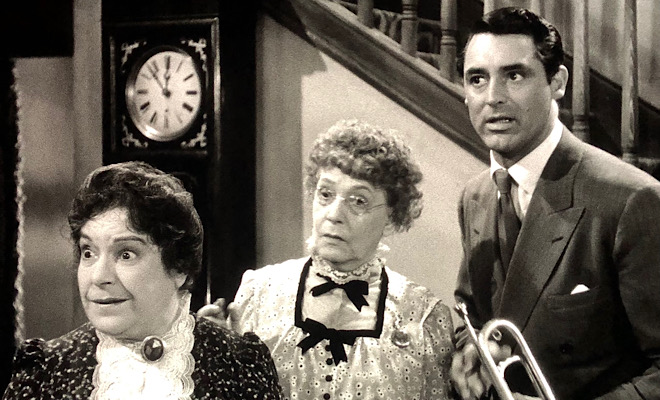 If all that insanity isn't enough, Mortimer's other brother Jonathan (Raymond Massey), a much more vicious serial killer, arrives home with his sycophantic sidekick Dr. Einstein (Peter Lorre) and their latest dead victim, who they also stash in the window seat. Einstein performed plastic surgery on Jonathan so he could evade the police, but his handiwork - much to Jonathan's chagrin - turned him into a doppelgänger for Boris Karloff! As Mortimer tries to get Teddy committed to a rest home, keep his aunts from murdering any more old transients, put off the ever more suspicious Elaine (who begins to doubt her new husband's affection), distract the neighborhood cop-on-the-beat (Jack Carson), and escape the desperate Jonathan's ever increasing wrath, he must also assuage his own fears that the mentally deficient Brewster genes will someday make him a shoo-in for the loony bin, too.

Amazingly, all that bedlam is inspired by the deadly deeds of real-life serial killer Amy Archer-Gilligan, who murdered a couple of husbands and dozens of elderly men...after she became their sole beneficiary. Money, not mercy, was Amy's motive, but when theatrical producers Howard Lindsay and Russel Crouse persuaded Kesselring to transform her grisly story into a black comedy all three hit pay dirt. The rapid-fire screenplay by Julius J. and Philip G. Epstein of Casablanca fame keeps the madcap hilarity intact while opening up the play and beefing up the parts of Mortimer and Elaine to suit Grant's and Lane's star status. Capra, who hadn't made a comedy without an underlying social message since 1934's It Happened One Night, masterfully tempers the hijinks with spooky undertones. Arsenic and Old Lace takes place on Halloween and Capra capitalizes on the holiday's eerie nature, using dark noir lighting to create a sense of ghoulish foreboding after Jonathan and Dr. Einstein arrive on the scene. 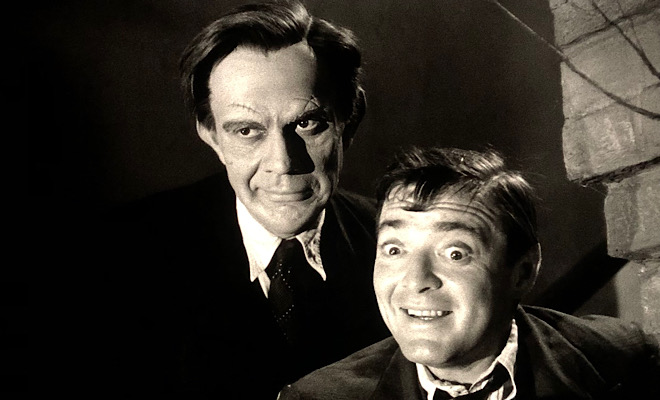 Filmed in the fall of 1941, Arsenic and Old Lace sat on the shelf for almost three years(!) due to a contract clause forbidding the screen adaptation to be released until the play ended its Broadway run. At the time of the agreement, the stipulation seemed reasonable to Warner Bros studio chief Jack L. Warner, who paid the unheard-of sum of $150,000 for the play's rights. Warner believed the show would close in a few months, but it hung on for a whopping 1,444 performances, much to the mogul's ire. The interminable wait, though, didn't hurt the movie's box office take. Arsenic and Old Lace raked in almost $5 million when it finally premiered in September of 1944, giving Warner Bros a hefty return on its investment.

Adair, Hull, and Alexander, who originated their respective parts on Broadway, received special dispensation to take a hiatus from the show to recreate their roles on film. They're all wonderful, striking just the right comic tone while remaining lovably human. Alexander especially lights up the screen with a spot-on imitation of Teddy Roosevelt. Sadly, Boris Karloff, the play's biggest star and main draw, was denied permission to reprise his part because the producers feared his prolonged absence would tank ticket sales. Thus one of the play's funniest gags - a character who's the spitting image of Boris Karloff is actually played by Boris Karloff - isn't quite as funny on film. Massey does a fine job in a rare comedic part, but it's tough not to wish we were watching Karloff instead. 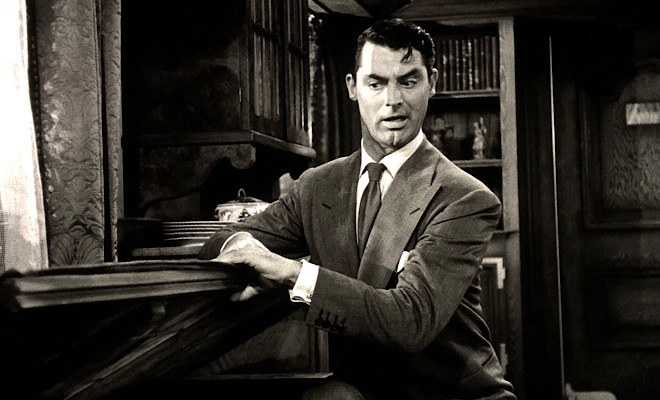 Grant is an absolute delight as Mortimer. Always a master of double takes, Grant takes them to a whole new level here, filing a wonderfully hyper, over-the-top portrayal that showcases his physical grace and uncanny ability to make the ridiculous sublime. Grant reportedly hated his performance in the film, often citing it as his least favorite piece of work, but his frequent mugging and exaggerated reactions to the chaos around him utterly suit the material and add even more laughs to a movie that overflows with them. Capra reassured a concerned Grant during production that they would reshoot his close-ups to tone down his facial expressions, but the Japanese attack on Pearl Harbor, which occurred just as filming wrapped and prompted Capra to immediately enlist in the military, spoiled those plans. Grant was crestfallen, but I'm glad his original performance remains intact.

I've always liked Priscilla Lane. Her career was brief, but she made several fine movies (one of which is Alfred Hitchcock's Saboteur) and never gets the acclaim she deserves. Her part is minor in the picture's grand scheme, but she brings ebullience, beauty, and some much-needed sanity to the table and creates nice chemistry with Grant. Peter Lorre is also quite good, expertly exploiting his quirky screen persona - and using his bulging eyes to perfection - as Jonathan's Igor-like pal.

Arsenic and Old Lace packs in plenty of topical references that may fly over the heads of today's viewers, but the bulk of its comedy remains timeless. In the respective film canons of Capra and Grant, Arsenic and Old Lace may be overshadowed by more famous and substantive titles, but this ghoulish, rambunctious, uproarious romp deserves an annual Halloween spin. It's not a ghost story, but it will certainly raise your spirits. 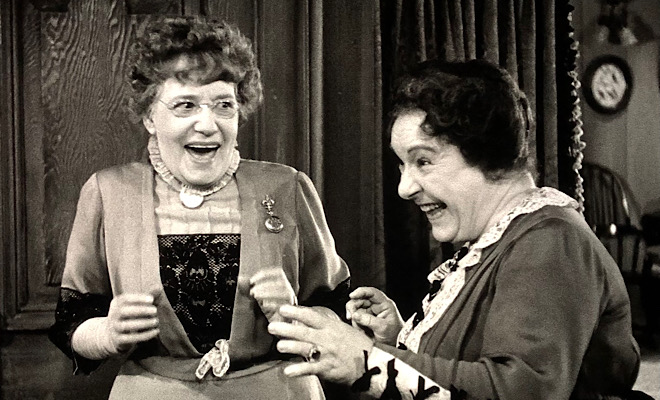 Vital Disc Stats: The Blu-ray
Arsenic and Old Lace arrives on Blu-ray packaged in a standard Criterion case. A 12-page fold-out booklet featuring an essay by filmmaker and critic David Cairns, a few scene stills, a cast and crew listing, and transfer notes is tucked inside the front cover. Video codec is 1080p/AVC MPEG-4 and audio is LPCM mono. Once the disc is inserted into the player, the static menu with music immediately pops up; no previews or promos precede it.

Criterion produces a breathtaking 1080p/AVC MPEG-4 transfer that outclasses every other home video rendering of Arsenic and Old Lace. The liner notes state, "This new digital transfer was created in 16-bit 4K resolution on a Lasergraphics Director film scanner from the 35 mm nitrate original camera negative." From the opening titles to the closing credits, the crisp, vibrant image remains remarkably consistent and flaunts a lovely film-like feel. Faint grain supplies a hint of texture and superior clarity and contrast produce a palpable sense of depth. Rich, inky blacks lend the picture a silky lushness and produce stunning silhouettes, the bright whites resist blooming, and the nicely varied grays accentuate fine details. Fabrics and patterns are distinct and stable, background elements are easy to discern, excellent shadow delineation heightens the suspenseful mood during the more nefarious sequences, and an array of crystalline close-ups showcase the deep scars on Massey's face, Grant's tousled hair, Lane's girl-next-door loveliness, and the wrinkles on Adair's and Hull's faces. No nicks, dirt, or scratches mar the pristine source material or disrupt the elegant flow of this spectacular effort from Criterion. Fans of the film are in for a treat.

According to the liner notes, "The original monaural soundtrack was remastered from the 35 mm optical soundtrack positive." The resulting LPCM track outputs clear, well-modulated, and often robust sound that enhances the frenetic on-screen action. Sonic accents like Teddy's blaring trumpet, slamming doors, and the creaky hinges of the window seat are crisp, while atmospherics like howling wind, the rustle of falling leaves, and the mewing of a cat supply essential nuances. A wide dynamic scale embraces the soaring highs and weighty lows of Max Steiner's whimsical and menacing score and all the rapid-fire dialogue is well prioritized and easy to comprehend. No distortion is present and any age-related hiss, pops, and crackle have been erased. This is a clean, bold track that adds punch to this madcap farce with suspenseful highlights.

Criterion seriously skimps on the supplements, which is somewhat baffling considering the film has a rich production history and an esteemed cast.

Frenetic, morbid fun from beginning to end, Arsenic and Old Lace remains a riotous romp fueled by a breakneck script and high-energy portrayals. A few thrills spice up director Frank Capra's zippy adaptation of the classic black comedy that should make everyone think twice before accepting a glass of elderberry wine. Criterion honors this ghoulish farce with a pitch-perfect transfer struck from the original camera negative and excellent audio, but the very slim supplemental package is a disappointment. Despite the extras fumble, this edition of Arsenic and Old Lace scores a touchdown and comes Highly Recommended.