A tough, taut film noir about the government's takedown of an organized crime syndicate, The Turning Point mixes action with emotion and features magnetic performances from William Holden, Edmond O'Brien, and Alexis Smith. Kino's excellent Blu-ray presentation, which includes a slick remastered transfer, robust audio, and an absorbing commentary track, gives this unsung crime drama the respect it has long deserved and makes it a prime pick for any noir aficionado. Highly Recommended.

Mention The Turning Point and the 1977 estrogen-fueled drama about the ballet world starring Anne Bancroft and Shirley MacLaine instantly springs to mind, but a quarter century earlier another movie with the same title hit theaters. 1952's The Turning Point runs on testosterone and dances to a far different beat as it chronicles the efforts of a dogged special prosecutor and intrepid journalist to nail a mob kingpin and shut down his syndicate. Though director William Dieterle's crackling film noir has been overshadowed by flashier genre flicks over the years, its Blu-ray release provides an opportunity to rediscover this expertly crafted, utterly absorbing crime-vs.-justice yarn.

Prosecutor John Conroy (Edmond O'Brien) has been tapped to head a committee tasked with eradicating "bookies, slot machines, graft, and corruption" in a nameless Midwestern city. His main target is Neil Eichelberger (Ed Begley), a portly, cigar-chomping "businessman" who runs a ruthless crime syndicate. Convoy's boyhood pal Jerry McKibbon (William Holden), a cocky newspaper reporter, also wants to expose Eichelberger and follows his own hunches to achieve that end. One of them leads to the revelation that Conroy's dad Matt (Tom Tully), a veteran cop and the committee's chief investigator, has been in Eichelberger's pocket for years.

McKibbon persuades Matt to go straight - and promises to keep his ugly past from his son - but the sly Eichelberger smells a rat and orders a hit on Matt. Further complications arise when McKibbon falls in love with Conroy's girlfriend and "girl Friday" Amanda Waycross (Alexis Smith). Amanda returns McKibbon's affections, but their clandestine affair provokes pangs of guilt. As Conroy's investigation zeroes in on Eichelberger, the kingpin feels increasingly cornered and resorts to rash and violent acts to get the zealous prosecutor - and snooping journalist - off his back. 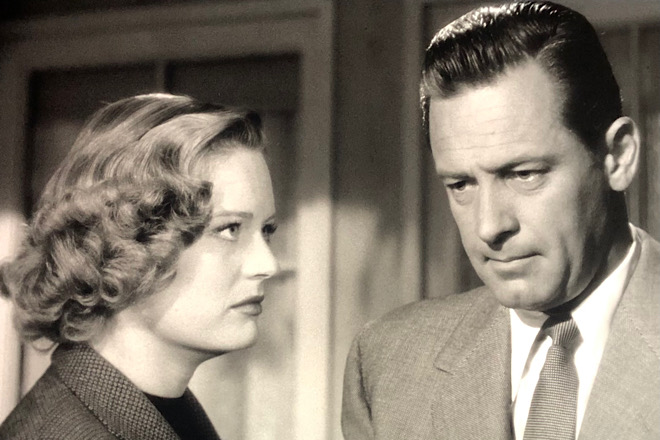 Based loosely on the 1951 hearings conducted by the U.S. Senate Special Committee on Organized Crime and Interstate Commerce, The Turning Point tells its hard-boiled tale in a straightforward, no-nonsense manner that fits the material like a glove. Dieterle, perhaps best known for directing the acclaimed 1939 version of The Hunchback of Notre Dame (which featured O'Brien in his film debut), uses myriad Los Angeles locations to lend the movie a realistic flavor and deftly balances the exciting chase scenes and violent episodes with more cerebral and emotional moments. The simmering sexual tension between Amanda and McKibbon, Conroy's pointed questioning of Eichelberger during a committee hearing, and Matt's heartbreaking speech about why he fell victim to the mob all add essential human, political, and social accents to the surprisingly layered story. Thrills abound as well, but Dieterle makes sure all the pursuits and encounters feel credible.

The script by Warren Duff, who wrote a few James Cagney vehicles in the late 1930s, including Angels with Dirty Faces, which also features the boyhood pal angle between the two protagonists, also rings true, especially in its depiction of newspaperman McKibbon. Unlike other movies that turn reporters into virtual superheroes or paint them as fast-talking wiseasses, The Turning Point allows McKibbon to quietly ply his trade and discover critical information in a (relatively) believable manner. Though not a semi-documentary per se, The Turning Point often takes that tack in its procedural approach to journalism and criminal investigation, and it's stronger for it. 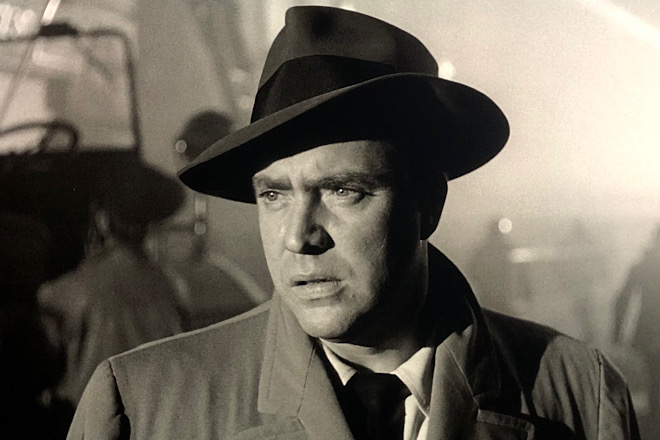 The actors supply additional authenticity through their high-quality performances. From the leads to the minor supporting players, every portrayal is believable...a rarity for a movie with such cut-and-dried good and bad guys. Holden, O'Brien, and Smith create a potent three-way chemistry that drives the narrative and makes it easy for us to become involved in their complex interpersonal dynamics. Holden and O'Brien are especially magnetic; both are disarmingly natural actors who truly inhabit their characters, and though their roles barely tax their considerable talent, they maximize every on-screen moment. Smith's part isn't especially meaty either, but her warmth, sincerity, and unadorned beauty win us over and make us forget the cool, aloof persona Warner Bros cultivated for the actress during her tenure at the studio in the 1940s.

Tully really impresses as the conflicted and guilt-ridden Matt, the always stellar Begley etches another meticulous portrait as the corrupt and sadistic Eichelberger, Neville Brand makes a splash as a hitman who relishes his work, and such reliable character actors as Ted de Corsia, Jay Adler, and Whit Bissell contribute colorful turns as well. The Turning Point also marks the film debut of Carolyn Jones, who grabs attention during her brief bit as a platinum blonde, gold-digging floozy in the Billie Dawn/Born Yesterday vein.

Dieterle packs The Turning Point with memorable scenes, including a shocking mob hit, fiery explosion, breathless chase, and a catwalk climax that predates the iconic finale of The Manchurian Candidate by a decade. (Ironically, cinematographer Lionel Lindon would photograph The Manchurian Candidate as well.) The film's literate screenplay, measured pacing, and no-frills look also enhance its allure, making it difficult to fathom why The Turning Point hasn't enjoyed a loftier reputation over the past seven decades. Though it doesn't scream noir like many of its genre counterparts, this well-made, well-acted, often captivating movie deserves entry into the genre's rarefied club of classic titles. Will the Blu-ray release of this first-rate crime drama prove to be its turning point? I hope so. 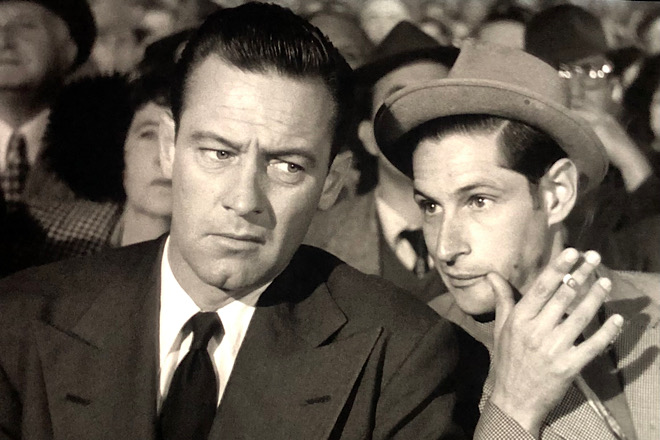 Vital Disc Stats: The Blu-ray
1952's The Turning Point arrives on Blu-ray packaged in a standard case. Video codec is 1080p/AVC MPEG-4 and audio is DTS-HD Master Audio 2.0 mono. Once the disc is inserted into the player, the static menu without music immediately pops up; no previews or promos precede it.

Remastered in HD by Paramount Pictures from a 4K scan of the original 35mm film elements, The Turning Point looks terrific on Blu-ray. The 1080p/AVC MPEG-4 transfer boasts superior clarity, contrast, and grayscale, all of which produce a picture that brims with depth and vibrancy. Rich blacks and bright, stable whites anchor the image, an organic and consistent grain structure preserves the feel of celluloid, and excellent shadow delineation keeps crush at bay. Exterior shots seamlessly blend with studio-lit interiors, highlighting the deft, naturalistic cinematography of Lionel Lindon, who would win an Oscar four years later for Around the World in 80 Days. Razor-sharp close-ups showcase the rugged complexions of Holden and O'Brien, and though the tight shots of Smith appear slightly diffused (a common practice when photographing actresses during Hollywood's Golden Age), they are no less detailed and beautiful. A few nicks and marks still dot the source material, but the print is free of any major, age-related damage. Though I don't own a copy of The Turning Point DVD, I can't imagine this snappy film noir looking any better than it does here. Fans should definitely upgrade.

The Turning Point is one of those movies that foregoes a musical score after the opening credits to heighten realism (it even borrows its main title theme from 1947's Desert Fury, according to film historian Alan K. Rode's commentary), but that doesn't mean the DTS-HD Master Audio 2.0 mono track lacks punch. On the contrary, the sound is often quite vigorous. A massive explosion rocks the room, thanks to thunderous bass, and the resulting firestorm crackles with fury. Gunshots, honking horns, ringing telephones and trolley bells, and footsteps crunching against concrete or clattering across metal catwalks are all crisply rendered, while atmospherics like crowd noise in the boxing arena and the omnipresent din of street noise are wonderfully nuanced. All the dialogue is well prioritized and easy to comprehend, silences are clean, distortion is absent, and no age-related hiss, pops, or crackle intrude. A potent movie requires potent audio and this track certainly delivers in that regard.

Taut, literate, and exciting, The Turning Point provides pulse-pounding entertainment, thanks to William Dieterle's stylish direction and top-notch performances from William Holden, Edmond O'Brien, and Alexis Smith. What might seem on the surface like a just-the-facts-ma'am chronicle of a criminal investigation simmers with underlying passion and moral quandaries, and Kino's first-rate Blu-ray presentation puts us in the thick of the drama. A brand-new 4K master struck from original 35mm elements, excellent audio, and a stellar commentary track heighten the appeal of this underrated film noir that deserves its proper due. Highly Recommended.