Angels with Dirty Faces makes its Blu-ray bow at last, and Warner Archive rewards our patience with a knockout presentation that includes a brand new HD master struck from a 4K scan of the original nitrate camera negative, robust lossless audio, and all the terrific extras from the 2005 DVD. Featuring memorable performances from James Cagney, Pat O'Brien, and Humphrey Bogart, this engrossing, stylish chronicle of childhood tenement pals who take different paths but remain bonded through thick and thin stands as one of the all-time great gangster pictures and deserves a prominent spot on every movie lovers shelf. Must Own.

The plot is simple, yet brilliant. Two boys grow up together in the rough-and-tumble tenements of New York City's Lower East Side. When they're caught trying to steal fountain pens from a railroad boxcar, a police chase ensues. The cops nab one of the boys; the other runs just a bit faster and gets away. The one who is caught gets sent to juvenile detention, where nefarious influences lead him into a life of crime. The one who got away becomes a priest and devotes his life to keeping vulnerable teens on the straight and narrow. The two boys, now men, remain close friends, but despite their best efforts, their divergent paths cause friction, and their passionate commitment to their respective lifestyles threatens to break their abiding bond.

In a nutshell, that's Angels with Dirty Faces, which stands alongside Little Caesar, The Public Enemy, The Roaring Twenties, High Sierra, and White Heat as one of the greatest gangster movies ever made. Not so coincidentally, Warner Bros - the studio that specialized in ripped-from-the-headlines social issue films during Hollywood's Golden Age - produced all those pictures, but Angels with Dirty Faces stands apart. More than most gangster yarns, director Michael Curtiz's riveting film preaches a moralistic message within its violent context that goes far beyond the triteness of "crime doesn't pay." Inoculating impressionable kids against the allure of organized crime and exposing their vulnerability is what Angels with Dirty Faces is all about. That's quite a switch from the gangster glorification films of the early 1930s that spawned real-life criminals like John Dillinger and ushered in a generation of movie censorship. 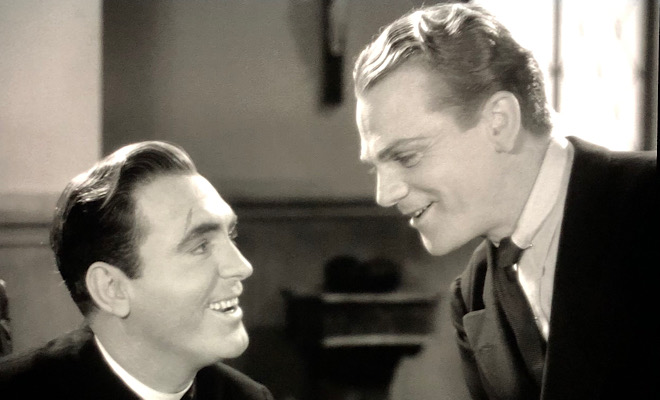 Good guys gone bad is another of the movie's major themes. A penal system that corrupts instead of rehabilitates and a media that sensationalizes and romanticizes crime even as it indicts it play big parts in the story. Rocky Sullivan (James Cagney) may be a hoodlum, but he isn't a bad man like his ruthless, unscrupulous colleagues, James Frazier (Humphrey Bogart) and Mac Keefer (George Bancroft); circumstances merely forced him onto a crooked path and he's ventured too far down it to be redeemed. Rocky maintains his ties to the church, takes a genuine interest in the ragtag group of teen boys in the parish of his lifelong pal Father Jerry Connolly (Pat O'Brien), and upholds a code of honor within the illicit confines of his criminal circle. Though a heavenly aura often surrounds Father Connolly as he tirelessly fights society's evil influences, Rocky is the movie's undisputed hero, and while the boys are warned against idolizing this larger-than-life figure, it's tough for us as viewers not to be seduced by his charisma and glamor.

Curtiz, though, masterfully hammers home the movie's core points in one of the most memorable climaxes in Hollywood history. In lesser hands, the finale could adopt a schmaltzy, pat, hackneyed tone, but Curtiz, Cagney, and O'Brien infuse it with such honesty and truth, it feels utterly authentic. Despite the passage of more than 80 years, the purity of emotion and simple, sincere expression of ideas still provoke a visceral response, perhaps because the issues the film addresses remain relevant today. Celebrity worship, media manipulation, peer pressure, gang activity, and a broken social and legal system that seems to perpetuate crime still pervade our culture (maybe even more so now than then) and can easily lead our youth astray. 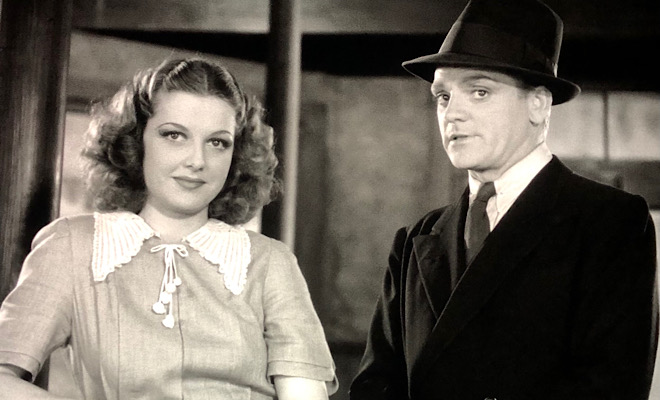 Substance aside, Angels with Dirty Faces is just a damn good movie. Taut, well-paced, packed with action and atmosphere, punctuated by snappy dialogue, and brimming with emotion, the film moves like a bullet train. Curtiz's seamless, deceptively artistic direction keeps the eye engaged, the script rarely resorts to clichéd speech patterns, and the performances all hold up.

Cagney justly earned his first Oscar nomination for his riveting portrayal of Rocky, adding dimension, complexity, and humanity to what could have been a cardboard role. The subtle tics he brings to part - like the jerking and hunching of his shoulders that would be forever imitated afterward - beautifully shade his character and augment his natural magnetism. He and O'Brien made several films together, and their comfortable rapport produces a believable on-screen friendship. Cagney of course overshadows O'Brien, but the journeyman actor holds his own with the pint-sized dynamo, filling an understated, sincere portrayal that tugs the heartstrings during the climax. As a priest, O'Brien is no Spencer Tracy (who would win the Oscar that year for playing one in Boys Town), but he's strong, stoic, and believable in a part that's trickier than it looks. 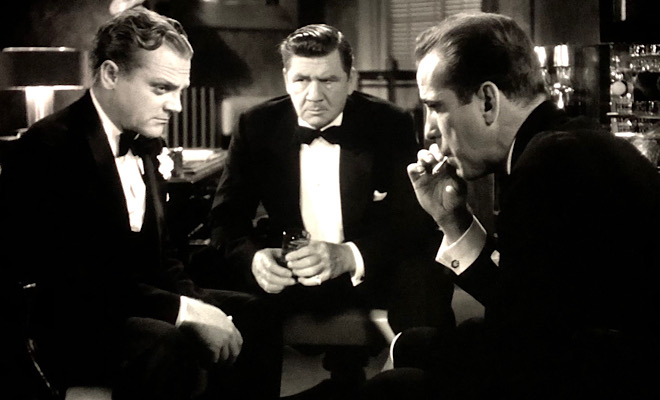 Bogart was not yet a full-fledged star when he made Angels with Dirty Faces and often griped about being typecast as a heavy, but few actors could get more mileage out of a slimy, double-crossing thug than he. Here he plays Jim Frazier, a crooked lawyer who convinces Rocky to take the rap for a robbery so the police won't confiscate the stolen $100 grand, but when Rocky tries to claim the cash upon his release, Jim repeatedly puts him off, setting up a tense, deadly game of cat and mouse that leads to a memorable showdown. Bogart maximizes his limited screen time, mixing toughness with a jittery unease that makes his supporting character almost as interesting as the leads.

In other pivotal roles, "Oomph Girl" Ann Sheridan, a much better actress than her vampy nickname suggests, also makes a splash in her first important role as Rocky's heart-of-gold girlfriend; Cagney doppelgänger Frankie Burke nails his portrayal of the teenage Rocky, perfectly imitating Cagney's voice and mannerisms; and before they became a caricature as The Bowery Boys, the Dead End Kids supply plenty of streetwise pugnacity as the scruffy, aimless teens who worship Rocky and strive to emulate him. The troupe of colorful young actors that included Billy Halop, Bobby Jordan, Leo Gorcey, and Huntz Hall got their name after appearing in the stage and screen versions of Dead End, and their lively performances in Angels with Dirty Faces add youthful vigor and topical relevance to the film. (Sheridan and the boys would reunite for a follow-up drama, Angels Wash Their Faces, the following year.) 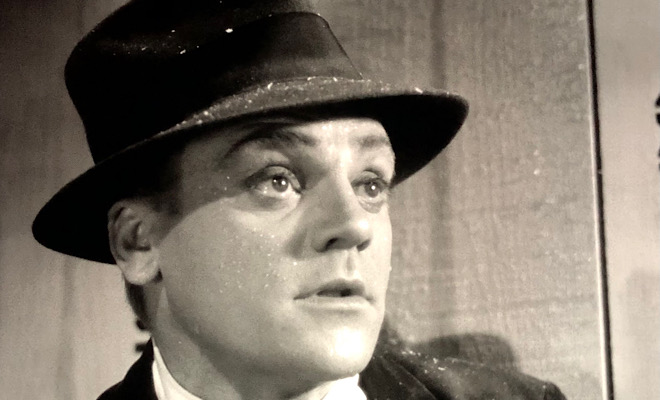 Angels with Dirty Faces isn't just a quintessential gangster film, it's a quintessential Warner Bros film. Not only does this crackling drama flaunt the tough, gritty, economical style that defined the studio during the 1930s, the cast and crew list comprises a veritable who's-who of Warner's top personnel. In addition to such Warner workhorses as Curtiz, Cagney, O'Brien, Bogart, and Sheridan, there's Sol Polito's cinematography, Max Steiner's music, Orry-Kelly's costumes, and Perc Westmore's makeup, all of which combine to create an expertly crafted and defining work.

In all, Angels with Dirty Faces earned three well-deserved Oscar nominations for Best Actor, Best Director, and Best Writing, Original Story. (Curtiz was a a double nominee that year, also nabbing a nod for helming the domestic drama Four Daughters.) It may be 80-odd years old, but thanks to Curtiz, Cagney, and company, it remains a thrilling, moving, relatable film, an insightful study of an imperfect society, and a textbook example of Golden Age moviemaking at its best. 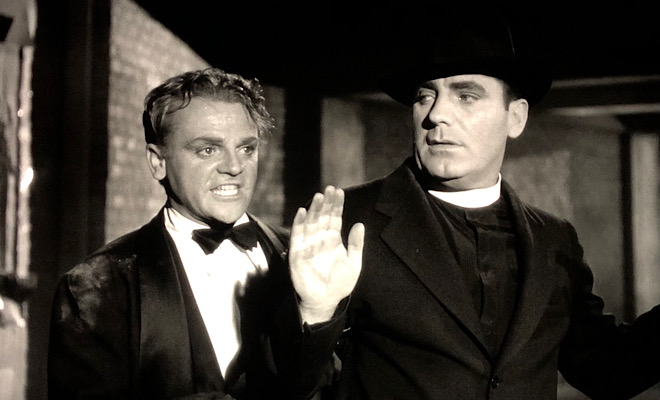 Vital Disc Stats: The Blu-ray
Angels with Dirty Faces arrives on Blu-ray packaged in a standard case. Video codec is 1080p/AVC MPEG-4 and audio is DTS-HD Master Audio 2.0 mono. Once the disc is inserted into the player, the static menu without music immediately pops up; no previews or promos precede it.

A new HD master struck from a 4K scan of the original nitrate camera negative yields a dazzling 1080p/AVC MPEG-4 transfer that makes this 83-year-old film look almost brand new. Beautifully resolved grain produces a silky smooth picture that maintains the feel of celluloid, while excellent clarity, contrast, and grayscale highlight background details and enhance depth. Inky blacks lend the image an elegant look, O'Brien's white clerical collar never blooms, and marvelous shadow delineation heightens the tense underworld atmosphere. Dissolves and montages are sharp, as are the wealth of close-ups that showcase the scar above O'Brien's eye, Cagney's rugged complexion, glistening sweat, and Sheridan's palpable allure. (In the climactic scene, the single tear that forms at the edge of O'Brien's right eye is crystal clear.) A couple of shots appear a tad soft and a few errant specks dot the otherwise pristine source material, but such minor faults can't dull the overall brilliance of this terrific remastered transfer.

The DTS-HD Master Audio 2.0 mono track maximizes the impact of all the de rigueur sound effects of classic gangster films - the staccato bursts of gunfire, screaming sirens, piercing police whistles, and honking car horns - but also nicely handles such subtleties as footsteps crunching against concrete and cityscape atmospherics. A wide dynamic scale handles all the highs and lows of Max Steiner's dramatic music score without any distortion, and no age-related hiss, pops, or crackle intrude. Early in the film, some of the dialogue sounds a bit muffled, making a few exchanges difficult to comprehend (the young Rocky also garbles many of his lines, which doesn't help), but that's the only hiccup in an otherwise stellar audio presentation.

All the extras from the 2005 DVD have been ported over to this Blu-ray release, and it's quite a bounty of material.

One of the greatest gangster pictures of all time at last comes to Blu-ray and it's well worth the wait. With grit and grace, Angels with Dirty Faces tells a substantive, timeless story, thanks to Michael Curtiz's muscular direction and top-notch performances from James Cagney, Pat O'Brien, Humphrey Bogart, and Ann Sheridan. Warner Archive honors this unforgettable classic with a brand new HD master struck from a 4K scan of the original nitrate camera negative, solid lossless audio, and all the bountiful extras from the 2005 DVD. No collection of Golden Age classics is complete without this blistering and emotionally affecting crime drama. Must Own.