Voyage of the Rock Aliens

An ‘80s-soaked romantic comedy about a group of aliens in a guitar-shaped spaceship on a quest to find the source of rock n’ roll sounds far out, right? With its silly hijinks and radical outfits, what’s not to love? Um, well, just about everything. While one can always appreciate Vinegar Syndrome’s dedication to dusting off forgotten films and giving them well-restored spit shines, sometimes these movies deserve the dark side of the moon. 1984’s Voyage of the Rock Aliens is a total misfire. For Fans Only

First, let’s judge this book by its cover. The Blu-ray art features a robot hand holding a polaroid portrait of a rock-tastic couple (a very Vanilla Ice-looking Craig Sheffer of Nightbreed fame and a Cyndi Lauper-like Pia Zadora of 1988’s Hairspray). It’s admittedly a rad image that has the power to immediately tractor-beam you in and desire to see what it’s all about. The synopsis on the back cover may further fasten your seatbelt for what should be a fun time. It’s all seemingly here. However, to this critic’s dismay, the loose narrative structure, poor characterization, bad songs and dances, and overall lack of, uh, brains march to a drum without a beat.

Directed by Every Which Way but Loose’s James Fargo, Voyage of the Rock Aliens is about alien rockers searching for the true source of rock n’ roll. (Imagine the otherworldly misfits from Critters or Dude, Where’s My Car? dropped into a Streets of Fire-and-Grease-wannabe movie with an MTV obsession.) While floating through space, some former plastic toys (?) turn into techno-pop alien dudes and pay a visit to teenage earthlings DeeDee (Zadora) and her boyfriend Frankie (Sheffer). Each of them is trying to become the top rocker in their small town of Speelburgh. Fargo worked with Steven Spielberg on Jaws. But something tells me the tribute is one Spielberg doesn’t put on his top-shelf. From here, musical mayhem ensues, and it’s a series of nonsensical music videos barely stitched together with some humorless and charmless padding.

Look, I’m all for movies getting silly if they have the proper components to keep you engaged, such as a compelling story, exciting characters, and good energy. But when you’re watching an adult version of Barney where nobody produces a smile, memorable tune (for the most part) or learn-worthy dances, why bother? On top of that, Vinegar Syndrome doesn’t soften the blow by adding a funny commentary track. This is a movie made for a Mystery Science Theater 3000 or Master Pancake treatment, and it’s a seriously missed opportunity that some rowdy fun-poking does not accompany it. 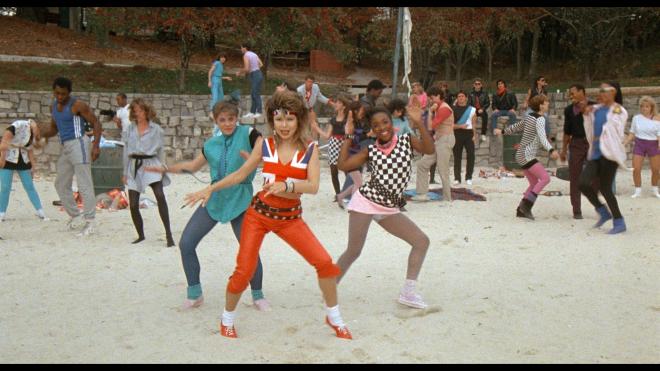 The theme song by Zadora and Jermaine Jackson, titled “When the Rain Begins to Fall,” should be awarded minor points. It’s the one solid, catchy track. There’s also an excellent out-of-left-field Scientology jab that should have you cracking up for minutes. And Michael Berryman’s facial expressions have some value as well. But, sadly, nothing sticks around long enough to keep you locked in from beginning to end. It’s dry viewing and a chore to sit through. So, don’t plug into it.

Vital Disc Stats: The Blu-ray
The now-available Blu-ray release is housed inside a cardboard slipcover and a clear plastic casing with reversible cover art. The reversed side is essentially the same look, with only some added animated snapshots from the film to better sell its cocktail of absurdity.

Vinegar Syndrome presents Voyage of the Rock Aliens in a brand new 2K restoration from its 35mm interpositive (in a 1.85:1 aspect ratio). Colors are immediately striking, with the feature bouncing around from beach settings to diner and bathroom interiors. In addition, it offers sharp signage and fabric textures (like DeeDee’s hip Brit outfit). 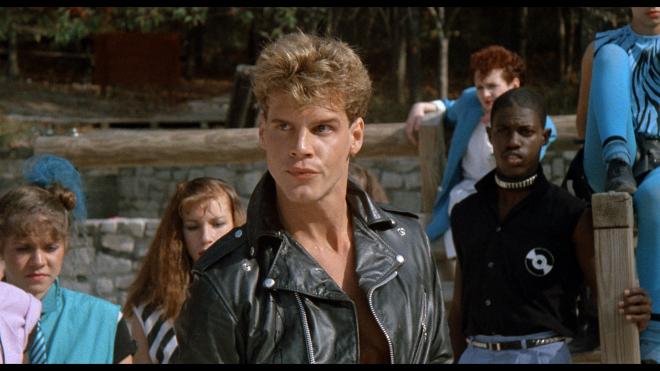 You can sometimes see the actors’ sweat rolling off their faces and onto their getups. (Look out for Frankie’s leather jacket that he rocks when it looks 100 degrees outside.) Skin tones are natural amid the cool, smokey haze that punches up the cinematic quality. Grain is fine and film-like.

Some wide shots are super soft, but that’s the camera and not Vinegar Syndrome’s doing. This is about as polished as a crappy movie from the ‘80s gets. Not even some of the most celebrated films around look this good.

The DTS-HD Master Audio sound mix can be slightly uneven as it switches from a musical number to standard dialogue. It’s clear the production isn’t working with superior equipment. However, nothing is ever unintelligible enough to mark the card 0. Dialogue exchanges remain accessible even when Berryman’s character fires up his chainsaw and when characters are in group settings, such as the diner. The sound effects are very direct. Unfortunately, you’ll have to deal with the film’s creative decision/annoyance of using Halloween 5-like sound effects throughout, like banana peel slips and bonks. Ugh.

While it’s impressive that Vinegar Syndrome wrangled together some talent for a new feature-length making-of, it’s poorly put together. The cuts between talking-head interviews are so random without any sense of flow. One moment you’ll be engaged with a filmmaker talking about some of the FX work or their personal role in the film’s making, and then it will cut to another discussion that’s not even thematically close to what was said in the last interview. Sometimes, it seems to cut off mid-sentence, like when Berryman is talking about his love for chainsaws. And speaking of Berryman, the editor of this making-of feature crossfades over to The Hills Have Eyes poster like five times. I don’t know if it’s a self-pat on the back to say, “Hey, we have an icon here,” or what, but it’s an eyesore. Some of the content explored by the talent is good, though, especially toward the end when the filmmakers get more candid about the film’s release issues. 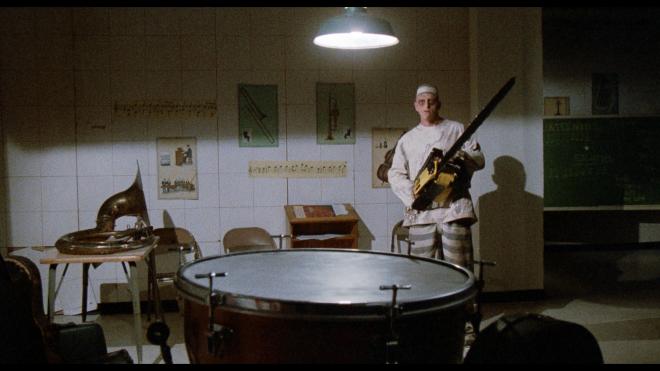 The one redeeming special feature is a reunion with the film’s alien band, portrayed by real rock group Rhema. Rather than speak diplomatically, the actors/musicians are open books who constantly make fun of themselves and the movie. A highlight is when they say one of the best days of their lives was when they attended a special, rowdy screening of the movie where the audience could supply their own commentary track. The Rhema band members are also great speakers. The editor of this featurette knew it because they had fun with the assembly here.

A lot went into trying to make this rock opera fly. But it didn’t know what it wanted to be, and that uncertainty shows everywhere. Vinegar Syndrome does its best to make it sparkle with its state-of-the-art A/V work, but it doesn’t discount the fact that the movie is an absolute dribble without any of the kicks to make it worthwhile. It might be worth a look for the curious but ultimately it's For Fans Only