Have you ever watched a movie by yourself and didn’t enjoy it but later gave it a second go with some rowdy friends and totally clicked with it? It’s a rare occurrence, but it tends to happen with deliberately dumb movies. One such example is MVD Rewind Collection’s Blu-ray release of the 1987 comedy Dirty Laundry, starring a few low-key talents and a slew of music icons. Honestly, there aren’t too many movies more moronic than this one. Its premise and looney behavior are junkier than McDonald’s food. That said, if you accompany yourself with the right people and maybe even a little liquid fun, this Big Mac-sized senseless chuckler may lead to one of your most memorable nights in quite some time. Worth A Look!

During MVD Rewind Collection’s Blu-ray audio commentary, there's a moment when the Hack the Movies crew (featuring Tony Piluso, Newt Wallen and Crystal Quinn) call Dirty Laundry an “‘80s boner-jam version of No Country for Old Men.” I don’t think a more perfect description could ever exist for this movie. So, I’m not even going to attempt to top it because that’s exactly what it is. It’s got the cat-and-mouse story structure plastered with all the IQ-dropping dialogue and ‘80s gunk one could ever dream up. Dirty Laundry will live or die for you based on your sense of humor, which is why I strongly suggest saving this for a stupid movie watch party – one where you can add your own commentary track. Otherwise, you may pop this in and later use the movie disc as a coaster for your morning coffee.

The plot is definitely built for laughter. It’s got that classic comedy setup where a dude (Leigh McCloskey of 1980’s Inferno) gets pulled into an extreme situation involving drug money and goes toe-to-toe with some nasty people (Darkman’s Nicholas Worth and - wouldn’t you believe it - Frankie Valli and Sonny Bono) alongside a young, attractive woman (Jeanne O'Brien). So, whether or not the central characters end up with the stolen goods, expect a lot of horn dogs doing a lot of stupid stuff. (Make a game out of how many times you exclaim “what” or “why” at your TV. It’ll be fun!)

So, yeah. Frankie Valli and Sonny Bono are in this, and their commitment (or lack thereof) to their mobster parts is genuinely funny. Early on, there’s a scene with Sonny Bono where he transports drugs stored away in (you guessed it) a dirty laundry bag. How he walks around with the drugs is about as suspicious as a murder happening in broad daylight. Scooby-Doo and the Mystery Gang would sniff him out in seconds.

But more glorious than Sonny Bono’s contribution is Nicolas Worth’s antagonist role as Vito – our Anton Chigurh, if you will. Instead of Javier Bardem’s killer hairdo, Vito sports a Vin Diesel look. He’s also a damn-the-consequences type who shoots first and asks questions later. My biggest laugh happened when Vito spots the kid who snagged the drug money from afar at a hair metal concert. Rather than quietly make his way over to him, he shoots his pistol across the crowd. However, that sequence only butters you for an even more ridiculous one involving Vito taking directions from two parrots.

That should be enough to paint a picture of what you’re in for, but I’m definitely protecting the best and most head scratching bits. No amount of warning could prepare you for how stupid and tonally messy this movie truly is. Seriously, it feels like it was directed by a different filmmaker each scene. The performances are fantastically horrendous, with actors obviously waiting for their cues to speak rather than engaging in any sort of natural dialogue.

So, if you can’t wrangle a team of your own to enjoy this with, turn on the aforementioned commentary track (with all its Mystery Science Theater energy) and allow Dirty Laundry to wash your intelligence clean. It’s a gas.

Dirty Laundry is pulled out of the cinematic wastebasket and cycled through the MVD Rewind Collection’s retro spin. It arrives on Blu-ray for the first time and gets that classic MVD polish that fits in with the 32 other titles in its catalog of cult movies.

Switching it up ever so slightly, this particular Blu-ray is housed inside a black plastic case. Previously released MVD movies were made with clear or blue cases. This is most likely due to the supply available during the packaging process. So, if that inconsistency bothers you, head to eBay to purchase a case that jells with the others. (Personally, I like the adventure of thinking about what was going on during its creative and manufacturing phases. So, blue, black, or clear – not a problem. It’s part of the thrill.)

The real draw is the cover artwork, available on both the Blu-ray case and the cardboard slipcover (if you’re lucky enough to get it). Illustrator David E. Wilkinson is an incredible talent who perfectly captures the feel of the VHS tape days. For example, the Dirty Laundry cover looks like a Police Academy movie or “...And I Love New York” poster. The wackiness and dirtiness are definitely on display here just like the original VHS cover.

The cherries on top are the sun-scorched yellow tint and worn VHS aesthetics (a ripped corner to reveal a tape inside and video store stickers to inform the customer of its presentation and genre). That’s the good stuff that hits longtime collectors and tape heads right in the heart. It’s beautiful work. And good news, if you really love the art, pin the included folded poster on your wall.

The artwork is not reversible like other MVD titles, but the disc itself continues the VHS look. Dirty Laundry marks the first release in the label’s lineup that doesn’t use a plain white disc with the film’s title printed across it. It seems as though this nice touch will continue as long as the Rewind Collection keeps dusting off movies and repackaging them as new. 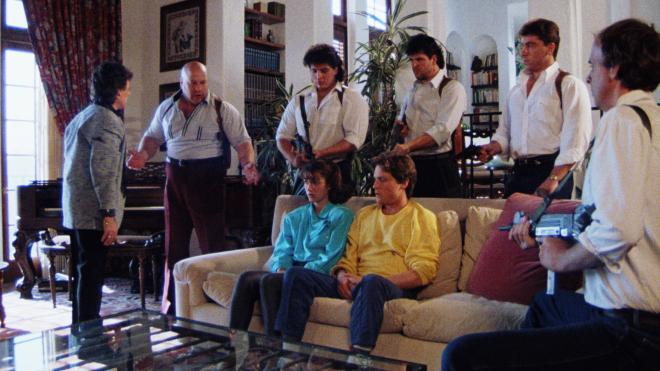 "Trouble seems to be following you around. You must have been born under an unlucky star." — "No, but I was conceived in a drive-in during a Bruce Lee film. Does that count?"

The movie is presented in high definition (1080p) in a 1:78:1 aspect ratio. Unfortunately, the specs on the back cover do not clearly indicate where this restoration comes from. But if you follow the breadcrumbs (i.e., the end credits and the film’s 2019 4K trailer), it’ll lead you to Multicom Entertainment Group, Inc.

Multicom’s picture polishing detail is solidly executed throughout the viewing experience, presenting some distinct facial surfaces, night light glows, and colorful ‘80s pops (especially Sonny Bono’s satin jackets). The California locations are dimensional enough, showcasing the streets and buildings as the main chase carries from the music venue to a karate dojo and back alleys. There are many long takes for set decoration to be open for study. (Look out for a dance club where an eccentric couple fight in the background as the two leads have a conversation in the foreground.) At times, the color can appear faded in lighter scenes, while darker ones see a lot of grainy spots. But considering the low budget quality and what kind of movie it is, the lack of crispness is appropriate.

The movie features an LPCM 2.0 Mono track that blows the video quality out of the water. The mix delivers sharp dialogue exchanges that secure the wildly different acting styles of the talent. The only poorly rendered sequence that I can recall that needed some extra attention is the concert sequence. The music level is distractingly low and far from what a concert would sound like. However, it’s short enough that it won’t grind your gears too much.

The supplemental material is light but insightful and amusing – and they just so happen to be new and not previously released.

Dirty Laundry is the kind of flick that would get a single-digit score on Rotten Tomatoes nowadays. It’s possible to walk out of it feeling like you just experienced a massive waste of time. My wife certainly tuned out very quickly when we watched it without the commentary track. But when we turned it on, we both shared many, many laughs. So, it’s also possible to land on the other end. Fortunately enough for collectors, the price of purchasing the MVD Rewind Collection Blu-ray is relatively affordable, and it comes with all the bells and whistles of the video store days to slap a smile on your face.