Boone (Craig Sheffer) may be a troubled young man, but his troubles are just beginning. Set up as the fall guy in a string of slasher murders, he decides he'll hide by crossing the threshold that separates “us” from “them” and sneak into the forbidden subterranean realm of Midian. Boone will live among the monsters. Hellraiser creator Clive Barker writes (adapting his novel Cabal) and directs this vivid leap into horror that asks: in the battle of man vs. monster, who's really the monster? The answer supplies flesh-crawling suspense, sudden fear, a colorful Danny Elfman score and a creepy array of shape-shifting beings. They are the Nightbreed, denizens of a world beyond death, beyond the imagination, perhaps beyond anything you've seen.

I still remember the day driving with friends to a theater to see 'Nightbreed' on opening weekend. We were hungry horror-hounds practically devouring every scary monster picture hitting the multiplex. There was something interesting going on with the genre during these years — from 1988 through the early 1990s — where filmmakers were at their most creative and fantastical with genuine attempts at originality and a break from the franchise sequels that were sadly becoming the norm. This was the time of 'Brain Dead,' 'Hardware,' '976-Evil,' 'Body Parts,' 'Graveyard Shift,' 'Jacob's Ladder,' 'Misery,' 'Pet Sematary,' 'Tremors,' 'Candyman,' 'Shocker,' 'Dead Alive,' 'Dellamorte Dellamore,' 'The People Under the Stairs,' 'Pumpkinhead,' and so many more. Granted, many of the flicks from this period were not particularly good or worthwhile, but they were oddly memorable for those with an appetite for horror.

'Nightbreed' was one such creature-feature which unfortunately fits perfectly in that description — wildly inventive and extravagantly imaginative but also somewhat on the bad side. In fact, several moments, especially in the first act and going into the second, are a jumbled narrative mess. It may be coherent, but it still seems sloppily put together. Nonetheless, the story of an average Joe having nightmares about an underground city of monsters left enough of an impression at that age to haunt my dreams and feel remarkable for the time. Years later, revisiting the movie at home, I was sorely disappointed to find my memories of it had completely misled me. Craig Sheffer's tough-guy softie Aaron Boone is a corny stock character who never gives audiences a genuine reason to see him as the story's over-the-top altruistic hero. As the protagonist, the "hooligan with a heart of gold" is a nice change, but it's obvious from the start that his benevolence will serve a higher purpose later on. 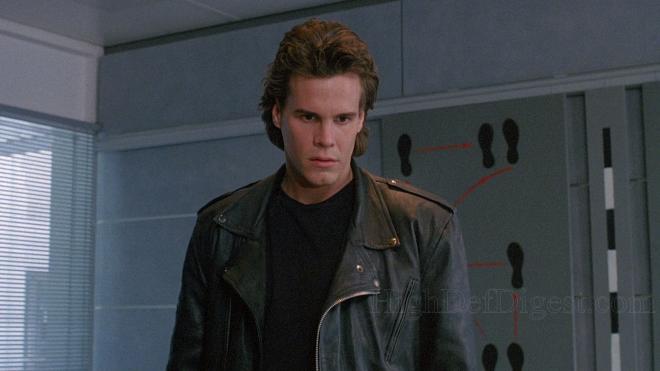 Regrettably, the filmmakers mount on the corniness and surround Boone with even more tired, banal characters. This, of course, simply refers to the humans because frankly, the only aspect of the production of real, genuine interest is the outcast monsters themselves. Ignoring the police captain, whose sole purpose is providing silly comic-relief, and Detective Joyce (Hugh Quarshie), adding minor purpose to the plot, the remaining "normals" are those closest to our reluctant hero. Anne Bobby is Lori, the typical heartbroken girlfriend who mawkishly if not stupidly runs towards trouble. David Cronenberg is wooden and bored as Boone's demented therapist, Dr. Philip K. Decker, an obvious reference to the legendary sci-fi author. The caste of monsters living in Midian, however, are the most interesting, yet sadly, they, too, fall short and into the banal. Stunning, wildly fanciful makeup effects can't save the nightmarish creatures from some rather prosaic personalities and relatively uninspiring melodrama.

By this point, readers are likely wondering about the negative tone of the above given that I'm a fan — not only of the film but also of Clive Barker himself. So, to some extent fandom and nostalgia play a role, but my sustained enjoyment, why I continue to watch it, is at least due to the film's inventive style and its treatment of monsters as the good guys, making the prejudiced, intolerant humans the real ogres. Furthermore, the film's badness is not-so-surprisingly due to tampering from confused studio heads, forcing the very edits and cuts that make the storyline feel rushed and sloppy. Based on a his short novella Cabal, writer and director Barker had the opportunity to piece together a longer 145-minute bootleg version, known as the "Cabal Cut," amassing a large, appreciative cult following. More recently, Shout! Factory gave the macabre gothic horror author the chance of bringing the film to his unique vision using original archived elements.

This new 120-minute "Director's Cut" doesn't improve much aside from the pacing, editing and character development, though it does make for better viewing experience. Although it's still a bit on the corny side, 'Nightbreed' manages to entertain with phantasmagoric visuals, inventive makeup effects, fantastical stage production and a plot that reveals real monsters dwell within the darkest corners of human prejudice and intolerance.

Shout! Factory offers two Blu-ray choices of 'Nightbreed' under the distributor's Scream Factory line, both featuring "The Director's Cut" version of the cult film. The first is a combo pack with a few of the same special features while a "Limited Edition" comes with both versions and bonus supplements. The latter, which is under review here, is a Region A locked, three-disc set (two BD50s and one BD25) spread across two standard blue keepcases. They are joined by a 38-page, color photo booklet with an essay on the history of the film by Mark Alan Miller and contained inside a handsome, sturdy box. "The Director's Cut" disc opens with a short, 6-min introduction by Miller and Clive Barker before switching to a menu screen with the usual options, full-motion clips and music.

The nightmarish monsters of Midian are unleashed unto Blu-ray with a notable and rather exceptional 1080p/AVC MPEG-4 encode. Although there are a couple minor differences between the two versions (the theatrical comes from an inter-positive while the director's cut is from original camera negatives), both look fantastic, given their production, history and the condition of the elements.

Presented in a 1.78:1 aspect ratio, the video is awash with a very thin and consistent layer of natural grain, giving the image a much welcomed and appreciable film-like appearance. Although somewhat brighter than I remember it, contrast is well-balanced with clean, crisp whites throughout, allowing for excellent visibility into the far distance. Brightness levels are equally outstanding, showing lots of deep, penetrating shadows that never obscure the finer details. A couple moments, however, blacks can seem a tad murky. Colors are accurate and cleanly-rendered with primaries looking particularly rich and bold. Flesh tones appear healthy with lots of visible textures and great complexions. Although there are a few instances of mild softness, the overall high-def transfer is very detailed with distinct fine lines in clothing, the special makeup effects and the production design.

The cult horror fantasy roars and shrieks to home theaters with a first-rate DTS-HD Master Audio soundtrack — a significant improvement over previous editions made from the original elements. Even though both versions offer excellent stereo tracks, the longer cut comes with a 5.1 upmix that while mostly good is not really all that satisfying. Rears are employed amusingly well with decent directionality, but at times, also feel artificial and forced — and the same goes for the bass. Furthermore, vocals come in at a lower decibel level, making a few conversations a tad difficult to make out.

The preferred listening option is definitely the lossless stereo mix because it's more faithful to the original design. Imaging is very broad and full of warmth with lots of convincing off-screen effects and excellent balance between the channels. Danny Elfman's score displays superb separation in the orchestration thanks to a detailed and surprisingly extensive dynamic range, exhibiting sharp mids and very pleasing, room-penetrating highs. Dialogue reproduction is superb with crystal-clear intonation and clarity in every conversation and interaction. Low bass is not as prominent, but it's adequate and feels better overall with satisfying weight.

Thanks to studio meddling, Clive Barker's 'Nightbreed' became a financial and critical flop, except for those impressionable minds of young horror-hounds. Thankfully, a very strong cult following has kept the horror fantasy alive, making possible for restoring it to the filmmakers' original vision. The Blu-ray from Scream Factory offers the "Director's Cut" for the first time with an exceptional audio and video presentation. It includes a wealth of supplements that make this package worthwhile for cult enthusiasts.

Sale Price 110.28
Buy Now
3rd Party 110.28
In Stock.
See what people are saying about this story or others
See Comments in Forum
Previous Next
Pre-Orders
Tomorrow's latest releases