David Lynch and comedy make an uneasy combination. Although many of the director’s best works are filled with quite effective, offbeat humor, his few attempts to tackle the comedy genre directly (such as his 1988 short film ‘The Cowboy and the Frenchman’) have mostly been disasters. Lynch himself attributes this to his fondness for jokes and situations that are “very absurd and really stupid. I love that combo, but apparently nobody else does!”* Nevertheless, after their TV show ‘Twin Peaks’ imploded in its second season, Lynch and co-creator Mark Frost found themselves pitching a half-hour comedy series called ‘On the Air’ to the network bosses at ABC. Yes, David Lynch actually made a sitcom. The fact that such a thing exists at all is perhaps the most surreal development in the filmmaker’s entire career.

“Welcome to the big world of the small screen.”

Set in 1957, ‘On the Air’ follows the zany exploits of the cast and crew of ‘The Lester Guy Show’, a live variety program on the Zoblotnick Broadcasting Corporation. Main characters include the show’s host Lester Guy (Ian Buchanan), dim bulb ingénue Betty Hudson (Marla Rubinoff), perpetually angry network president Bud Budwaller (Miguel Ferrer), the foreign director with an impenetrable accent Vladja Gochktch (David “Squiggy” Lander), and Gochktch’s impossibly nice and sunny assistant/translator Ruth Trueworthy (Nancye Ferguson). In the background are a host of oddballs such as the nerve-wracked producer, the conjoined “Hurry-Up Twins,” and sound effects man Blinky Watts (Tracey Walter from ‘Reno 911!’). The latter suffers from something called “Bozeman’s Simplex,” which causes him to see 25.62 times more visual information than a normal person sees. This is usually illustrated with wacky split-screen effects where dogs and baby dolls and ice cream cones and other random images repeat in a loop on top of whatever he’s looking at.

The pilot episode establishes the premise. Washed-up movie star Lester struggles to make the undignified transition to television. In the lead-up to the premiere of his show, a chain reaction of outrageous events causes everything to go disastrously wrong live on air, culminating in Lester, dangling upside down from the ceiling rafters, dipped head-first into a bowl of dog food. Inexplicably, this train wreck is so bizarre and compelling that audiences can’t get enough of it. The show is a big hit. Later episodes repeat some variation on this formula.

The cast tries really hard. Buchanan, Ferrer and Lander all had recurring roles on ‘Twin Peaks’. A later episode features an appearance by Lynch regular Freddie Jones (‘The Elephant Man’, ‘Dune’, ‘Wild at Heart’). Many of the supporting players have recognizable faces you’ve seen in movies or TV. (Blinky’s partner played Benny the Martian cabbie in ‘Total Recall’, for example.) Most of these are seasoned pros. Both of the female leads are pretty funny and appealing, for the material they’ve been given.

The first episode, directed by Lynch, is legitimately funny. It holds up much better as a self-contained piece than I’d expected. The writing is clever, the dialogue is sharp, and most of the gags work pretty well. The show also has terrific music (by Angelo Badalamenti, of course) and production design.

Unfortunately, the second episode experiences a steep drop-off in quality that leads to a steady downhill decline. After the pilot, Lynch stepped away and left the show in the hands of Mark Frost and his ‘Fire Walk With Me’ co-writer Robert Engels. The gags become forced, the jokes strained, and scenes are overly reliant on goofy sound effects to sell punchlines. Worse, the episodes after the pilot grow increasingly boring and lazy.

Things marginally pick up during the final episode, in which a group of goofy Beatniks invade the TV studio. Lynch returned to script (but not direct) that one. I wouldn’t say that the finale is funny, per se, but it’s slathered in Lynch’s sensibility and is incredibly strange, watchably so. That’s more than I can say for the middle batch of episodes. The show’s very last image is of a dog wearing sunglasses and playing the bongos. 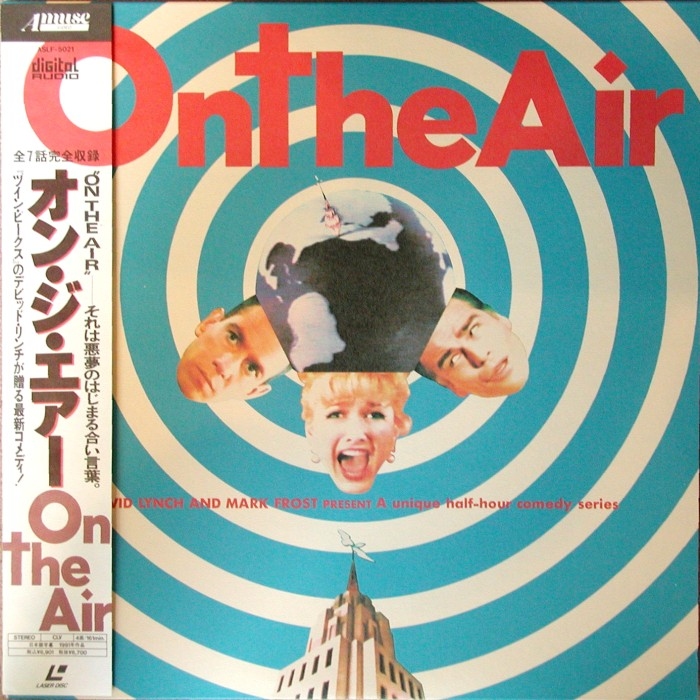 Seven episodes were produced in all. Only three of them aired in the summer of 1992. *Lynch explains: “During that time everything was going belly up with Twin Peaks, and there wasn’t any support from ABC for this show at all. They really hated it.” The fact that the series, as a whole, wasn’t particularly good probably didn’t help matters. It is, however, a fascinating detour in the path of David Lynch’s career.

The complete seven-episode run of ‘On the Air’ was released on VHS back in the day. Although some online searching might yield references to a DVD collection, as far as I can tell, those discs are bootlegs sourced from the old tapes or, in a best case scenario, from the Japanese Laserdisc edition. I own and watched the Laserdiscs. While the picture quality might be better than VHS, it’s not very good in any objective sense. The 4:3 image is soft and noisy, and the oversaturated colors frequently bleed. The second episode is the worst, and looks like it came from an overly-contrasty dupe print.

All of the episodes also have permanent Japanese subtitles in the frame. Honestly, that’s probably the least distracting thing about the Laserdiscs. Assuming that (like me) you’re not familiar with the Japanese language, these strange-shaped symbols at the bottom of the screen seem perfectly fitting with the show’s cluttered visuals and surreal atmosphere. (Most episodes feature unexplained voiceover announcements at random moments.) The two-disc LD set came in a very attractive gatefold jacket that’s reason enough to own it as a collectible. Even if I don’t love the show, the completist side of me is glad to have it.

*Both David Lynch quotes are found in the 1997 interview book ‘Lynch on Lynch‘, edited by Chris Rodley.