An early British rarity from Alfred Hitchcock, Rich and Strange takes a darkly comic look at a nouveau riche married couple who get more adventure than they bargain for on a world cruise. Style trumps substance in this inventively filmed yet disjointed motion picture that's been given a stunning 4K restoration by the British Film Institute. Kino's stellar Blu-ray presentation honors this curious comedy that shows off Hitchcock's developing artistry, but never gels quite as it should. Worth a Look.

Aptly titled, Alfred Hitchcock's Rich and Strange is rich with artistic innovation and directorial bravado, but its narrative is often very, very strange. The result is a fascinating, occasionally captivating, but ultimately bizarre film experience that gets under the skin, but doesn't make much sense. Like a disjointed dream - or nightmare - the movie flits from one quirky episode to another, with Hitchcock's dazzling style the only sustaining thread.

The Master of Suspense takes a break from the thriller motif for this seriocomic early British talkie about young marrieds at sea, literally and figuratively. The change of pace is as refreshing as an ocean breeze at first, but the meandering plot, which Hitchcock and his wife Alma Reville adapted from a novel by Australian writer Dale Collins, soon slows down the film. Reportedly, the Hitchcocks embellished the tale with elements drawn from their own experiences on their honeymoon and a recent world cruise, but the obtuseness of it all lends Rich and Strange the feeling of an inside joke that's hilariously funny to those in-the-know, but baffling to those of us who don't have a clue. 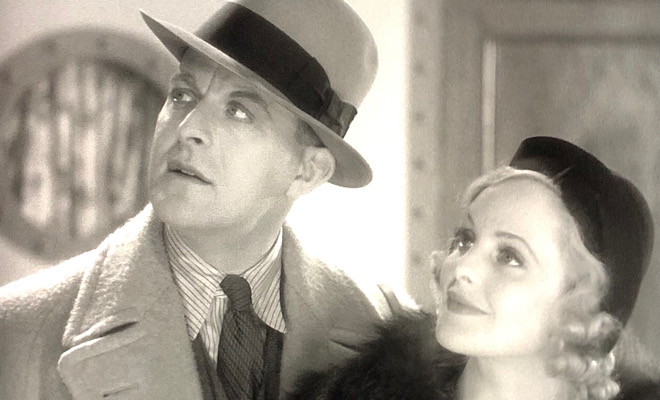 Dissatisfied Yuppie Fred Hill (Henry Kendall) hates his white-collar job and feels trapped in the modest apartment he shares with his pretty, contented wife Emily (Joan Barry). Envisioning a dreary existence defined by endless routines and little excitement, he whines about his desire for wealth, privilege, travel, and nice things. "I want life!" he crows. Almost on cue, Fred gets word from his rich uncle that he'll be receiving what would have been his inheritance right away, so he can enjoy himself while he's still young. Like someone who's just won the lottery, the overjoyed Fred instantly books a trip to Paris for himself and Emily, followed by a cruise to the Orient.

And so begins a journey to faraway lands and a voyage of self-discovery. Gobsmacked by the sites of Gay Paree and seduced by its decadent nightlife, the newly invigorated, often tipsy couple embrace their elevated status but seem ill-equipped to handle the pressures and temptations that go along with it. They soon embark for Asia, but the long trip exposes cracks in their marriage that soon become gaping chasms. While a bedridden Fred combats seasickness, Emily succumbs to the charms of the more mature and stable Commander Gordon (Percy Marmont), a man better suited to her quiet, down-to-earth personality. Fred's eyes also stray once he recovers, fixing their gaze on an exotic princess (Betty Amann) whose beauty, money, and royal aura bedazzle him. As Fred and Emily drift further apart, the film begs the question: Can their relationship weather the choppy waters or, like a leaky ship, will it eventually founder? 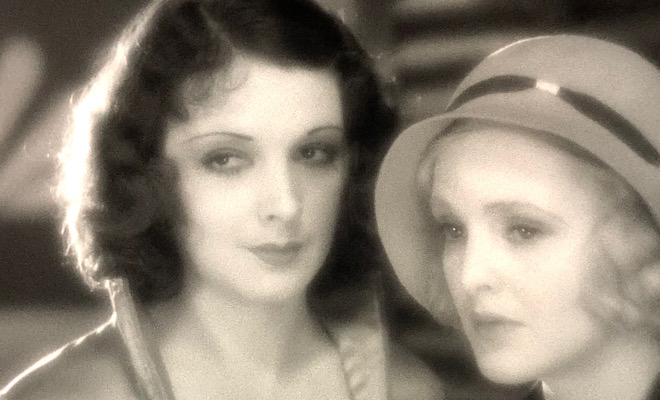 Money changes everything but solves nothing. That's the overarching theme of Rich and Strange, which also makes some astute points about marriage (how the bloom turns to boredom, the unavoidable sameness of everyday life, the allure of something new and exciting, and how easy it is to take for granted what we have) and the impetuosity and recklessness of youth. Unfortunately, the context framing those issues rarely rings true. An odd collection of characters also muddies the waters (Fred is especially insufferable) and makes the voyage as exhausting for the viewer as it is for Fred and Emily. On the plus side, Hitchcock, who relished ironic, wry endings, does provide a clever coda that brings the couple full circle.

Much like Number Seventeen, which was shot prior to Rich and Strange but released afterward, the film's fun mostly stems from watching a young Hitchcock try to find his cinematic footing. His always inventive technique consistently grabs attention, with such elements as staccato editing, an active camera, artistic shot compositions, subliminal visual cues, optical effects, and subjective, off-kilter perspectives to depict drunkenness and seasickness surprising and delighting us throughout. The Hitchcock Blonde is also on hand to project feminine allure and vulnerability, and the movie oozes a risqué, pre-Code attitude. (A shot of a bare-breasted Folies Bergère dancer elicits a gasp not only from Emily, but the viewer as well!)

Hitchcock also clings to silent film components like title cards that comment on the action and set the stage for upcoming scenes. Just as Number Seventeen's opening resembles a silent film, so too do the initial scenes of Rich and Strange as Fred endures an arduous commute home from work, battling rain, fussing with a broken umbrella, squeezing into a packed tube train, and dealing with cranky passengers. It's a virtuoso three-minute montage that brilliantly transmits myriad emotions as it depicts the relentless, exhausting hustle-and-bustle of urban society, all without a word of dialogue. Experience it for yourself below:

The episodic format Hitchcock employs here would come to fruition years later in such espionage classics as Foreign Correspondent and North by Northwest, but in Rich and Strange, the combination of action and humor is rather crude. The abrupt narrative transitions and changes in tone may hammer home the unpredictable nature of life, but they disrupt the film's rhythm and lend the proceedings a slapdash feel. (The climactic Titanic-like disaster that comes out of nowhere is one such example.)

Hitchcock often denigrated the performance of Joan Barry, who previously dubbed all of Anny Ondra's dialogue in Hitchcock's first talkie Blackmail, but I find her work natural and endearing. (Reportedly, a young Anna Lee also auditioned for the role, but the studio favored Barry.) Kendall nails his portrayal of Fred, emphasizing the character's spoiled, selfish, shallow nature, and newcomer Elsie Randolph, who 40 years later would play a pivotal part in Hitchcock's Frenzy, de-glams herself for a broad comic turn as the ship's resident busybody and spinster.

If you're a Hitchcock fan, you really should see Rich and Strange at least once, if just to take a gander at the developing style and brash attitude of a young, confident filmmaker sowing his cinematic oats. The magic that Marilyn Monroe created in front of the camera, Hitchcock fashioned behind it, and his work - even when it misses the mark - remains forever fascinating and deeply enriching. Like oil and water, Rich and Strange might not mix, but it's well worth giving a whirl. 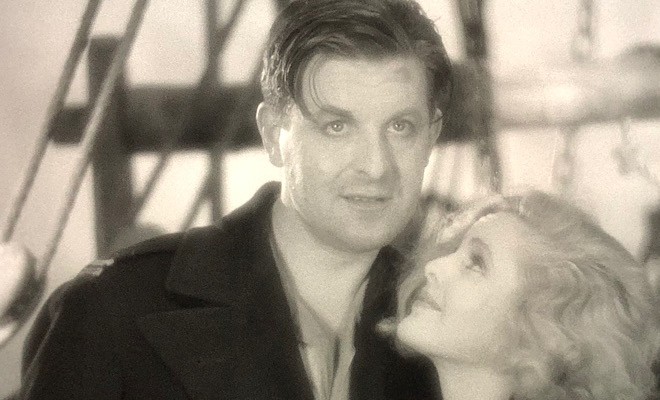 Vital Disc Stats: The Blu-ray
Rich and Strange arrives on Blu-ray packaged in a standard case. Video codec is 1080p/AVC MPEG-4 and audio is DTS-HD Master Audio 2.0 mono. Once the disc is inserted into the player, the static menu with music immediately pops up; no previews or promos precede it.

A 4K restoration by the British Film Institute yields a glorious 1080p/AVC MPEG-4 transfer that presents this rare Hitchcock film in the finest possible light. Exceptional clarity and contrast and beautifully resolved grain combine to create a stunning, silky smooth image that features rich blacks, bright yet stable whites, and nicely varied grays. A palpable film-like feel, strong detail levels, and a lovely sense of depth distinguish the transfer, which also seamlessly integrates the primitive special effects. Close-ups are crisp, but slightly diffused, transitions are a bit rough, and a few shots appear slightly overexposed, but those are minor quibbles. Without question, Rich and Strange has never looked better, and this impeccable rendering of a 90-year-old film will thrill both Hitchcock aficionados and anyone who appreciates the art of cinema.

The DTS-HD Master Audio 2.0 mono track supplies surprisingly clean, well-modulated sound. Though all the limitations and pitfalls of the primitive recording equipment can't be abated (some tinniness still remains), the track finesses the challenges well and creates a balanced, pleasing soundscape. Atmospherics like the hum of the ship's engine nicely shade the action, while sonic accents like footsteps, the snap of a cigarette case clasp, and rushing water flooding the deck are wonderfully distinct. Though at times the dialogue can sound a tad shrill, all the exchanges are clear and easy to comprehend, and no distortion, hiss, pops, or crackle muck up the mix.

A few supplements enhance the disc.

A breathtaking 4K restoration from the British Film Institute revitalizes the long-neglected Rich and Strange, an intriguing, deliciously odd early film from Alfred Hitchcock that chronicles a rocky marriage with wry humor and a healthy dose of cynicism. Hitchcock's arresting visual style sustains the uneven tale, which mixes comedy, romance, and a dash of suspense, and Kino's stellar Blu-ray presentation showcases the artistry that makes this curio worth watching. Though only diehard Hitchcock completists will want to add this title to their collection, anyone who appreciates inventive moviemaking should check out Rich and Strange. Worth a Look.