Any Hitchcock Blu-ray release inspires rejoicing, but all the euphoria in the world can't mask the deficiencies of Number Seventeen, which chronicles the messy aftermath of a jewel heist on a dark and stormy night. An exciting climactic chase perks up this early British thriller from the Master of Suspense, but a disjointed plot and lack of focus drag it down. A brand new 4K restoration revitalizes this 90-year-old curio that only the most fanatical Hitchcock devotees will want to add to their collection. For Fans Only.

There's classic Hitchcock, solid Hitchcock, and then there's mediocre Hitchcock...a handful of films that don't quite gel despite their visual vigor and inventiveness. Number Seventeen, one of Hitch's early British efforts, falls squarely into that dubious category, joining other ho-hum Hitchcocks like Topaz, The Paradine Case, and Jamaica Inn. Saddled with an almost incomprehensible story, populated by a cast of bland actors, and - most shocking of all - stylistically schizophrenic, this 1932 thriller misfires on almost all cylinders, yet despite its myriad faults, remains an interesting curio and quirky example of Hitchcock's burgeoning cinematic identity.

A director in search of a movie might be the best way to describe Number Seventeen, which was based on a popular 1925 British play, but doesn't retain much of its plot. The premise concerns a disparate group of mysterious individuals - a disheveled bum, deaf-mute society dame, a couple of dapper gentlemen, and a man who may or may not be a detective - who descend upon an abandoned multi-story townhouse one dark and stormy night. (One woman literally "descends" upon the home, falling through the ceiling from the floor above!) The street address of the structure is #17, and a few of the suspicious characters, who arrive in stages and sport glowering glares, carry a card with #17 emblazoned upon it.

The connection between them all - and a body lying at the top of the stairs - is at first unclear, but we soon learn a stolen necklace is stashed somewhere inside the house and everyone wants to get their paws on it. Those holding the #17 card might be involved in the heist and are using the abandoned building as a rendezvous spot because there's a secret underground railroad stop beneath the structure(!) that provides both the means for a quick getaway and direct access to boats that sail across the English Channel. 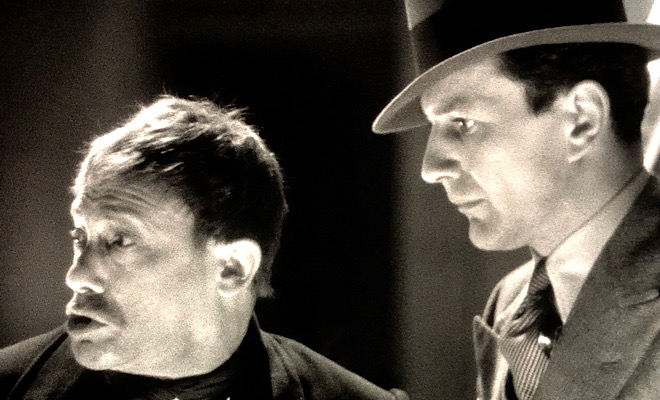 If all that sounds vaguely weird and terribly disjointed, join the club. I found Number Seventeen's sketchy, underdeveloped plot impossible to follow on my first viewing, but I attributed my lack of comprehension to the primitive equipment used to record the dialogue and unintelligible Cockney accent of actor Leon M. Lion, who plays the raving hobo who lurks around the house and anchors most of the film. Rather than throw up my hands and take the movie at face value, I decided to watch Number Seventeen a second time with the subtitles turned on so I could get a good grip on the story. And guess what? I still couldn't figure out what the hell was going on most of the time. Maybe Hitchcock couldn't either, which is why he decided to distract his audience with lots of spooky haunted house atmosphere, cheap thrills, and a lengthy climactic pursuit.

Made quickly to fulfill his contract with British International Pictures, Number Seventeen flaunts a slapdash, thrown-together feel that reflects Hitchcock's frustration with the studio and eagerness to move on to greener pastures. The Master of Suspense, who was known to meticulously plan every minute detail of his films in advance, seems to adopt a kitchen sink approach here, grabbing everything in his sizable bag of tricks and throwing it at the wall to see what sticks. The result is a string of eerie vignettes that Hitch struggles to stitch together. Choppy editing and several random jump cuts that seem to be employed solely for shock value rob the movie of elegance and exacerbate its flimsy feel.

Creepy shadows and ominous goings-on mix with stilted comedy during the film's bizarre first 40 minutes. (One bright spot is possibly the first high-angle staircase shot of Hitchcock's career, one that foreshadows the iconic view of Mrs. Bates emerging from her bedroom to attack Arbogast in Psycho almost 30 years later.) Thankfully, Hitchcock finally hits his stride, mounting a final chase scene aboard both a train and bus that rivets our attention despite the obvious use of miniatures that Hitchcock doesn't even try to disguise. The lengthy sequence bursts with urgency, excitement, pulse-pounding action, and - of course - suspense. 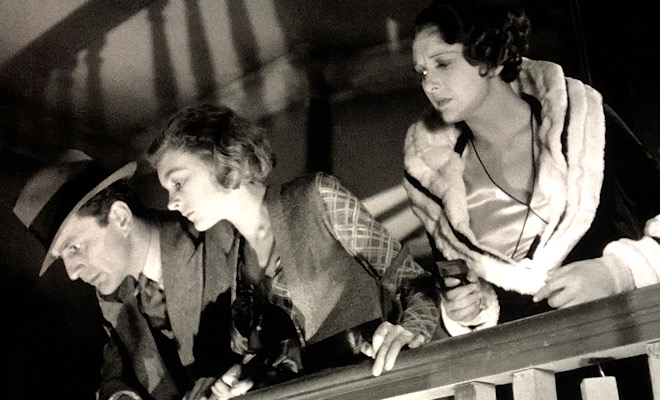 The unknown (at least by today's standards) British cast brings an authentic flavor and air of unpredictability to Number Seventeen, but the lack of any big names and recognizable faces, combined with rather bland performances, dulls emotional involvement and detaches us from the action. Lion was well-known to British audiences of the day and reprised the role he created on stage, but his broad portrayal, characterized by plenty of shameless mugging and scene-stealing, doesn't deliver its intended comic impact.

Hitchcock himself called Number Seventeen "terrible" and "a disaster," but despite its faults and less-than-ideal production circumstances, there's an endearing quality to this jumbled mess of a film that only surfaces on subsequent viewings. The train sequence alone makes the movie worth watching, but other artistic elements - however unrefined they may seem - provide a glimpse into the young Hitchcock's brain and a preview of some of the techniques he would refine and perfect over the next four decades.

Number Seventeen ranks far below #17 on the list of Hitchcock classics, but if you're a hardcore fan or student of one of the greatest directors of all time, you'll want to give this wild and crazy thriller a go. And if you can decipher its convoluted plot, by all means clue me in. 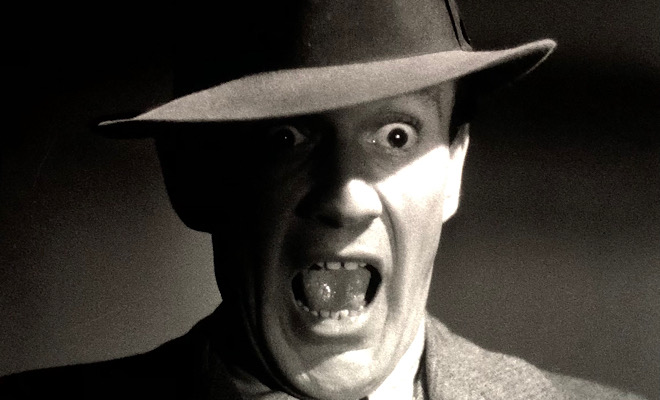 Vital Disc Stats: The Blu-ray
Number Seventeen arrives on Blu-ray packaged in a standard case. Video codec is 1080p/AVC MPEG-4 and audio is DTS-HD Master Audio 2.0 mono. Once the disc is inserted into the player, the static menu with music immediately pops up; no previews or promos precede it.

A new 4K restoration completed by the British Film Institute yields a top-notch 1080p/AVC MPEG-4 transfer that immerses us in the movie's creepy atmosphere. The plot of Number Seventeen may be incoherent, but it's fun to soak up the stimulating visuals, and this excellent rendering showcases Hitchcock's brash choices and burgeoning artistry. The evident yet well-resolved grain remains consistent throughout and preserves the look of celluloid, while surprisingly good clarity and contrast produce a vibrant, balanced image. All of Number Seventeen takes place at night, yet the picture never looks unduly murky, thanks to superior shadow delineation. Crisp, sleek lines make the shadows come alive and inky blacks supply essential weight. The white fur trim of Anne Grey's jacket exudes a wealth of texture, as do more ephemeral elements like mist and steam. Sharp close-ups allow us to fully appreciate Lion's expressive, rubbery face, as well as an eerie, lifeless hand sticking through a stair railing, and only a few errant nicks and marks dot the print. Number Seventeen is almost 90 years old, and though it doesn't look like a spring chicken, this new restoration has given this antiquated Hitchcock curio quite a facelift.

Sound is a huge component of almost every Hitchcock film, and while we have to accept the technical limitations of a movie made in 1932, there are inherent problems with the Number Seventeen audio. The DTS-HD Master Audio 2.0 mono track does what it can with what it has to work with and succeeds when it comes to effects. Elements like whistling wind, the clickety-clack rattling of a train, moaning sirens, rumbling engines, and piercing screams wield plenty of impact, and a wide dynamic scale handles them all without any distortion. The music by Adolph Hallis, who also scored Hitchcock's Rich and Strange the same year (and never composed for a movie again), sounds a bit thin, but still nicely complements the action and supplies essential atmospheric shadings. There's also very little surface noise for a film of this vintage, which is good news indeed.

The main issue with the track - and it's a big one - is the dialogue. Much of it is completely unintelligible. The fault lies not with Kino, but with the source material, which is hampered by primitive recording equipment, poor microphone placement, and the rapid-fire delivery and thick Cockney accent of actor Leon M. Lion. (Even the more refined performers can be difficult to understand at times.) Consequently, it's almost impossible to follow the plot. So if you want to fully enjoy Number Seventeen on your initial viewing, do yourself a favor and switch on the subtitles. As I write in my movie review above, they may not make the narrative any clearer, but at least you'll be able to decipher what the actors are saying.

A few supplements add context and perspective to this early, quirky Hitchcock film.

A Hitchcock misfire that nevertheless features a thrilling climactic chase sequence, Number Seventeen favors style over substance, but the lack of an engaging and coherent narrative stymies this bizarre curio. A brand new 4K restoration rejuvenates this 90-year-old classic and plenty of supplements sweeten Kino's Blu-ray presentation. Audio effects are robust, but despite remastering, the dialogue remains tough to understand, which can lead to a frustrating viewing experience. If you're a Hitchcock junkie, you'll want to add this rare title to your collection, but if you prefer the more mature and elegant films of the Master of Suspense, you might want to skip Number Seventeen. For Fans Only.