It took Warner Archive almost nine (long) years, but the studio has finally released the delectable follow-up to Grand Hotel on Blu-ray. With an all-star cast that includes Marie Dressler, John Barrymore, Wallace Beery, Jean Harlow, Lionel Barrymore, Lee Tracy, Billie Burke, and a host of others, Dinner at Eight is more appetizing - and way more fun - than its Oscar-winning predecessor. Director George Cukor's razor-sharp comedy-drama about a group of troubled socialites invited to a ritzy soirée still delivers the goods - and plenty of zingers - almost 90 years after its premiere, and Warner Archive honors it with a brand new restoration that makes it look and sound better than ever before. If you're hungry for a terrific Golden Age classic, Dinner at Eight will definitely satisfy your craving. Highly Recommended.

The all-star film was a new and exciting concept in the early 1930s, and after MGM wunderkind Irving Thalberg (who pioneered the format) hit pay dirt with Grand Hotel in 1932, he quickly began corralling personalities for a follow-up. It took a while to find a suitable property, but the studio finally settled on an adaptation of the George S. Kaufman-Edna Ferber Broadway hit Dinner at Eight, a seriocomic look-in on the lives of several disparate socialites invited to a posh dinner party. On its own, the play doesn't amount to much, but producer David O. Selznick cast it perfectly, and with Marie Dressler, John Barrymore, Wallace Beery, Jean Harlow, Lionel Barrymore, and Billie Burke chewing the scenery under George Cukor's fluid direction, Dinner at Eight becomes a polished, entertaining romp that effortlessly merges melodrama and social satire with high camp. And with apologies to Garbo, it's even grander than Grand Hotel.

A host of mini-dramas unfold — and ultimately intertwine — against the backdrop of an impending soirée thrown by shipping magnate Oliver Jordan (Lionel Barrymore) and his flighty, self-absorbed wife, Millicent (Burke). To Millicent, England's Lord and Lady Ferncliffe are without question the social season's most coveted catch, and after craftily securing the couple for dinner, she labors to build a splashy party around them. Millicent hopes only the cream of New York City society will attend, yet Oliver (who dismisses his nagging chest pain as "indigestion") throws a crimp in her plans by asking her to invite the visiting Carlotta Vance (Dressler), an eccentric grande dame actress for whom he romantically pined as a callow youth, and crass, nouveau riche businessman Dan Packard (Beery), who secretly schemes to take over Oliver's financially strapped company. Packard's guilty conscience tells him to decline Millicent’s dinner invitation, but his "common" wife Kitty (Harlow) won't hear of it, as she's dying to mingle with and be accepted by the penthouse set.

Also on the guest list are alcoholic actor Larry Renault (John Barrymore), whose career hit the skids with the advent of talkies and who just happens to be carrying on a clandestine affair with Oliver and Millicent's engaged daughter Paula (Madge Evans), and Dr. Wayne Talbot (Edmund Lowe), a serial adulterer who's beginning to tire of his latest diversion, the wanton Kitty Packard. Tangled webs, indeed. 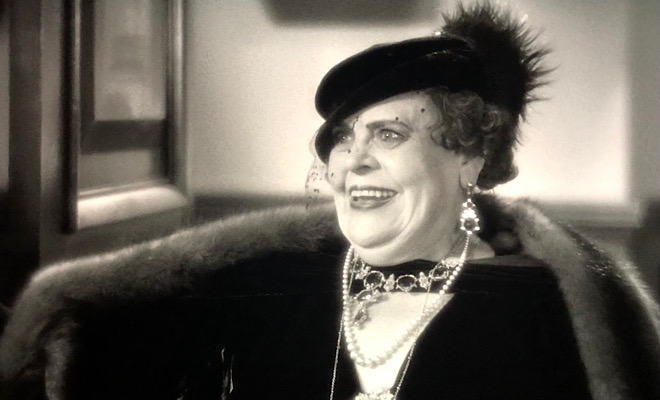 Although the plot shows its age, Dinner at Eight is all about the performances, and there's not a dud in the bunch. With her rubbery face, double chins, and plus-size figure, it's hard to imagine 67-year-old Marie Dressler as one of the era's top box office stars, but to watch her is to fall in love. Few actresses get more mileage out of a line or look, or play comedy and pathos with equal aplomb, but Dressler always strikes just the right balance, and as the larger-than-life, slightly daffy Carlotta she files one of her finest portrayals. Her priceless facial expressions steal every scene in which she appears, and though she grabs the lion’s share of laughs (including the flat-out guffaws that always follow her immortal final remark — one of the most famous and quoted in movie history), she also exhibits a touching tenderness that helps give Dinner at Eight its heart. (Sadly, the film marks her penultimate screen appearance, as Dressler would die of cancer the following year.)

Here's that classic moment between Dressler and Harlow:

Cukor once said John Barrymore had no vanity, and the legendary actor proves it with a brave performance that eerily foreshadows his own tragic destiny. As the egotistical actor who lets booze and arrogance unravel his life (a definite forerunner to Norman Maine in A Star Is Born), Barrymore paints a sad portrait of a man on the skids clinging to the last vestiges of fame. His brother Lionel — minus the mannerisms that would later consume him — also impresses as the ailing Oliver, while Burke is an absolute delight as the dizzy, hopelessly stressed Millicent. Whether obsessing over her guest list, fretting about a ruined aspic, or having a conniption after a string of calamities, Burke so completely nails her screwball character she rarely was cast as anything else for the rest of her career. 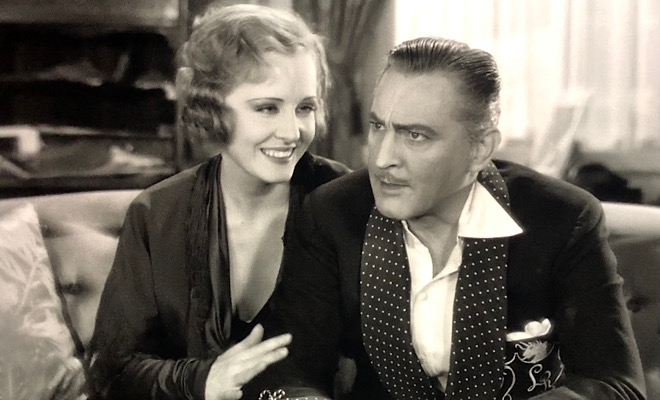 Rumor has it Harlow and Beery detested each other, but their mutual disregard only enhances their portrayal of battling marrieds. Their dialogue crackles with insults and put-downs (Beery: Remember what I told you last week? Harlow: I don't remember what you told me a minute ago.), and in a no-holds-barred brawl, the two punctuate their rebukes with such poetic endearments as "you big gasbag!" (hers) and "you poisonous little rattlesnake!" (his). Few movie arguments can top theirs, and the pair's down-and-dirty sniping adds a welcome crudeness to the film's upper-crust tone. A particularly memorable Harlow tirade unfolds thusly: "Who do you think you're talking to, that first wife of yours out in Montana? That poor, mealy-faced thing with a flat chest that didn't have nerve enough to talk up to you? Washing out your greasy overalls and cooking and slaving in some lousy mining shack! No wonder she died!"

As the social-climbing tart who treats her sullen maid like dirt, Harlow brings plenty of comic attitude to her portrayal and more than holds her own with established pros like Beery and Dressler. And sewn into a skintight white satin dress (that perfectly matches her platinum hair) she's a sultry vision at the climactic dinner party. (Reportedly, the gown was so form-fitting, Harlow couldn't sit down between takes for fear of busting the seams and had to recline against a specially constructed cushioned board in order to relax!) Beery is also at his blustery best and seems to relish manhandling Harlow and calling her a "little piece of scum." 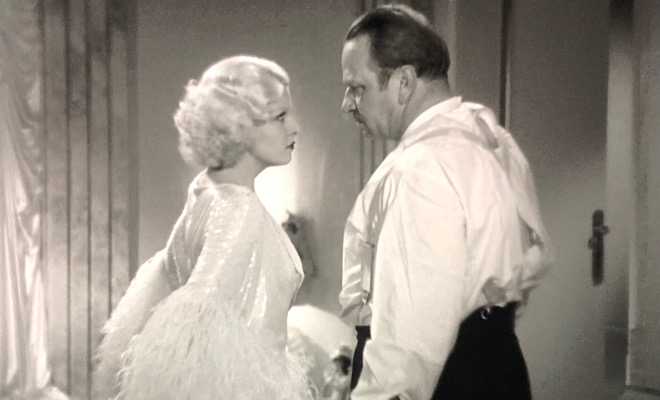 Cinematically, Dinner at Eight possesses minimal style, often employing a static camera to record the action, as if it were transpiring on stage. Yet what initially might seem like directorial apathy becomes an inspired choice by Cukor, who was smart enough to realize nothing should detract from his stars' potent magnetism. His understated technique marvelously exploits their aura and allows us to savor every arched eyebrow, polite grimace, and broad double-take.

Few directors could handle such a plethora of egos, but Cukor thrived in the rarefied atmosphere and completed the film in an astonishing 24 days. Like a master chef, he manipulates all the ingredients, adjusts the seasoning, and turns Dinner at Eight into a deliciously satisfying, signature dish. Bon appétit! 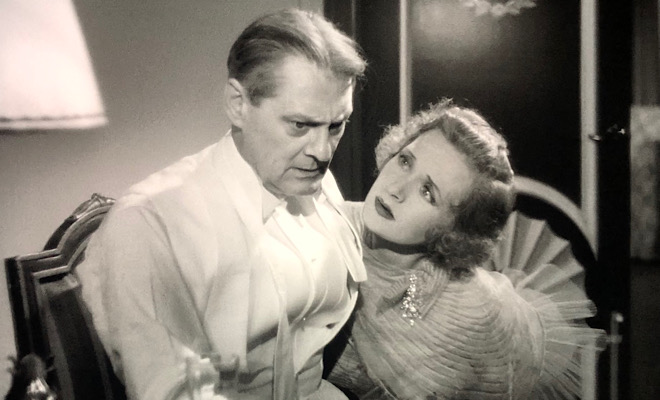 Vital Disc Stats: The Blu-ray
Dinner at Eight arrives at long last on Blu-ray packaged in a standard case. Video codec is 1080p/AVC MPEG-4 and audio is DTS-HD Master Audio 2.0 mono. Once the disc is inserted into the player, the static menu without music immediately pops up; no previews or promos precede it.

A new HD master culled from a 4K scan of the best preservation elements distinguishes Warner Archive's lovely 1080p/AVC MPEG-4 transfer that's a nice step up from the 2005 DVD. All of the speckling, occasional white blotches, and faint scratches that plagued the DVD have been meticulously erased, leaving a clean, vibrant, beautifully balanced image that sports excellent clarity and contrast. Improved grayscale, deeper blacks, and better defined whites punch up the picture, with Harlow's platinum hair, white satin gown, white feathery bed jacket, and the white sheets and pillows that surround her while she lounges in bed all exuding a wonderful crispness. Costume and fabric textures, jewelry details, and the décor of the opulent interiors are sharp, and though grain has been reduced, there's still enough of it to maintain the feel of celluloid. All the close-ups brim with fine detail, highlighting Harlow's alabaster complexion, Dressler's rubbery jowls, sunken eyes, and double chins, John Barrymore's classic profile, Beery's olive skin, and Lionel Barrymore's ashen pallor.

Early 1930s films require immense amounts of TLC - and plenty of $$$ - to make them high-def worthy, which might explain why it's taken so long for Dinner at Eight to arrive on Blu-ray, but Warner Archive's marvelous presentation makes the wait well worth it. If you're a fan of this priceless all-star classic, you need to grab this impeccable upgrade.

The DTS-HD Master Audio 2.0 mono track erases all of the faint surface noise and errant pops and crackle that afflicted the previous DVD and sounds richer in tone than many early 1930s movies. Dinner at Eight is a dialogue-driven film, and thankfully every quip, zinger, and pointed remark is easy to comprehend. Music is sparingly employed, but a wide dynamic scale handles its highs and lows without any distortion. There are no exterior scenes in the film, so effects are minimal, and the characters' largely dignified decorum keeps things quiet indoors, too (except during Harlow and Beery's screaming matches). Silences are mostly clean, and the chimes that signify the hour as dinner approaches are distinct. Sometimes a subdued track is harder to put over than a noisy one, and this stellar effort keeps us focused on and engrossed in the story.

Thankfully, all the supplements from the 2005 DVD have been ported over to this Blu-ray release.

As sumptuous as a four-course feast, Dinner at Eight is a delectable comedy-drama featuring a gallery of icons hamming it up to the hilt. Stargazing has never been so much fun, as Dressler, Beery, Harlow, the Barrymores, and the rest of the MGM gang put the gold in Hollywood's Golden Age. Nothing can tarnish this antique gem, and Warner Archive's terrific restoration slathers on additional gilt. They certainly don't make 'em like this anymore, but Dinner at Eight makes us wish they did. Highly Recommended.