In the Good Old Summertime

Don't be fooled. Despite its temperate title, In the Good Old Summertime is a Golden Age Christmas classic that supplies plenty of warm holiday fuzzies. This musical remake of The Shop Around the Corner switches the locale to turn-of-the-20th-century Chicago, but keeps the story of two anonymous - and amorous - pen pals who unknowingly work together (and hate each other!) largely intact. Judy Garland and Van Johnson make a delightful pair, and the comedy, songs, romance, and seasonal cheer make this charming film a Yuletide favorite. Highly Recommended.

When you think of Judy Garland Christmas films, the 1944 classic Meet Me in St. Louis instantly springs to mind, but unless you're a diehard Garland fan, you might not know MGM's legendary star appeared in another yuletide musical a few years later. I mean, who would ever dream a movie called In the Good Old Summertime takes place mostly at Christmas? The title may be misleading, but this charming romantic comedy set in turn-of-the-20th-century Chicago exudes at least as much seasonal cheer as its St. Louis cousin, and stands on its own as a captivating piece of escapist entertainment that can be enjoyed any time of year.

A musical retooling of the marvelous Ernst Lubitsch film The Shop Around the Corner, In the Good Old Summertime lacks the original's European sophistication, but makes the tale of rival retail clerks who unknowingly carry on an anonymous - and increasingly amorous - correspondence more accessible. Veteran screenwriters Albert Hackett and Frances Goodrich, fresh from scripting such holiday classics as It's a Wonderful Life and Easter Parade, switch the locale from a Budapest gift shop to a Windy City music store, excise the melodrama (there's no suicide attempt in this version), and lace their script (which they co-wrote with Ivan Tors) with more broad comedy. The result is an endearing confection peppered with several nostalgic songs and lots of old-world flavor. Though Robert Z. Leonard's uninspired direction can't muster anything close to the patented "Lubitsch touch," the stellar cast supplies the fuel to keep the film's engine humming.

The plot chronicles the daily sniping of competing store clerks Veronica Fisher (Garland) and Andrew Larkin (Van Johnson), who work at an upscale music shop owned by the mercurial, often cantankerous Otto Oberkugen (S.Z. Sakall). Both make regular trips to their respective post office boxes in the hope a poetic letter from their unknown, equally lonely-hearted "friend" will be waiting for them. The substantive correspondence sustains Veronica and Andrew, but little do they know their soul mate on paper is someone they loathe in person. Of course, their petty, in-store bickering masks a repressed mutual attraction, but the question remains: Will this combustible couple ever meet, and if they do, will the shock of learning each other's identity ruin their burgeoning relationship? 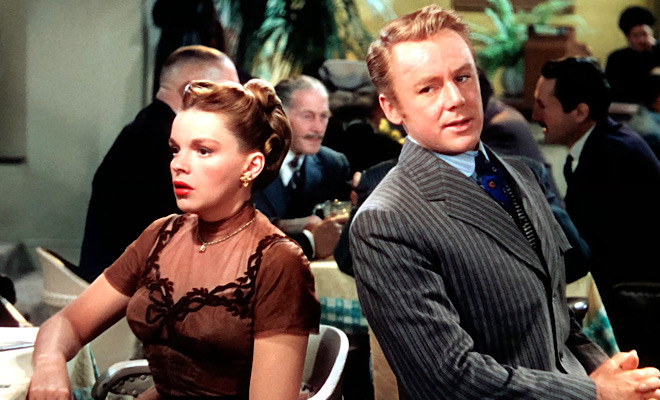 Sakall is wonderful, too, and certainly lives up to his nickname "Cuddles." He and Spring Byington, as Otto's level-headed, long-time lady friend who can't abide his horrific violin playing, share a warm rapport, but also generate a few fireworks. On the flip side, accomplished violinist Marcia Van Dyke, who plays a classical music student vying for both a scholarship and Andrew's affection, excels in her instrumental scenes but can't act her way out of a paper bag. Her bland, often monotonic performance strikes the only sour note in an otherwise harmonious film. 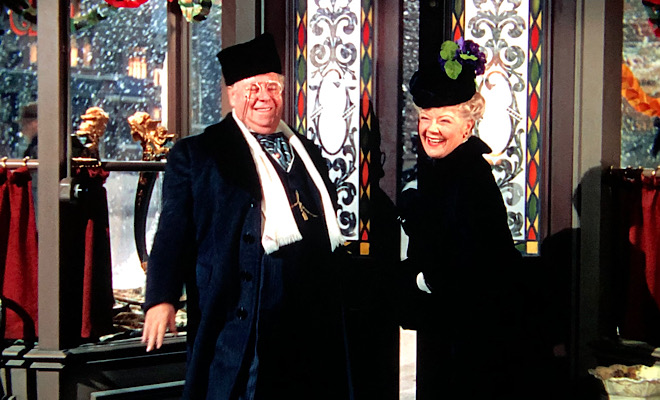 Garland's work, however, is music to the ears...in more ways than one. As always, she delivers the vocal goods with spirited renditions of such period tunes as "Meet Me Tonight in Dreamland," "Put Your Arms Around Me, Honey," "Play That Barbershop Chord" (performed with a mustachioed barbershop quartet), and especially the free-wheeling "I Don't Care," but In the Good Old Summertime also gives Garland ample opportunity to show off her innate flair for comedy. Her uproarious first scene, in which an oblivious Andrew literally bumps into Veronica on the post office steps and totally dishevels her (see clip below), is a definite highlight, but Garland's pitch-perfect timing and arch sense of humor - two elements of her screen persona that often get overshadowed by her singing - are on full display throughout the film.

It's common knowledge Garland introduced what would become one of the most famous holiday songs of all time, "Have Yourself a Merry Little Christmas," in Meet Me in St. Louis, but easy to forget In the Good Old Summertime includes a very lovely Christmas song, too. Written expressly for this film, "Merry Christmas" sadly never achieved the same degree of renown, but features a lilting melody with simple, hopeful lyrics that Garland interprets with her inimitable heartfelt sincerity. It's become a favorite of mine, and if you watch the clip below, it might find its way onto your holiday playlist as well.

No discussion of In the Good Old Summertime would be complete without recognizing the often unheralded work of Van Johnson. Few challenging roles came his way during his lengthy career, but his natural, easygoing presence enlivened countless films, and his portrayal of Andrew ranks as one of his best. The sparks that fly between Johnson and Garland make us wish they had made more pictures together, but Garland's departure from MGM the following year prohibited any subsequent pairings. Johnson does, however, hold the distinction of being the first man to appear on film with Garland's daughter, Liza Minnelli, who at age two-and-a-half shows up in the film's last few seconds looking very nonplussed as Veronica and Andrew's little girl. As Minnelli proudly points out in That's Entertainment!, In the Good Old Summertime marked her film "debut."

It's rare when a remake almost equals the original, but In the Good Old Summertime does just that. Though The Shop Around the Corner's superior place in film history is secure, this musical revamp is a worthy alternative filled with seasonal spirit galore, wonderful comedic and romantic shadings and lots of Judy Garland joy. That adds up to quite a festive film that's sure to brighten your holidays. 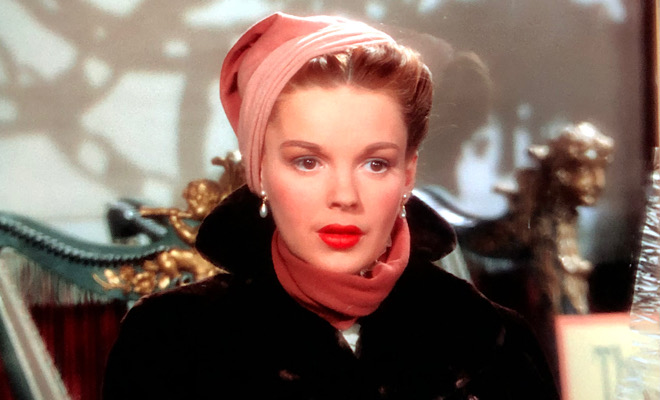 Vital Disc Stats: The Blu-ray
In the Good Old Summertime arrives on Blu-ray packaged in a standard case. Video codec is 1080p/AVC MPEG-4 and audio is DTS-HD Master Audio 2.0 mono. Once the disc is inserted into the player, the static menu with music immediately pops up; no previews or promos precede it.

Once again, Warner Archive delivers a delectable transfer of a Technicolor musical, thanks to a new remaster sourced from original elements. Superior clarity, pitch-perfect contrast, and bold, beautiful hues distinguish the 1080p/AVC MPEG-4 rendering of In the Good Old Summertime, which also features rich blacks, bright and stable whites, and just enough grain to maintain the warm, nostalgic film-like feel. Fine details are easy to discern (the colored harp strings are especially fetching), as are the fabric textures of costumes, upholstery, and accessories, and intricate patterns resist shimmering. Flesh tones appear natural and remain stable throughout, and breathtaking close-ups flatter the lovely Garland and ruddy, freckle-faced Johnson. 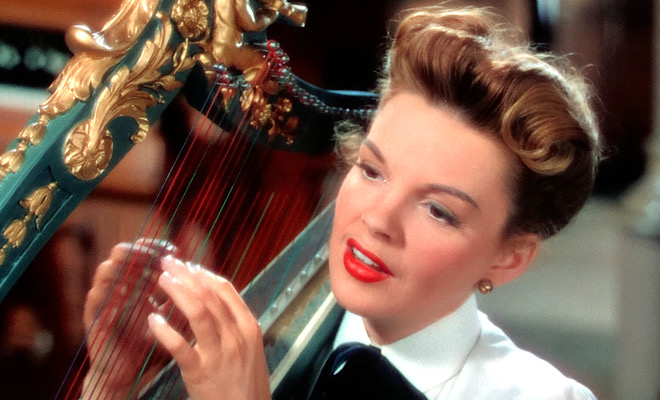 The Technicolor, of course, is the transfer's star, with lush reds consistently stealing the spotlight. Garland's bold red lipstick grabs attention and her red velvet dress in the "Play That Barbershop Chord" and "I Don't Care" sequence screams Christmas. (It also recalls a similar turn-of-the-century gown Garland wore at the holiday dance in Meet Me in St. Louis five years before). The green holiday decorations in Mr. Oberkugen's store and a host of more muted shades in various costumes combine to create an eye-catching array of hues that exude vibrancy without looking artificial. Some color issues plagued the 2004 DVD, but this new remaster resolves them all and looks much cleaner, too. Just a few errant marks dot the print and never distract from the on-screen action.

Musicals fans in general and Garland aficionados, in particular, will rejoice over this glorious effort that's a big step up from the DVD and well-deserving of an upgrade.

The DTS-HD Master Audio 2.0 mono track does the best it can with what it has to work with. The available source is far from optimal and suffers from level fluctuation early in the film, evidenced by a noticeable drop in volume coupled with some inherent muffling during dialogue scenes. I raised the volume quite a bit to compensate for the defect, but when the musical numbers kicked in, the fidelity dramatically increased, forcing me to fumble for the remote once again so I could reduce the volume. This pattern continued for a while, but thankfully the levels stabilize as the movie wears on, with the songs exhibiting just a slight - and pleasant - boost in volume and fidelity. A bit of faint surface noise also can be detected during the film's initial offending sequences.

Once everything gets straightened out, the merits of the track shine through. A wide dynamic scale handles all the highs and lows of the lush orchestrations, including the harp-forward "Meet Me Tonight in Dreamland" and a dazzling classical violin solo by Marcia Van Dyke later in the film, without any distortion. Garland's iconic vocals, whether robust, tender, or melancholy, sound rich and full and all the dialogue - despite the level issues early on - is easy to comprehend. Though Warner technicians can't totally hide the track's age, they've done a fine job sprucing up the audio of this intimate musical.

All the extras from the 2004 DVD (with the exception of trailers for The Shop Around the Corner and You've Got Mail) have been ported over to this Blu-ray release. Sadly, the disc not include Garland's deleted number, "Last Night When We Were Young," which was discovered many years ago in the MGM vaults. That rare gem would have been a wonderful bonus, but no such luck.

In the Good Old Summertime may not eclipse The Shop Around the Corner, but it's far better than You've Got Mail and remains a delightful musical that seamlessly blends comedy and romance while delivering plenty of old-fashioned holiday cheer. Judy Garland and Van Johnson sparkle in this time-honored tale that's been given a marvelous visual makeover by Warner Archive. A few audio issues inherent on the source soundtrack slightly dampen enthusiasm for this disc, but the tantalizing Technicolor and Garland's magic help us forgive any faults. In the Good Old Summertime, despite its misleading title, is a grand old holiday film and it comes Highly Recommended.