The Shop Around the Corner

Christmas movies come in all shapes, sizes, and styles, and one of the most enduring and beloved examples of a film that doesn't quite fit the traditional Yuletide mold remains The Shop Around the Corner. Director Ernst Lubitsch's 1940 romantic comedy may not have a holiday title, but its themes perfectly reflect the spirit of the season. With warmth, humor, and plenty of atmosphere, this delightful tale of unlikely love, incredible coincidence, and the deep need for human connection worms its way into our hearts while reminding us ever so subtly what Christmas is all about.

Alfred Kralik (James Stewart) is the top salesman at Matuschek and Company, a classy gift shop in Budapest run by the benevolent but mercurial Hugo Matuschek (Frank Morgan), who treats Kralik like the son he never had. Reserved, professional, and focused on his career, Kralik hasn't had time to pursue love, but reveals to a co-worker he recently answered a newspaper ad from a young woman seeking an anonymous, cerebral correspondence. The two have exchanged a few letters and forged a deep bond that Kralik hopes could lead to marriage.

One day, an attractive woman named Klara Novak (Margaret Sullavan) comes to the shop desperately seeking a job. Kralik rebuffs her, but she wins Mr. Matuschek's favor and joins the staff. A crackerjack saleslady, Klara doggedly competes with Kralik, and the resulting friction spawns an intense mutual disregard. Sparks fly between them, but when Kralik discovers Klara - of all people - is his secret penpal, the shocking revelation wreaks further havoc on their combative relationship. 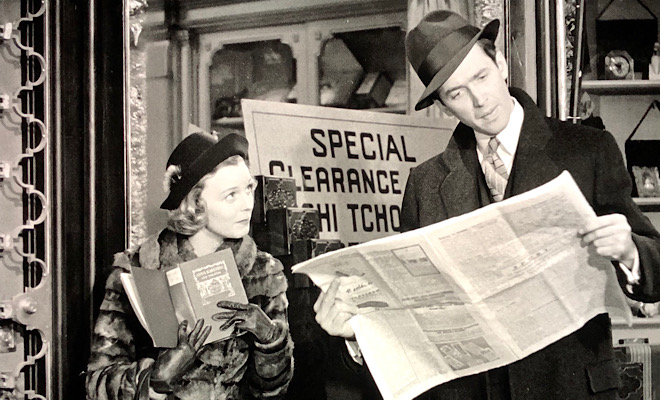 If you think the plot sounds suspiciously similar to that of the 1998 Tom Hanks-Meg Ryan romcom You've Got Mail, you're right, but please don't hold writer-director Nora Ephron's anemic and trite semi-remake against the far superior original. The first version of any film almost always stands as the best version, and that's certainly true here. So if you've already seen - and properly dismissed - You've Got Mail, you really need to give The Shop Around the Corner a spin to see how beguiling this oft-told tale truly can be.

Lubitsch, one of Hollywood's greatest directors, was known for his deft hand, lightness of tone, elegance and sophistication, and enviable ability to titillate audiences with risqué material without violating the Production Code. All those qualities combined to create what was known as "The Lubitsch Touch," and The Shop Around the Corner, which the director later called "the best picture I ever made in my life," has that touch in spades.

As a romantic comedy, the film possesses all of the genre's classic components...and even might have invented a few of them. The competition and disdain that hides an underlying sexual attraction, the manipulative mental games used to test the waters and gauge depth of feeling, and the realization that the mind and soul are where love blooms...all those well-worn themes are here, but Lubitsch and screenwriter Samson Raphaelson build on them, and that's what makes the film so special and unique. 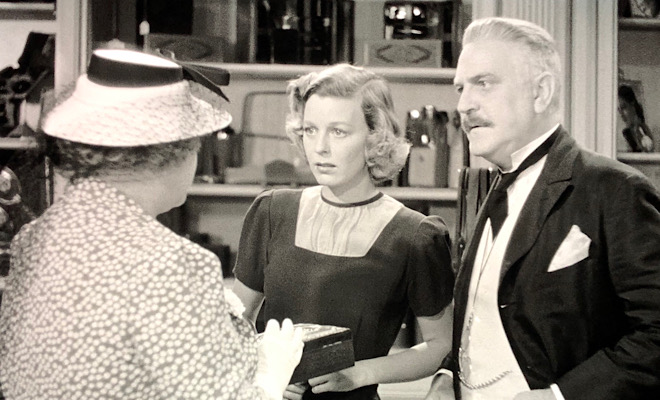 The Shop Around the Corner transcends the typical frothy romcom because Lubitsch and Raphaelson construct a broader canvas and paint Mr. Matuschek and his employees as a close-knit, often dysfunctional family. Sure, Kralik and Klara get the lion's share of attention, but all the petty jealousies, rivalries, power plays, tiffs, compromises, reconciliations, emotional support, and personal crises that are a part of any workplace are seamlessly woven into the story's fabric. Every character has a story arc and a distinct personality that's well developed, and some of the sweetest, most intense, and most impactful scenes don't even involve Kralik and Klara. Creating that sense of community on film isn't easy, but Lubitsch makes it look effortless.

And so does the cast. Stewart made more movies with Sullavan than any other actress, and of their four films together, The Shop Around the Corner stands as their best. (The Mortal Storm, also recently released on Blu-ray by Warner Archive, ranks a close second.) Both stars are so natural, relatable, endearing, and create such comfortable and crackling chemistry, we can't help but fall in love with them, and because the two are so adept at both comedy and drama, they're fully able to handle the twists, turns, and nuances of the textured script.

Stewart and Sullavan carry the movie, but they're also part of a tight ensemble that adds immense flavor and spicy accents to this delectable brew. Morgan may be best known for his multiple roles in The Wizard of Oz, but he filed two of his finest performances a year later in The Shop Around the Corner and The Mortal Storm. (Stewart and Sullavan must have been his good luck charms.) As the patriarchal, often insufferable Matuschek, he's bombastic, cantankerous, emotionally tortured, sensitive, and protective of his loyal employees. Morgan handles the difficult role with great dexterity, and his final scene will simultaneously fill your heart and break it. 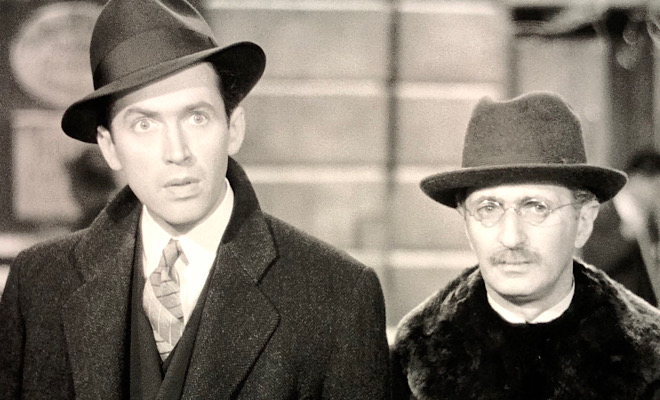 Felix Bressart, who plays Kralik's sympathetic and steadfast best friend, appeared in no less than seven films in 1940, and though he may be best remembered as one of the wayward Russian comrades in Ninotchka, he makes an equally strong impression here. With his bushy moustache, thick German accent, sensitive demeanor, and pitch-perfect comic timing, the instantly recognizable Bressart steals almost every scene in which he appears and creates a wonderful rapport with Stewart. In other key parts, Joseph Schildkraut is at his oily best as a conceited clerk who ruffles everyone's feathers, and William Tracy and Charles Smith shine in minor but still essential roles.

The critical and popular success of The Shop Around the Corner  made it an ideal candidate for a remake. Nine years after its premiere, MGM revamped the story (setting it in a turn-of-the-century Chicago music store), added some period songs, and cast Judy Garland and Van Johnson as the bickering leads. The resulting film, In the Good Old Summertime (an ironic title considering most of the action still transpires at Christmastime), scored well at the box office and may have inspired She Loves Me!, a musical stage adaptation that premiered on Broadway 14 years later. (It was revived in the mid-1990s and as recently as 2016.), Thirty-five years after that, Ephron updated the tale to the computer age in an unsuccessful attempt to recapture the magic Hanks and Ryan created in Sleepless in Seattle. Though Hanks often has been compared to Stewart, You've Got Mail proved he can't eclipse him.

And none of those versions eclipse Lubitsch's original. Until you've seen The Shop Around the Corner, you really haven't seen this funny, heart-tugging tale...and to enjoy it to the fullest, you must watch it during the holiday season when its plot and themes resonate most strongly. Once you do, this captivating Golden Age classic just might earn a permanent slot in your Christmas movie rotation. 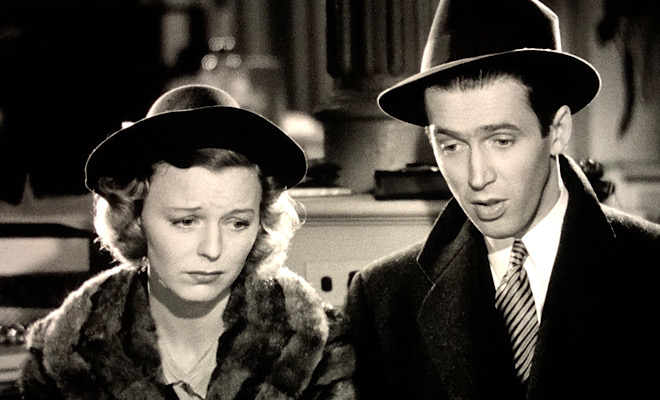 The Shop Around the Corner arrives on Blu-ray packaged in a standard case. Video codec is 1080p/AVC MPEG-4 and audio is DTS-HD Master Audio 2.0 mono. Once the disc is inserted into the player, the static without music immediately pops up; no previews or promos precede it.

A new HD remaster spruces up The Shop Around the Corner, and the resulting 1080p/AVC MPEG-4 transfer faithfully honors the beautiful cinematography of the esteemed William Daniels and is a nice step up from the 2002 DVD. Excellent clarity, contrast, and grayscale produce a contoured picture that features plenty of depth and detail, while a lovely grain structure helps retain the feel of celluloid. Deep black levels anchor the image and the omnipresent white snow remains well defined and resists blooming throughout. The falling flakes look frosty and crisp, costume patterns are stable, background elements are easy to discern, and solid shadow delineation keeps crush at bay.

All the nicks, marks, scratches, blotches, and faint vertical lines that plagued the previous DVD have been meticulously erased, and no digital anomalies intrude. At times, the picture looks a tad too bright, but that's the only hiccup in an otherwise superior presentation. Without a doubt, The Shop Around the Corner has never looked better on home video, and this new remaster will certainly please the film's legion of fans.

The unobtrusive, well-modulated DTS-HD Master Audio 2.0 mono track nicely complements the on-screen action. A wide dynamic scale embraces the highs and lows of Werner R. Heymann's lilting score, allowing it to easily fill the room, and the all-important dialogue is well prioritized and easy to comprehend. Sonic accents and atmospherics come at a premium, but are crisp and distinct, and though some faint surface noise can be detected during a few quiet moments, any age-related pops, crackle, and underlying hiss have been erased. Distortion is absent as well. Audio isn't this film's strong suit, but thanks to some remastering, the 80-year-old Shop Around the Corner sounds surprisingly spry.

A few interesting extras round out the disc. All the supplements from the 2002 DVD, with the exception of the production notes, have been ported over to this Blu-ray release, and Warner has added a couple of vintage radio adaptations to the mix.

Though its title doesn't allude to Christmas, The Shop Around the Corner stands as one of Hollywood's most beloved holiday classics. The story of a couple of battling store clerks who - unbeknownst to either of them - are also secret amorous penpals has been filmed a few times, but never more beautifully than by director Ernst Lubitsch. Margaret Sullavan and James Stewart delightfully banter and bicker in this warm and festive romantic comedy that looks better than ever, thanks to a new HD remaster. Solid audio and a few vintage supplements also distinguish Warner Archive's Blu-ray release that arrives just in time for Christmas. Highly Recommended.