One of the best gangster movies ever made, the original 1932 version of Scarface remains a blistering account of the rise and fall of a Chicago crime boss who bears a striking resemblance to Al Capone. The great Paul Muni shoots up the screen as the ruthless title character and director Howard Hawks crafts a raw, brutal, titillating motion picture that's just as riveting today as it surely was 89 years ago. Australia's Imprint Films recycles the same (very good) transfer from the 2019 Universal Blu-ray, but adds several new supplements and attractive slipcase packaging (for the first 1,500 copies sold) to create a special limited edition release that's worth importing from Down Under. Highly Recommended.

Ninety years after their respective releases, Little Caesar, The Public Enemy, and Scarface remain the holy trinity of Hollywood gangster films. The three violent pre-Code thrillers blazed their way to box office success in the early 1930s and provided an enduring template for a genre that continues to captivate viewers today. Though the first two movies may be better known and have certainly attracted wider audiences over the past nine decades (eccentric producer Howard Hughes pulled Scarface from circulation in the early 1940s and locked it away in a vault, where it remained until after his death in 1976), Scarface looms above them, packing more action, artistry, titillation, and grit into its 93 minutes than Little Caesar and The Public Enemy combined. Not only is Scarface the quintessential gangster picture, it also stands as arguably the greatest gangster flick of all time.

Not so loosely based on the rise of Chicago mobster Al Capone (the names were changed to protect the innocent people making the movie from the story's guilty - and dangerous - subjects), Scarface tells a simple, straightforward tale of greed, power, ego, and violence with enormous style and vigor. As the film opens, small-time hood and hitman Tony Camonte (Paul Muni), who wears an X-shaped scar on his left cheek like a badge of honor, elevates his status in Johnny Lovo's South Side bootlegging gang by bumping off a rival mob boss. Lovo (Osgood Perkins) warns the ambitious, cocky Tony to respect the Windy City's North Side syndicate, run by dapper don Tom Gaffney (Boris Karloff), but Tony believes he can conquer the territory, and wages a violent turf war that consumes Chicago and terrorizes its residents.

As the body count rises, so does Tony's reputation and renown. Not only does he begin usurping Lovo's position within the gang, he also catches the eye of his boss's sassy society girlfriend Poppy (Karen Morley). While their romance heats up, Tony's 18-year-old, wild-child sister Cesca (Ann Dvorak) sets her sights on Guino Rinaldo (George Raft), Tony's loyal sidekick. Their liaison enrages Tony, who harbors a deep-seeded incestuous desire for Cesca that sparks apoplectic fits whenever another man touches her. His jealousy, along with Lovo's desperate mob maneuvers, spark a string of events that threaten to topple Tony from his precarious perch on top of the crime world. 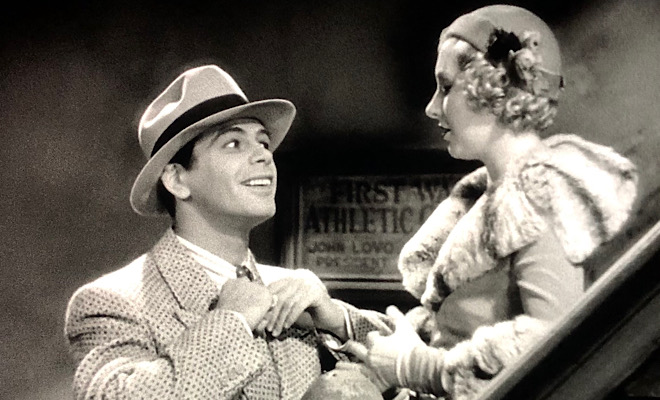 Scarface is a visceral thrill ride from start to finish. With customary panache, director Howard Hawks pulls out all the stops, crafting exciting shootouts, impressive car chases (a novelty at the time), tense confrontations, and sexy exchanges. His bold brush strokes excite the senses, but Ben Hecht's crackling script laces the stimuli with subtle nuances, provocative subtext, and a liberal sprinkling of arch comedy that (slightly) tempers the prevailing nastiness. (Such accomplished scribes as W.R. Burnett, John Lee Mahin, and Seton I. Miller also contributed to the screenplay.) Hughes vowed to make Scarface bigger, brasher, and more violent than any gangster film before it, and despite Herculean censorship struggles, he and Hawks succeeded.

Though the rigid Production Code that would sanitize motion pictures for decades to come had yet to be enacted, the censors still gave Hollywood headaches, and at a time when real-life racketeers like Capone dazzled Depression-weary Americans, concerns over the graphic depiction of violence and glamorization of the opulent, amoral, and corrupt gangster lifestyle prompted the Hays Office to clamp down on Scarface prior to its release. A written prologue denouncing the gangster culture and beseeching the public's help in quashing it was added, along with preachy speeches by a crusty newspaper editor and outraged district attorney, who makes an impassioned plea to "pass a federal law that puts a gun in the same class as drugs and white slavery." (Unbelievably, almost 90 years later, we're still waiting for such a law to be passed.) An alternate ending also was shot and incorporated into prints that would be screened in regions that banned the original cut. (For more on the alternate ending, check out the supplements review below.)

Controversy may have dogged Scarface before and after its release, but there's nothing controversial about the high-voltage performances that juice up this electrifying film. Scarface put Muni on the Hollywood map, and though his broad portrayal occasionally crosses the line into caricature, it perfectly suits such a flamboyant larger-than-life figure. Of course, it's tough not to compare Muni's Tony Camonte to Al Pacino's Tony Montana in Brian De Palma's 1983 quasi-remake, but while both esteemed actors voraciously chew the scenery, Muni better gets under his Tony's skin and disappears inside him. (Always insecure about his looks, Muni often hid behind thick makeup in his movies, usually to great effect.) His scenes with the equally magnetic Dvorak - whether creepy, violent, or tender - are raw and affecting, especially the one in which he rips open Cesca's bodice and shoves her against a window after he espies her dancing too closely with a random man in a nightclub. The lead-up to that explosive confrontation, which includes Cesca's highly suggestive attempt to lure Rinaldo onto the dance floor, can be seen in the clip below:

Dvorak's wild, fiery eyes light up every scene in which she appears, but she's at her best in the thrilling finale when Cesca emerges from the shadows brandishing both an ice-cold stare and loaded handgun. It's one of the film's most striking images and stands as a chilling contrast to the steamy sexuality Dvorak exudes during most of the movie. Sadly, Scarface didn't catapult her to stardom the way it did Muni and Raft, though she certainly deserved it. Dvorak signed a long-term contract with Warner Bros after the film's premiere and was subsequently wasted in a barrage of B films that eventually killed her career.

Raft doesn't do much other than flip coins, a bit of business Hawks devised to make the inexperienced actor feel more comfortable in front of the camera (Billy Wilder would memorably spoof it 27 years later in Some Like It Hot), and though it's fun to see Karloff out of monster makeup, he's a tad too dignified (and way too British) to play a Chicago gangster. Surprisingly, the film's best supporting performance comes from arguably its least known performer, Osgood Perkins, who's perhaps best remembered as the father of Norman Bates...I mean, Anthony Perkins. The elder Perkins was an accomplished stage actor who only made a scant 20 films before his untimely death from a heart attack in 1937 at age 45, but he brings wonderful dimension and authenticity to the slimy Lovo. 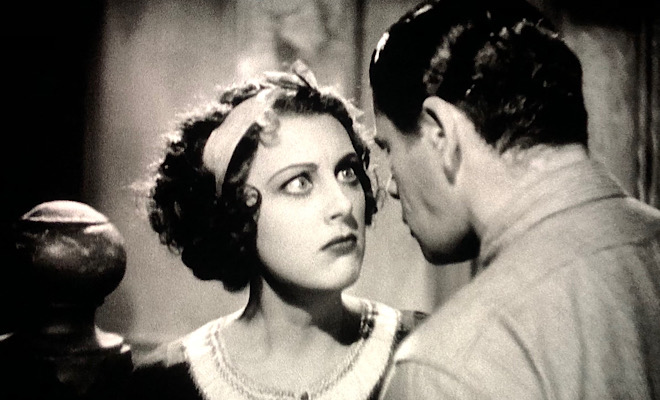 Say what you will about Howard Hughes, but at the tender age of 26 he produced the quintessential gangster movie. That's quite an achievement, and it grows ever more impressive as the years tick by. Gangster films come and go, but Scarface sticks around because it captures the essence of an era as it was transpiring. The ripped-from-the-headlines story somehow still feels fresh, and the messages about crime, morality, and most importantly gun violence (who cares if the censors mandated them!) remain relevant and relatable almost a century later.

Strip all that away and you still have a ferociously entertaining and impeccably filmed crime drama that brims with excitement, sex, violence, humor, and vivid, hot-blooded characters. De Palma pays homage to this all-time classic, but his lavish, bloated, over-the-top remake can't beat Hawks' lean, mean, gritty original. Little Caesar and The Public Enemy drew up the gangster blueprint, but Scarface broke the mold...or rather shattered it in a flurry of bullets. 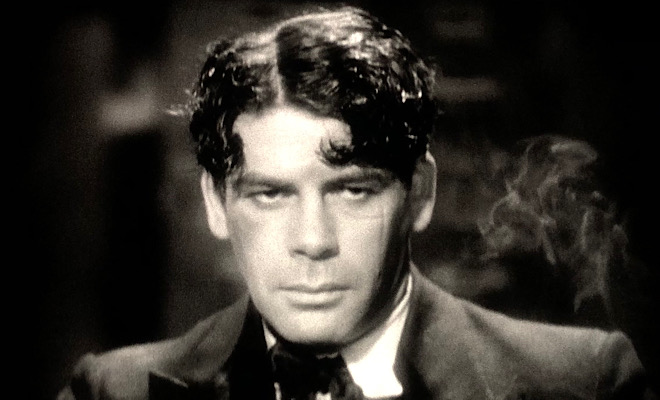 Vital Disc Stats: The Blu-ray
The 1932 version of Scarface arrives at last on Blu-ray packaged in a standard clear case inside a sturdy, glossy slipcase. (Only the first 1,500 copies of this Blu-ray release will include the slipcase.) Video codec is 1080p/AVC MPEG-4, audio is LPCM 2.0 mono, and the disc is region-free. Once it's inserted into the player, the static menu with music immediately pops up; no previews or promos precede it.

The 1080p/AVC MPEG-4 transfer from Universal Pictures is the same one used for Universal's 2019 Blu-ray release, and though it never rivals the impeccable recent work from Warner Archive, it stands as an impressive rendering of this rare film. Heavy grain is a trademark of early 1930s movies and usually spells trouble in a digital transfer, but it never compromises clarity here and actually enhances the tale's gritty, rough-and-tumble tone. Though it lends the image a lovely film-like feel, it also contributes to a slight overall softness that keeps the picture from projecting the desired wow factor.

Very good contrast heightens depth, and wonderful shadow delineation pumps up the impact of some of Hawks' most striking shots. The rich blacks sometime fall victim to crush, but the bright whites never bloom, and the grays in between sport a nice array of finely graded shades. Close-ups are sharp enough to highlight Tony's omnipresent scar, Lovo's bushy mustache, and the alluring glamor of both Morley and Dvorak, and only a few errant specks dot the largely pristine source material. Lest we forget, Scarface is 89 years old, and though this transfer isn't perfect - and the film itself is long overdue for a full-scale restoration - it's an excellent specimen that brings this blazing tale of hitmen, tommy guns, and seamy organized crime to brilliant life.

Recording equipment was still fairly primitive back in 1932, but this LPCM 2.0 mono track presents Scarface's rat-a-tat-tat audio in the best possible light. Machine gun fire, shattering glass, fisticuffs, and revving car engines are all crisp and distinct, and most of the dialogue is comprehendible. (Muni's accent and occasional mumbling muffle a few phrases, but it's easy to get the gist of what he says.) Though music is sparingly employed - it's used only over the beginning and end credits and in nightclub scenes - a wide dynamic scale embraces its highs and lows and helps it fill the room with ease. Some faint surface noise remains audible during quieter stretches, but any pops and crackle have been erased and no distortion mucks up the mix. Considering talking pictures had just debuted a few years earlier, this track has held up amazingly well and adds a lot to this thrilling, visceral motion picture.

In addition to the extras included on Universal's 2019 Blu-ray release, Imprint packs on a few supplements exclusive to this limited edition.

You can have Brian De Palma and Al Pacino. I'll take the Howard Hawks and Paul Muni version of Scarface any day of the week. Tight, nasty, sexy, and violent, this explosive pre-Code gangster film memorably chronicles the rise and inevitable fall of a ruthless Chicago crime boss modeled after Al Capone. This region-free Australian import from Imprint Films boasts a strong transfer, solid audio, and a few more supplements than the 2019 Universal release. The 1932 version of Scarface stands as not only one of the greatest gangster movies of all time but also one of the rarest, and this limited edition Blu-ray from Imprint Films showcases it with style. Highly Recommended and well worth importing.