Genre stalwarts Barbara Crampton and Larry Fessenden headline Jakob’s Wife a fun throwback horror picture with solid performances and a witty premise. It’s not the best beast on the block but it’s an entertaining show. RLJE Films delivers a solid Blu-ray release with an excellent A/V presentation and a smattering of bonus features. If you’re a fan of the leads you’ll want to check this one out. Worth A Look

Barbara Crampton plays Anne the repressed wife of Jakob (Larry Fessenden) - a small town patriarchal pastor who doesn’t really know how to do anything for himself. As Jakob views himself the leader of souls, he easily forgets the soul of his wife standing right next to him as she routinely does all of the work with little reward - religious or otherwise. But when Anne is turned into a vampire, their relationship dynamic takes a brutal bloody turn. 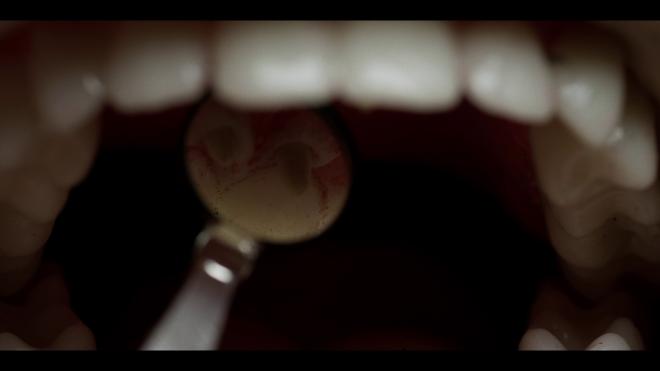 I’ve said in other reviews that horror isn’t the easy genre to work in as is often assumed. Equally tough is comedy. Twice as hard is making a pitch-black horror-comedy as you must straddle the balance between two emotional extremes. While a good scare can make you laugh, your timing has to be perfect. I read a lot of high praise going into Jakob’s Wife so that may have set the bar just out of reach for this film to deliver. It was a fun flick to be sure, but not quite on the level that felt promised.

Produced by Crampton and directed by Travis Stevens with a trio of credited screenwriters, it feels like Jakob’s Wife struggles with it its identity. If it was a straight horror film with themes about relationship dynamics and religion, it could have been something. If it had leaned more into the comedic premise and gone fully absurd with its concept it could have been hilarious but probably not very scary. In this 98-minute finished form, you can feel the movie struggling with the goals of being scary and funny. Parts are funny. Parts are scary. Then there were parts that missed the mark deflating some of my enthusiasm for this film. Thankfully enough of the film works to be an enjoyable little romp but probably not the modern classic fans were hoping for.

Whether or not the horror or comedy elements work, performances are what make this movie. Barbara Crampton has been around the horror block a few times in her career and she’s a delight here. She communicates so much of her frustration with her pre-vampire life with simple glances that when she truly comes alive as a member of the undead it’s a lot of fun. Just as great is low-budget horror icon Larry Fessenden as Jakob. He’s kind of a well-meaning schlub who takes his easy life for granted, but then when he has to get off his ass and take care of himself it’s pretty damn funny how he plays that. Bonnie Aarons gets a fun turn as “The Master” - a Nosferatu-styled creature of the night who plays well under some great makeup effects.

While the balance of horror and comedy might be a bit timid, I’ll give credit to director Travis Stevens for crafting a visually interesting film. The lighting transitions for Anne’s descent into vampirism is a great cue as her bright white pastoral visage gives way to dark bloody shadows. He makes use of a limited budget and locations to make this small town feel large.

As I said, most of this movie works - and the parts that do work really well. It’s just those pieces that stumble hit the ground pretty hard leaving Jakob’s Wife a bit wobbly. I don’t think it lives up to those high-praise reviews I read before I saw it, but it’s certainly not as bad as the negative reviews I read after I saw it that trashed it either. It’s a middling final effort. Watch it for the great performances and visual design. There’s something lurking in this project that’s very appealing and worth checking out.

Vital Disc Stats: The Blu-ray
Jakob’s Wife arrives on Blu-ray from RLJE Films and Shudder in a single-disc set. Pressed on a Region A BD-25 disc, the disc is housed in a standard snapper keepcase with an identical slipcover. The disc loads to trailers for other Shudder releases before arriving at an animated main menu with traditional navigation options. 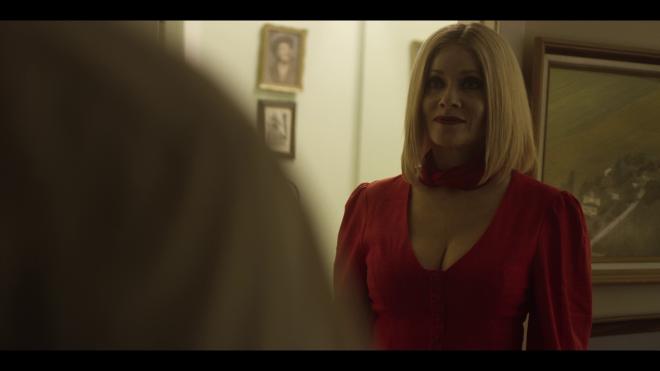 As I mentioned in the main review, Jakob’s Wife offers up some solid visuals and I’m glad to see this disc handles the load well. There are a lot of extremes from bright white light to deep dark inky blacks and this 1.85:1 1080p transfer never falters. Throughout, the film's details are robust allowing textures in clothing, production design, and some pretty gnarly makeup to come through. At first colors are a bit muted by design with a lot of whites, tans, and non-descript peachy colors. When Anne shows up in bright blood red workout gear it’s a great pop of color. Similarly, blues and yellows shine as necessary rather than being part of a “naturalistic” visual style. The only issue of note is some slight banding with some patterned textures and lines but it’s very slight. There's also some softness to the image but that appears to be a purposeful stylized choice rather than an issue with the transfer. Otherwise, this is an overall excellent looking disc. 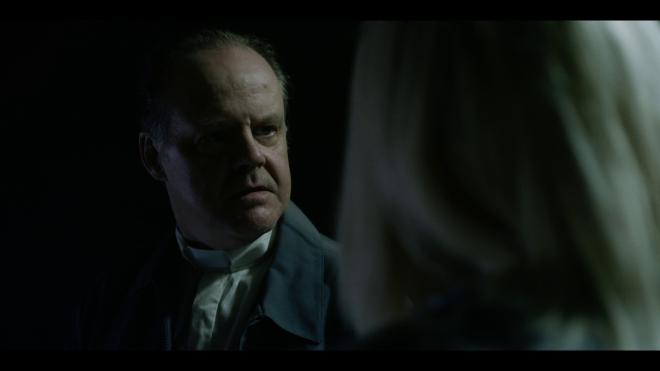 Just as impressive as the visuals is the sound design for Jakob’s Wife. With this DTS-HD MA 5.1 track, a lot of effort goes into establishing a calm boring “normal” before Anne and Jakob’s lives are thrown into upheaval. When Anne is about to be attacked and turned, the lead-up is a great scene in a dark creepy factory. It’s kind of a cliche location but it works so well with the sound design that the smallest little bumps or foot scrapes get a spot in the soundscape directing some fun surround effects. The final showdown is also a nice highlight for this mix. Throughout there’s plenty of atmosphere to the track letting small sounds populate the surrounds keeping the channels active and engaged. Dialog is clean and clear throughout without issue. All around a great active mix for this little film. 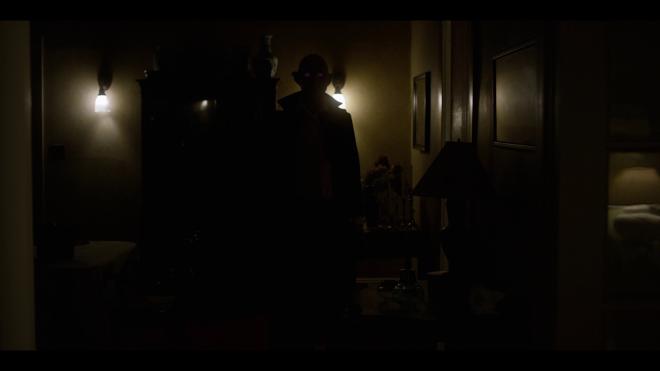 Bonus features aren’t the most robust ever assembled. The Making Of is your basic EPK talking head materials without much in the way of depth. The Deleted Scenes are interesting, some of which I thought could have been left in to help balance some of the tonal inconsistencies. Some scenes definitely needed to remain on the cutting room floor - but that’s true for every movie. 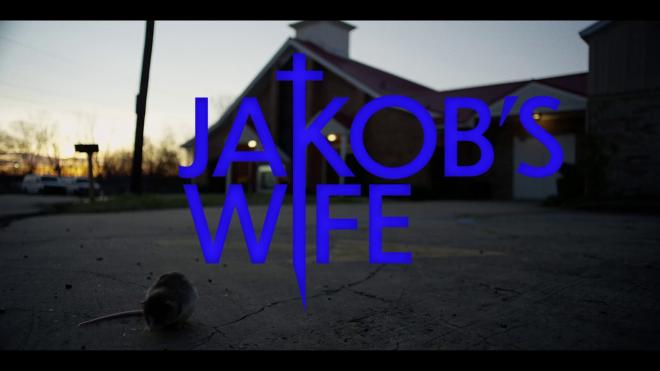 In the world of Horror/Comedy Jakob’s Wife is a good effort. It doesn’t hit the dark comedy mark the same way The Re-Animator did nor does it hit the absurdist hilarity of Return of the Living Dead. It’s got funny moments but despite some of the marketing buzz to the contrary, I have a hard time calling this a full-on Horror/Comedy. Straight horror, sure - it works and offers some good scares with some great makeup effects. It’s not a complete success but overall I dug it. If nothing else you get Barbara Crampton and Larry Fessenden playing husband and wife which in of itself is kinda funny.

RLJE Films and Shudder delivers a solid Blu-ray release for Jakob’s Wife with an excellent A/V presentation and a small smattering of bonus features. Not the greatest film ever made, nor the worst, it’s a fun way to burn an hour and a half of your time and is certainly Worth A Look