Two of cinema's most revered and iconic monsters have finally fought their way back to the big screen in a modern, epic big-blockbuster action film called Godzilla vs. Kong, carrying the story from the three previous films set in that universe (Kong: Skull Island, Godzilla, and King Of The Monsters). The two behemoths are the stars of this spectacle, rarely missing any screen time in this visually stunning home-run of a movie that is sure to please everyone of all ages with its remarkable action sequences. Godzilla vs. Kong is highly entertaining and some of the most fun anyone can have watching a film. It's an absolute blast. Highly Recommended

Watch Godzilla vs. Kong on HBO MAX or in a Theater Near You. 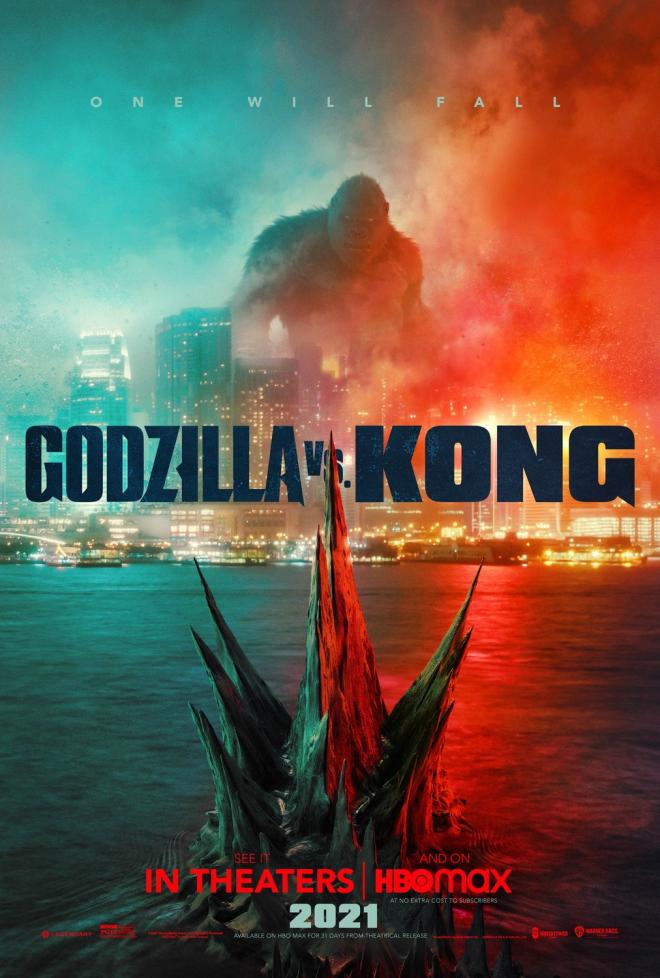 Indie-horror filmmaker Adam Wingard (You're Next, The Guest) takes the reigns of the director's chair and knows precisely how to frame these epic fights as nobody has ever done before - even besting Peter Jackson. The story takes place a few years after Godzilla saved humankind once again from Ghidorah, where Godzilla and King Kong are now the last two Titans on Earth. Godzilla is swimming around the ocean, while Kong resides in a giant, simulated dome on Skull Island for his protection against Godzilla. Luckily Kong can communicate with a young deaf girl named Jia via sign language to keep him calm.

Meanwhile, the Apex Cybernetics Corporation is supposed to be protecting the world from other big monsters, which is led by Walter Simmons (Demian Bichir), however, he greedily has ulterior sinister motives that will put more money and power in his pocket with a top-secret project he's working on that requires some strange artifacts and otherworldly power from monsters. Godzilla is alerted to this seismic power and begins to destroy cities in search of taking out what he thinks is a villain, which is where Kong comes in to try and stop things from getting worse by traveling to the center of the Earth. Like a boxing match, there are several rounds of impressive fight scenes between Godzilla and Kong before a bigger threat might have the two pulling a Batman v Superman moment (their mothers aren't named "Martha") that guarantees a ton of audible cheers.

Godzilla vs. Kong is by far the best-looking and most energetic and fast-paced film set in this universe. It's almost two hours long and it feels like a brisk 80 minutes with little to no time to settle down and breathe. That's a good thing because the script from Eric Pearson (mostly an uncredited writer for Marvel films) does nobody any favors with its truly bland and lifeless dialogue that only seems to exist as a segue to the next big action sequence. In fact, the film could have been dialogue-free and nobody would have missed a beat or anything important. This is not necessarily a bad thing, because it still focuses everything on Kong and Godzilla, and rightfully so, because Wingard uses his camera to give each Titan some much-needed and wonderful character beats and facial expressions that have been missing before. Seeing Kong and Godzilla figure things out as they're happening on screen and showcasing real emotions is pretty fantastic, whether it be Kong doing his morning routine of showering and waking up or Godzilla crossing paths with a giant Ape and calculating its next move to strike and kill to become the Alpha.

There's even a side plot with a former Apex employee turned conspiracy theorist podcaster who teams up with Madison (Millie Bobby Brown) and her friend Josh (Julian Dennison from Hunt For The Wilderpeople), as they try and stop Apex and help Godzilla. They have a fair amount of screen time and mostly provide some of the cringe-worthy comic relief, but their entire existence could've been cut out and nothing would have changed the film. Most every character and human plot point are similar to this rote and lazy element, but again, every scene flies by fast with giant explosions and fights, because that's exactly what this film is, a series of amazing matches between two giant monsters from start to finish, and it's glorious.

The way Wingard uses Hong Kong at night is marvelous, pitting these two Titans against a backdrop of stylized neon-colored buildings that simply light up the dark sky with purples, greens, blues, and reds that mix perfectly with all the fiery explosions that erupt on a consistent basis. It's a visual masterpiece as well when Wingard uses some clever camera angles to convey the size and these Titans and the destruction they cause, including a shot from inside a fighter jet, taking off at full speed, and seeing Kong in the background wreaking havoc. There are a ton of original shots like this throughout the film and it gives the image and these characters some great perspective and depth to see them in different light and angles. Godzilla vs Kong is the ultimate showdown and one of the best action-films where two dialogue-free characters carry the entire film on their shoulders.

Watch Godzilla vs. Kong on HBO MAX or in a Theater Near You.