When a scientific expedition to an uncharted island awakens titanic forces of nature, a mission of discovery becomes an explosive war between monster and man. Tom Hiddleston, Samuel L. Jackson, Brie Larson, John Goodman and John C. Reilly star in a thrilling and original new adventure that reveals the untold story of how Kong became King.

Kong: Skull Island opens in 1944 with a pair of fighter pilots parachuting onto an unnamed island and their battle to the death is interrupted by a giant gorilla, giving audiences a teaser of things to come. Unfortunately, there was nothing particularly exciting or memorable of the entire sequence aside from a brief glimpse of the classic monster, followed by the remainder of a standard but somewhat slow first act introducing pertinent details and characters. However, the moment that finally sold me was a squadron of military helicopters thirty years later flying onto the same mysterious island while blasting Black Sabbath's "Paranoid" through loudspeakers. Immediately, the scene plays like a quirky, if not also a bit goofy, allusion to Francis Ford Coppola's Apocalypse Now with a deliberately knowing and lighthearted tone. We are meant to make the connection, even as soldiers drop seismic charges and Samuel L. Jackson chews up the scenery as the surly, embittered Lt. Colonel Preston Packard. For the next ninety minutes, don't take anything too serious and simply enjoy a throwback to the classic adventure tale.

Making that particular song all the more humorous choice is that it foreshadows the obsessive, manic behavior of two notable characters: Jackson's Packard and John Goodman's Bill Randa. While Packard leads the soldiers escorting a group of explorers through the uncharted island, Randa is supposed to be in charge of the expedition. But as we slowly discover, neither man is ultimately in control of diddly squat in a strange, mystical land where animals grow to the size of buildings and nightmarish monsters roam freely. Interesting, however, is how these two seemingly contrasting men's response to the island appears similar yet very different. Both men feel the need to be vindicated of some perceived loss of purpose and worth. Feeling as though the Vietnam War was not lost but abandoned, Packard's Captain Ahab-like fixation is on avenging fallen soldiers against an uncivilized but misunderstood monster. Under the guise of surveying the island before the Russians do, Randa is haunted by a terrifying experience from his youth no one believes, and Kong is the evidence that'll prove his version of those events. 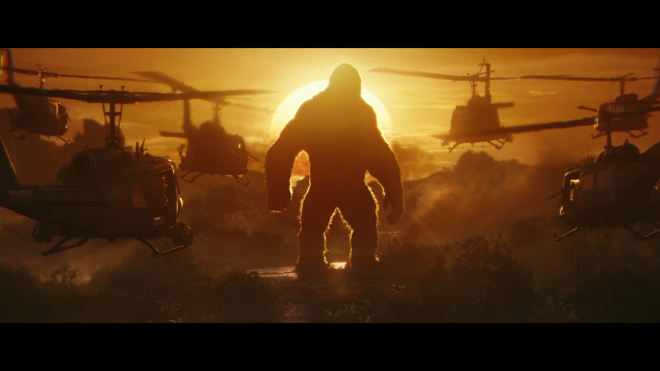 Caught in the middle of these men's obsession are volunteers with different goals for the island in mind and a company of hardened soldiers who'd much rather go home now that the war is finally ended. Guiding everyone through the island is skilled tracker and former British officer Captain James Conrad (Tom Hiddleston doing excellent at removing traces of his Loki performance) while famed photojournalist Mason Weaver (Brie Larson) attempts to document the discovery but better succeeds at butting heads with everyone else, especially the soldiers. The filmmakers smartly only teased at a possible budding romance between these two and instead, keep our attention on the race to leave the island. Although the small group of soldiers and scientists are given some amusing screen time, they are on this voyage ultimately as red shirts, fodder for the carnage, and occasionally allude to other adventure actioners like James Cameron's Aliens and John McTiernan's Predator. In fact, Jackson shares a great moment towards the end of the second act where he stands opposite Kong that practically screams a similar showdown between Schwarzenegger and the extraterrestrial trophy hunter Yautja.

By proudly wearing his love of other films, particularly classic creature-features, director Jordan Vogt-Roberts and his crew make Kong: Skull Island a fun, straightforward monster movie that feels reminiscent of classic matinee adventure flicks. And with John C. Reilly bringing a great deal of humor as the aforementioned WWII fighter pilot who's sadly lost a few marbles in the three decades he's lived on the island, the big-budgeted production also comes with an offbeat B-movie quality that's energetic and well-paced. A couple, questionable moments feel as though dragging its knuckles through the mud, but the overall plot is concise with a specific objective in mind, a larger end goal that should excite monster-movie fans everywhere. This Kong, who's tripled in size from his original 1933 design, exists in the same universe as 2014's Godzilla. Only, Vogt-Roberts film is more of a prequel to Gareth Edwards's remake, putting into motion an eventually meeting where the two classic monsters will duke it out with other familiar creatures of the Toho kingdom. Fans should wait for a post-credits surprise mentioning which of those monsters we could see next.

Warner Home Video and Legendary Pictures bring Kong: Skull Island to Blu-ray as a two-disc combo pack with an UltraViolet Digital Copy. The Region Free, BD50 disc sits opposite a DVD-9 copy inside a blue, eco-cutout case with a glossy slipcover. After a couple skippable promos, the screen changes to a static screen with a generic set of menu options along the bottom of the screen.

The king makes his home theater debut with a gorgeous, squeaky-clean 1080p/AVC MPEG-4 encode that showers the screen with an extravagant array of colors, providing the whole 70s style photography a hip and groovy energy.

From the green in the smoke hovering over the ape graveyard to the bright blue sky peeking through the clouds, the picture is continuously awash with sumptuous primaries and lush, vibrant secondary hues. The locals inhabiting the island come dressed in red, blue and yellow garments and body paint that pop while sunset scenes burst with a mix of yellow, orange, red and magenta that smoothly blend into each other. The entire palette simply comes through vividly, in spite of a stylized cinematography that leans towards a yellowish earth tones. Contrast is noticeably but intentionally restrained. However, the freshly-minted transfer still displays crisp, bright white throughout, allowing for superb visibility into the distance. Brightness levels are somewhat effected, but enough to be an issue. In fact, blacks remain accurate and true with excellent delineation within the darkest portions of the frame.

Presented in a 2.40:1 aspect ratio, the video also displays razor-sharp details in any given scene. The veins of leaves are plainly visible, tiny pebbles on the ground are distinct, and viewers can clearly make out the cracks and fractures lining the dark, rough bark of every tree. Individual hairs on Kong's body are striking and definite, moving independently of each other, while each scar and injury remains unmistakable beneath the fur. Every thread and stitch in the clothing and knapsacks are sharply defined, and facial complexions are highly revealing, exposing every tiny pore, wrinkle and blemish in the entire cast. Overall, this latest take on a classic monster doesn't monkey around on Blu-ray.

Kong roars into battle with an often exhilarating Dolby Atmos soundtrack that leaps into action right from the opening moments. This track is also featured on the 4K Blu-ray. Interestingly, Warner has decided to also include a DTS-HD Master Audio 7.1 version of the design for those not yet equipped for the object-based audio format.

Immediately throwing viewers into the thick of the action, the throaty grumbling engines of two fighter planes feel as though flying above the listening area. They first start moving from the rear heights to the front heights and come crashing down on the beach at the screen. Later, when a helicopter squadron tears through the otherwise calm skies of the island, the chopper's rotors are clearly heard above, and many of the flying creatures living there also traveling from one channel to the next with flawless panning. Kong's familiar roar echoes throughout the entire room, spreading into the sides and rears while also filling the space overhead. Quieter scenes are arguably a bit lacking, creating some noticeable pockets of silence, but occasionally, a few creatures suddenly make a noise that sprawls across the ceiling speakers.

Nevertheless, the soundstage and front heights are continuously kept active with a variety of background noise and Henry Jackman's score, displaying a highly-engaging soundfield and exhibiting superb, crystal-clear clarity in the mid-range. A thunderous, monstrous low-end delivers plentiful oomph to the explosions, gunfire and monster mayhem, providing the design with a terrific sense of presence. There are a few room-rattling, booming effects that dig into the ultra-low depths, occasionally hitting deep as low as 8Hz and 12Hz (bass chart). Even at its loudest and most tumultuous, the object-based mix maintains the priority of the vocals.

Audio Commentary: Director Jordan Vogt-Roberts rides solo through this decently informative if also pretty dry journey that touches on various aspects of the production while also sharing some amusing anecdotes.

Creating a King (HD): Pair of featurettes collecting cast & crew interviews looking at designing Kong, the various film iterations since its introduction in 1933 and how this modern version differs from the rest.

On Location: Vietnam (HD, 6 min): Discussion on filming in the country with interviews and BTS footage.

Through the Lens (HD, 2 min): On Brie Larson's character and her real photographs seen in the film.

Functioning like a prequel to 2014's Godzilla, Jordan Vogt-Roberts's Kong: Skull Island is a fun, straightforward monster movie that feels reminiscent of classic matinee adventure flicks. With a great deal of humor, excitement and excellent performances by an large ensemble cast, the big-budgeted production also comes with an offbeat B-movie quality that's energetic and well-paced, adding to the anticipation of seeing the two classic monsters eventually going toe-to-toe. The Blu-ray arrives with a gorgeous, squeaky-clean video and a highly satisfying Dolby Atmos soundtrack that'll make fans very happy. Although supplements are a bit on the light side, the overall package is very much recommended for monster collectors.

Sale Price 7.35
List Price 14.97
Buy Now
3rd Party 12
In Stock.
See what people are saying about this story or others
See Comments in Forum
Previous Next
Pre-Orders
Tomorrow's latest releases