Ginger who? The incomparable Fred Astaire partners with the equally incomparable tap-dance diva Eleanor Powell in Broadway Melody of 1940, and the result is a dazzling terpsichorean treat! The backstage story may lack bite, but the dancing is divine, especially the breathtaking finale set to Cole Porter's "Begin the Beguine," which stands as one of the finest dance numbers ever filmed. A sparkling transfer struck from a brand new 4K scan of nitrate preservation elements highlights this superior Warner Archive release that also features top-notch audio and all the extras from the 2003 DVD. Highly Recommended.

One of my favorite quotes from That's Entertainment!, the 1974 tribute to MGM's sublime Golden Age musicals, comes from narrator Frank Sinatra as he introduces a clip of Fred Astaire and Eleanor Powell performing a breathtaking tap routine to Cole Porter's "Begin the Beguine" in Broadway Melody of 1940. "You know, you can wait around and hope," Sinatra says, "but I'll tell you, you'll never see the likes of this again."

I've been waiting around and hoping ever since, and just as Sinatra said, I've never seen anything near the likes of Astaire and Powell in perfect sync gliding across an impeccably polished reflective glass floor, their white outfits in stark contrast to a shimmering and sparkling black background, joyously tapping their hearts out to an elegant and peppy jazz arrangement. It's two minutes and 44 seconds of pure magic, and I could probably watch it every single day for the rest of my life and never tire of it. Yes, it's that good. 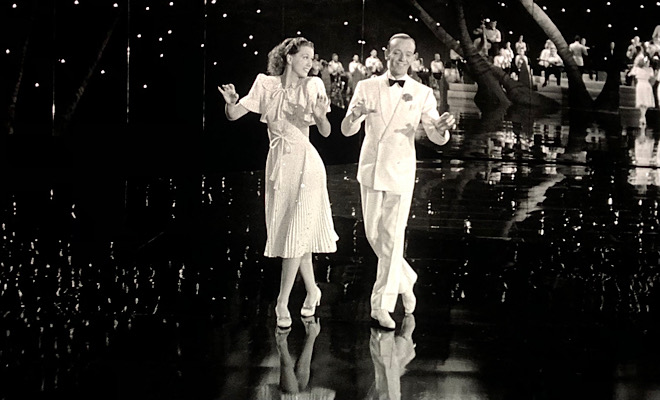 "Begin the Beguine," though, is only one of several dazzling numbers sprinkled throughout Broadway Melody of 1940, the fourth and final installment in the series that began 11 years earlier with the Oscar-winning The Broadway Melody. The 1936 and 1938 editions also star Powell, but despite the participation of such esteemed talent as Robert Taylor, Sophie Tucker, Buddy Ebsen, and a pre-Wizard of Oz Judy Garland famously singing "You Made Me Love You" to a photo of Clark Gable, they pale when compared to director Norman Taurog's take on this backstage musical franchise.

The breezy screenplay peppered with comic accents begins with struggling hoofer Johnny Brett (Astaire) mistaking Broadway impresario Bob Casey (Frank Morgan) for a debt collector. Johnny hopes to give Bob the brush-off by passing himself off as his spendthrift partner and roommate King Shaw (George Murphy), yet little does Johnny know Bob is seeking a new dancer to partner Broadway star Claire Bennett (Powell), for whom Johnny just happens to harbor a monster secret crush. When Bob calls the next day, King answers the phone, then rushes to meet Bob's co-producer, Bert Matthews (Ian Hunter), who offers him an audition.

King, of course, lands the job and must break up his act with Johnny. Adding insult to injury, King also becomes Claire's escort around town to pump up publicity for their new show. A romance develops, but when success goes to King's head and Claire discovers Johnny has been secretly improving their routines behind the scenes, Claire begins to see Johnny in a different light and worries King's egotism and irresponsible party boy antics will sabotage their upcoming opening night. 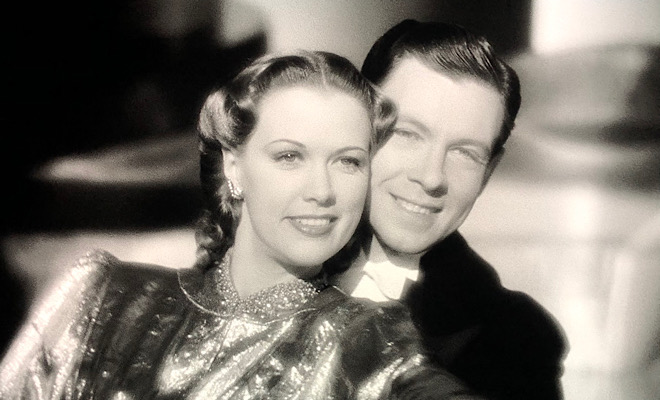 Much like Johnny, Astaire found himself at a career crossroads in 1939. His legendary seven-year, nine-film partnership with Ginger Rogers had just ended and he was weighing his options when producer Jack Cummings approached him for Broadway Melody of 1940. Astaire found the prospect of working with Powell, without question the greatest female dancer of her day, both enticing and daunting, and Powell, who was basically a solo performer, felt the same about Astaire. Their mutual respect soon spawned a fruitful professional union and easygoing friendship, both of which are evident on screen. It's a dream pairing, but like most dreams, it was fleeting. Sadly, despite its big box office success, Broadway Melody of 1940 would be the only film Astaire and Powell would make together.

The anticipation of their first dance keeps us involved in the clichéd plot that nicely strings together an array of thrilling terpsichorean sequences. Astaire and Murphy (a terrific dancer in his own right) kick things off in top hat, white tie, and tails with the energetic "Don't Monkey with Broadway," which contains some of Porter's most inspired lyrical couplets. That's followed by "All Ashore" (the only song not written by Porter), a captivating nautical-themed Powell solo turn featuring frenetic tapping, gymnastic stunts, and a crew of sailors throwing Powell around like a rag doll. Later, Murphy and Powell perform an elegant ballroom routine set to "Between You and Me," during which they slide down ramps and traverse considerable terrain on a stage so massive it would never fit in a Broadway theater, and Astaire dances with a photo of Powell after wistfully singing the lilting "I've Got My Eye on You." 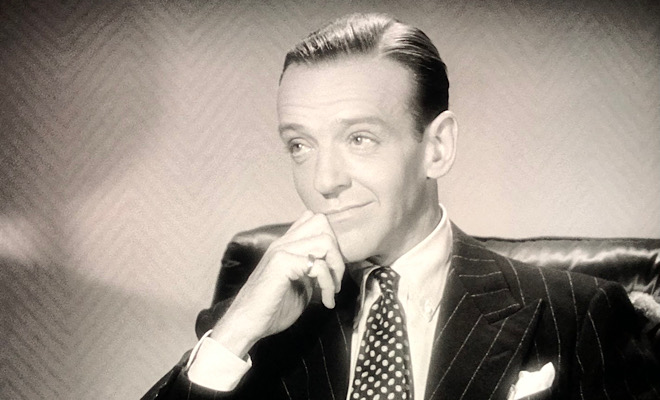 It takes a bit longer before Astaire can partner Powell in the flesh, but the interminable wait is well worth it. At right about the one-hour-seven-minute mark, the two icons finally take their first steps together, pounding out a scorching tap tour de force in a cafe setting. Called, quite simply, "Jukebox Dance," the jazzy boogie-woogie ditty is presented as a casual throwaway, but it's anything but. Energetic yet effortless, syncopated and synchronized, this captivating number whets the appetite for the more elaborate dances to come. Brighten your day by watching it below:

The film's final half-hour is all Astaire and Powell. Though well-executed, a ballet set to the sultry Porter standard "I Concentrate on You" lacks appropriate passion (Powell is graceful, but ballet is really not her bag), but it's just a warm-up for the sumptuous two-part "Begin the Beguine." The first - and longer - segment of the number exudes a distinct Latin flavor with a more disciplined, formal dance that merges tap with ballroom. After a quick break, the duo returns in more comfortable garb and hammers out a routine for the ages set to an arrangement that closely resembles the one popularized by bandleader and clarinetist extraordinaire Artie Shaw.

The dance alone is worth the price of the disc, but there's so much more to recommend Broadway Melody of 1940. The stellar cast (Morgan is especially amusing as the often befuddled Bob), wonderful score, and ritzy production values all combine to create a musical that more than adds up to the sum of its parts. Broadway Melody of 1940 consistently flies under the radar, even with the diehard musicals fans, but stands up quite well to MGM's more lavish and renowned Technicolor offerings, many of which star Astaire. To quote another Porter tune from another Astaire film (Silk Stockings), "glorious Technicolor, breathtaking CinemaScope, and stereophonic sound" all have their place, but when you've got talent like Astaire and Powell, good old black-and-white works just fine. And if you don't trust me, you can trust Sinatra. We will never see the likes of this again. 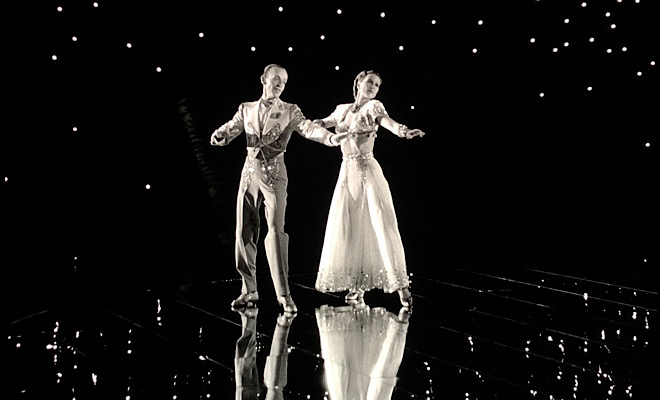 Broadway Melody of 1940 arrives on Blu-ray packaged in a standard case. Video codec is 1080p/AVC MPEG-4 and audio is DTS-HD Master Audio 2.0. Once the disc is inserted into the player, the static menu with music immediately pops up; no previews or promos precede it.

A brand new master sourced from a 4K scan of nitrate preservation elements yields a stunning Warner Archive 1080p/AVC MPEG-4 transfer that makes this sparkling musical truly sparkle. Light yet noticeable grain preserves the feel of celluloid and lends the image a lovely richness, while excellent clarity and contrast produce a vibrant, well-balanced picture. Deep blacks give Astaire's trademark top hat and tails a lustrous sheen, bright whites resist blooming (Powell's toothy grin is almost blinding in its intensity), and nicely varied grays punch up details and enhance depth. The razor-sharp reflections on the glossy glass floor where Astaire and Powell dance "Begin the Beguine" add extra pizzazz to that classic number, and the beautifully crisp close-ups of all the principals ooze MGM glamor. A few shots appear slightly soft, but that's to be expected from a film of this vintage, and nary a single nick, mark, scratch, or errant speck of dirt mar the pristine source material. This transfer definitely improves upon the 2003 DVD, making it very worthy of an upgrade for musicals fans.

Excellent fidelity and tonal depth distinguish the well-modulated DTS-HD Master Audio 2.0 mono track, which really kicks into high gear during the musical numbers. A wide dynamic scale embraces all the highs and lows of the horn-heavy and string-laden orchestrations without a hint of distortion, and though a touch of faint surface noise can be detected during quiet moments, it never distracts from the on-screen action. All the dialogue is easy to comprehend, the vocals are nicely prioritized, and the frenetic tapping is wonderfully crisp and distinct. Broadway Melody of 1940 may be 81 years old, but this age-defying audio track makes it sound decades younger.

All the extras from the 2003 DVD have been ported over to this Blu-ray release.

Fred Astaire will be forever linked with Ginger Rogers, Rita Hayworth, and Cyd Charisse, but the one picture he made with tap dancer extraordinaire Eleanor Powell stands as a milestone in both their legendary careers. Broadway Melody of 1940 may not possess much plot, but the dancing is dazzling, especially the iconic finale set to Cole Porter's "Begin to Beguine." A brand new master struck from a 4K scan of nitrate preservation elements yields a sparkling transfer, top-notch audio adds oomph to the musical numbers, and all the extras from the 2003 DVD make this wonderful Warner Archive Blu-ray a must-have for fans of Astaire, Powell, and Golden Age Hollywood musicals. Highly Recommended.