Treasure of the Four Crowns - 3D

Adventure and excitement come in Three Dimensions with the Tony Anthony Cannon Group classic Treasure of the Four Crowns! Restored in glorious digital 3-D, anaglyph 3-D, and 2-D  from 3-D Film Archive, this film can be a rip-roaring adventure with incredible visuals - or intensely tedious long stretches. Kino Lorber Studio Classics delivers a slick Blu-ray presentation offering three viewing experiences, two audio tracks, and a couple of decent bonus features to pick through. 3-D and Cannon fans have something to celebrate with Treasure of the Four Crowns - Recommended

J.T. Striker (Tony Anthony) is a fortune hunter for hire. No relic or object is out of his reach - for the right price. Now in order to stop a deadly cult, he must gather together a band of skilled hunters for the riskiest job of his career - to retrieve the sacred stones of the Four Crowns. The only problem is the gems are held by a deranged cult in an impregnable fortress filled with deadly boobytraps!

Tony Anthony had a heck of a little career in the ‘70s and into the early ‘80s. He had his own little franchise of spaghetti westerns with The Stranger films. He also helped usher in the resurgence of 3-D with the goofy but highly profitable Comin’ At Ya! Being the studio they were, you can’t fault the Cannon Group for wanting to get in on the craze and help Anthony get his next (and final on-screen role) to theaters in all three dimensions. Unfortunately for Treasure of the Four Crowns, it was a film that was just too little too late.

The 80s briefly saw a glut of new 3-D movies splashing across theater screens with fairly mixed results. Some of them were great like Jaws 3-D, Friday the 13th Part 3-D, and others were less than amazing. Treasure of the Four Crowns sadly falls on the latter side of the spectrum. One of the last 3-D films to hit theaters in the 80s, it was too late for the craze its own filmmakers helped spawn. An adventure film, it tries to recapture the magic of old serialized chapter stories but Indiana Jones - and many others - beat it to the punch. If those strikes weren’t enough, this film can be painfully dull for long stretches, especially if you’re watching in 2-D. 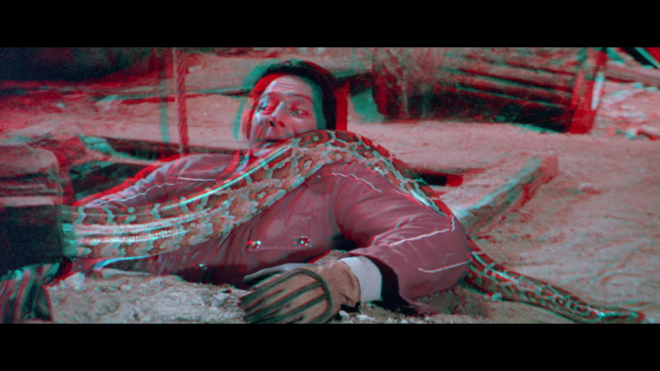 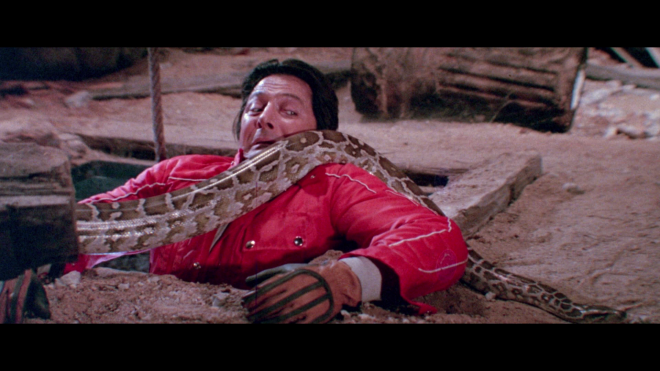 Clearly shot to exploit all three dimensions, the film offers plenty of eye-jabbing action, often in slow motion. And it can be exciting stuff, but whatever gimmick is on screen, it can run itself into the ground - including the fiery explosive finale. If you’re unfamiliar with the movie, to give you an idea of what to expect, Tony Anthony fights vultures, dogs, and a boa constrictor within the first ten minutes before raiding a haunted tomb. Now, this film is ultimately a heist film, Anthony and his merry band of fortune hunters has a job to do - so when they finally get to the cult’s castle and start their plan to extricate the jewels, the film picks up and the 3-D visuals are fully exploited. It just takes over half the film to get there! So if you can make it that far you're in good shape for the final run.

That isn’t to say Treasure of the Four Crowns isn’t a fun movie - because it is. Like so many films to come through the Cannon machine, it’s a bit of a mess but it’s worth playing with. Tony Anthony is his usual everyman unflappable self. Emiliano Redondo may not get a whole lot to do as the villainous cult leader Brother Jonas, but he chews the scenery with the best of them. I've always wondered if his evil triangle insignia was a callback to Cannon's failed biblical sci-fi musical The Apple or if it was just a happy coincidence. At the end of the day though, this movie is all about the visuals, and without a 3-D presentation, the film really suffers. But if you’re rocking digital 3-D or this disc’s included anaglyph presentation you’re in for a treat.

Vital Disc Stats: The Blu-ray
Treasure of the Four Crowns arrives on Blu-ray thanks to Kino Lorber Studio Classics with restoration work by 3-D Film Archive. The disc is housed in a standard case with o-card slipcover. If you’re rocking a projector or screen that supports 3-D, the disc will load direct to digital 3-D as its presentation option. From there you can select if you want to see the Anaglyph 3-D version or the 2-D version of the film. Once you’ve squared that away you can change your audio option, turn on the commentary track, or hit the film’s bonus features. 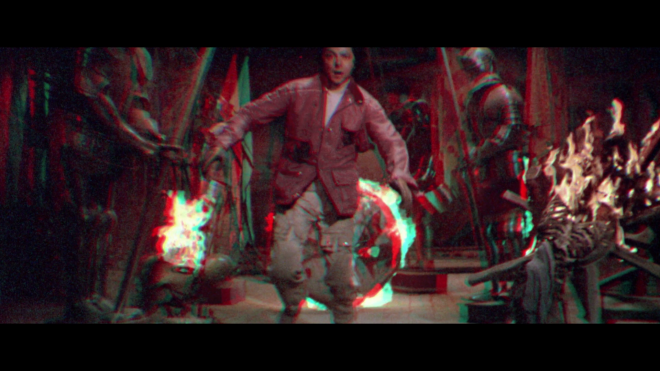 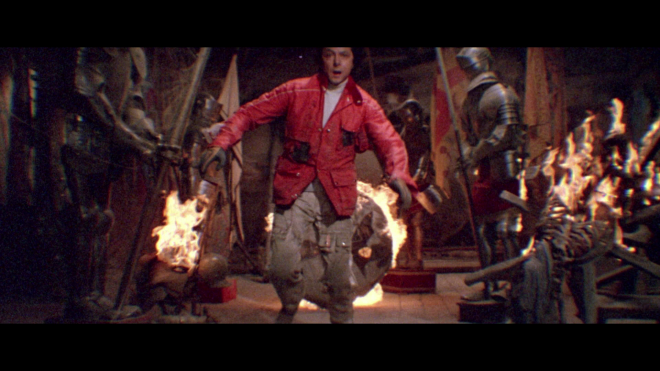 Like so many 3-D films, Treasure of the Four Crowns wasn’t exactly well cared for over the years but once again 3-D Film Archive has done another masterful restoration job bringing three presentation options for fans' eyeballs to digest. There are some rough spots throughout the film - namely whenever there is any kind of optical visual effect. The credits are particularly rough and don’t lend themselves well to the overall 3-D presentation and some visual effects are a bit rough with speckling and scratches. Nothing severe but not quite pristine either. Other areas have some small nicks and scratches but not enough to be too distracting. When it’s at its best, it’s really impressive with clean crisp details, a naturally cinematic grain structure, and some bold colors.

The digital 3-D presentation is the best option. And while stretches of the film can be pretty boring, the use of slow-motion was actually a smart one for capturing 3-D imagery and minimizing eyestrain. There are some beautifully vivid sections with deep image depth along the z-axis. Protrusion effects are convincing enough popping out of the screen nicely. Depending on the type of digital 3-D you’re rolling you may experience some slight parallax or ghosting, but that’s only an issue when something is quite literally popping out of the screen. There are some great uses of 3-D with some dull ones mixed in. This movie really likes to watch people hand other people unimportant things again…and again…and again. However, there are some genuinely exciting places and the film’s second half and the show really does save its best for last! 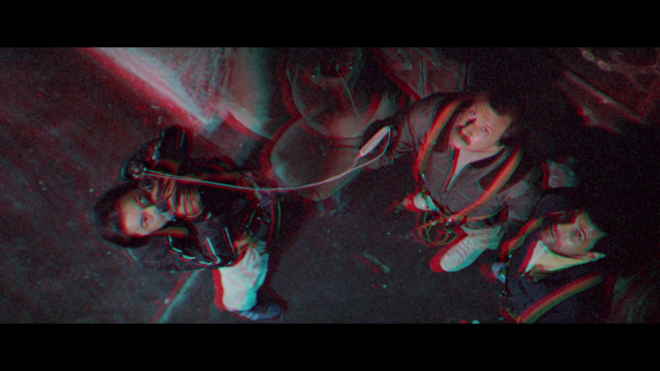 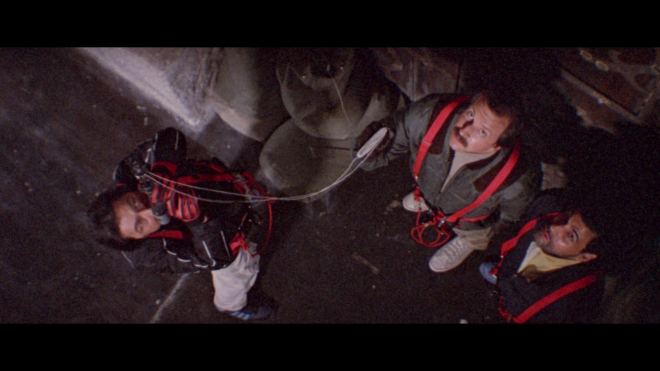 3-D Film Archive also restored the film for Anaglyph (red/blue) 3-D, so if you don’t have a digital 3-D screen or compatible projector, you’re not left out. I’ve mentioned in past reviews Anaglyph doesn’t agree with my migraines, but 3-D Film Archive’s process pulls a lot of the eyestrain out and creates a fully appreciable 3-D effect. You’re obviously not getting all of the true colors you would have with polarized glasses, but you’re at least getting to experience the film as it was intended.

And again, 2-D is an option, but I wouldn’t recommend it. That isn’t to say it looks bad, again like I mentioned for the digital 3-D portion the image can look quite spectacular, it’s just painfully dull in 2-D. If you thought Zack Snyder used too much slow-mo you’re in for it with this one! In 3-D these scenes looked great and were actually exciting, in 2-D so many segments are just daftly boring. For better or worse The Treasure of the Four Crowns depends on 3-D to make it watchable as a film that in 2-D I fear you wouldn’t make it to the incredible finale without taking a snooze. 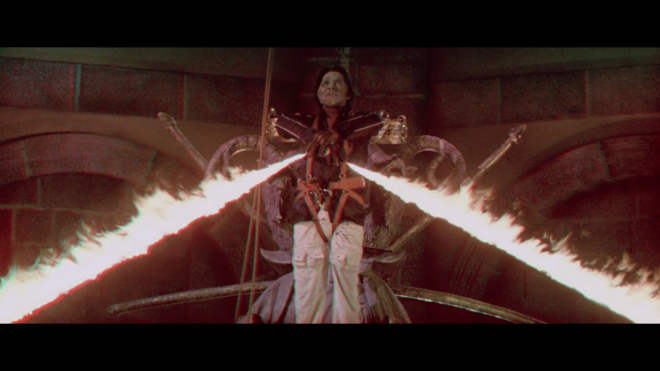 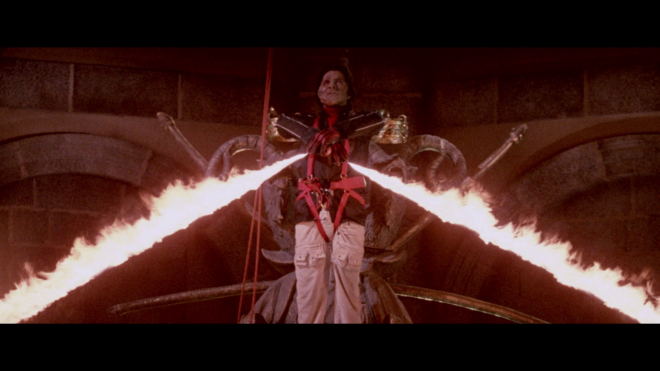 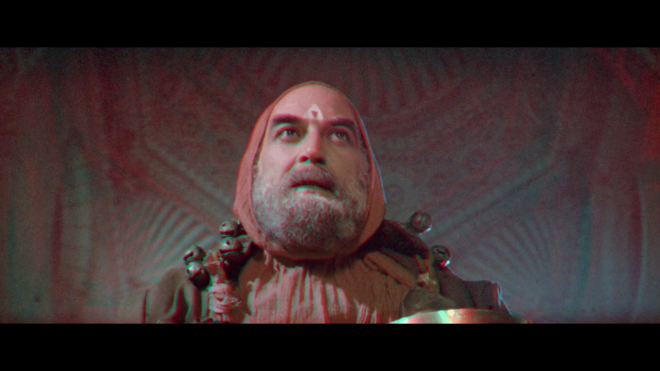 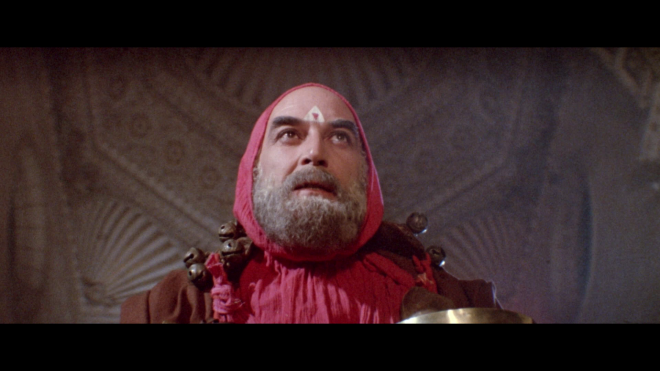 Fans get two audio options here, a DTS-HD MA 2.0 track and a DTS-HD MA 5.1 track. Both are great so it comes down to dealer’s choice. I found the 5.1 track to be particularly lively and engaging. It may be more front/center loaded much of the time but when the action picks up those surround channels kick in nicely. Both tracks offer up clean and clear dialog - this being an Italian/Spanish production there is a bit of overdubbing for some of the actors and that can create a bit of a flat dull feel for the mix at times, but there are enough action effects and the film’s grand score to punch things up and fill up the soundscape. 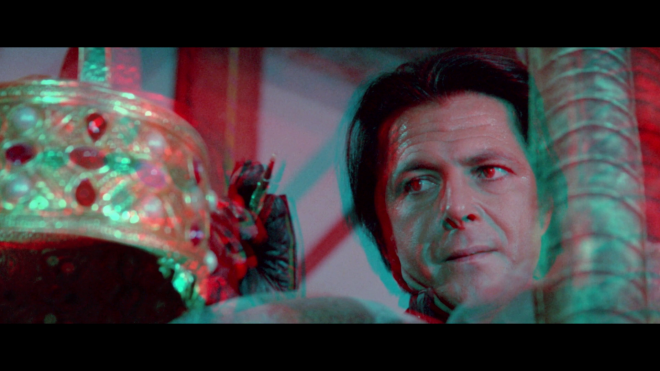 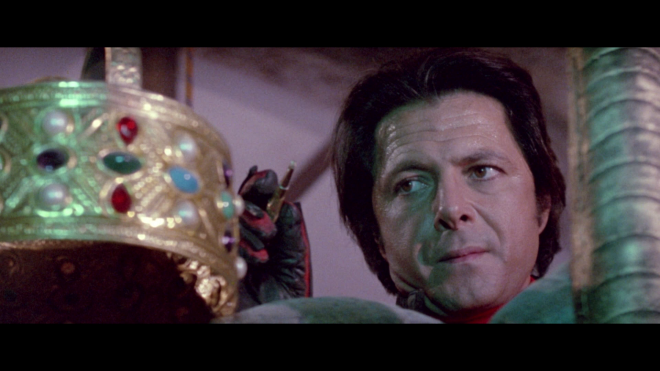 Given you’re getting a Digital 3-D and Anaglyph 3-D presentation on the same disc, there wasn’t a lot of room left over for bonus features. The audio commentary is interesting and worth the listen for the curious out there and the Tony Anthony interview also has its highlights, it’s just a shame it’s audio-only because he seems like he could be a pretty animated personality.

Treasure of the Four Crowns will never be accused of being a great movie. If it had been, maybe 3-D films of the 80s wouldn’t have died out when they did. As it stands it’s a fun little adventure flick with a lot of high-stakes action and a goofy sense of humor - but it really only watchable in 3-D, 2-D just feels particularly dull. Thanks to Kino Lorber Studio Classics and the excellent restoration work from the crew at 3-D Film Archive, Treasure of the Four Crowns can finally be experienced at home the way it was meant to be. You have three ways to watch the film - Digital 3-D, Anaglyph 3-D, and of course 2-D, but you also get two audio tracks to work with depending on your home setup. Bonus features may be slim, but they’re at least informative and worth digging through. It may be a daffy film but if you’re game it’s entertaining. Recommended.