The serial killer genre is slaying it these days as it has been over the past few years due to a multitude of true-crime docuseries and the treasure trove of podcasts that tackle this terrifying subject. Warner Bros. is delivering a new feature film in this classic genre called The Little Things that takes a somewhat different approach to the serial killer realm, along with its triple threat championship cast of Denzel Washington, Jared Leto, and Rami Malek. The Little Things has a lot of atmosphere, highly suspenseful situations, and one sadistic serial killer going for it until it doesn't and goes in a completely different direction for better or worse. Still, there are a few things that are worthy of note in this film that seems to be a repetition of everything that's come before it but then goes after a taboo subject in a strange sort of way to finish itself out. Recommended! 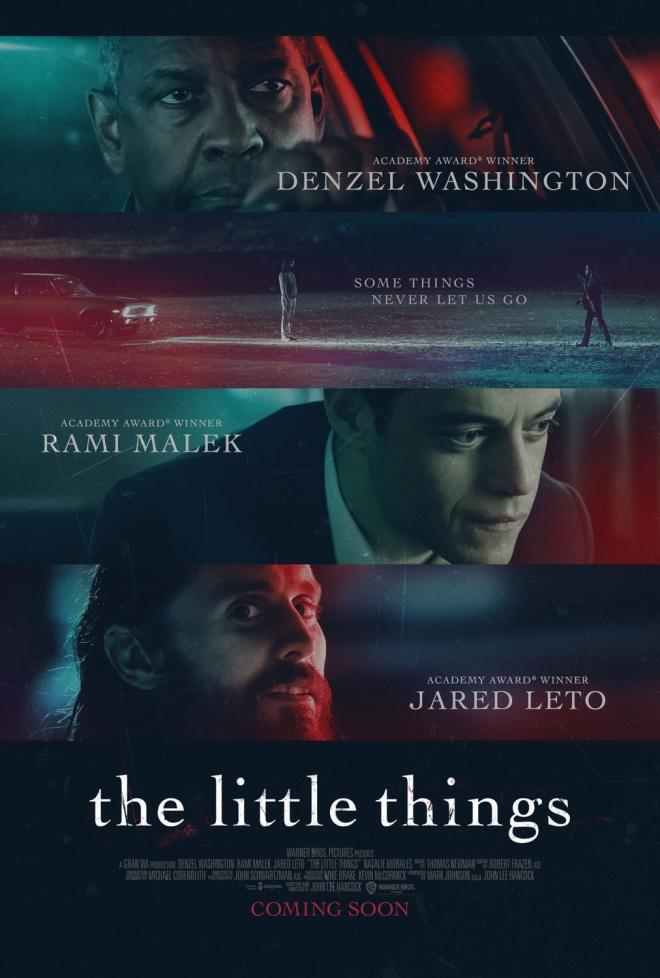 First off, there is some folklore with this film that goes back all the way to 1993. This film was written by John Lee Hancock back in the early '90s, specifically for Steven Spielberg to direct, but he ultimately decided against it due to the extremely dark nature of the film. Over the years, the likes of Clint Eastwood, Warren Beatty, and Danny DeVito were all at some point attached to direct this film, but ultimately none of that happened. Hancock though ended up making The Blind Side and Saving Mr. Banks in the meantime, which eventually led him back to his 1993 script that everyone seemed to pass on and directed it himself. A perfectly capable filmmaker taking his written word and projecting it to the big screen is sometimes the ultimate goal, but maybe too much time had passed. Since so many serial killer films have been in the mainstream, The Little Things doesn't have quite the impact as it might have if was made back in the 90s.

In fact, The Little Things is eerily similar to David Fincher's Se7en in more than a few ways. Since that film, several directors have perfected the art of the serial killer story and tone. With the first two acts of The Little Things, it follows that formula to a tee and it succeeds in its haunting atmosphere, tense situations, and even relationships within the police department and families. The film follows Kern County Deputy Sherriff Joe Deacon (Denzel Washington), who is an older homicide detective who is basically retired to a rural county, dealing only in minor crimes. He is asked by his captain to head to Los Angeles to run a simple errand on a serial killer case that might have something to do with a previous case he was part of many years prior and has left him a broken man.

Once in LA, he runs into hotshot rookie detective Jim Baxter (Rami Malek), who is the lead in apprehending a serial killer on the loose in the city. At first, there is tension between the two, but shortly after, their two ways of working on cases combine in a team effort to catch this monster, who they both believe to be a guy named Albert Sparma (Jared Leto), who is as creepy, and scary as they come when it comes to sadistic murderers. Throughout the film, there are a few flashbacks that hit on Deacon's previous serial killer as he struggles with his demons from his past that seems to be catching up to him around every corner.

Then the final act comes through and two things happen. One is that the characters start to react to situations in a completely bizarre way that would have the film jump the proverbial shark and make zero sense at all for the remainder of the film, disobeying almost every rule and story piece that came before it. The second is a better scenario where The Little Things crosses over and dives into territory that isn't really covered in too many films - being how police officers and those they work closely with might ignore the law and all pretend to be on the same page of a false and fake trajectory in order to protect one of their own from a mistake. And that is highly fascinating, but it's not executed in a great way as it just continues to fumble on itself until the movie just ends.

It's almost as if there was a certain direction this film was going and then since it took so many years to get made, other films and filmmakers created what this film was supposed to do, which led to some sort of incoherent third act that doesn't make a lick of sense. Denzel is still great in every role he takes on, and here he is mostly stoic and quiet, still internally fighting his demons off from his past. Rami is very low-key here as he is in Mr. Robot too but still delivers a good performance.

Jared Leto is the one who shines as a man who is just downright scary. His physical appearance is unsettling as is his walk, his body language, and his delivery, which just emotes that of someone who is completely gone from reality. It's a remarkable performance as Jared continues to surprise with such diverse roles - and he's absolutely excellent in this. Thomas Newman's score is pitch-perfect too that brings in all of the haunting and chaotic musical cues that go perfectly with this type of film and is quite memorable. Visually though, there's nothing that stands out other than its characters. Again, The Little Things will have its audience on board until it doesn't in the third act. Recommended!