When Walt Disney's daughters begged him to make a movie of their favorite book, P.L. Travers' "Mary Poppins," he made them a promise - one that he didn't realize would take 20 years to keep. In his quest to obtain the rights, Walt comes up against a curmudgeonly, uncompromising writer who has absolutely no intention of letting her beloved magical nanny get mauled by the Hollywood machine. But, as the books stop selling and money grows short, Travers reluctantly agrees to go to Los Angeles to hear Disney's plans for the adaptation. For those two short weeks in 1961, Walt Disney pulls out all the stops. Armed with imaginative storyboards and chirpy songs from the talented Sherman brothers, Walt launches an all-out onslaught on P.L. Travers, but the prickly author doesn't budge. He soon begins to watch helplessly as Travers becomes increasingly immovable and the rights begin to move further away from his grasp. It is only when he reaches into his own childhood that Walt discovers the truth about the ghosts that haunt her, and together they set Mary Poppins free to ultimately make one of the most endearing films in cinematic history.

You won't see the familiar disclaimer 'based on a true story' at the beginning of 'Saving Mr. Banks', perhaps because if a movie tackled the complete relationship between icon Walt Disney (played here by Tom Hanks) and 'Mary Poppins' writer P.L. Travers (Emma Thompson), it wouldn't make for much of a 'feel good' flick. Instead, what we get here is more sanitized version of the truth, with some effort by the filmmakers to humanize one of the leads. No, I'm not talking about Walt – I'm talking about Travers herself, who was reportedly even more harsh and abrasive than this movie portrays her.

As 'Saving Mr. Banks' begins, we learn that Travers has agreed to consider signing over the rights to 'Mary Poppins' to Disney, but is having second thoughts about the meeting. She has Disney's promise that she will have final say before anything gets approved for the film, which leads to much heartache among the preproduction crew once Travers arrives in Los Angeles. She insists that the film not be a musical, not feature any animation, and don't even get her started about Dick Van Dyke.

The movie reveals in flashback sequences why Travers is so opposed to anyone changing the basic themes of her original story. We see her as a young girl (played by Annie Rose Buckley) in Australia having to cope with a father (Colin Farrell) that loves her very much, but also is struggling with a horrible addiction to alcohol that leads to one disastrous event after another for their family.

'Saving Mr. Banks' deviates the most from the actual story towards the second half of the film, where Travers begins to soften up in her hatred of the new movie, and ol' Walt and his staff slowly start winning her over. In the film's best scene (which actually never happened in real life), Disney flies to England to talk to Travers (who has abandoned the movie) and tells her a story about his strict father and his upbringing in Kansas City. The story about Walt's father is reportedly true – the idea that he ever told Travers such a thing is not (and Walt never flew overseas to see her). But this is, after all, a Disney movie, and characters have to have an arc and learn something about themselves before the credits roll. So, while Disney and Travers may have never really had that heart-to-heart talk with each other, and while Travers may have never really been happy with the 'Mary Poppins' movie, the film did get made, which at least indicates there was some meeting of the minds on both sides to make it happen.

As a whole, I have rather mixed feelings about the movie. Its primary problem is that, because we already know the outcome (really, you don't think 'Mary Poppins' is going to get made?!), there's very little in terms of suspense on part of the viewer. The big question then becomes why Travers is so opposed to others tinkering with her story, and that's pretty much given away by the movie's title. Therefore, we're only left with the (quite excellent) performances by Hanks and Thompson, which are a joy to watch – but ones where we're also always aware of what the eventual outcome is going to be.

While every scene that Hanks and/or Thompson is in is fun, not so impressive (at least from a storytelling standpoint, since the cinematography is beautiful) are all the flashbacks that involve Colin Farrell's character. I've never been a huge fan of Mr. Farrell as an actor, and while his performance here is serviceable, I'm not sure such a big chunk of the movie should have been dedicated to his story. It's not hard to figure out what's going to happen in the flashbacks or what their purpose in the movie are, so had they been cut in half, I think 'Saving Mr. Banks' could have been a much stronger film. There are very few instances in the movie where during the flashback scenes I didn't want to get back to what was going on with Disney and Travers as soon as possible.

'Saving Mr. Banks' is certainly a watchable film. The problem is, I'm not sure how 'rewatchable' the movie is, which makes it really hard to give it a recommendation. Fans of Disney history will certainly eat this one up, as it's loaded with the kind of attention to detail of the studio's history that die-hards will love. Taken as a whole, though, I think for most potential viewers the route here is to rent the movie first and make a purchasing decision later.

'Saving Mr. Banks' arrives on Blu-ray in a standard keepcase, which house the 50GB dual-layer disc, along with an insert with a code that can be used for both a digital copy of the film, as well as for Disney's Movie Rewards program. When loading the Blu-ray, the first thing viewers will see is a screen asking them to pick a language. The Blu-ray is front-loaded with trailers for (naturally) Mary Poppins, 'Maleficent', and a non-smoking ad featuring Eugene Levy. Note that the two front-loaded trailers are also available on a 'Sneak Peaks' option on the main menu, which also includes ads for Disney's Movie Rewards program, Disney's theme parks, and Sleeping Beauty (which has been in the 'Disney Vault' for a while, but is getting a new 'Diamond Edition' release in the fall). The main menu itself consists of footage of the tape recorder used by Travers in the movie to record all the conversations during preproduction. It's the same image that appears over the end credits of 'Saving Mr. Banks'. 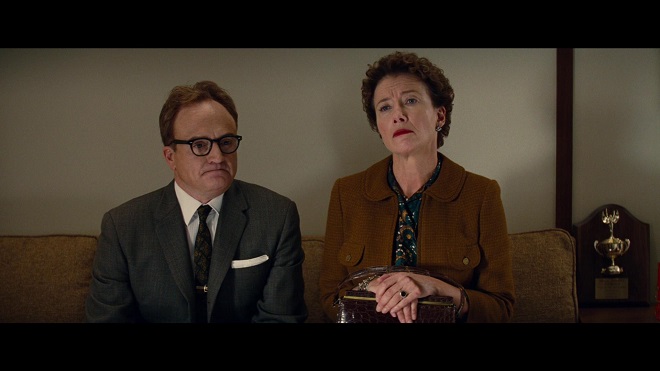 Because so much attention to detail has been made in 'Saving Mr. Banks' to make Disney Studios look like the Disney of the 1960s, I was really hoping for a great transfer of this film, and was not disappointed. One of the smart things Disney did with the movie (reportedly at the request of the director) was to shoot 'Saving Mr. Banks' on 35mm film, rather than digitally. The result is a picture with a really lush look to it (adding to the historical feel), while still containing the kind of clarity and sharpness we expect on the Blu-ray format.

While skin tones lean slightly on the warm side, they're consistent throughout. The flashback scenes that take place in Australia seem to be dialed back just an almost imperceptible notch in color, but are also a little brighter overall, no doubt to give those segments in the movie both a more 'older' feel than the primary storyline and acknowledge the fact that they are a memory from the main character. The sharpness of the picture (which still retains grain, but has been pushed nicely to the background and is almost undetectable) really pays off in some of the Disney studio scenes, as viewers can make out a wealth of little trinkets and 'Easter Eggs' in the background – lots of them references and nods to other Disney movies. Black levels are remarkably inky and deep, and viewers should have no problems picking up detail in even the movie's darkest of scenes.

In terms of glitches, I didn't spot any – and the picture appears to be free of any aliasing, banding, or compression issues. In short, this is a wonderful looking release and impressive enough that I'm ranking it as reference-quality.

The English 5.1 DTS-HD Master Audio track is as delightful in quality as the video, and while a great deal of the surrounds are used for ambient noise, the speakers do come to life during the various musical bits in the movie – be they the Sherman brothers testing out a new song, or just the use of composer Thomas Newman's score in the background.

Everything is well balanced here, and there's some occasional use of directionality, although the dialogue remains pretty much front and center throughout the film. Everything is crisp and clear and I detected no glitches whatsoever in the track. Because of the tone/events in the movie, this is one of those audio experiences that most viewers may not immediately note of the quality of, but one that is nevertheless quite well rendered.

In addition to the lossless 5.1 track, a 2.0 English Descriptive Video Service track is provided, as are both Spanish and French 5.1 Dolby tracks. Subtitles are available in English SDH, Spanish, and French. 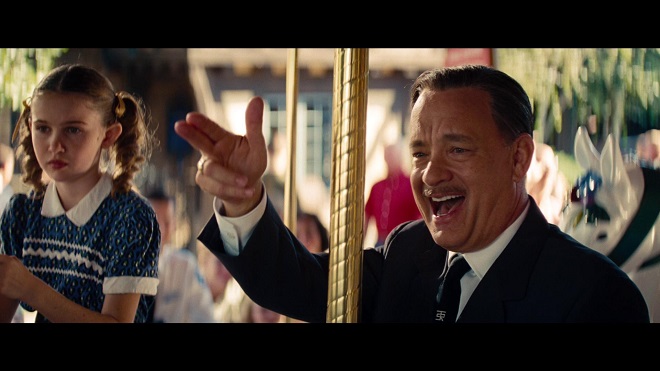 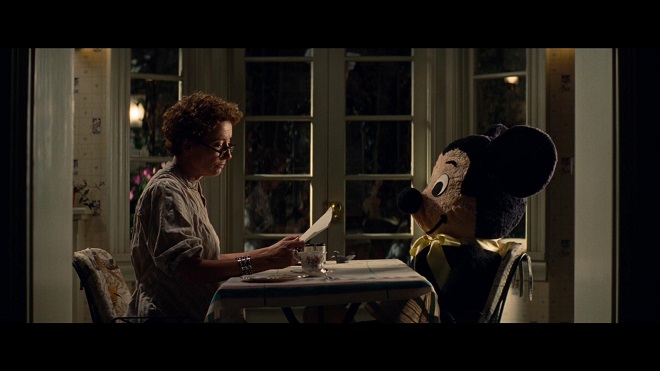 'Saving Mr. Banks' is a remarkably well-made and well-acted movie that, sadly, suffers from some script and pacing problems. The fact that we know the outcome before even starting the film doesn't help matters, nor does the fact that its title immediately gives away the main character's reasons for her protectiveness of her story. However, both Emma Thompson and (particularly) Tom Hanks are so good in their roles, I would be remiss not to say that 'Saving Mr. Banks' is worth seeing. Therefore, I recommend renting this one first before deciding whether to buy.

Sale Price 12.88
List Price 26.5
Buy Now
3rd Party 3.99
In Stock.
See what people are saying about this story or others
See Comments in Forum
Previous Next
Pre-Orders
Tomorrow's latest releases