There is a 7th installment of the Wrong Turn franchise in the form of a reboot, simply titled Wrong Turn that follows a group of young adults as they hike in the mountains and cross paths with a sadistic group of people called the Foundation. Instead of backwoods cannibals, this new film takes a new and maybe even more horrifying route with new scares, bloody deaths, and some good performances. The video and audio elements are truly satisfying and the extras are worth this time. HIGHLY RECOMMENDED! 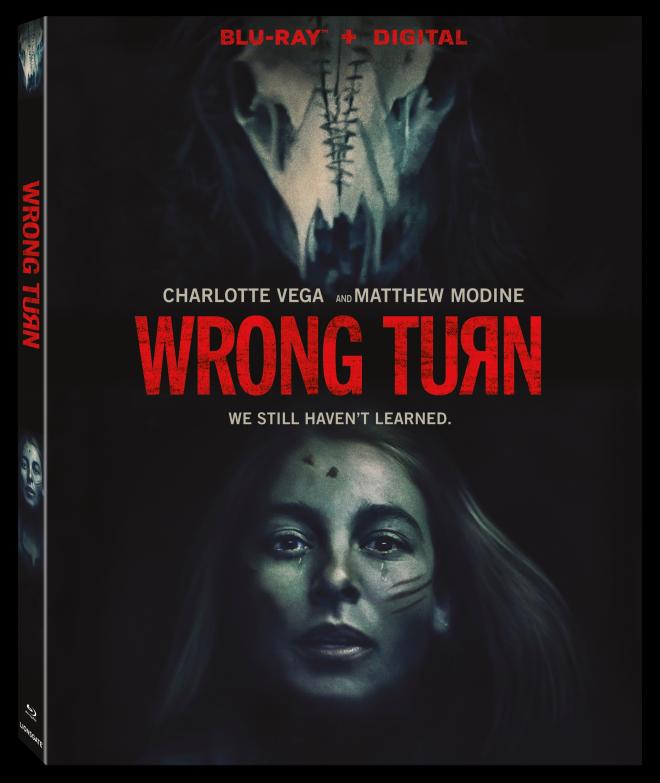 It's been 18 years since the horror universe of Wrong Turn graced movie screens across the nation, setting up a franchise of six feature films that mostly covered cannibalistic hillbillies, preying on unfortunate souls in the middle of the wilderness. Now though, there is a seventh installment that completely reboots the franchise in a fresh and original way that brings new elements of horror and terror with Wrong Turn in 2021. This horror franchise has a new lease on life with some great modern takes, a brand new story that could expand into several more films, and all the bloody carnage a horror-buff could want -and of course a great performance from Matthew Modine. This new Wrong Turn movie impresses as much as it scares as the film follows six people, hiking in the wild, only to cross paths with some unsavory people.

Director Mike P. Nelson has a remarkable way of setting up certain sequences that pay off big by the end of the film in ways that are not entirely expected and has a fully-fledged-out origin story of the villains in this film. Wrong Turn introduces six friends who are on vacation, looking to hike the Appalachian Trail. All seems great at first, but sooner rather than later, there is strange folk spying on them in the woods, stealing their belongings, and even setting some brutal traps along their path. What looks like a run-of-the-mill horror movie that is similar to the previous Wrong Turn movies, turns into something much better with depth and history.

It turns out these people who are hunting the six hikers belong to a very old community called The Foundation, who treat outsiders, hikers, and vacationers harshly and with the most extreme brutality. Those lucky enough to make it out alive are forced to live in this horrifying community that is right out of the middle ages. Meanwhile, back in the real world, one of the hiker's wealthy father (Matthew Modine) starts to investigate the disappearance of his daughter and sets out to find her, leading into another perilous journey into this mad world of The Foundation.

The writer of the original 2003 film Alan McElroy returns for the first time to his franchise that he helped create and breathes new air into this story. With all of the creative gore and kills, along with the new Foundation angle, McElroy has not lost a single beat with his horror roots, providing new ways to scare people in this film. With his script and Nelson's great eye behind the camera, capturing these characters as they struggle to survive and transform into something unrecognizable is pure horror bliss. With its tight and constraining budget, Nelson, along with the rest of the crew expertly utilizes every dollar to make this low-budget film look like a major production, never skimping out on any of the carnage and relying on mostly practical effects, which is always satisfactory. The score and music cues always add that sense of terror around every corner as well.

There's a ton to love about this reboot of a fan-favorite franchise, which not only tells a different story but goes down a new path while keeping certain elements alive from the original film. The performances by everyone involved are fantastic and the undeniable twists and turns are earned and wonderfully chaotic. This Wrong Turn reboot is the start of something special with the hopes of more films that dive into this new Foundation settlement.

Wrong Turn hikes its way to Blu-ray+Digital through Lionsgate. The disc is housed in a hard, blue plastic case with an insert for the digital code. There is a cardboard sleeve as well that features some fun artwork from the film. 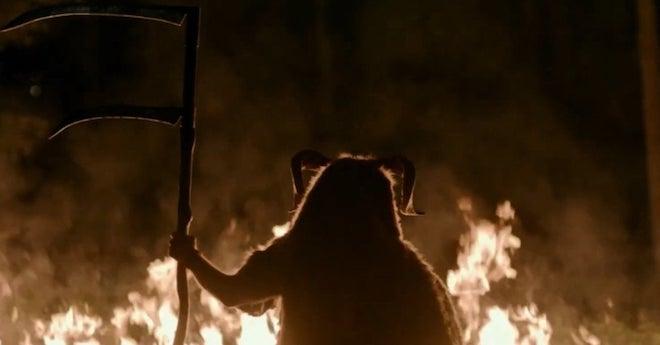 Wrong Turn comes with a 1080p HD transfer and is presented in 2.39:1 aspect ratio, all of which look great in its color palette and detail. The colors during the exterior daytime sequences look fantastic and are rich with natural blue skies, green trees, and a variety of bold colors in the character's wardrobe. Once on the hike, the color switches to a cooler style with more greens and blues that pop up. When arriving at the Foundation, big areas of orange, red, and yellow take up the screen due to the fires and flames that dominate the image, giving way to a much more amber-coated picture. Of course, there are varying levels of red blood the soak the surroundings, which is always nice to see.

The detail is sharp and vivid for the most part, showcasing great closeups of gory wounds on the actor's faces, individual hairs, makeup effects, and pores that are easily seen. The textures in the trees, caves,  built sets for the Foundation, and even the tents look wonderful here. Certain gore effects can look a bit gritty, but other times, the detail is so vivid that one might lose their lunch if they press the pause button at the right time. It's that good. Black levels are consistently deep and inky and the skin tones are always natural. There were no major issues with any banding, aliasing, or video noise either. 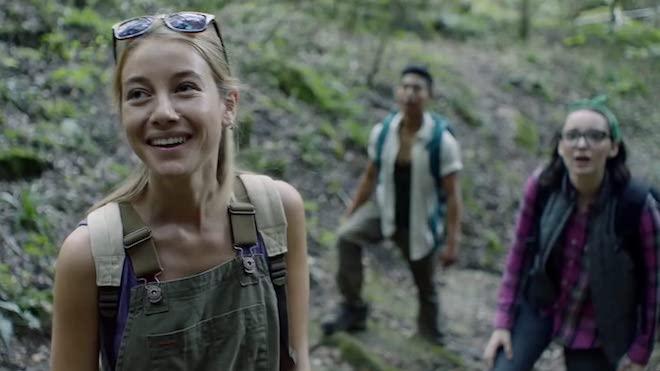 This release comes with a fantastic lossless DTS-HD MA 5.1 audio track that checks all the boxes for a horror film. Sound effects are robust and loud from start to finish and really kick into high gear during the hiking sequences in the middle of the forest. Wildlife, leaves rustling, blowing wind, and footsteps all make this soundscape more intense and with the use of some lurking noises in the rear speakers, it all creates an amazing immersive experience.

Ambient noises at the local rural bar are very good with people chattering, playing pool, and the jukebox blasting, but it's with the stab, swing, chops of knives, and other primitive weapons that really make their mark on this sound field. It's truly a marvel. The score always enhances the suspense and the dialogue is always crystal clear and easy to follow along with, free of any audio issues. 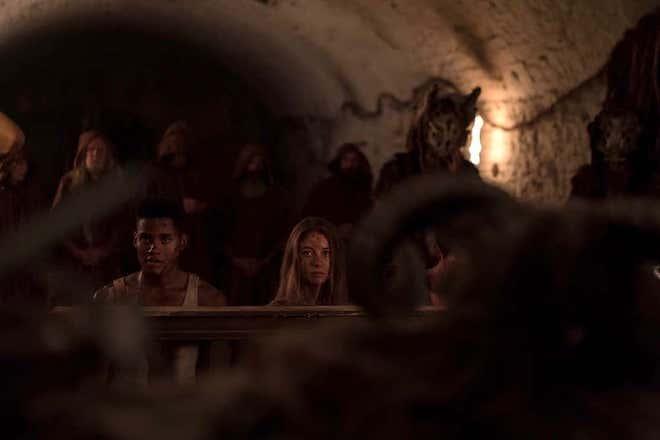 There are about 39 minutes of bonus material located on his Blu-ray Disc, including behind the scenes, deleted scenes, and promo trailer, and. great audio commentary. 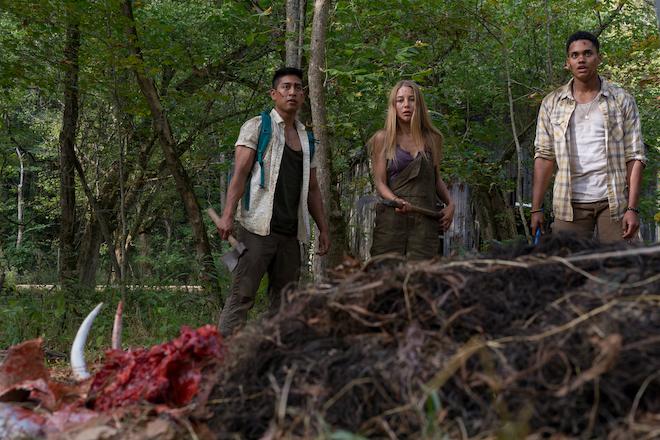 Wrong Turn delivers new thrills and chills in this reboot that could and should explore its new territory in future films. With good performances, wonderful gore, and some wild horror, this film succeeds on all fronts. The video and audio presentation are both top-notch and there are some better than average bonus materials that come with this release. HIGHLY RECOMMENDED!