When a franchise has been stretched beyond its theatrical beginnings into the multitude of direct-to-video sequels - it's time for a reboot!  Wrong Turn - gets a complete reimagining that aims for the classic Murderous Cult instead of the mutant Hillbilly Horror sub-genre. Screenwriter of the 2003 original Alan McElroy returns with director Mike P. Nelson to give the franchise a fresh direction forward but ultimately the show doesn't travel a new trail as a group of friends goes missing hiking the Appalachia Trail. Overall the film works, delivers some gore-fueled scares, but pacing is a problem and the film runs far too long padding out material that would have enjoyed some slashing. Wrong Turn is getting a One-Night only theatrical release via Fathom Events. Tickets can be purchased through Fandango - Worth A Look

Young, fresh out of college friends will do what they always do - travel to a remote place where no one has been before and go for an adventure hike well off the beaten path. That's exactly what Jen Shaw (Charlotte Vega), her boyfriend Darius (Adain Bradley), and four of their friends are about to do along the Appalachia Trail. Warned by the seemingly ignorant redneck locals to hire a guide or stay on the path, Jen and her friends instead hunt to find a lost Civil War fort. Instead of finding a historical relic, they descend into a nightmare world where a cult has thrived in isolation for generations - and will do anything to protect their way of life. 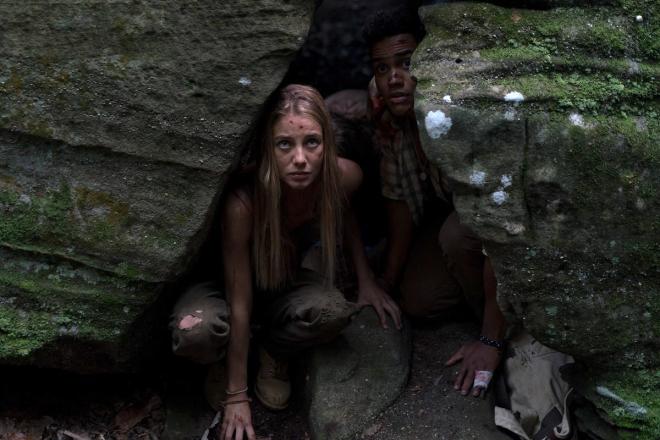 The franchise relaunch is always a tricky prospect. It's one thing if the property has a massive devoted fanbase like Halloween that longs to see the primary villain come up with new ways to do essentially the same thing over and over again. It's something else when the concept of the franchise was already straining under the weight of direct-to-video sequels and knockoffs. 2003's Wrong Turn helped kick off the return to Hillbilly Horror that hadn't really been experienced since the 70s. Taking a page from the terrifying episode "Home" from the fourth season of The X-Files, the original film focused on an inbred family of mutant hill folk cannibals and the following five sequels ground that concept into the ground with little variation or fanfare.

2021's Wrong Turn takes a page closer to Ari Aster's dark comedy/horror hybrid Midsommar and other murderous cult flicks than the expected mutant cannibal hillbillies. Which turns out to be a clever avenue to explore, even if it's not altogether fulfilling. Original series screenwriter Alan McElroy earns worthy props crafting a scenario worth exploring. The script establishes a culture for this cult and a way of life they believe is right and Bill Sage makes a creepy turn here as the leader of The Foundation - John. Pulling some characteristics of cult leaders ranging from Jim Jones to Roch Thériault, he's equally menacing and charismatic. Jen and her friends end up playing a high-stakes game of cultural anthropology where the slightest grievance could end in death - or something far worse. And I do mean it that way. Those who die, thankfully die fast. Those who don't - well, that reveal is one of the creepiest most unsettling things this movie has to offer. If only there were more moments like that we'd have something special here.

While I would call this an overall successful reboot of the Wrong Turn franchise - it does enough different to make it worthwhile - my principal complaint is the length. At just under two hours, it's about fifteen minutes too long for its own good. Director Mike P. Nelson and his editors just don't manage the pace to drum up genuine suspense or the intended scares to have much impact. Conversations that don't mean anything last far too long where essential pieces of dialog for character and plot are shortchanged.

The film's opening with Matthew Modine as Jen's father Scott trying to figure out where she disappeared doesn't need to be there at all. Once that intro is done the next hour plays as a flashback to "six-weeks earlier." Then it picks back up with Modine and his search for Jen now that we know where she is. Given the movie's title that intro is just wasted screentime. The audience already knows bad things are going to happen; the opening only delays the inevitable without adding anything.

Characters are also on the painfully thin side - again, playing to genre tropes. Charlotte Vega and Matthew Modine carry most of the dramatic weight with an appreciable father/daughter dynamic. Again, Bill Sage is an ominous presence and Daisy Head earns high marks as the creepy Edith. The rest of the cast is there to fill time until they're appropriately 86'd in gloriously gory ways. And while there is ample gore, we don't really care enough about the characters for any demise to be meaningful or all that shocking. When Jen and her friends call out the names of the friends gone missing, you're constantly replying "who?" They could have easily been named after their character archetypes "The Jerk," "The Priss," "Gay Guy 1," "Gay Guy 2", and "Boyfriend" for how simply defined they are. You know who is going to die and how badly pretty much as soon as you meet this troupe of traveling friends.

At the end of the day I was entertained by this new spin for Wrong Turn - a franchise I basically gave up caring anything for around when the second sequel hit video store shelves. This film doesn't do anything new to the genre, but for the series, it's a notable refresher. Between this series' sequels and the recent Hills Have Eyes, on top of the remake series of I Spit On Your Grave, it was long past time to bury Hillbilly Horror and let that genre corpse rot a little before digging it up again. If Wrong Turn 2021 was just a little bit leaner it'd play a bit meaner and give horror hounds some more meaty scares to sink their teeth into. It's certainly a better movie than any of the past direct-to-video sequels but that may not be a strong enough recommendation.

In the last seventeen years, the Wrong Turn franchise has run the cinematic gauntlet. It started with a solid creepy first film but endured through a series of haphazard (at best) direct-to-video sequels that strain to keep the name alive in the minds of horror fans. Now we find ourselves with a reboot that shakes things up dramatically for the franchise moving away from Hillbilly Horror and into the Murderous Cult sub-genre. And it works for the most part with Matthew Modine making a fine Action-Dad, and our new cult The Foundation a creepy evil entity to explore. Holding things back is an extended runtime and odd pacing that bogs down the momentum and impact of some of the scarier setups. Overall a decent relaunch to a franchise long gone stale. Wrong Turn is getting a One-Night only theatrical release via Fathom Events. Tickets can be purchased through Fandango - ultimately, it's Worth A Look