History Is Made at Night - Criterion Collection

It's hard to believe a film as highly regarded and beloved as History Is Made at Night has never received a digital release. The last home video edition of this 1937 classic starring Charles Boyer and Jean Arthur came out on VHS way back in 1993. Thankfully, the Criterion Collection has rescued director Frank Borzage's glorious mix of romance, comedy, melodrama, and spectacle before it was too late, meticulously restored it, and is now releasing both Blu-ray and DVD editions to expose this beautifully crafted motion picture to the widest possible audience.

A wildly improbable but utterly engrossing movie that celebrates impetuous and passionate romantic love, History Is Made at Night made history by taking a bunch of oil-and-water cinematic elements and somehow mixing them into a cohesive film. Genre jumbles weren't at all common in 1937, but Borzage and independent producer Walter Wanger colored outside the rigid lines of Hollywood's major studios to concoct a rule-breaking film that captivated contemporary viewers and influenced other directors who would soon copy the formula.

Much like Casablanca a few years later, History Is Made at Night survived and possibly benefitted from a haphazard production that kept everyone involved in a state of perpetual limbo. The sketchy script was still unfinished when shooting began, Borzage and his actors improvised much of the action, and the massive shipwreck climax was added to the picture on a whim midway through filming (thus requiring rewrites and retakes of previous scenes to make the plot make sense). All that chaos, though, reflects the mercurial and impulsive attitudes of the characters and lends the story a compelling urgency more streamlined romances lack. 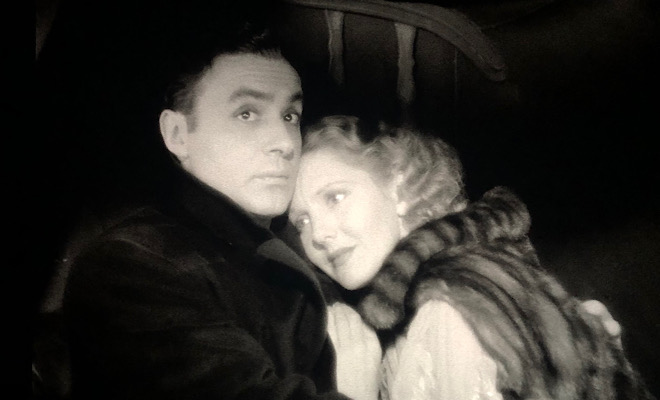 When Irene Vail (Arthur) decides to leave her insanely jealous billionaire husband Bruce (Colin Clive), she's unprepared for his vindictive reaction. The vengeful Bruce, whose paranoid delusions about Irene's infidelity destroyed their marriage, hires his chauffeur to put his wife in a compromising position, so he can accuse her of adultery and nullify the divorce. The nefarious plan, however, goes awry when head waiter Paul Dumond (Boyer) espies the scuffle and rescues Irene. After Paul and Irene flee her Parisian hotel room, a livid Bruce goes ballistic and murders the chauffeur in a rage.

Paul and Irene spend the rest of the night together, dining and dancing after-hours at the restaurant where Paul works. They fall hopelessly in love, but their bliss is short-lived. The next day, Bruce leads Irene to believe Paul killed the chauffeur, but vows not to alert the police if she promises to mend their marriage and accompany him back to America. Desperate to save Paul, Irene agrees. Her sudden departure leaves Paul confused and devastated, but he's determined to win her back. He follows Irene to New York City, but soon discovers finding her in that teeming metropolis is about as easy as finding a needle in a haystack.

The story climaxes aboard a transatlantic cruise ship - owned by Bruce, of course - that's ordered by Bruce (of course) to plow full-steam-ahead through icy waters amid dense fog in an attempt to break the New York-to-England speed record. (Any of this sound remotely like a historical disaster that was immortalized on film by James Cameron in 1997?) Irene and Paul are on board - of course - and at the mercy of fate, Bruce, Mother Nature, and a bunch of watertight compartments in the ship's bowels. 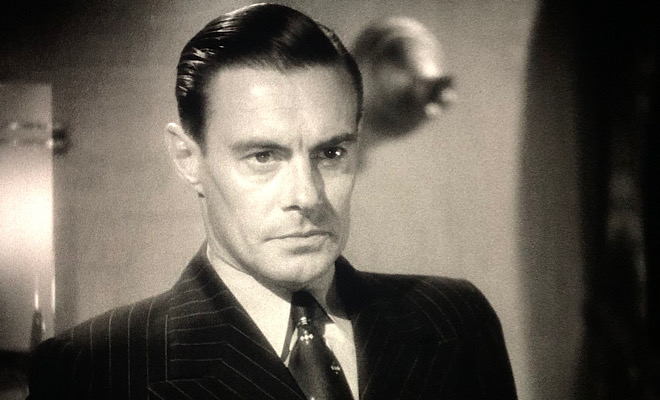 In lesser hands, the preposterous plot would undoubtedly devolve into a melodramatic mess, but Borzage makes sure the narrative never eclipses the potent underlying emotions that fuel the film and keep us committed to the characters. "Love conquers all" may be a tired cliché, but it's Borzage's cinematic credo, and History Is Made at Night is his Exhibit A. Few stories throw more at their protagonists, but love helps Irene and Paul persevere, and Borzage - to his everlasting credit - never cheapens their feelings. Some romances drip with syrup or drown in a torrent of tears, but this one remains honest, adult, and believable throughout.

Like Barbara Stanwyck and Irene Dunne, Arthur is both a gifted comedienne and skilled dramatic actress, and that versatility helps her file an authentic, engaging, often luminous portrayal that ranks among the best of her career. Arthur is not a classic Hollywood beauty, but her expressive eyes, radiant smile, and squeaky, slightly hoarse voice combine with an arch wit and keen intellect to create an irresistible screen persona. Because she honed her talent in screwball comedy, Arthur might not seem like the best match for Boyer at first glance, but she loosens him up and allows the often glowering Frenchman to exhibit the easygoing continental charm that would instantly win him legions of loyal fans. Without their spectacular chemistry, History Is Made at Night would not cast the same seductive spell.

Clive makes a deliciously menacing villain whose ruthlessness knows no bounds. (Who else would be willing to sink their own luxury liner with 3,000 people aboard just to exact revenge on his wife and her lover?) Though best known for wildly shrieking "It's alive! It's alive!" as the monster rises from the dead in Frankenstein, Clive personifies debonair evil here and seems to relish his dastardly role. Sadly, Clive suffered from tuberculosis, exacerbated by chronic alcoholism, and would die at the age of 37 a mere three months after History Is Made at Night premiered.

Borzage, who had already won his two Best Director Oscars (for 7th Heaven and Bad Girl), still had many fine films ahead of him, but History Is Made at Night stands apart because it doesn't fit into any established genre. Kitchen-sink approaches rarely work, but this dreamy concoction is the exception that proves the rule, and its elegance, sincerity, and artistry help it remain just as entertaining today as it surely was 84 years ago. And lucky for us, Criterion has properly preserved this unique movie romance so viewers will be able to enjoy it 84 years from now. 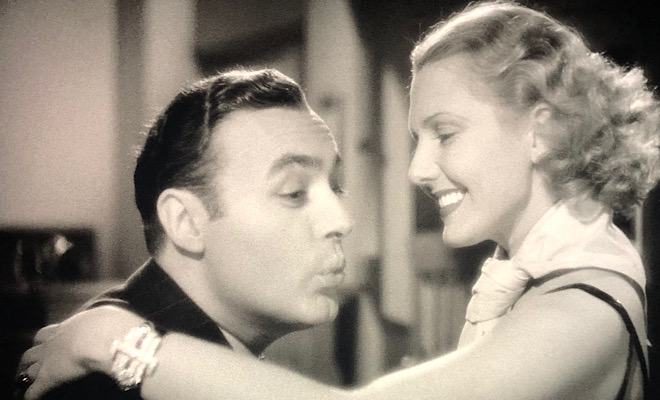 Vital Disc Stats: The Blu-ray
History Is Made at Night arrives on Blu-ray packaged in a standard Criterion case. A 10-page fold-out booklet featuring an essay by author and critic Dan Callahan, a cast and crew listing, and transfer notes is tucked inside the front cover. Video codec is 1080p/AVC MPEG-4 and audio is LPCM mono. Once the disc is inserted into the player, the static menu with music immediately pops up; no previews or promos precede it.

According to the liner notes, "this new 4K digital transfer was created primarily from a 35 mm nitrate duplicate negative preserved by the UCLA Film & Television Archive, with some sections of a 35 mm safety fine-grain also used. All scans were done...in 16-bit 4K resolution." Even without watching the fascinating restoration comparison (see review below), it's easy to appreciate this magnificent restoration and all the work that went into it. Excellent clarity and contrast, beautifully graded grays, and a lovely grain structure that maintains the feel of celluloid distinguish the 1080p/AVC MPEG-4 transfer that also features inky blacks, bright yet stable whites, and above-average shadow delineation. The close-ups of Boyer, Arthur, and Clive may be lush, but they're also sharp, nicely highlighting Boyer's ever-throbbing forehead vein, Arthur's peaches-and-cream complexion, and Clive's angular facial features. All the details and textures in the lavish costumes and sets are well defined and only a few errant marks dot the print. 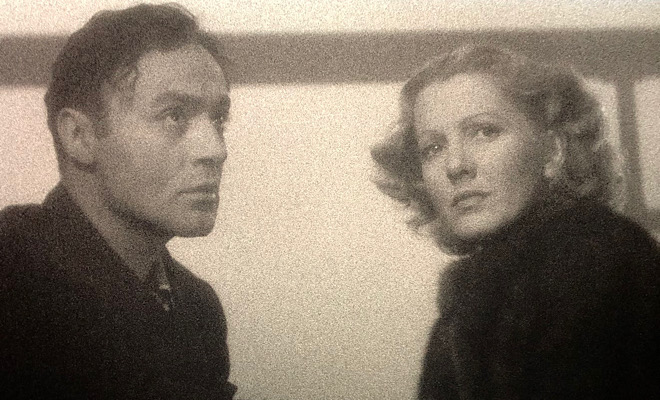 Most of the cruise scenes transpire amid thick fog that adds a gauzy, undulating layer to the image, yet clarity is never compromised, as evidenced by the photo above. The special effects and processed shots are also deftly integrated into the film's fabric to make the disaster look as realistic as possible. A few shots here and there appear a bit ragged, but that's totally understandable when factoring in the film's age and lack of an original camera negative. Considering the elements Criterion was able to secure, this is a truly stunning restoration that will thrill fans of the movie and its stars.

The liner notes state "the original monaural soundtrack was remastered from the nitrate optical soundtrack negative," and the resulting LPCM audio is clear and well-modulated. The track still exhibits a bit of surface noise during quiet stretches, but any pops and crackle have been erased. A wide dynamic scale handles all the highs and lows of Alfred Newman's robust music score, enabling it to fill the room with ease, and all the dialogue, despite the variety of dialects, is easy to comprehend. The crashing of the ship into the iceberg and all the accompanying destruction and pandemonium are crisp and distinct, as are such sonic accents as gunfire, fisticuffs, and the repeated moans of a foghorn. For an 84-year-old film that's been largely neglected for many years, History Is Made at Night sounds quite good, which is welcome news indeed.

A heady mix of romance, light comedy, thrills, and melodrama, History Is Made at Night covers all the bases, then adds a climactic calamity as an exclamation point. Such excess would sink most movies, but director Frank Borzage's impeccable craftsmanship and the captivating performances of Charles Boyer and Jean Arthur keep this wonderfully eclectic film afloat. Criterion brings this Golden Age classic into the 21st century with its first-ever digital release, and the brand new 4K restoration, restored lossless audio, and several absorbing supplements make this long-overdue Blu-ray presentation well worth the wait. Romance fans will swoon over History Is Made at Night, which comes very highly recommended.