Anthony Mann directed many westerns, but one of his first remains one of his best. The Furies helped reshape and modernize the genre and still packs a potent punch today, thanks to a taut, substantive tale laced with Freudian undertones and peppered with noir accents. Barbara Stanwyck, Walter Huston (in his final film role), Wendell Corey, and Judith Anderson all file crackling portrayals in this dynamic drama about greed, power, loyalty, honor, and revenge in 1870s New Mexico. A lovely transfer, robust audio, and absorbing supplements highlight Criterion's classy Blu-ray presentation that comes packaged in a handsome box with a copy of the original novel by Niven Busch. Highly Recommended.

"Freudian westerns" flourished during the 1940s and 1950s, spicing up an often stodgy genre with welcome ambiguity and deviation. Twisted longings, unresolved emotional issues, and hidden vulnerabilities fuel these subversive sagebrush sagas and enhance such archetypal western components as rugged characters, brazen power struggles, and the age-old tussle between good and evil and right and wrong. 1946’s Duel in the Sun was perhaps the first entry in this fascinating sub-genre, and its author, Niven Busch, quickly capitalized on its success with a richly entertaining follow-up, The Furies. With hints of incest and interracial romance, the film embraces taboo themes, but director Anthony Mann masterfully tempers the melodrama so it never eclipses the western flavor, and the result is a riveting portrait of greed, desire, manipulation, and revenge.

Barbara Stanwyck stars as the fiery Vance Jeffords, who dutifully oversees The Furies ranch in 1870s New Mexico during her widowed father's lengthy absences. Vance worships patriarch T.C. Jeffords (Walter Huston) - perhaps a bit too fervently - but the two often clash, and their mutual hot-headed nature fuels many a hot-blooded conflict. He disapproves of her "friendship" with a Mexican squatter (Gilbert Roland) who lays claim to his land, while she can't stomach his betrothal to a fading California socialite (Judith Anderson) who seems determined to usurp her position. Such fierce jealousies unravel the abnormally close ties binding Vance and T.C., and pit the two against each other in a battle royal for supremacy that drives both to the edge. 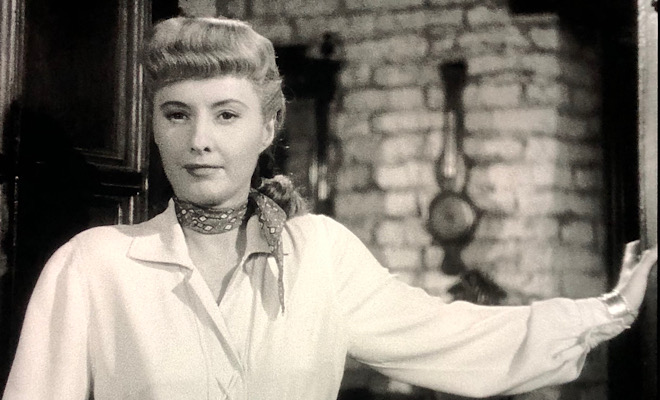 The Furies appeals to a wide audience by adroitly weaving compelling domestic drama and incisive noir elements into its western framework. The taut psychological tension builds from the opening frames, but passions never boil over until a shocking incident midway through the film. Those expecting a brawny, action-packed shoot-'em-up may be frustrated by all the angst, yet no matter how fraught the interpersonal squabbling becomes, Mann makes sure we never forget we're watching a western. He dutifully adheres to the genre's conventions, wisely employs dusty Arizona locations to pump up authenticity, and treats his Mexican characters with surprising sensitivity - a brave choice in a bigoted era. Mann has helmed some of Hollywood's most renowned westerns (Winchester '73 and Bend of the River among them), but his invisible style keeps him largely - and wrongly - under the radar.

The fine cast, however, can't escape notice, and their uniformly excellent work keeps us enthralled. Although Stanwyck had already appeared in such outdoorsy fare as Annie Oakley, Union Pacific, and California, The Furies marked her first true foray into a genre for which she soon would become the female poster girl. Her affection for the western is instantly apparent and she attacks her role with customary grit, displaying enviable equestrian skills and relishing her action sequences.

Stanwyck, though, never allows her physical prowess to eclipse her impressive dramatic abilities. Watching her lock horns with Huston (who would sadly die of a heart attack shortly after completing the film), spar with Anderson (the two underplay to perfection), play a game of romantic oneupmanship with Wendell Corey (their tussling scene brims with fiery passion), and flirt with the macho Gilbert Roland is a treat. 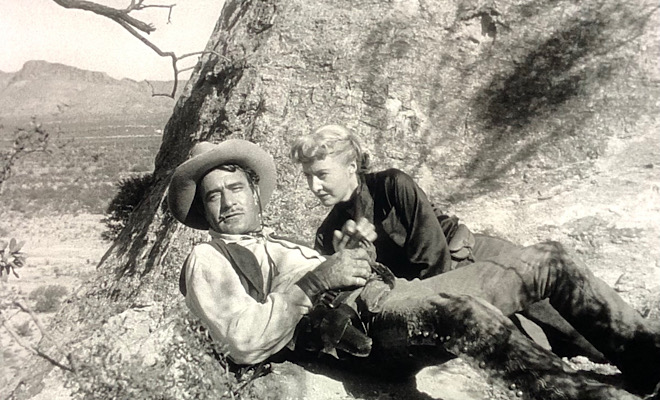 Stanwyck brings her "A" game to every role, but really throws herself into The Furies, crafting a riveting dimensional portrayal. Her exchanges with Huston crackle with intensity and her raw emotion nicely offsets Anderson's airs. At 43, she also cleverly embodies Busch's headstrong heroine, who's a mere 19 in the author's novel. Instead of playing Vance as a kittenish, Scarlett O'Hara-like vixen, Stanwyck chooses instead to use her own maturity to add layers to the character and bite to her love scenes with Roland and Corey (who aids Vance in her plot to topple T.C.). Her advanced age also makes Vance's obsessive relationship with her father even more disturbing.

Huston, fresh from his Oscar-winning performance in The Treasure of the Sierra Madre, takes obvious delight in the irascible T.C., chewing the scenery without descending into caricature. The impeccable Anderson purrs like a tigress, and Roland's soulful turn as a noble, proud Mexican squatter and Vance's dearest friend, deeply resonates. There's also a wonderful bit from Blanche Yurka (the evil Madame Defarge in the original A Tale of Two Cities), who wordlessly skulks around during much of the film a la Gale Sondergaard in The Letter, but makes a big statement at the denouement. 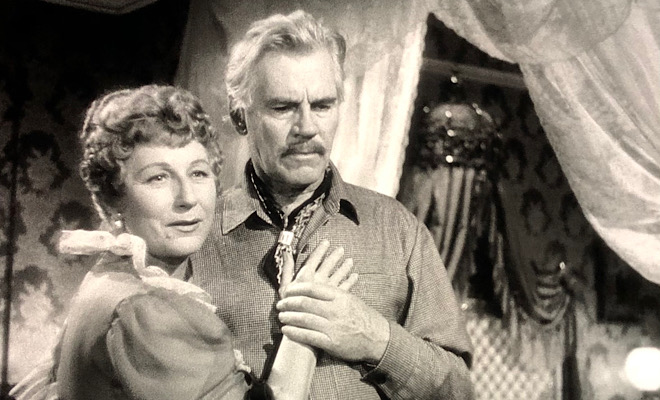 With its bold themes, masterful acting, and expert direction, The Furies colors outside the lines of typical, traditional westerns, and that's exactly what makes it fascinating, memorable, and timeless. Stanwyck and Huston ignite plenty of sparks, and their terrific chemistry propels this involving, textured, and impeccably crafted film.

The Furies arrives on Blu-ray in practically the same packaging as the 2008 DVD. A rustic cardboard box holds the matching cardboard case that houses the disc and a 40-page booklet that contains an essay by critic and scholar Robin Wood, a 1957 interview with director Anthony Mann, several scene shots, a cast and crew listing, and transfer notes. Also included is a soft bound edition of the original 299-page novel by Niven Busch with a lovely textured cover that matches the rest of the package's design. (When this release was first announced, I was concerned Criterion might omit Busch's book in favor of a more streamlined - and cheaper - Blu-ray edition, but thankfully the company chose to replicate its DVD presentation. The only difference is the DVD case contains a pouch that houses the booklet; in the Blu-ray edition, the booklet is simply a loose insert inside the case.) Video codec is 1080p/AVC MPEG-4 and audio is LPCM mono. Once the disc is inserted into the player, the static menu with music immediately pops up; no previews or promos precede it.

The 1080p/AVC MPEG-4 transfer was created from a 35 mm composite fine-grain master positive. Though some additional clean-up has been performed, the source looks strikingly similar to the one used for the 2008 DVD. Grain levels fluctuate somewhat, but the overall appearance is wonderfully film-like and the transfer faithfully renders Victor Milner's gorgeous Oscar-nominated cinematography. Both the ornate interiors of The Furies ranch and dusty, rugged Arizona exteriors look beautifully balanced and flaunt plenty of fine detail.

Blacks are stable and rich, whites are crisp and resist blooming, and a wide grayscale provides depth and texture. The day-for-night scenes are especially impressive, with excellent contrast, shadow delineation, and several well-defined silhouettes producing some arresting images. Sharp close-ups flatter the stars yet still highlight such western elements as sweat and grime, and though a bit of image instability occasionally occurs and a few errant nicks and marks remain, such niggling imperfections only momentarily distract from this impressive and immersive presentation that perfectly complements the taut, involving story.

The LPCM mono audio was remastered from a 35 mm optical track, and the result is a fine rendering that slightly improves upon the 2008 DVD. A wide dynamic scale handles all of the dramatic highs and weighty lows of Franz Waxman's rousing music score without any distortion, and all the spirited dialogue is well prioritized, clear, and comprehendible. Some potent bass accents also enliven track, with the sounds of boulders bouncing down cliffs, gunshots, and explosions possessing plenty of pop. Any lingering pops and crackles have been erased, but the some of the hiss that was evident on the DVD still crops up from time to time.

All the extras from the 2008 DVD - with the exception of the stills gallery - have been ported over to this Blu-ray release, along with a new analysis featuring film historian Imogen Sara Smith.

Though The Furies may not stand as Anthony Mann's most famous western, it surely ranks among the director's best work, and its muscular storytelling, Freudian undertones, and the mesmerizing portrayals of Barbara Stanwyck, Walter Huston, Wendell Corey, and Judith Anderson keep it vital and gripping more than seven decades after its initial release. A lovely transfer, robust audio, and plenty of absorbing supplements distinguish Criterion's stellar Blu-ray presentation of this richly textured, beautifully mounted movie. Highly Recommended.