It may be 85 years old, but the 1935 adaptation of A Tale of Two Cities is a far, far better film version of Charles Dickens' immortal novel than any other version. Memorable performances by Ronald Colman and his supporting cast, a literate script, and Jack Conway's spirited direction faithfully honor this richly entertaining story of love, honor, revenge, and sacrifice set during the French Revolution. A remastered transfer and lossless audio showcase all the drama, spectacle, and priceless Dickensian charm of this motion picture classic, which comes highly recommended.

Before David O. Selznick severed ties with MGM to form his own company (and mount the mammoth Gone with the Wind), he produced two ambitious adaptations of novels by his favorite boyhood author, Charles Dickens. Both David Copperfield and A Tale of Two Cities not only faithfully honor their source material and beautifully recreate their respective period atmospheres, they also capture the inimitable - and often elusive - Dickensian tone and remain marvels of mid-1930s moviemaking. Tackling Dickens is always a daunting task, so to think Selznick brought two of the author's most famous works to the screen within an 18-month span boggles the mind.

A Tale of Two Cities doesn't quite live up to David Copperfield (which hopefully will receive its own Blu-ray release soon), but stands as an impressive, stirring film and arguably the best telling of Dickens' timeless tale of romance, revenge, and sacrifice set against the backdrop of the French Revolution. In true Dickens fashion, eccentric characters, crazy coincidences, and stunning revelations pepper the dense narrative, but the added elements of social unrest and a massive peasant uprising that would topple a monarchy and change the course of history lend the story more relevance and meaning. 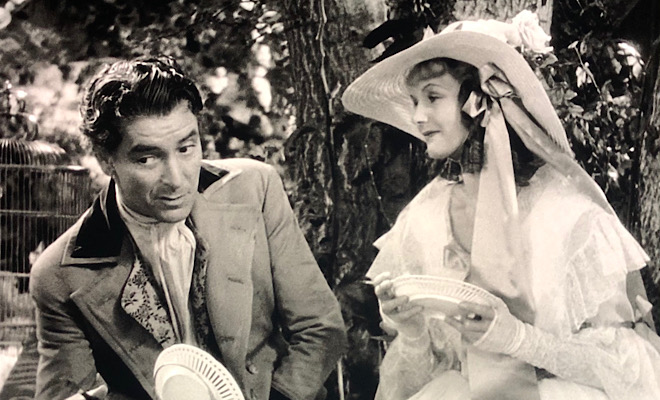 When Lucie Manette (Elizabeth Allan) learns her presumed dead father, Dr. Alexandre Manette (Henry B. Walthall), has escaped from the Bastille after an 18-year incarceration, she rushes to the modest Parisian wine shop where he's hiding. Ernest and Therese Defarge (Mitchell Lewis and Blanche Yurka) are not only the store's proprietors, but also passionate revolutionaries who hope to one day lead a charge against the cruel and ignoble aristocracy that has kept them and their working-class compatriots oppressed and impoverished for centuries.

On their way back to London, Lucie and her father meet the dashing Charles Darnay (Donald Woods), who has just renounced his wealthy French family and heartless, sneering uncle, the Marquis de St. Evremonde (Basil Rathbone), who proudly brandishes the French aristocracy's most despicable qualities and just happens to be the man responsible for sending Lucie's father to prison. To punish Charles for his betrayal, the Marquis trumps up a treason charge against him, but Sydney Carton (Ronald Colman), a jaded British barrister who bears an uncanny physical resemblance to Charles, exposes the scheme and exonerates him.

Both men fall hopelessly in love with Lucie, but she chooses the upstanding, idealistic Charles over the rumpled, cynical Sydney, who drinks too much too often and struggles to find any meaning in life. Sydney remains a trusted family friend, but his unrequited affection for Lucie, who knows nothing of Charles' shameful heritage, eats away at his soul. 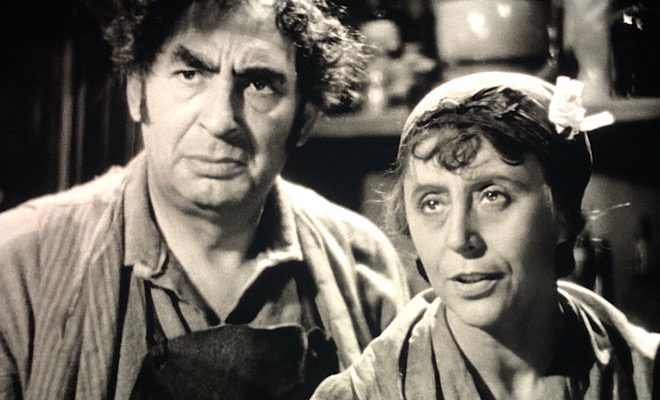 Once the French Revolution begins, Charles, Lucie, Sydney, Dr. Manette, and Lucie's fiercely loyal nursemaid Miss Pross (Edna May Oliver) all become ensnared in a deadly web spun by the Defarges, whose thirst for vengeance cannot be quenched. Trials, tribulations, more revelations, and injustice ensue, and a date with the guillotine seems a certainty for one or more of the brood unless Sydney can find a way to thwart the corrupt tribunal and rescue those he loves.

Most Dickens plots rely on serendipity and wild twists that strain credulity to resolve complications. A Tale of Two Cities is no exception, but the material's potent themes and palpable emotions overshadow such narrative deficiencies. Director Jack Conway deftly showcases the story's memorable characters, milks moments of intimacy and introspection, embraces humor, and effectively depicts the tension and fear gripping Paris during the Reign of Terror. He also resists any temptation to over-sentimentalize the tear-jerking "It's a far, far better thing I do than I have ever done" denouement. With admirable restraint, Conway lets Dickens' simple, lyrical words speak for themselves, and the result is a memorable and resonant coda to a well-crafted film.

The spectacle is impressive, too. The storming of the Bastille, which features hundreds - if not thousands - of extras descending on the massive fortress from various angles, was designed and choreographed by future producer Val Lewton and future director Jacques Tourneur, who would later collaborate on such classic 1940s horror fare as Cat People and I Walked with a Zombie. (Tourneur also would direct the iconic film noir Out of the Past, among many other notable features.) Today, CGI certainly would be used to create part of the rabid mob, but knowing each and every rebel on screen is an actual person enhances the scene's impact and makes the chaos feel authentic. Here's a taste...

Colman had long coveted the role of Carton and even agreed to shave off his signature mustache for the sake of historical accuracy (something he did only one other time in his 40-year career). He refused, however, to also play the part of Carton's doppelgänger Charles Darnay. (Though previous screen adaptations of A Tale of Two Cities employed the same actor for both roles, Colman felt such a gimmick betrayed the original novel, which never insinuates the men could be mistaken for twins.) Colman's understated, beautifully nuanced portrayal, which ranks among his finest, stands the test of time and makes it impossible to imagine anyone else in the role...as evidenced by the following scene:

The fiery Yurka embodies the evil, glowering Madame Defarge, who furiously knits throughout the film, and Oliver, who memorably played Aunt Betsey in David Copperfield, delights as the prim Miss Pross. Their catfight showdown at the end of the film may be unintentionally amusing (their stunt doubles are obviously men in drag), but it's a rousing, crowd-pleasing confrontation. The two tough broads give the scene their all and pave the way for countless other feline fights in Hollywood's future. 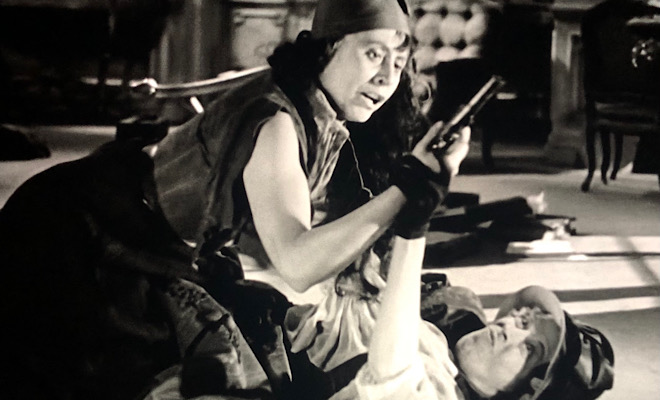 Allan, who also appeared in David Copperfield, makes a lovely, warm Lucie, but Woods is, well, wooden as the strapping Darnay. Both sadly lack the magnetism that oozes from the rest of the standout supporting cast led by a deliciously nasty Rathbone as the foppish Marquis. Reginald Owen overplays to perfection as Carton's bombastic law colleague and Isabel Jewell (who a few years later would later play "white trash" Emmy Slattery in Gone with the Wind) tugs the heartstrings as a doomed seamstress who befriends Sydney as they await the inevitable.

As I watched A Tale of Two Cities this time around, I remarked to my wife that Madame Defarge's ghoulish gal pal, The Vengeance, played by acclaimed stage actress Lucille La Verne, looked an awful lot like the animated Old Hag in Walt Disney's Snow White and the Seven Dwarfs. Well, it turns out Disney was so taken with La Verne's scraggly, toothless look and wild-eyed, sinister portrayal in A Tale of Two Cities, he not only modeled the Old Hag's frightening appearance after her, he also hired La Verne to voice both the Evil Queen and Old Hag in his groundbreaking animated classic, which would prove to be her final film.

Selznick left MGM before the premiere of A Tale of Two Cities, and rued that he couldn't put his patented finishing touches on the movie. A few rough edges remain, but this superior production stands as a lasting testament to one of Dickens' most popular novels. Though Selznick would produce far, far better movies in the years to come, this version of A Tale of Two Cities remains far, far better than any other adaptation before or since. 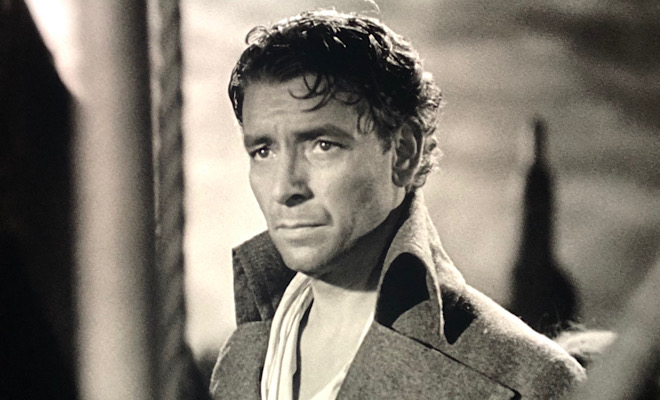 Vital Disc Stats: The Blu-ray
The 1935 version of A Tale of Two Cities arrives on Blu-ray packaged in a standard case. Video codec is 1080p/AVC MPEG-4 and audio is DTS-HD Master Audio 2.0 mono. Once the disc is inserted into the player, the static menu without music immediately pops up; no previews or promos precede it.

A brand new HD master yields a very pleasing 1080p/AVC MPEG-4 transfer that's distinguished by excellent clarity and contrast and beautifully graded grays. Like most 1930s films, A Tale of Two Cities exhibits plenty of grain, but it's nicely resolved and lends the image a lovely celluloid feel. The levels occasionally fluctuate, but even during the heavier stretches, the picture always looks natural and well balanced.

Blacks are rich (the gloppy mud in the opening scene is especially vivid) and superior shadow delineation heightens the impact of dingy interiors and nocturnal scenes. The impressive definition during the rebellion sequences enhances their scope and brings the teeming, angry crowds to life. Sharp close-ups, whether of Colman and other principals or isolated extras, nicely render fine facial features and blemishes, and only a couple of stray specks dot the pristine source material. Whites can run a tad hot at times, but that's the only (very minor) quibble I have with this stellar presentation that makes this 85-year-old classic look better than ever.

The DTS-HD Master Audio 2.0 mono track is crisp and amazingly clean, especially when considering the film's advanced age. The well-modulated sound benefits from a wide dynamic scale that allows Herbert Stothart's romantic and dramatic music score plenty of breathing room while keeping distortion at bay. Subtle atmospherics like chirping birds and rumbling thunder nicely shade the action, while such sonic accents as barking dogs, galloping horse hooves, gun and cannon fire, and the crash of the guillotine add some welcome oomph. The murmurs and shouts of the boisterous crowd noise are robust but not cacophonous, and all the dialogue is well prioritized and easy to comprehend. Any pops and crackle have been erased, and only a few instances of faint hiss could be detected.

All the supplements from the 2006 DVD have been ported over to this Blu-ray release.

There have been many fine adaptations of Charles Dickens' novels, but the 1935 version of A Tale of Two Cities stands as one of the best. MGM's stirring, impressive production brings the turbulence of the French Revolution and all of Dickens' colorful characters to brilliant life as it chronicles the impact of the peasant rebellion on a humble family. A new HD master and excellent lossless audio revitalize this classic film, which still dazzles the senses and tugs the heartstrings 85 years after its initial release. Highly Recommended.