The first of the horror films producer Val Lewton made for RKO Pictures redefined the genre by leaving its most frightening terrors to its audience’s imagination. Simone Simon stars as a Serbian émigré in Manhattan who believes that, because of an ancient curse, any physical intimacy with the man she loves (Kent Smith) will turn her into a feline predator. Lewton, a consummate producer-auteur who oversaw every aspect of his projects, found an ideal director in Jacques Tourneur, a chiaroscuro stylist adept at keeping viewers off-kilter with startling compositions and psychological innuendo. Together, they eschewed the canned effects of earlier monster movies in favor of shocking with subtle shadows and creative audio cues. One of the studio’s most successful movies of the 1940s, Cat People raised the creature feature to new heights of sophistication and mystery.

As the music of birds chirping in trees blends with the crowd noise of zoo patrons, the beautiful fashion designer Irena (a superbly bridled Simone Simon) throws a crumpled sketch of a caged black panther at a trash can and misses. This catches the attention of the dashing Oliver Reed (an excellent Kent Smith), who wastes no time in making his gentlemanly intentions known. Although, reminding Irena of posted signs about littering as some kind of pick-up line definitely speaks to this being of a vastly different period. Nevertheless, his debonair charms work because he's soon invited inside Irena's apartment for a cup of late night tea, and the two immediately hit it off — swapping their "I love yous" by their second date and tying the knot soon after. The story moves fairly quick, even when Irena delivers the necessary exposition about her fear of descending from a race of cat people in Serbia, but the two actors provide enough chemistry to make their romance believable. They are like children letting their emotions rule their better judgment and guide their decisions, which interestingly plays a big part to the film's central theme.

These opening moments of Jacques Tourneur's landmark horror classic 'Cat People' are suggestive of a completely different movie — something along the lines of a romantic comedy. Working from a script by DeWitt Bodeen, writer of the equally excellent 'The Seventh Victim,' Tourneur introduces his main protagonists in quintessential "meet-cute" fashion. And for a good part of the film, the ingredients of the formula are deliberately on full display, even throwing in a love-triangle device with Oliver's best friend and co-worker Alice (Jane Randolph). But before complicating matters, the filmmakers ease viewers into a familiar rhythm that has them relaxing their guard. Of course, the plot is sprinkled with a few hints of something stranger and perhaps more sinister stealthily prowling beneath the fantasy romance. A cat puffs up with its fur upright and angrily hisses at her, and a pet shop bursts into a deafening outcry. However, it's not until their wedding night when a creepy stranger blesses the couple and Irena says she's not ready to consummate their union that we start to suspect their fairy tale marriage is built on some dark malevolent mystery. 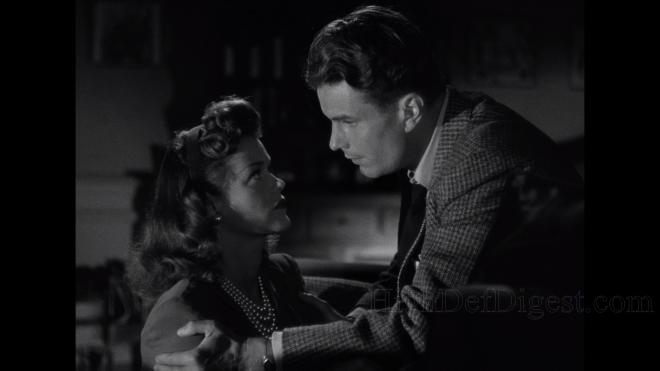 The beauty of this influential film is the way Tourneur toys with our expectations and sense of familiarity. Like a cat stalking with its prey, the French-born filmmaker suckers his audience into a comfortable, leisure state of mind through plot, but visually, there are dangerous creatures ready to pounce lurking in the pitch-black shadows. With beautiful, sumptuously atmospheric camerawork by Nicholas Musuraca, the cinematography grows darker and more ominous after the marriage while the sound of a panther's ferocious roar echoes increasingly louder. What seemed like standard rom-com material adapts and evolves — or rather, devolves — into a creature feature questioning Irena's sanity and Oliver starting to fear for his life. Walking home alone late at night, Alice feels as though she were being hunted by a deadly creature. And all of this, from the character's uncertainty of their surroundings to our own understanding of what's happening, is in the imagination of the viewer, which can conjure even more terrifying scenarios than anything on the screen. The presence of a monster about to attack is only suggested. The audience makes up the rest.

It also leaves us to wonder whether Irena is truly a were-cat or a seriously troubled young woman, though the case could be made that Tourneur leaves little room for doubt in a couple scenes. For contemporary moviegoers, 'Cat People' may not be a satisfying horror film or see its significance to the genre — John Carpenter famously quipped that it seems overrated by today's standards and a friend who saw it with me simply thought it a strange movie. But its appreciation and influence doesn't come from how effectively it can scare an audience. Rather, the film was ahead of its time. This was a period when creature features prominently featured the monster and the focus was on thrilling audiences with spectacular special effects. Tourneur and his production placed emphasis on a foreboding atmosphere where the invisible monster serves as a scary, lurking presence. And the sound design helped in establishing this dark, menacing mood. The clack of a woman's shoes slowly changes into the clatter of cat's nails on concrete, the roar of a panther in a gym's swimming pool echoes with spine-tingling realism, and most famous of all, the cat's loud hissing is actually the sound of a bus's air brakes.

That last bit is today known as the "Lewton Bus," named after the film's producer because he's credited for inventing it. It's now a popular genre technique — building a scene's tension and suspense to its most explosive and scaring audiences out their seats ("the jump scare") with an unexpectedly loud noise — which is overused and usually not done well. Nevertheless, Tourneur's 'Cat People' unwittingly left its inventive mark in horror cinema, and we see its undeniable influence in nearly all of today's horror features.

This Blu-ray edition of Jacques Tourneur's 'Cat People' comes courtesy of The Criterion Collection (spine #833) on a Region A locked, BD50 disc housed inside the distributor's standard clear keepcase. Accompanying the disc is a foldout, poster-size pamphlet with a lovely sketch of a black panther on one side and an insightful essay entitled "Darkness Betrayed" by author Geoffrey O'Brien on the other. There are no trailers before being greeted by the standard menu screen with static photo and music playing background.

Taken from a 2K resolution scan of a 35mm fine-grain safety master, Jacques Tourneur's 'Cat People' claws its way to Blu-ray with a gorgeous AVC-encoded transfer.

The movie has never looked this beautiful on home video before, displaying spot-on, terrifically balanced contrast with crisp, brilliant whites in every scene. Brightness levels are much deeper than previous versions of the film, delivering true and accurate blacks. Inky rich shadows are intentionally overwhelming to create a tense, ominous feel in the story, but background info is not sacrificed in the least.

Presented in its original 1.37:1 aspect ratio, fine lines and objects are not only visible from start to finish, but they're actually remarkably detailed throughout. Viewers can make out the individual threads and stitching in the clothing, and the men's suits show wrinkles and creases. What I find most impressive is being able to see the fabric fibres in the women's dresses, and some of the furniture shows tiny scuffs and marks from normal wear and tear. Facial complexions are highly revealing and lifelike, especially in close-ups. Of course, a few scenes are understandably softer than others with mild discoloration, which is due to the condition of the source. And it's also worth mentioning an instance of minimal telecine judder just after the one hour mark when Dr. Louis Judd confronts Irena in her apartment.

But aside from that, the high-def image also shows a thin veneer of grain, providing the presentation with a lovely cinematic quality that horror fans and cinephiles will love.

The horror classic meows and purrs Blu-ray to submission with a beautiful uncompressed PCM monaural soundtrack made from the original 35mm negative.

Despite being entirely restricted to the center channel, imaging is surprisingly broad with a superb acoustical presence and fidelity and a sharply defined mid-range. For a film that utilizes a deliberate sound design to generate a haunting and foreboding atmosphere, the highs are splendidly discrete with excellent movement. When Alice hurries to catch a bus, Irena's shoes clank loudly, and the roar of the black panther in the swimming pool echoes with deafening menace. Other minor background details, like the squealing noises of animals and the birds at the zoo, can be distinctly heard throughout, and individual instruments in Roy Webb's score are crystal clear with a healthy low-end that provides weight.

With crystalline and well-prioritized vocals, the audio presentation is first-rate and brilliant.

Jacques Tourneur's landmark horror classic 'Cat People' is a beautiful and remarkable motion picture with an original but also uniquely bizarre plot about were-cats. The beauty and lasting legacy of the production is the influential photography of Nicholas Musuraca and the memorable camerawork of legendary filmmaker Jacques Tourneur, using the audience's imagination to produce the scares. The Blu-ray from The Criterion Collection arrives with a gorgeous, near-reference picture quality and an excellent audio presentation. Along with a decently nice assortment of supplements, the overall package comes recommended for cult enthusiasts and horror aficionados who would be proud to display it in their libraries.

Sale Price 27.49
List Price 39.95
Buy Now
3rd Party 21.95
In Stock.
See what people are saying about this story or others
See Comments in Forum
Previous Next
Pre-Orders
Tomorrow's latest releases