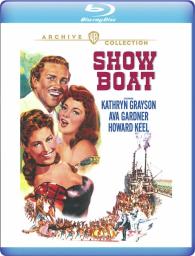 From novel (by Edna Ferber) to Broadway smash (by Jerome Kern and Oscar Hammerstein II) to three film versions (1929, 1936, 1951) to stage revivals. Like Ol' Man River, Show Boat just keeps rollin' along. Produced by Arthur Freed and directed by George Sidney, this 1951 version of the saga of riverboat lives and loves has glorious stars (Kathryn Grayson, Ava Gardner, Howard Keel, Marge and Gower Champion) in Technicolor® radiance, a made-from-scratch 170-foot paddle wheeler, timeless songs and an equally timeless outcry against racial bigotry. "This was music that would outlast Kern's day and mine," Ferber said in recalling her first reaction to hearing "Ol' Man River." She was right as rain.