The 1936 edition of Show Boat may not be the splashiest version of the beloved, groundbreaking musical, but it's undeniably the best. Director James Whale infuses the time-honored Edna Ferber tale with gusto, warmth, and artistry, and the classic Jerome Kern-Oscar Hammerstein II score still stirs the senses. Irene Dunne and Allan Jones shine in the leading roles, but Helen Morgan and Paul Robeson steal the show...and our hearts. Show Boat is that rare musical mix of spectacle and substance, and Criterion honors its lofty reputation with a lovely new video transfer, excellent lossless audio, and a marvelous array of absorbing extras. Highly Recommended.

When it premiered on Broadway in 1927, Show Boat instantly changed the musical landscape. Never before had a mainstream musical so seamlessly blended narrative and song, explored controversial social issues, and integrated African-American characters and culture into its plot and score. Theatergoers flocked to Jerome Kern and Oscar Hammerstein II's ambitious adaptation of Edna Ferber's popular novel, and over the ensuing 25 years, Hollywood would produce three very different versions of the classic tale of love, loss, and intolerance on the majestic Mississippi.

The glossy, insipid 1951 MGM incarnation starring Kathryn Grayson and Howard Keel may be the best known cinematic treatment of Show Boat, but the definitive version is without a doubt the far-less-seen 1936 Universal release directed by James Whale. Packed with emotion, humor, and period flavor, beautifully performed by a stellar cast, and filmed with artistry, gusto, and grace, the 1936 Show Boat comes closest to capturing the essence of Ferber's story and the atmosphere and timbre of the times. 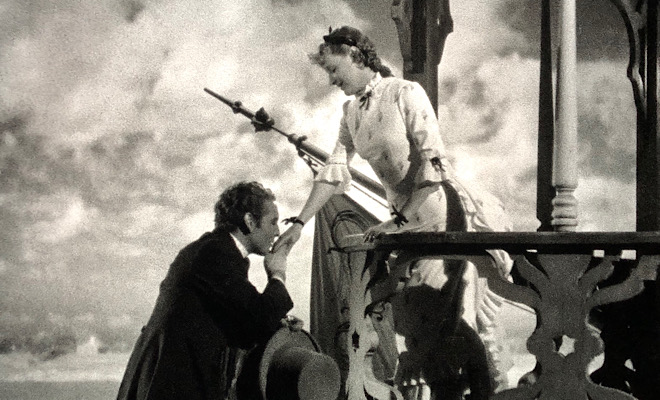 Ferber's romantic showbiz yarn covers a 40-year timespan from the mid-1880s to mid-1920s as it nostalgically salutes the venerable floating theaters that drifted up and down the Mississippi River bringing welcome diversion to a racially mixed audience desperate for relief from life's drudgeries. It also chronicles the life and career of Magnolia Hawks (Irene Dunne), the naive, sheltered daughter of Cap'n Andy (Charles Winninger) and Parthy Ann Hawks (Helen Westley), who run the famed Cotton Blossom show boat and weather its myriad ups and downs.

Woven into this narrative fabric is a rich depiction of black culture and a warm, touching portrait of the devoted relationship between Queenie (Hattie McDaniel), the boat's cook, and her laborer husband Joe (Paul Robeson). The couple bickers and spars like most marrieds, but their deep, abiding love contrasts starkly with the turbulent, tenuous unions of their white counterparts. Though the film does occasionally foster unfortunate African-American stereotypes and caricatures, and includes a minstrel number (which was not uncommon in Golden Age Hollywood musicals), Show Boat lavishes far more screen time on its black characters and shines a more honest, balanced, and reverent light on them than most movies of the period. And for that director James Whale deserves commendation. 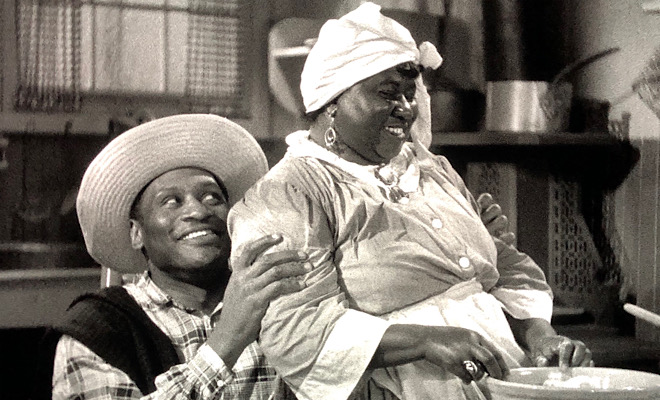 He also deserves kudos for his vision and artistry. Before Show Boat, Whale specialized in horror movies, helming such acclaimed features as the original Frankenstein, The Old Dark House, The Invisible Man, and The Bride of Frankenstein. Directing a musical might seem like an odd leap, but Whale brings to Show Boat the same meticulous attention to detail, technical innovation, sense of humor, and rhythmic flow that distinguishes his thrillers. He also thrusts us into a vivid, immersive, and infectious atmosphere that beautifully blends realism and artifice, and seamlessly integrates the classic Kern-Hammerstein songs.

And oh, what songs they are! From "Make Believe" and "Can't Help Lovin' Dat Man" to "You Are Love," "Bill," and, of course, the granddaddy of them all, "Ol' Man River," the familiar melodies and powerful lyrics not only stir the soul, they also define character, propel the plot, and enhance the film's mood. And the fact that several of these renditions are performed by the actors who introduced them on stage make them even more special.

Man, are we lucky Paul Robeson recreated his role, so his staggeringly beautiful, unforgettable performance of "Ol' Man River" could be forever preserved on film. Robeson's Herculean presence, million-dollar smile, and booming basso electrify the screen, and his captivating portrayal of the shiftless yet beguiling Joe spoils the role for anyone else. He also creates terrific chemistry with the always delightful McDaniel, who makes the most of the second-best role of her career.

Compared to Robeson's strapping Joe, Helen Morgan's Julie resembles a delicate sparrow whose wings are cruelly clipped by an intolerant, ignorant, and vindictive society. Morgan's work is also definitive...and mesmerizing. She tugs the heartstrings with her sincere interpretation of "Can't Help Lovin' Dat Man," but rips our heart out with her signature rendition of the iconic torch song "Bill." Sadly, much like her alter ego character, alcoholism would send Morgan to an early grave. She died just five years after Show Boat was released at the tender age of 41. 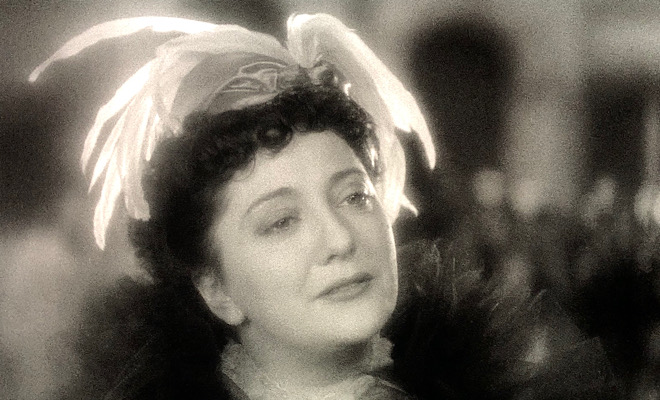 Dunne is clearly too old to portray the teenage Magnolia, but somehow she pulls it off, projecting a winsome innocence that's both attractive and heartwarming. Though best known for tear-jerking women's pictures and daffy screwball comedies, Dunne could also sing up a storm. (She graduated with high honors from a music college, auditioned for the Metropolitan Opera, and toured in a number of stage musicals, including Show Boat, before coming to Hollywood in 1930.) Her soaring soprano more than meets the challenges of the demanding score, and her duets with Jones are often thrilling.

All the performances ring true (I also love Helen Westley's broad interpretation of the dour, domineering Parthy Ann), but no discussion of Show Boat can be complete without lauding the brilliant work of Charles Winninger, who created the role of Cap'n Andy on Broadway and brings boundless energy, earnestness, and remarkable agility to his screen portrayal. If Robeson is the movie's soul, Winninger is indisputably its heart, and like glue, his robust, endlessly entertaining performance - which criminally did not garner a Best Supporting Actor Oscar nomination - holds the story together.

Show Boat is an American institution, and though the 1936 film version isn't perfect (like most screen adaptations of Broadway shows, it omits some songs and adds new ones), it comes closest to capturing the social climate of the times and reflecting the cultural importance of show boats to the rural residents they served. Whale's endearing and enduring film also includes several definitive performances that heighten the material's impact and thrill the senses. MGM usually corners the market on musicals, but not here. Universal's 1936 Show Boat is by far the best version, and thanks to this impressive Criterion edition, it will "just keep rolling along" for all time. 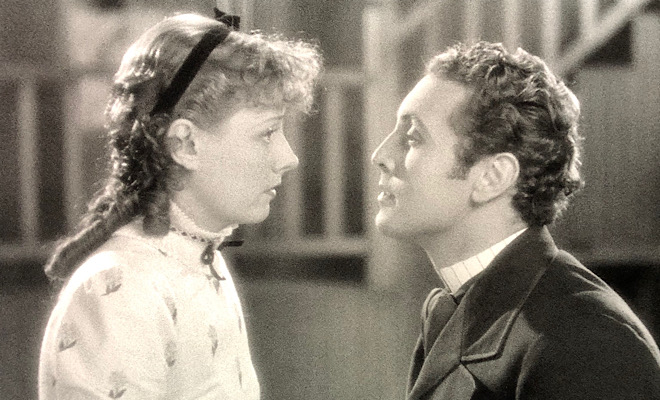 The 1936 version of Show Boat arrives on Blu-ray packaged in a standard Criterion case. A 24-page booklet printed on glossy paper and featuring an essay by jazz and film historian Gary Giddins, several black-and-white scene shots, a cast and crew listing, and transfer notes is tucked inside the front cover. Video codec is 1080p/AVC MPEG-4 and audio is LPCM mono. Once the disc is inserted into the player, the static menu with music immediately pops up; no previews or promos precede it.

Show Boat is a beautiful, artistic motion picture, and Criterion's exceptional 1080p/AVC MPEG-4 transfer brings it to life like never before. The liner notes state, "This new digital transfer was created in 4K resolution...from a 35 mm safety fine-grain made from the original camera negative." Grain is evident, but only on a couple of fleeting occasions does it become uncomfortably thick. The picture looks incredibly film-like, and the absence of any nicks, marks, scratches, or other print damage allows us to become fully immersed in the story. Excellent clarity, contrast, and grayscale variance enhance depth and detail levels, while rich blacks, bright whites, and good shadow delineation provide superior image contours. Close-ups are sharp and striking, especially those of Robeson during his stirring rendition of "Ol' Man River," and Dunne, Jones, Morgan, and McDaniel also look stunning in their tight shots. Once again, Criterion produces a top-notch transfer of a vintage movie that will thrill Golden Age aficionados.

According to the liner notes, "the original monaural soundtrack was remastered from the 35 mm fine-grain," and it produces clear, crisp, well-modulated sound. Fidelity and tonal depth are surprisingly good considering the track's advanced age, and a wide dynamic scale embraces the soaring highs of Irene Dunne's soprano and resonant lows of Paul Robeson's bass - as well as all the orchestrations - without a hint of distortion. Ambient effects like rain and crowd noise are distinct, but never overwhelm the action, and all the dialogue is easy to comprehend. Any hiss, pops, or crackle have been erased, so we can all enjoy the classic Jerome Kern score without any distractions or impediments. While it's too bad the track's vintage nature precludes a multi-channel presentation, Criterion has fashioned the best possible audio rendering, which greatly enhances this milestone musical.

A marvelous spate of supplements enhance this Criterion release.