Hong Kong Chopsocky cinema gets an extra dimension of action and adventure with the 70s 3-D classic Dynasty (no relation to the 80s television series). Directed by Mei-Chang and starring Bobby Ming and Tao-Liang Tan, a simple tale of revenge goes big on bloody action and spectacle with this over-the-top adventure. 3-D Film Archive has done another masterclass restoration on a piece that’s notoriously problematic fixing numerous misalignment issues for a 3-D presentation that’s probably better than the original theatrical run. Not perfect, but pretty damn great considering. Add in a glorious dynamic restored quadrophonic sound mix, both polarized and anaglyph 3-D with some great extras, this is another winning release. Highly Recommended.

The Emperor’s son Sao Chin Tan (Tao-Liang Tan) has been wrongfully accused of high treason against the throne. Now with the elite guard after him, the young prince is in the fight of his life and will have to use his extensive training to survive, clear his name, and exact his revenge. 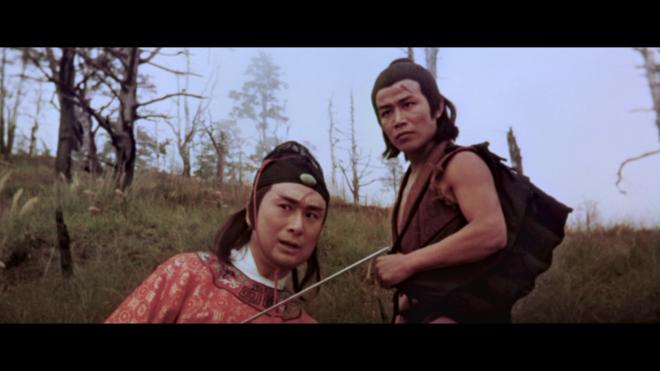 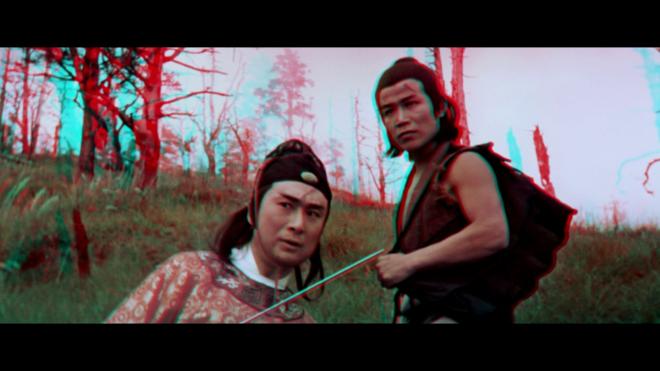 My first time watching Dynasty - again not the classic 80s television show - was watching a bootleg DVD of sadly very questionable quality. While presented flat, you could feel the film going for that “three-dimensional” vibe with vigor as every action sequence would feature multiple objects and limbs thrusting out of the screen. After a while, it starts to get a bit silly with jumps in time, space, and plot at random. With this viewing, I felt like I was finally able to fully enjoy the show.

Watching this film in 3-D, everything works much better. The photography has a purpose to it now in a way that flat 2-D just doesn’t offer. It doesn’t help improve the story any, but it helps bring the action home when there's a reason for a hand or sword to poke out of the screen and hold for a few moments. At its core Dynasty is a pretty damn familiar story of revenge that’s been told time and again - especially in the martial arts sector. It’s simple, easy to tell, and doesn’t bog down the action scenes with dialog or plot. It just barrels forward at a blistering pace without a lot of character setup or arc. It just hits the gas and goes for it. And Dynasty delivers the action aplenty. You hardly get a five-minute break before fists and feet start flying on (and out of) the screen.

The appeal and purpose of Dynasty is the 3-D photography and martial arts showcase. While a lot of it works and lends itself to the action and spectacle, it’s also a technological failure in many ways. In addition to the age and condition of the elements, Dynasty’s 3-D photography was problematic. The Super-Touch 3-D system had a number of issues, all well detailed in a featurette in this disc's bonus features package. Problems ranged from loose optics, dirty lenses, misalignments, and last but certainly not least - the filmmakers didn’t properly measure their focus points so parallax is a frequent companion of the action.

Foreground objects and the numerous poking shots feature the most serious parallax issues that just aren’t fixable. 3-D FIlm Archive managed to fix the alignment issues and print damage, but a number of cooked-in issues are the way they are. There are moments where the three-dimensional depth is absolutely stunning and we get some intense martial arts action, you just have to be patient for those moments to pop. Thankfully the problem areas don't lead to any eye strain, they just don't look as convincing as they could if the protruding object stopped maybe a few inches back away from the camera.

Ultimately what we see here is the best possible presentation of a very entertaining albeit basic martial arts film. All credit to the cast for bringing their best a-game abilities to this show. There’s some great talent on display throughout the movie with intricate choreography and large-scale fight sequences. There are some fights that look a little flimsy, but most work. Dynasty is a great ride. It’s a great turn-off-your-brain popcorn-munching thrill ride. There's a welcome tongue-in-cheek sense of humor with relatively bloodless eviscerations and decapitations and lots of lost limbs. If you’re not laughing at one of the villains who just had his hands cut off attacking our hero up a tree with a giant branch braced in his arms I don’ think there’s much help for you! Then you have the final battle which is just wild and a true spectacle in 3-D.

Vital Disc Stats: The Blu-ray
Dynasty lands on Blu-ray thanks to 3-D Film Archive and Kino Lorber Studio Classics. Pressed on a Region A locked BD-50 disc, the disc is housed in a standard sturdy case. The automatically triggers the Blu-ray 3-D presentation arriving at an options menu allowing you to switch to Anaglyph red/blue 3-D if you want or the 2-D - from there you can choose if you’d rather watch it flat in 2-D. 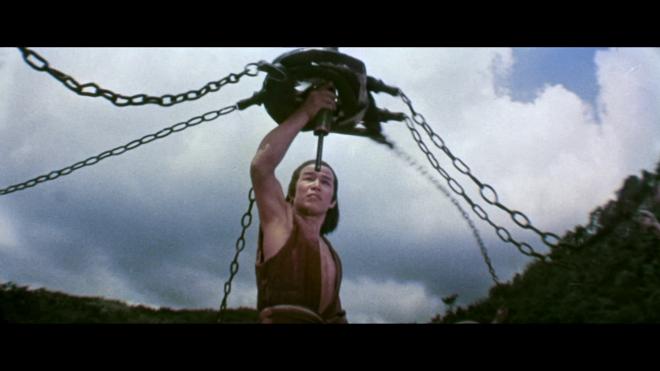 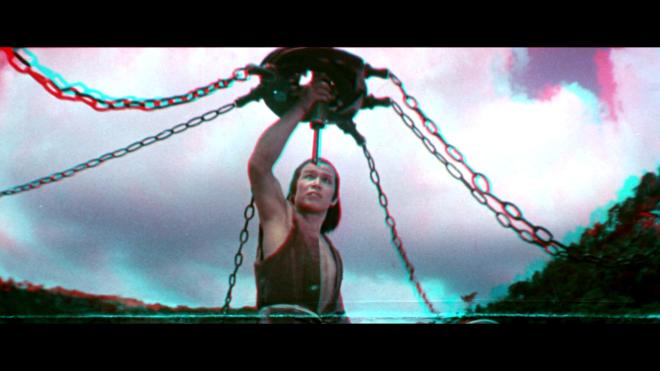 As I briefly touched on in the review, 3-D Film Archive had a steep uphill battle restoring Dynasty to 3-D Blu-ray in a way that not only works for the format but is even remotely watchable. When the disc starts, there is a disclaimer card detailing some of the work they put into this, but that’s putting things lightly. Over the last few months, I’ve kept in contact with them about this project and there were serious issues to contend with from severe scratches and speckling to vinegar syndrome and color fading. And that’s before the numerous alignment issues were even addressed. So, this isn’t a pretty film, to begin with. Compared to their other 3-D releases like Gog or most recently Wings of the Hawk, it’s not the greatest looking event film, but for this specific title, this is an impressive effort to deliver fans the best possible 3-D presentation that’s likely even better in some ways than what was offered during the initial theatrical run. You just need to ride in with expectations firmly in check.

As an overall view, the 3-D photography works. Viewed flat, the film loses some life and vigor. The shots of swords, claws, or any object poking out of the screen and holding for a few seconds just feel silly. In 3-D they’re still silly, but the added depth gives them a reason for being there. Again, many of these shots have baked in parallax issues that could otherwise be mistaken for ghosting. It’s not a ghosting problem. It’s just there. While there are many 3-D effects shots with issues, there are several sequences that look outright amazing. Some of the protrusion shots were done right and give you that desired comfortable and impactful sense of depth. Middle/wide shots where there aren’t any foreground objects obscuring the focus look terrific giving you a great sense of depth along the z-axis. 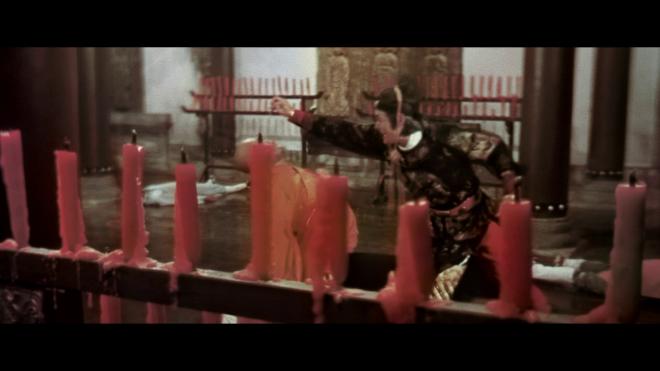 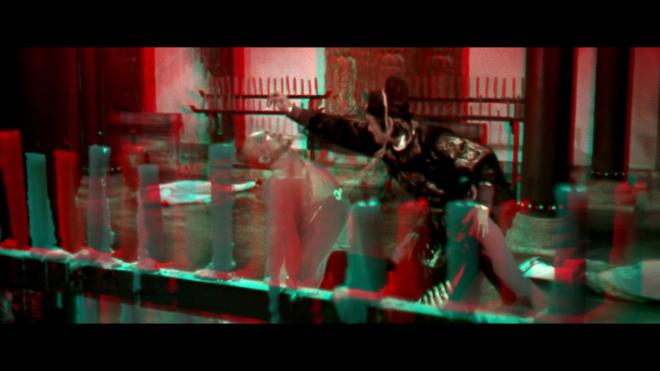 In 2-D it’s much easier to see the faults of the film. One of the principal issues was during filming the Super-Touch 3-D lens had loose opticals leading to flickering light issues, color issues, among other problems. There’s a lot of dirt and grit in the lenses that are permanently visible. Again, focus is a frequent problem, the foreground objects for some fight sequences are often the only thing in focus when mid-range actors and objects should be the point of focus. A fight in a shrine with red candles is a key example where the candles are perfectly in focus - everything else, not so much.

3-D Film Archive and KLSC also included Anaglyph Compatible 3-D. Similar to what 3-D Film Archive was able to bring to Silent Madness 3-D, this is an exceptional anaglyph presentation. Still not as good as the digital Blu-ray 3-D presentation, but it’s very good and gives you three-dimensional image depth while being easy on the eyes. I have a tough time with the red/blue glasses in general, but this was a very comfortable viewing experience overall. Considering this transfer was cobbled together from the best elements available with its own set of cooked-in irreparable issues, Dynasty comes home to 3-D Blu-ray in fine form. 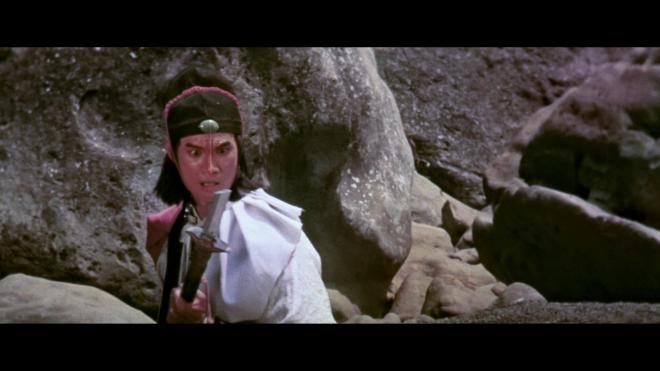 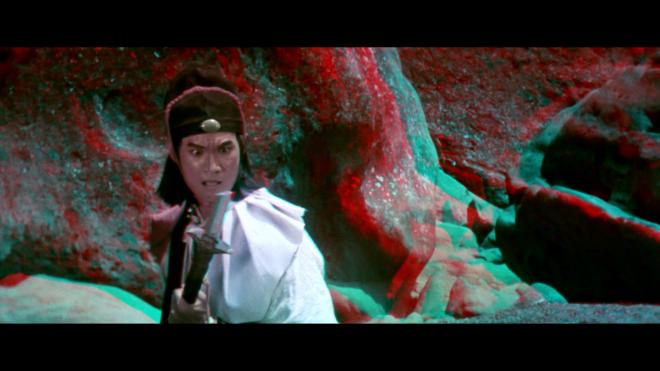 This release's best aspect is the restored 4-channel quadraphonic soundtrack in a robust DTS-HD MA 5.1 mix. There are several random cuts and pops in the film that affect the track but otherwise, this is a dynamic high-energy audio mix with plenty of imaging and atmosphere in the soundscape. The action sequences are the primary highlight often giving a wall-to-wall field of sound. Horses galloping, arrows flying at the screen, punches, kicks, breaking jars - everything lands with impact. The English dubbing can be a little ridiculous leading to some notable rubber-mouthing, but that’s to be expected with a martial arts movie of this era. Also included is a DTS-HD MA 2.0 mono track that’s pretty good in its own right,  but the 5.1 mix is absolutely the best way to go. 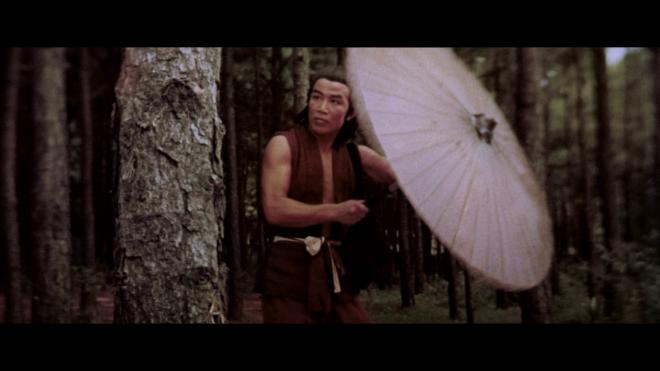 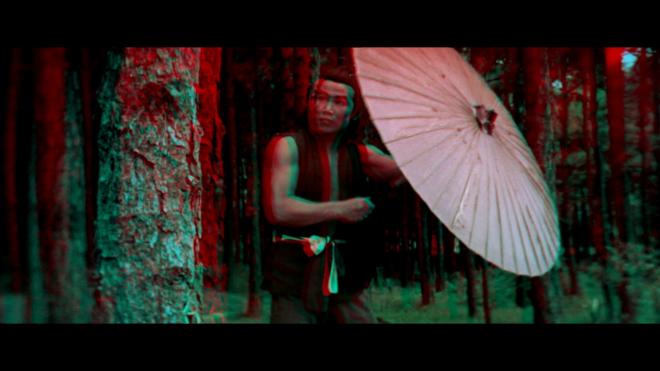 Not to skimp on bonus features, this disc comes with some interesting extra materials. Right out of the gate, an essential piece is the 10-minute Super-Touch Lens System featurette hosted by Mike Ballew. It’s a wealth of information and highlights how easily a production like Dynasty can have presentation issues because of this 3-D system. After that, we get the very cool House of Terror 3-D comic book. It runs through the pages automatically so you’ll have to hit pause on each page to read it, but it’s a lot of fun. Then you get some great 3-D still photograph presentations with a really cool 3-D animated music video. 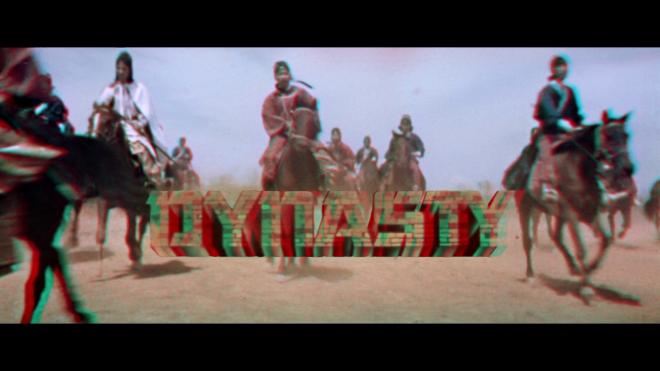 Dynasty isn’t a great movie - but it’s very entertaining. It’s high-energy with some great action spectacle all captured in 3-D. While the system used to capture the film was problematic, there are amazing flourishes of visual potential. After another successful Kickstarter effort, The 3-D Film Archive has managed to do something of the impossible and restore this 70s martial arts gem to some semblance of glory.

The transfer may not be the most beautiful ever, but you can feel and appreciate the restoration effort. Presented in Blu-ray 3-D, 2-D, and Anaglyph 3-D, the image itself is in respectable shape but 3-D adds to the big-action fun. Audio quality is generally excellent and bonus features are informative while also giving some more meat for 3-D film fans to chew on. If you're a 3-D fan, the 3-D Film Archive delivers another essential for the collection. Highly Recommended.