DC and Warner Bros. have swung in late in the year to bring the sequel to their mega-hit franchise film Wonder Woman, titled WW84 straight to HBOMAX home streaming the same day it hits theaters. With a bigger budget, larger cast, and set in the popular 1980s, one could expect to watch the best superhero film since Avengers: Endgame. This couldn't be further from the truth though as WW84 is the absolute worst superhero film to come out since Catwoman in 2004. In fact, WW84  is so lifeless and humorless in every element from its acting to action sequences or lack thereof, down to the truly deplorable screenplay - the film becomes a Hallmark version of a superhero movie. Yuck! Wonder Woman deserves better.

Film director Patty Jenkins returns to helm the motion picture with more money, but it seems like she had zero interest in being there. What worked so well in the first Wonder Woman on an emotional level is void here. There are no sequences that promote or conjure up applause or a big heave or intake of air in anticipation of something great and memorable happening. It all falls flat on its face and is completely uninspired, lazy, and looks so terrible visually that one could estimate that a 6th grader made the film and staged the small fight choreography. Not to mention the film turns into the recent musical CATS in the final act. The guess is that when the writer of all three of The Expendables films come aboard, this is what happens.

The movie starts out once again with Diana Prince as a young girl engaged in a big Olympic-like competition on Themyscira against older Amazons, which showcases the little girl able to best her elders in competition on horseback, archery, and jumping high in the sky. She is however disqualified for cheating and is taught a harsh lesson in truth. While this scene is truly colorful and grand, the CGI effects of the Amazons running and leaping through these obstacles is downright laughable and painful to watch. It's the same visual effects they'd use on the SYFY channel. These are the same effects that take place throughout the rest of the movie which begs the question - Where did all the $200 million budget go towards? 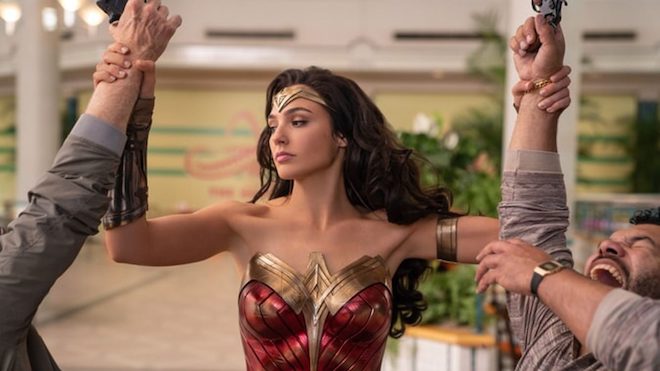 Fast forward a few decades later from the first film set during WWI and exchange old-timey military uniforms and corsets for fanny packs, hyper color t-shirts, and big hair - resulting in Diana Prince (Gal Gadot) stuck in a bad 80's movie. This first sequence takes place inside a mall that takes its time showcasing all of the nostalgic stores, clothing, and music, whereas a group of men robs a jewelry store's backroom for ancient artifacts that goes terribly wrong, that has Wonder Woman in full gear swinging her golden lasso to save the day. This plays out like something that would be shown on Saturday morning on the Disney Kids network. It's so dumb and uninspiring that it makes no sense whatsoever what kind of tone the film is trying to convey other than that Wonder Woman can do Wonder Woman things like jump in slow motion in the air and twirl her lasso and round up the bad guys like a couple of cattle.

Diana's day job is working at the Smithsonian as a senior anthropologist, specializing in ancient cultures as comes across a strange rock-like crystal that may grant one wish to anyone who touches the object. Diana befriends Barbara Minerva (Kristen Wiig), also an anthropologist who plays the nerd of the film who is constantly bullied by co-workers and drunks on the street, despite her warm, sunny, and fun disposition. There's no reason for her to be treated so poorly by everyone, but she makes her wish on the stone to become as confident and cool as Diana, which ultimately takes a drastic turn into the feline territory of Wiig turning into a cat that hisses.

Meanwhile, a con-man on television named Maxwell Lord (The Mandolorian himself Pedro Pascal) wants to donate a ton of money to the Smithsonian, but his sinister motive is to steal this wishing stone and make himself the most powerful person in the universe by turning himself into the actual wishing stone and granting everyone's wishes in return taking all their power and money - which of course results in an apocalyptic type of scenario. It's all laughable and void of any real emotion or fun, which is what these movies should incorporate. The only real genuine part of the film is with Chris Pine, returning as Steve Trevor when Diana wishes for him to come back to life in the form of his soul inside another person's body in the present day, but it's Chris Pine that is seen and heard throughout the film which culminates into the sub-par emotional moment of the movie where Diana has to make a sacrificial choice. However, it's played out with full cheese and zero impact. What a waste of an otherwise potentially great sequence.

And that's the overall sentiment and tone of WW84 - a waste of time and talent where it seemed like nobody wanted to be there. Gadot's performance is lifeless and looks like she's just reading cue cards to get through to the next scene. Wiig is great until she makes her wish and goes full villain, wherein the character makes no sense and is just mean and rude to no avail- even leaving her character open-ended in the finale. Pine is charming, but again, he's always charming and fun to watch on screen, but here - the material isn't there for him to shine. Pascal perhaps has the most fun with his character, playing him over-the-top and smarmy to a comical degree, but his version of this character doesn't match with anyone else's performance, leaving him on an island of loneliness.

WW84 should be ashamed of itself. The filmmakers couldn't even call it Wonder Woman, but instead a hashtag-like title for social media - WW84. There's nothing redeemable about this movie. It's pacing is slow as molasses as there are no real big fight scenes or action sequences until 90 minutes into the film and then it's completely laughable and filmed so poorly that it's difficult to tell what is happening on screen besides a woman jumping and dodging bullets in slow motion. It gets tiresome really quick. There is also no sign of any other DC superheroes making a cameo appearance, but there is a credit sequence that is lightly fun, but by then - the damage has been done. WW84 deserved better but turned out to be one of the worst movies in years. And to think this director Patty Jenkins has received her own Star Wars production is just downright scary at this point.

WW84 is not a good movie - at all. It lacks any entertainment value or fun, which is what DC and Warner Bros. should be striving for these days. They were on the right track with Shazam!, but everything went back to zero with this sequel. It's all a huge disappointment and not the holiday gift anyone was hoping for. Instead of that new shiny bike with all the extras attached, WW84 is a used lump of coal with slime. Fans of the film are sure to be curious, but will surely be disappointed.