The last couple years have been a great time for superhero movies with the genre arguably reaching its pinnacle in 2017 with James Mangold's outstanding Logan and now Patty Jenkins's surprisingly exceptional Wonder Woman. And the two films couldn't be more drastically different from each other. Whereas Mangold gave fans a dark and bleak western-themed interpretation of the beloved retractable-clawed antihero, Jenkins went vividly bright and optimistic in the legendary American hero's first solo outing. Of more interest is that the director of Monster has accomplished something others have not or perhaps avoided in even attempting because the result could be tremendously corny and schlocky. Aside from a few minor alterations, this is arguably one of the most faithful comic book adaptations made where Jenkins even embraces the iconic character's entire mythos with genuine seriousness, though the script in which Zack Snyder takes co-writing credits borrows from both the classic comics and some of the newer mythology. The miracle here is that Jenkins pulls it off without it also feeling laughably cheesy.

Part of the film's success also pays a huge debt to Gal Gadot's perfect performance as the Amazon warrior and demigod Diana Prince, who simply ignites the screen from the moment she makes her appearance during a training battle. (This also marks the Israeli actress's first star vehicle, just one of many firsts in this production.) Other than sporting a memorable smirk that seems to revel in the joy of a challenging fight or suddenly switching to a strongminded glare suggesting a deeper, yet-to-be-seen determination, Gadot ideally captures the spirit and strength of the character. Everything seen on screen is what has made her such an influential and lasting icon in a fictional universe almost completely dominated by male superheroes, and Gadot breathes life to this superheroine unlike what we've ever seen before. (With all due respect to Lynda Carter's wonderful contribution, of course.) In her silver-screen debut, this Wonder Woman is strong-willed and determined, aspiring to be a hero and born with a desire to use her natural gifts to help and save humanity, not accidentally or miraculously granted to her, making her somewhat of a unique superhero. 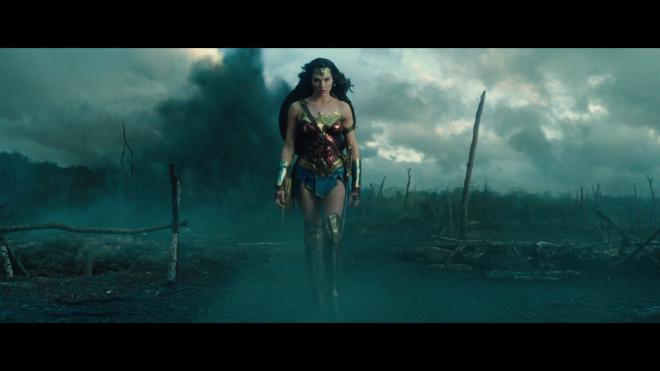 But this single-mindedness and growing up isolated on the remote island of Themyscira has also made Diana pretty naïve and unsophisticated about how complex the world truly is, leading to several fish-out-of-water jokes when touring Europe at the height of World War I. And again, Gadot makes this naïve innocence effectively charming rather than an eye-rolling nuisance, thanks in part to Chris Pine, with whom Gadot displays great chemistry, serving as a reluctant guide through early 20th Century customs in the moderately competent spy Steve Trevor. Also helping Diana acclimate to the strange and foreign ways of the modern world, if only on a small scale, are an ensemble of allies and tricksters, starting with Trevor's secretary Etta Candy (Lucy Davis), who sadly doesn't do terribly much beyond a winking nod to comic book fans. Joining Diana's quest to kill the nefarious influence of Ares, the God of War, upon humanity is Saïd Taghmaoui, Ewen Bremner and Eugene Brave Rock as a bosom band of buddies and mercenaries. Back in England, David Thewlis as Sir Patrick greenlights the super-secret mission while also negotiating peace on the side.

In spite of these friendly voices at her side, Diana remains vigilant throughout with a single goal in mind, and the filmmakers use her simplistic, black-and-white worldview to their advantage, slowly revealing beneath all those superpowers lays a fragile person in serious danger of a rude awakening. The problem with evil and the world's ills is that it can't be sourced to an isolated origin or solved by one solution, but complex, messy and ultimately mystifying. On the one extreme, it can be heartlessly driven by the pursuit of power and greed, as seen in Danny Huston's General Erich Ludendorff, or on the other, it is nurtured and develops inside hearts full of hate and a rage against the world, as exemplified by Elena Anaya's Isabel "Doctor Poison" Maru. Ultimately, this predictable revelation is done in massive explosions and fiery mayhem fashion, typical of all superhero movies, but the film introduces a concept that oddly feels revolutionary and sets her apart from her male counterparts, living up to her famous moniker as a disciple of peace and love. As Aphrodite's agent, Wonder Woman is one of the better and surprisingly inspiring superhero films of recent memory, earning her place in her first solo outing as an equal to an established legend like Logan.

Warner Home Video brings Wonder Woman to Blu-ray as a two-disc combo pack with a flyer for Mattel merchandise and a code for an UltraViolet Digital Copy. Inside a blue, eco-elite keepcase with a glossy, lightly-embossed slipcover, a Region Free, BD50 disc and a DVD-9 copy of the movie sit comfortably on opposing panels. At startup, viewers can skip a couple trailers to a generic static menu screen with options along the bottom and music playing in the background.

The legendary American superhero fights for truth and justice on Blu-ray with a stunning reference-quality 1080p/AVC MPEG-4 encode that's simply gorgeous and extravagant from start to finish.

Shot on a combination of traditional 35mm film stock and the Arri Alexa 65 digital camera, the freshly-minted transfer invades with razor-sharp lines in every scene, including the fast-paced action sequences. Little clumps of dirt are distinct as they fly across the screen, sparks from the bullets hitting Diana's shield and bracelets are dramatic and discrete, and viewers can make out the smallest imperfection and chink in the armored military vehicles and the architecture. Individual leaves in the trees and blades of grass are unmistakable, and the lettering on bottles, window shops, maps and books are legible at all times. The tight threading in the elaborate military uniforms are amazingly plain to see, along with the stitching in each patch, while the separate hairs in the fur remain evident, and the tiny creases in the leather of Wonder Woman's iconic costume are at times striking to see during close-ups.

The high-def presentation also displays spot-on contrast that delivers superbly clean, crisp whites, keeping things upbeat and energetic with amazing crystal-clear clarity in the far distance. A good portion of the movie was shot with a grayish, near-monochromatic palette, making much of the picture feel pretty bleak and dour, but the video remains surprisingly vivid. Faithful to the teal-orange cinematography of Matthew Jensen, primaries are not hampered by the stylized photography with reds looking particularly sumptuous and some very enthusiastic blues electrifying much of the action. Although largely limited, secondary hues furnish the video with a great deal of warmth and animation during several interior shots, and facial complexions appear healthy with revealing, lifelike textures. Most impressive are the luxurious, inky rich blacks that make Diana's jacket all the more glamorous and her raven hair glisten in the light. Shadow detailing is outstanding, allowing every nook and cranny in the darkest portions to remain visible, providing the 2.40:1 image with an appreciable cinematic quality and a three-dimensional depth.

The summer's biggest blockbuster leaps into action with an equally fantastic Dolby Atmos soundtrack that while making better use of the surrounds, effectively employs the ceiling speakers on several occasions.

Airplanes zoom above the listening area, bullets whiz in every direction, and debris showers down from above during the many battles, with the climactic battle against Ares being an impressive highlight. Rupert Gregson-Williams' thrilling tribal-drum, brass-heavy score makes the most consistent use of the overheads, consistently bleeding into the top front heights and surrounds during the most action-packed moments. Quieter scenes are noticeably more restrained with the subtle atmospherics occupying the sides and rears while the space above goes pretty much silent.

Nevertheless, the track generates a highly satisfying dome-like soundfield when the action calls for it, but a greater deal of attention is placed along the front soundstage, which feels broad and spacious from beginning to end without fail. Again, the score benefits tremendously from the extra breathing room, displaying outstanding warmth and fidelity in the orchestration. The mid-range is extraordinarily dynamic, exhibiting superb detailed clarity and separation during the loudest, ear-piercing segments so that every piece of debris, metallic clink and the hiss of poisonous gas remains perfectly audible. A robust and awesomely responsive low-end delivers a massive, wall-rattling presence to every explosion and when Wonder Woman uses her metal cuffs, sometimes digging into the ultra-low depths at high decibels. With precise, well-prioritized vocals, the object-based mix is sure to ignite anyone's home theater.

Finding the Wonder Woman Within (HD, 23 min): A thoughtful piece on the character and her influence, inspiring many generations in a variety of fields.

Crafting the Wonder (HD, 16 min): EPK-like short doc made from a various cast & crew interviews discussing the plot, characters and the overall production with tons of BTS footage spliced in.

The Trinity (HD, 16 min): An interesting discussion on the character and how she compares to DC's two other famous superheroes, exploring what makes her unique and how that's translated to film.

The Wonder Behind the Camera (HD, 16 min): A chat with the women who participated in the production and their individual contributions to bringing the comic book character to life.

Warriors of Wonder Woman (HD, 10 min):  A more in-depth look at the Amazon warriors populating the island with attention to their rigorous training regimen and preparation for their respective roles.

Wonder Woman at War (HD, 6 min): On the set for shooting the pivotal "No Man's Land" sequence.

Themyscira: The Hidden Island (HD, 5 min): On location, comparing the design of the island.

Beach Battle (HD, 5 min): The director reveals the amount of preparation that went into the sequence.

A Photograph Through Time (HD, 5 min): A closer examination of the photograph connecting other films.

Diana in the Modern World (HD, 5 min): Discussion on Diana's reaction to women of the 21st Century.

Epilogue: Etta’s Mission (HD, 3 min): The character is given her own heroic moment to shine on screen.

Morning at the Train Station

After decades of her male counterparts enjoying standalone projects and Hollywood fame, Diana Prince finally makes her big-screen live-action debut in Wonder Woman and conquers the world by becoming the biggest box-office draw of the summer. Directed by Patty Jenkins and starring Gal Gadot, the comic book character's first solo outing lives up to her moniker as a disciple of peace and love, making the film one of the better and surprisingly inspiring superhero films of recent memory. The Blu-ray fights for truth and justice with a stunning, reference-quality video and a highly-satisfying Dolby Atmos soundtrack that'll give anyone's system a healthy workout. With a nice collection of supplements to boot, the overall package comes highly recommended for fans of both the character and superhero movies in general.