Kino Lorber Studio Classics continues its love for the old west with Western Classics II delivering The Redhead from Wyoming, Pillars of the Sky, and Gun for a Coward to Blu-ray for the very first time. Each film delivers a solid A/V presentation and an audio commentary to punch up the bonus features. These may not be the best entries in the genre, but they’re entertaining and worth adding to the collection. Recommended.

From the very beginning, the Western has been a mainstay of filmmaking. A studio could spend a lot on big stars with elaborate location shoots - or they could go cheap and recycle sets on the backlot with a cast of no-name B-movie actors. Regardless of production values, Westerns were a profitable genre for decades. With so many films coming out from so many studios; more than a few got lost in the noise.

KLSC’s Western Classics II resurrects three lost Universal Studios favorites with the Maureen O’Hara’s 1953 adventure The Redhead from Wyoming, Jeff Chandler’s 1956 action-thriller Pillars of the Sky, and Fred MacMurray’s 1957 family drama/actioner Gun for a Coward. Each of these films brings a very different approach to the genre, but each does an impressive job setting up big action sequences with an impressive cast.

The Redhead From Wyoming 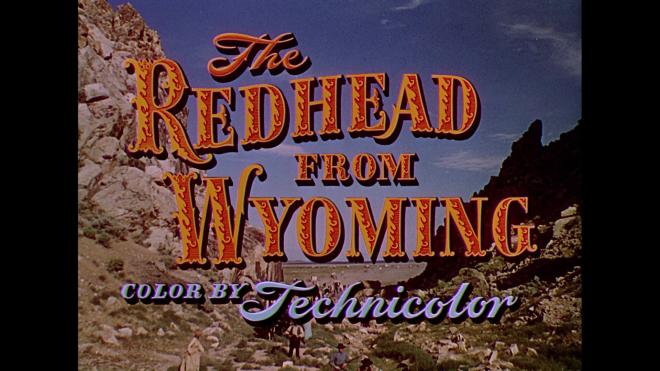 Kate Maxwell (Maureen O’Hara) is a saloon owner gambling big on a new location going into business with promoter Jim Averell (William Bishop). Little does she know, Jim’s a rustler using her name as a brand to steal cattle out from under a local rancher. When the straight-arrow Sheriff (Alex Nicol) gets involved, Kate will have to choose a side and live with the consequences. While this film can meander a bit, it comes together in the last half setting the stakes for a big showdown and a hell of an action sequence. Great performances from O’Hara, Bishop, and Nicol keep this show aloft through the slow stretches. I appreciated there’s a romantic subtext, but it doesn’t define O’Hara’s role allowing her character to stand alone and pick up a rifle of her own when the time comes.
3.5/5 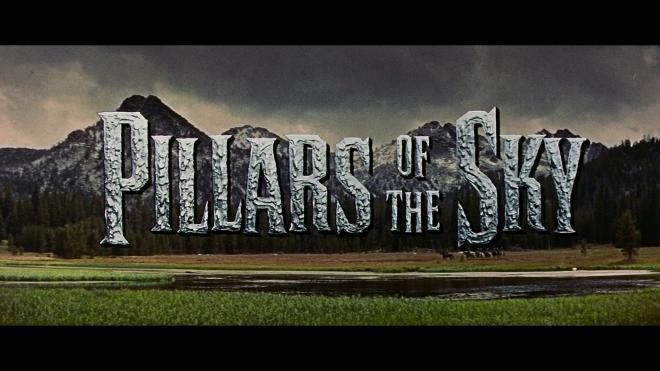 Jeff Chandler is Emmett Bell, the First Sergeant of a division of Indian scouts policing an Apache reservation in Oregon. When white settlers encroach on the reservation land. Outmanned and outgunned, Bell and his men must lead a convoy of innocent people through hostile territory. Chandler once again finds himself in the comfortable position of being a reluctant man of action. There’s a love-triangle subplot that fails to meaningfully materialize, but when the action picks up it’s a heck of a thrill ride.
3.5/5 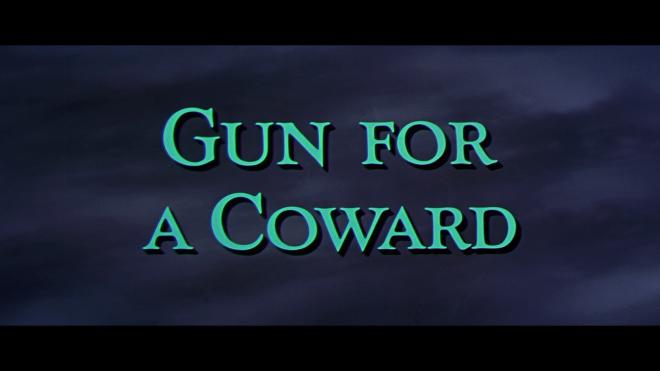 Not every western has to be about settlers versus native people with the cavalry riding in to save them. Sometimes plenty of action can come out of a good old-fashioned family drama. Fred MacMurray is the oldest of the three Keough brothers who have carved out a profitable living raising cattle on the far western frontier. His youngest brother (Dean Stockwell) is a brash hothead. His middle brother (Jeffrey Hunter) is slow to a fight branding him a coward. But when a rustling outfit threatens their cattle and their lives, the brothers will have to find a way to set aside their differences for the fight to come. This one may move a bit slower, but it’s the most rewarding. While a basic family drama at heart; the great performances and the big frontier feel sets it apart.
4/5

After the first volume of KLSC’s Western Classics, it’s nice to see some more genre classics find a home on Blu-ray. These are the sort of films that don’t get a lot of recognition and are rarely ever seen outside of a late-night run on TCM. As a fan of the genre, I love to discover new westerns and these collections have been a treat. Some tend to be on the iffy side or outright skippable, but lately, the newer releases coming out of Kino Lorber Studio Classics have been some better top-tier efforts. Granted, the three films found in this set might not have been worth solo release efforts, but together and at this price point they’re an attractive addition to the collection. Not the greatest movies ever made, but each is entertaining in its own way and well worth checking out.

Vital Disc Stats: The Blu-ray
Western Classics II arrives from Kino Lorber Studio Classics in a three-disc Blu-ray set. Each disc gets its own standard keepcase bound together with a paperboard slipbox. Each disc loads to a static image main menu with traditional navigation options.

Each of these films comes out of Universal’s deep catalog. In the past that would lead to some measure of worry about the quality of the masters, but each film appears free of troublesome edge enhancement or compression artifacts. These aren’t picture-perfect, but they’re pretty great. Fresh restorations would have been amazing, but again, these aren't high-demand titles so we're pretty lucky with what we're getting. 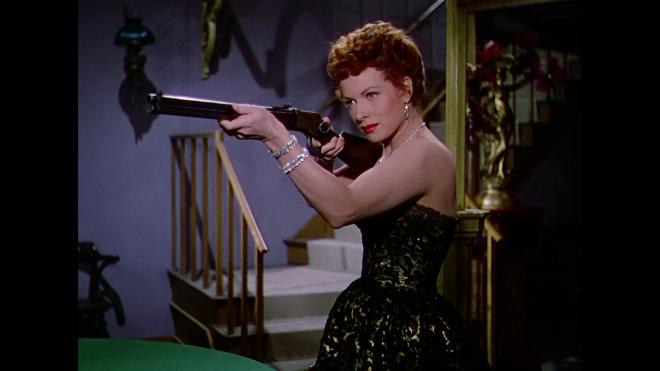 With an impressive 1.37:1 1080p transfer, Redhead from Wyoming is a bold bright and colorful western with that Technicolor flair. This master appears a little dated, but it’s nothing of the old Universal catalog releases that were riddled with edge enhancement. This image is clean and clear with impressive details and image depth. Costuming and set design and the scenic locations are given their due. Some slight judder is present, and there are a few very brief moments of color separation. Slight speckling pops up but nothing serious or distracting. All in all, this is a pretty great-looking transfer. 4/5 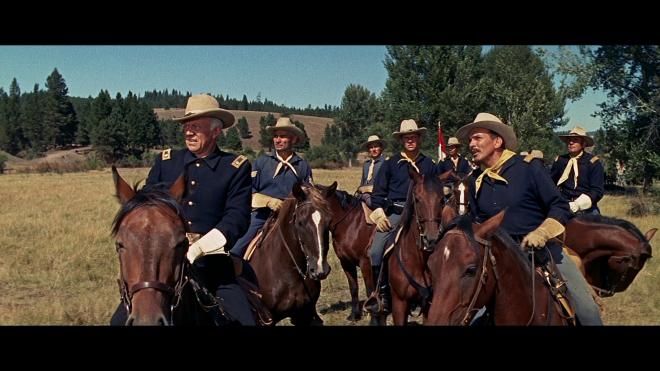 Arriving on Blu-ray with a 1080p 2.35:1 transfer that brings another Technicolor marvel to bold colorful life. This master may not be in the greatest shape, there is more frame judder and much more apparent speckling than Redhead. While colors are bold with terrific primary presence, the rest of the image is a bit lacking. Details never really come to life and the grain structure is thick and smeary. As such facial features, clothing, and scenery detail can fluctuate from shot to shot. Not terrible by any means but not ideal either.
3.5/5 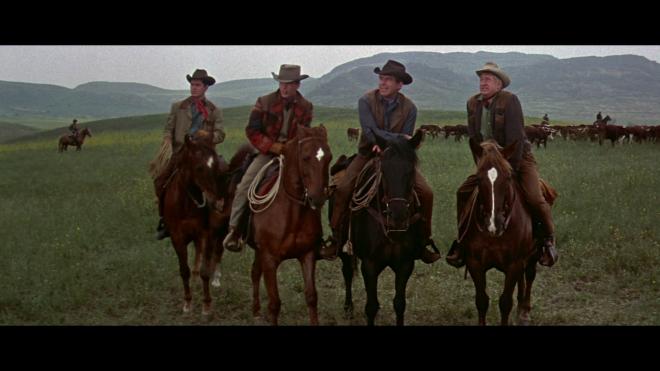 Similar to Pillars, Coward doesn’t pick up a new scan or restoration for this 1080p 2.35:1. This bold colorful cinemascope production has some beautiful colors and scenery, but it doesn’t quite come to desirable HD life. Middle and close-up shots are decent but wide shots and establishing shots are on the soft side. Film grain is thick and smeary. Speckling is present and becomes more intrusive around optical transitions and fades. Again not terrible, certainly an upgrade over DVD and watchable, but could have used a fresh scan/restoration effort.

The good news for each of these films is they come with solid DTS-HD MA 2.0 audio tracks. While there are a little bit of age-related artifacts here and there; some hiss and occasional pop, overall these tracks are clean and clear. I felt Redhead from Wyoming was a bit on the quiet side, I had to pop the volume a time or two but nothing terrible. Pillars of the Sky and Gun for a Coward each offered impressive audio tracks allowing the big open vistas to play into the mix for the large action sequences. The cattle stampede in Coward is a big highlight. All around solid audio mixes for each film that get the job done.

The Redhead from Wyoming

The Redhead from Wyoming, Pillars of the Sky, and Gun for a Coward may not be the biggest fan-favorite westerns to come out of Universal’s back catalog, but they’re certainly entertaining adventures. With great casts and solid directing, each of these movies passes the time nicely. Collected together in Kino Lorber Studio Classics’ Western Classics II - you get three fun flicks at a great value. The Redhead From Wyoming looks the best of the bunch with Pillars of the Sky and Gun for a Coward rocking decent but older masters that could use a little TLC. Each film lands with an informative audio commentary to prop up the extra features. If you’re a genre fan you’re getting your money’s worth. Recommended