Kino Lorber Studio Classics delivers Western Classics Vol 1. to Blu-ray with three great catalog films, When The Daltons Rode, Whispering Smith, and The Virginian. Featuring genre stalwarts the likes of Joel McCrea, Brian Donlevy, Alan Ladd, and Randolph Scott - you get three entertaining movies that are classic examples of the genre; simple, to the point, and a lot of fun. A/V presentations are a little mixed but serviceable for the cause while each film earns an informative audio commentary track. If you're a fan of the genre - it's worth picking up. Recommended

When the Daltons Rode

Randolph Scott finds himself playing lawyer and advocate for the legendary band of family outlaws The Daltons. Featuring Brian Donlevy, George Bancroft, Broderick Crawford, and Kay Frances as the love interest - the film plays loose and groovy with the facts of the historical gang, but Andy Devine gets to both play comedic relief and action star and often overshadows his compatriots. Considering his history as an icon in westerns, it's weird to see Randolph Scott playing back seat without any action moments. It sticks to conventions even if this version was oddly more sympathetic to the "bad guys." When the Daltons Rode maybe plays closer to a period gangster noir movie in that respect using the iconic gang as a pitching point. Still good fun. 3/5 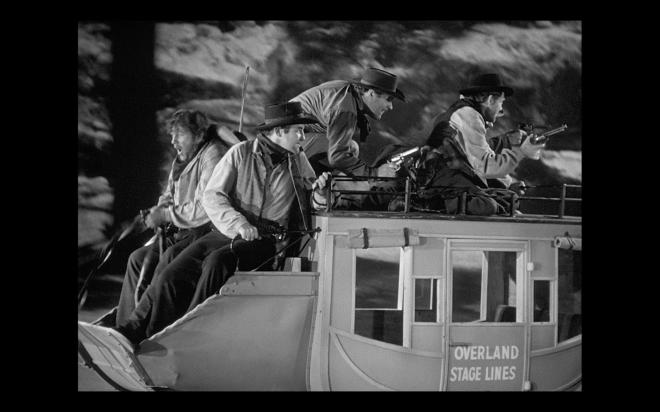 Fans of classic television will know this name probably a bit better than they know the movie. Based on the excellent novel by Owen Wister -- that's well worth reading -- Joel McCrea stars as Virginian a simple cowhand who works the frontier of a far west community. When Barbara Britton shows up as the new school teacher, the world becomes topsy turvy as Virginian comes to learn his best friend played by Sonny Tuffs has fallen in with a gang of cattle rustlers led by the always welcomely evil Brian Donlevy. Friends playfully sparring for the affections of the same woman become adversaries on opposite sides of the law. A playful film - The Virginian keeps to true western cinematic tropes through and through. Even without reading the book, it's not difficult to see where this one goes, but it's a dusty trail worth traveling for the great performances and beautiful Technicolor photography. 4/5 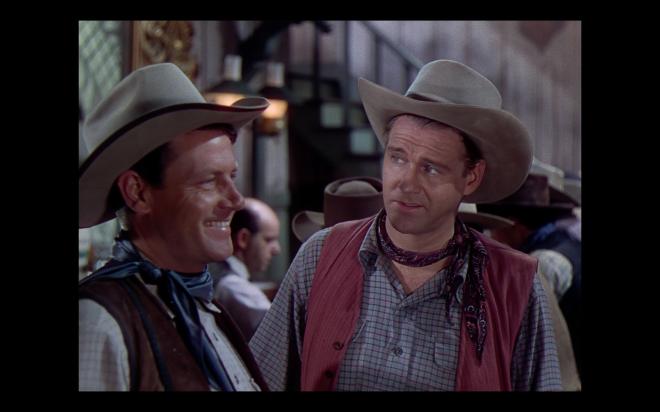 Allan Ladd plays railroad detective Smith - a man with a calm demeanor and sharp head who goes up against a gang of thieves who derail trains and steal the cargo. Hoping to find help with his old friend Murray played by Robert Preston, Smith finds himself in the crossfire of a very profitable -- and highly illegal -- enterprise. Is it too late to save his friend? As the evidence mounts, Smith will have to confront his friend head-on. Another true to form western, not too many surprises here beyond Robert Preston who is in peak form as the gregarious Murray. It's pretty wild to see him so young I actually didn't recognize him at first, but that over-the-top laugh is unmistakable! Again, like The Virginian, the movie doesn't hold many surprises, but is still a fun watch and impressive for the size of the sets built for this show including a full-scale train that could roll in and out of the indoor set! 3.5/5 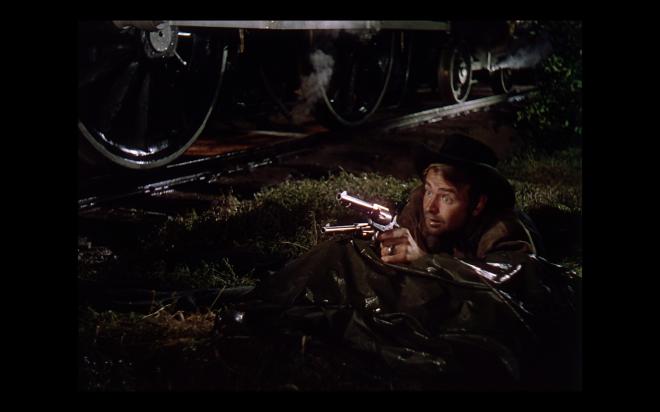 I love westerns ever since my dad loaded The Good, The Bad, and The Ugly into the family VCR. Westerns were the superhero movies of their heyday with every studio churning them out like a Ford assembly plant using the same sets and exterior locations on studio backlots with actors merely filling in spurs and saddles. They were cheap and easy to produce and could afford big-name established stars looking to finish up their contracts or emerging talent looking for a way to break out in the business. While I personally wouldn't call When the Daltons Rode, The Virginian, or Whispering Smith the finest examples of the genre, they're fun to watch and also solid representations of their time as middle-budget films. They're also great examples in that they're not the stereotypical "Cowboys vs Indians" shows and instead are closer to crime thrillers and character dramas. I've met too many people who dismiss the genre outright because they never gave movies like these three in this Western Classics Vol. 1 collection a chance. I've caught a couple of these a time or two on TCM and they're worth the time you give them.

Kino Lorber Studio Classics delivers Western Classics Vol. 1 featuring three films making their Blu-ray debuts - When the Daltons Rode, The Virginian, and Whispering Smith each getting their own Region A BD-25 disc housed in an individual sturdy Blu-ray case rapped in a cardboard book sleeve. Each disc opens to its own respective static-image main menu with traditional navigation options.

As each of these films represents the deep back catalog of Universal Studios' archives, they haven't exactly enjoyed the freshest of the fresh restorations. Dollars to donuts I'd wager these are older masters for DVD releases and HD broadcast moved over to Blu-ray. While that may sound bleak, I'm happy to report that overall things are pretty solid here.

When The Daltons Rode

Shot in black and white - and the oldest of the three films - it enjoys a respectable 1.37:1 1080p transfer that boasts some notable details and a healthy grain structure leading to a nice film-like presentation. Closeups fair the best allowing for costume details and facial features to come through nicely. There is some softness here and there but otherwise, the image is clear. Several action sequences used rear-projected backgrounds and that footage is pretty rough while all of the actors and their stagecoach or fake horse look just fine. Some nicks and scratches with a mild complexion of speckling are the worst of the damage. Grayscale is decent - blacks are pretty good by not quite inky while depth is appreciable.
3.5/5 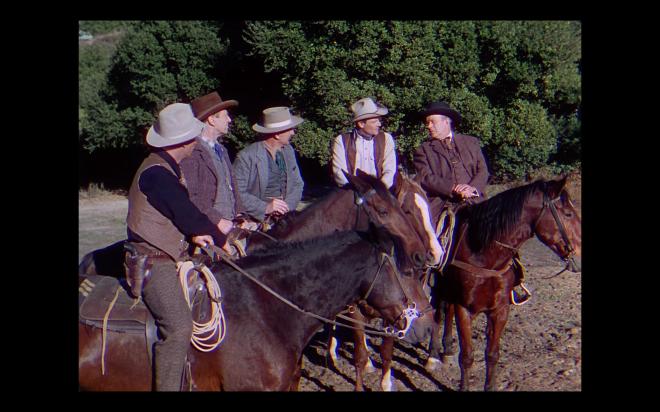 Shot in glorious Technicolor - this is a beautifully colorful movie and even with the modest restoration enjoyed whenever this master was created, it's still a pretty looking image. Details are robust with clean lines and a modestly apparent grain structure. There are a few sequences where film grain can look a tad gloopy but otherwise, those moments are relatively few and far between. Not having seen this movie in 15 years or so - the last time was on TCM - I wasn't expecting a miracle, but this is very good - except for an odd strobing color-shifting anomaly that crops up from time to time. Roundabout the 23-minute mark Joel McCrea and some actors are sitting on horses discussing plot details and an odd haloing effect strobes in and out with red and blue bands as if this sequence was spliced in from an old tape master. This anomaly creeps in a couple of times more but never for more than a few seconds. If it wasn't for that effect, this would be a 4-star transfer. As is, I just can't rate it that high.
3/5

As the youngest of the bunch, this is another Technicolor marvel with gorgeous color saturation offering bright bold primaries and healthy flesh tones. Throughout this 1.78:1 transfer there is an appreciable amount of film grain with strong details creating a nice film-like image, but it doesn't exactly blow your hair back. Softness remains indicative of an older master rather than a recent restoration. Middle shots are decent while closeups enjoy the finest details in facial features - Robert Preston's mustache and big toothy grin tend to fill the screen. Likewise costuming and production design look much better in closeups. Later in the movie when there's an on-location chase in the desert and the photography improves drastically with much clearer details all around. Without any notable speckling or age-related anomalies, this is the best looking of the three films. 4/5

Each film within the Western Classics Vol 1. series is afforded a DTS-HD MA 2.0 mono mix with overall pleasing results. When The Daltons Rode and The Virginian are at the top of the heap with great mixes. They have clean dialog, a decent amount of atmospherics even within the confines of a restrained mono mix. Sound effects also have an urgency to them - the chase sequence in Daltons or the cattle stampede in The Virginian provides an impressive auditory response and set the soundscape well considering they're clearly shot in a studio with rear projection for closeups of the respective cast. Gunfights also bring the welcome cannon-fire quality to every shot with great impact while scoring is clear and accentuates the films nicely. 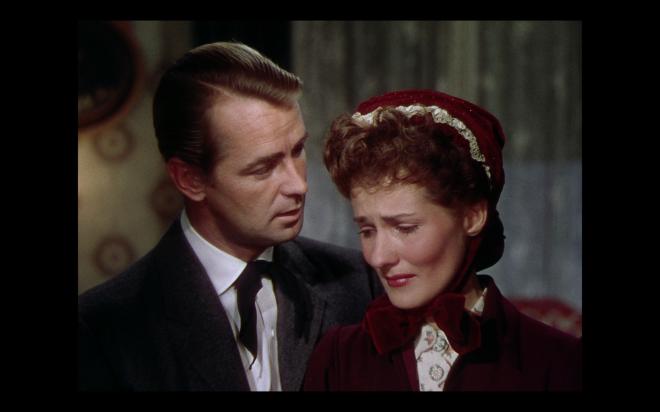 Unfortunately, Whispering Smith actually lives up to its namesake in a way that isn't altogether welcome. Most of the time, this is a clean and clear DTS-HD MA 2.0 mono mix with great dialog, dynamic sound effects - especially when the wrecking crew is cleaning up the train crash and the film's final gunfight/chase. However, levels aren't on point and require a lot of volume riding to a point of being frustrating. And this is specifically any time Alan Ladd and the love interest Brenda Marshall share any screen time alone together. As romantic acquaintances, they tend to speak in low hushed tones and it feels like the volume just drops right off the cliff. Where I can watch any movie - and most of this one - set at 17-20 - I have to crank their scenes to 30+ just to hear them speak. Thankfully it's not very plot-heavy material and more "oh if only things were different we'd be together…" material - it's still frustrating because immediately after their scenes end you have to crush the volume down hard and fast. Thankfully, their alone-time scenes are relatively few, so it's not a terrible issue, but one to contend with none the less.

While I wasn't expecting much of a bonus features package for Western Classics Volume 1 - it's nice to see that Kino Lorber Studio Classics offered up some commentary tracks. It's not much and they're largely anecdotal, but they're worth a listen. The rest of each film's bonus roster is made up of KLSC's traditional batch of related trailers.

When The Daltons Rode

Like their recent Film Noir Series - Kino Lorber Studio Classics has begun banding together some of the less prestigious but still worthwhile favorites with Western Classics Vol. 1. Featuring stars Randolph Scott, Joel McCrea, and Alan Ladd - When the Daltons Rode, The Virginian, and Whispering Smith represent fine examples of the genre and traditional tropes. You may be able to predict a lot of the plot points in these, but the great cast elevates the material and ensures there's never a dull moment.

Kino Lorber Studio Classics delivers a fine three-disc set. Each film comes with a respectable A/V presentation - that may not light the world on fire but they get the job done. Bonus features may be slim but an interesting commentary track is always welcome listening. If you're a fan of true classic westerns with the light of right and wrong clearly defined with heroes and villains quick on the draw - you'll have a great time with this set. Recommended.