The Pajama Game might not stand as the best screen adaptation of a hit Broadway musical, but thanks to the irrepressible talents of Doris Day, John Raitt, Carol Haney, and Eddie Foy, Jr., a buoyant score that includes such memorable hits as "Hey There," "Steam Heat," and "Hernando's Hideaway," and energetic choreography by the legendary Bob Fosse, it fires on all cylinders and delivers plenty of good old-fashioned entertainment. A delectable transfer struck from a brand new 4K remaster of the original camera negative bolsters the appeal of this blue-collar workplace musical that's as cozy as a pair of flannel PJs. Recommended.

Seven-and-a-half cents. It's odd to think an entire musical could revolve around such a pittance, but The Pajama Game makes those few pennies the crux of its conflict. The laborers at the Sleeptite Pajama Factory feel a seven-and-a-half-cent hourly raise would make them competitive with other industry workers and improve company morale, yet when their fair-minded demand meets resistance from company bigwigs Vernon Hines (Eddie Foy, Jr.) and Myron Hasler (Ralph Dunn), as well as newly hired superintendent Sid Sorokin (John Raitt), they launch their formidable Grievance Committee into action. The no-nonsense Katie "Babe" Williams (Doris Day) heads up the confrontational group and tries to broker a deal, but Babe doesn't count on falling in love with Sid (and vice versa), and though the couple tries to divorce their adversarial work relationship from their after-hours affair, they soon realize oil and water is easier to mix than business and romance.

An energetic, tuneful, but ultimately thin adaptation of the long-running Broadway hit, The Pajama Game features a host of memorable songs and a sparkling performance by the always adorable Day. Still, this George Abbott-Stanley Donen collaboration never quite captures our fancy like we hope it will. The featherweight plot merely strings together the bouncy musical sequences while paying lip service to the story's more weighty labor-vs.-management elements. I know, I know, this isn't supposed to be a musical version of Norma Rae, but a dash more substance would better frame the songs and make the love story more involving. 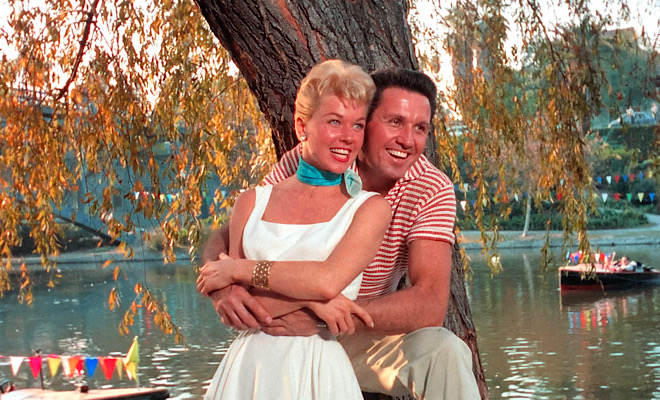 The hit-filled score, however, labors hard to cover any plot deficiencies. Richard Adler and Jerry Ross, who also penned the songs for the enormously popular Damn Yankees, which Warner would film the following year (and Warner Archive will release on Blu-ray next month), supply such standards as the melodic "Hey There," jubilant "Once-a-Year Day," defiant "I'm Not at All in Love," exotic "Hernando's Hideaway," and infectious "Steam Heat." They're all performed with plenty of showmanship, and though the latter number is little more than a novelty, the choreography by Bob Fosse makes it a showstopper. Fosse, who cut his teeth on the original stage production and shows off his more mature chops here, puts his inimitable stamp on all the dances, often showcasing the versatile Carol Haney, who plays the raspy-voiced Gladys Hotchkiss (a role that won her a Tony Award on Broadway), Babe's colleague and pal. Musical buffs undoubtedly remember Haney's sexy partnership with Fosse in the "From This Moment On" finale from Kiss Me, Kate four years earlier, and she's the perfect conduit - along with Fosse's wife Gwen Verdon, of course - for the choreographer's stylized moves. (Sadly, Haney would die a mere seven years later at the tender age of 39.)

Day, of course, sticks to vocals, and performs with her customary verve and richness. Whether belting full throttle in a charming competition duet with Raitt ("There Once Was a Man") or caressing the lyrics of the lilting "Hey There," she makes every song her own, and infuses the headstrong Babe with a hefty dose of spunk. Raitt, another Broadway import in his only film appearance, shows his leading man potential, and nicely blends his robust baritone with Day's mellifluous alto. Although at times slightly stiff and theatrical, Raitt exudes confidence and an understated machismo, and it's a shame Hollywood never developed his movie career. 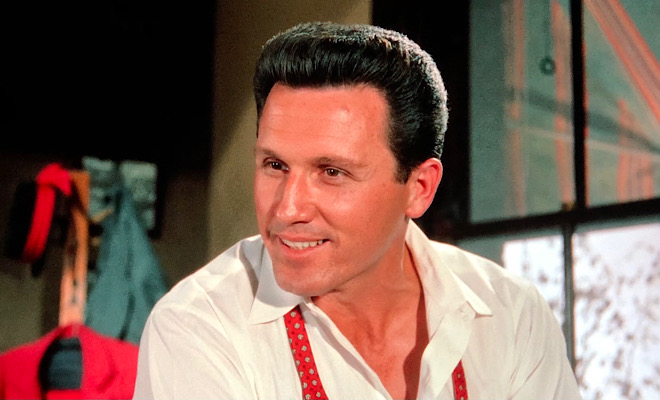 Aside from the cast's singing and dancing talents, the musical scenes - especially the high-spirited "Once-a-Year Day" - benefit from a mobile camera that allows the audience to feel a part of the numbers. Directors Abbott (who co-wrote the original book and screenplay and directed the New York stage production) and Donen (Seven Brides for Seven Brothers) nicely open up the show, but still maintain its Broadway feel and keep the musical moving despite its slim story.

I loved The Pajama Game when I first saw it as a teen decades ago, but it didn't quite live up to my memories this time around. Day is still delightful and the actors sell the lively score, but the story concentrates too heavily on secondary characters during its draggy second half and craves more meat and emotion. Such are the pitfalls of whittling down a full-fledged Broadway musical to 101 minutes, and as a result, The Pajama Game often feels like a truncated TV adaptation instead of a lavish, big-screen production. 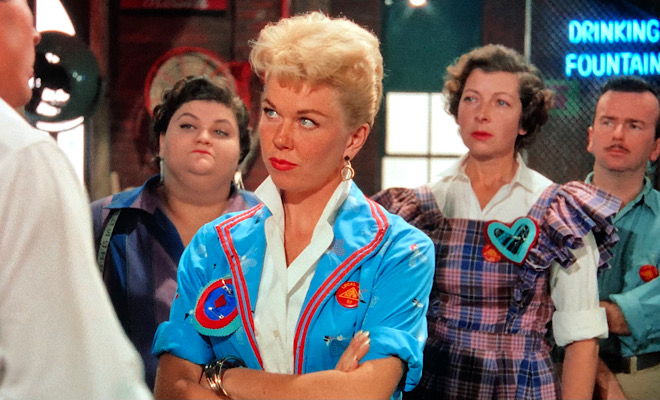 The Pajama Game arrives on Blu-ray packaged in a standard case. Video codec is 1080p/AVC MPEG-4 and audio is DTS-HD Master Audio 2.0 mono. Once the disc is inserted into the player, the static menu without music immediately pops up; no previews or promos precede it.

A brand new 4K master culled from the original camera negative yields another stunning 1080p/AVC MPEG-4 transfer from Warner Archive that's a big step up from the 2005 DVD. As usual, this transfer is all about the Technicolor - or should I say Warnercolor - and this superb rendering of the single-strip format rivals some of the best three-strip presentations. Reds pop off the screen, while the verdant greens of the lawns and trees during the picnic scene immerse us in the great outdoors. Pastels are just as vivid as primaries, and patterns like the red-and-white checkered tablecloth are rock solid while exuding plenty of vibrancy. Excellent clarity and pitch-perfect contrast combine to create an image that brims with depth and contains just enough grain to exhibit a lovely film-like feel. Rich blacks anchor the frame, crisp whites resist blooming, and flesh tones remain natural and stable throughout. Luscious close-ups highlight Day's freckles, tan complexion, and golden locks, as well as Raitt's ruggedness and the fine facial features of all the various characters. 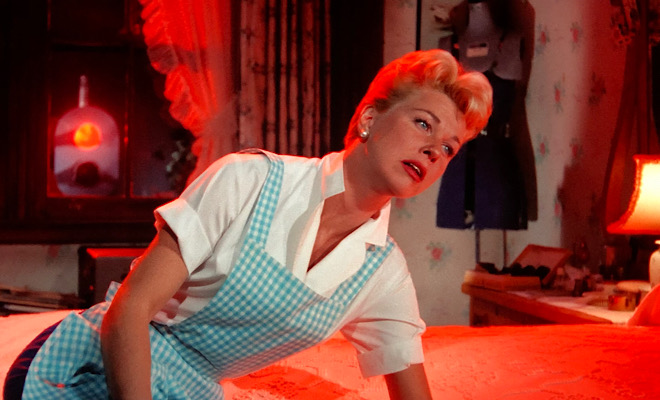 Background details are easy to discern, shadow delineation is quite good, crush never intrudes, and all of the nicks, blotches, or stray marks that plagued the 2005 DVD have been meticulously erased. Transitions are still a bit rough and a couple of semi-soft moments catch the eye, but those are the only minor hiccups that mar this beautiful transfer that fans of classic musicals, Hollywood's Golden Age, and the one-and-only Doris Day will hungrily lap up.

A musical like The Pajama Game cries out for bold, brassy, full-bodied sound, and while the DTS-HD Master Audio 2.0 mono track faithfully renders the film's soundtrack, it lacks the pizzazz, fidelity, and depth of tone we crave. The problem lies not with the disc (the 2005 DVD exhibits similar issues), but rather the original source, which sadly was not recorded in stereo and thus sounds a tad anemic, especially during the musical numbers. I kept raising the volume on my system, hoping to crystallize the tones and add a jolt of aural excitement to the track, but the tweaking didn't work. A nagging flatness remained; not enough to inhibit enjoyment of the excellent Richard Adler-Jerry Ross score that's impeccably sung by Day, Raitt, and company, but just enough to make me wonder how much a multi-channel or even a simple stereo treatment would improve the experience. (Interestingly, Mister Roberts, a comedy-drama produced by Warner a couple of years earlier, boasted multi-channel audio at the time of its release, but the studio did not afford the more deserving Pajama Game the same lavish treatment.)

Dullness notwithstanding, the track outputs clear, well-modulated sound. A wide dynamic scale handles all the highs and lows of the vocals and orchestrations without a hint of distortion, and some hefty bass rumbles the room when the freight train passes. Atmospherics like rain and the din of factory machinery are distinct but never overwhelming, and all the dialogue is clear and easy to comprehend. No age-related hiss, pops, or crackle sully the track, which doesn't quite meet expectations, but doesn't suffer from any glaring deficiencies.

Both notable extras from the 2005 DVD have been ported over to this Blu-ray release. Warner, however, has dropped the cast and crew listing and production notes.

Like a comfy pair of PJs, The Pajama Game is cozy entertainment filled with a host of sprightly tunes, a killer ballad, Bob Fosse choreography, and the always sunny Doris Day. This popular '50s musical seems a bit thin today, but remains a pleasant diversion, especially for fans of the genre and the film's leading lady. Warner Archive's fantastic new 4K remaster from the original camera negative yields an eye-popping transfer that's a huge step up from the previous DVD, and though the lossless mono audio track lacks pizzazz, it supplies clear, clean sound. The Pajama Game certainly isn't the finest screen adaptation of a hit Broadway musical, but it's energetic, romantic, and tuneful enough to provide some welcome steam heat during this cold, quarantined winter. Recommended.