Jolly old Saint Nick is still pretty old but he's a lot less jolly in Fatman. Mel Gibson steps into the big red suit as an everyman Santa down on his luck without a lot of Christmas spirit, on top of becoming the target of a bratty kid who hired the world's most lethal assassin played by Walton Goggins because of the lump of coal he got for Christmas. If you're in the mood for a pitch-black Christmas comedy, Fatman delivers some solid laughs while getting some great character performances from its cast. Paramount delivers Fatman to Blu-ray with a great A/V presentation and some decent extras including a rowdy commentary track. If you have a dark sense of humor this may be your new Christmas classic. Recommended.

Unless it's A Christmas Story and it's December 25th, I don't tend to watch Christmas movies more than once in a given year. They're very seasonal for me so I try not to tire of them too quickly. After getting to do an advance review for Fatman, I found I enjoyed Mel Gibson's version of Chris Kringle. The story was about as dark as a black comedy can get without going too far with it. After that one viewing, I was good for the season. So going into this review of the Blu-ray I was a little worried about how well it'd hold up a second time through inside a couple of months.

While it may not be as strong a viewing the second time out, the sense of familiarity was already pretty strong, the humor still hit. Filmmaker siblings Eshom Nelms and Ian Nelms's little holiday opus steadily builds offering small reveals of a world where Santa has always been real - even if not everyone 100% believes he exists. These moments still gave me the same laughs the first viewing offered. Even with the film's dark cynical sense of humor, there's still a healthy beating heart in the film. Marianne Jean-Baptiste is still a delight as Chris' better half. Walton Goggins is more or less being himself as the "Skinny Man" assassin but he leans into it often delivering some of the funniest bits without actually being a punchline-driven joke. And again, Mel is the man of the hour here. After a rough couple of decades personally and professionally it's nice to see him back in form again. With news that Lethal Weapon 5 is actually due to start filming in the spring, I'm excited to see his Martin Riggs with Danny Glover's Murtaugh back in action one last time.

Fatman certainly isn't for everyone. To put it one way, it's the Christmas movie 2020 deserves. It's dark, often brutal, and a lot of folks just aren't going to see the humor in it. But it was the kind of holiday movie I needed. Running on little sleep while raising a newborn cut off from the people or services that could help out - Fatman was the darkly comical balm I needed for a very long year. And it still made me laugh. As with any gag, the joke isn't as fresh the second time but the brand of humor this film offered was what I needed. 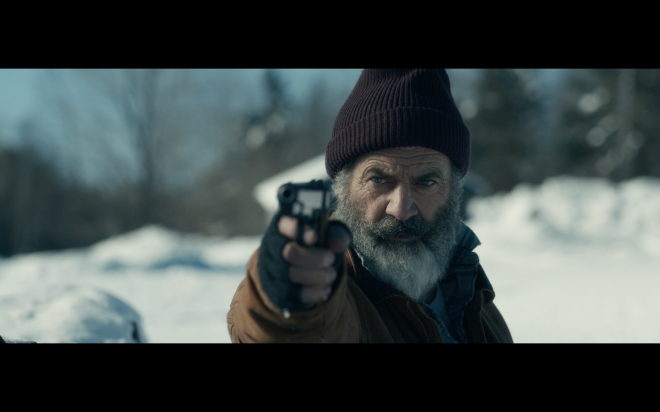 Check out my original Fatman Review

Fatman arrives on Blu-ray from Paramount Pictures in a single-disc Blu-ray + Digital release. Pressed on a BD-50 disc, the disc is housed in an eco-friendly case. My review copy didn't include a slipcover so I don't know if that packaging option is out there in the real world or not.  The disc loads to a static image main menu with traditional navigation options.

Getting to watch this in full 1080p without an intrusive watermark like the digital screener I reviewed was a real treat. This is a well-photographed movie offering a lot of great scenery and intimately nuanced cinematography. So it's great to fully appreciate it now. I'm not sure of the final scale of the Digital Intermediate, but during the audio commentary one of the directors clarifies to Mel Gibson they're looking at 4K. As this movie didn't muster up a large theatrical offering I understand a 4K UHD Blu-ray release not being in the cards, but this is a pretty-looking movie and it shows in every frame. Facial features are crisp and well-detailed. Costuming is intricate, even in subtle ways from Chris' Santa Suit down to the elves' uniforms. Colors are bold with lovely primary pop with nice warm tones invoking the gentlest of Holiday movies. Black levels are nice and deep giving some welcome image depth to the show. Contrast is spot on that even in the bright white locations of Chris' workshop the snow never blooms or becomes problematic. My only issue arrises with a couple of night shots where video noise creeps in. During the commentary track they do mention these couple scenes were hasty pickup shots since they knew they weren't going to come back to the location again, so that could be a contributing factor. All in all, this is a great looking image.

Fatman earns some Christmas cheer with a robust DTS-HD MA 5.1 audio mix. At first, this isn't the most aggressive track, keeping things mostly conversational and fairly front/center so you had to appreciate the small intricacies of the sound design. From Billy's warm and inviting home with the scurrying sounds of servants milling about to Chris's arctic snow-covered homestead, there are subtle details in the track to keep the surrounds active and engaged even if there's not a whole lot going on. Atmospherics are well established. Dialog is clean and clear throughout without issue. The score by Mondo Boys steadily builds from what sounds like a quintessential family movie into a full-throated action movie score. Imaging is well balanced throughout and levels are spot on.

Fatman comes with a nice package of bonus features to unravel. At the top of the pack is the great audio commentary featuring the writer/director Nelms brothers, Mel Gibson, Producer Michelle Lang, and director of Photography Johnny Derango. It's a lively and informative commentary without any dead space as someone always has something to offer. After that are some deleted and extended scenes. This movie originally ran nearly 20-minutes longer so it's nice to see the cut material. These are some interesting character beats but really it's understandable why they didn't make the final cut.

Fatman may not be the greatest new Christmas Classic to come around, but after a dark and rough 2020, it was the coal-black comedy I needed. The punchlines aren't always obvious but there are some creative uses of the Santa lore and legends to spice up this dreary action-comedy. Mel Gibson and Marianne Jean-Baptiste are delightful together. I'd actually love to see another movie with the pair together - maybe a sequel where they go on vacation and the pair has to save the world from impending doom during the offseason? I'd watch that!

Paramount Pictures delivers an all-around quality Blu-ray release for Fatman. On top of a solid A/V presentation, you get a welcome collection of worthwhile bonus features. The commentary track is a nice treat. If you love your holiday movies with a really dark sense of humor this should be on your list. I was very enthusiastic about this film the first time out, but I have a clearer sense that this isn't going to be for everyone so I'm slightly scaling back my overall ranking - Recommended. Still well worth checking out.