When a rich spoiled brat doesn't get what he wants for Christmas - he holds the one man responsible, Santa Clause! To get revenge for the lump of coal, the kid hires a hitman with his own score to settle with the man in the red coat. Starring Mel Gibson and Walton Goggins, the film is a pitch-black Christmas-time delight. The humor - with few exceptions - is dry as a desert and may not tickle everyone's funny bone, but the film is so ridiculous and impressively constructed by filmmaker siblings Eshom Nelms and Ian Nelms that the comedy shines through - along with a festive heart thanks to a terrific performance from Gibson and the rest of the cast. This film quickly became a new holiday season favorite. Highly Recommended. 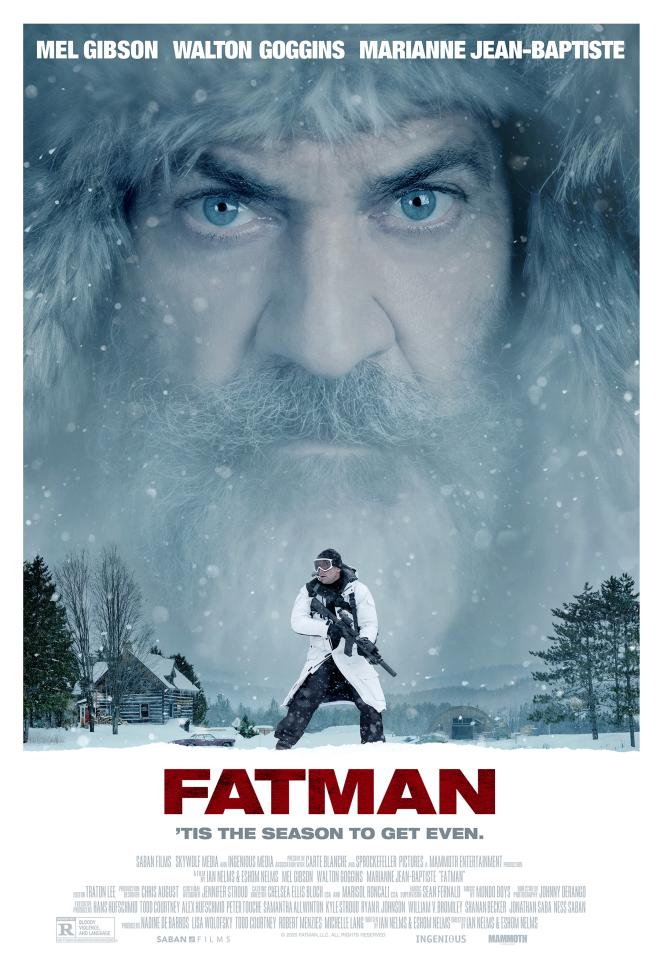 Spoiled and conniving Billy (Chance Hurstfield) gets what he wants whether or not he earns it. If he doesn't get it, his hired assassin (Walton Goggins) is paid to deliver the goods. When Billy only gets a lump of coal from Santa on Christmas morning, he wants the Fatman's beard. With Santa Clause as his new target, the assassin will travel to the far-flung reaches of the snow-covered north to claim his prize and exact his own personal vengeance. But what the assassin isn't ready for is the fact that Chris Kringle (Mel Gibson) didn't get the job as Santa because he was fat and jolly.

Christmas movies are a dime a dozen. Every studio and streaming network is out there trying to craft the next big hit that becomes an annual Christmas classic. Most of these movies are focused entirely on kids or are overwhelmingly "family-friendly." With very few exceptions, the adults in the room wanting festive entertainment strictly for them are left out in the cold. Fatman is in no way meant for the younger kids of the house. The first time you meet up with Mel Gibsons grizzled hard-drinking burnt out Chris, you get a clear idea of what this Santa is all about. By the time Billy has hired his go-to assassin to kidnap his school science fair rival to intimidate her into giving up her first place ribbon - it's cemented no kid under a respectable age should be seeing this Christmas-themed yarn. It's crass, violent, and at times bitterly unpleasant - but it's also darkly hilarious with genuine heartfelt moments of sincerity that makes the venture worthwhile.

What I love most about Fatman is the carefully constructed world this Santa yarn lives in. It's dark, cynical, and often jaded towards holiday cheer but it's tangible and everything is explained and not without hope. When we first meet Chris, we get the feeling he's just a regular barfly with a rough history and long stories to tell to the guy on the stool next to him. We start to wonder what kind of Santa is he? Is he the Santa with a sleigh, reindeer, and elves? Does he even have a workshop? It's how filmmaker siblings Eshom and Ian Nelms roll out the reveals that makes Fatman work. From the "Mrs. Clause" Ruth played by the always lovely Marianne Jean-Baptiste to head-Elf Seven played by Eric Woolfe that we learn a little more about this Santa and his holiday operations. And with each reveal it extends the darkly comedic nature of the film with some good chuckles and a few good genuine belly-full-of-jelly laughs.

And while this is a fantastical world, it still feels relatable. Because of falling Christmas Cheer and an ever-growing naughty list, Chris's livelihood is threatened and has to take an extra contract from the U.S. military to boost the subsidy check he gets every season for contributing to the global economy to keep his operation going. As the years have taken their toll, he's burnt out and doesn't believe he makes much of a difference - but he's not out of the fight yet.

While much of this sounds like a dour affair, there are some great gags and subtle jokes tossed in to remind you that you can laugh at the darkness. And if you can't laugh, turn to the people you love. Gibson and Jean-Baptists are a treat on-screen together with heartwarming chemistry. The pair play well as husband and wife who have occupied each other's company for an untold number of years, but just because of their familiarity doesn't mean there isn't any spice left in the holiday cider.

Performances are strong throughout this straight-faced coal-black comedy. Chance Hurstfield is a hoot as the diabolical Billy who plays this Santa's child nemesis like a Mafia Don in training. Walton Goggins shines as the assassin bringing his customary swagger but with a toned-down earnestness of a man who grew up wishing he could still be a child. As previously mentioned, Marianne Jean-Baptiste is a heartwarming delight. Her Ruth is quick with the sage advice but offers some of the funnier jokes to keep things even-keeled. Then we have Mel - who has always delivered great performances, but of his last few roles, I think this is some of his best work in front of the camera in a decade. He slips into the gruff and grumpy persona that he cultivated in the 80s and 90s, but the heart and humor return with ease.

When Ruth gives Chris a file of all the kids he helped inspire to become happy successful adults because he gave them the toy they always wanted, it was a true "Ahhh…" moment. There's the Mel we all loved so much and haven't really seen in what feels like a long time. You can't really call this a comeback performance since he never really left the movies - Dragged Across Concrete is a great turn and Hacksaw Ridge a phenomenal war film for Gibson as a Director - but his Chris Kringle is a welcome return to classic "Mel" form.

I'm not sure Fatman will light everyone's tree this holiday season, but it was the kind of darkly comical movie I needed. As a new father stuck raising a child in the middle of a pandemic on little to no sleep during a contentious election season, it's easy to get hung up on all of the unpleasantness you see around you. With some smart direction, witty screenwriting, and some entertaining performances, Fatman is the soothing pine-scented balm to remind you it's okay to let bygones be bygones, hug the ones love, laugh when you need to, and yes - even get excited for the holiday season while Mel Gibson and Walton Goggins square off in a bullet-fueled shootout. 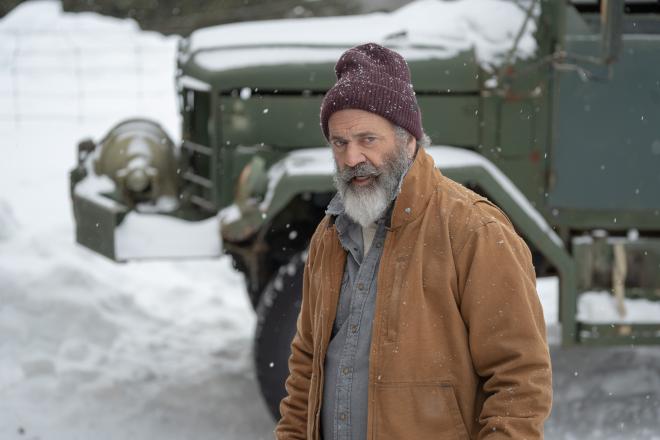 Dark, cynical, and hilarious - Fatman was an unexpected holiday joy. From the trailer, it feels as if the film was a one-joke pony but this show has a lot in store for its audience. It's not dark for the sake of darkness, it's not crass just to hear Santa swear a time or two. Fatman offers a lot of heart and holiday cheer and turns out to be the perfect antidote for a tough year full of stress and anxiety. Certainly not age-appropriate for everyone at home this year, but for those up to the task, there's grand entertainment value to be enjoyed. Highly Recommended.