In a decade rife with paranoid thrillers Alan J. Pacula contributed three of the best in the sub-genre.1974’s The Parallax View starring Warren Beatty, Hume Cronyn, and Paula Prentiss is a relentless conspiracy theory-laden thriller that presses the audience into the uncomfortable position of questioning everything they see on the screen. This classic finally makes its Blu-ray debut thanks to the Criterion Collection with an excellent newly restored transfer, audio, and a host of worthwhile bonus features. Highly Recommended

“It is our further conclusion that he acted entirely alone, motivated by a misguided sense of patriotism and a psychotic desire for public recognition.”

Three years ago on July 4th, an idealist senator was rising in the ranks becoming the face of the party - and a movement for peace and prosperity. During a celebration at Seattle’s famous Space Needle, he was gunned down seemingly at random by a lone nut. Now, with numerous witnesses dead including a former lover, reporter Joe Frady (Warren Beatty) is trying to sort out the pieces of the puzzle. But whenever he thinks he’s figured out the picture, it changes leading him further down a dark and deadly path.

Parallax by definition means you can’t always trust what you see. It’s that space between your right and left eyes. Close one eye and the image changes. Open the other and the image changes again. Just because you’re looking at something one way, doesn’t mean it’s true. Or by extension, what you assume to be a lie can’t actually be the truth. I’ve never been one to go into conspiracy theories beyond cursory examinations for fun. A good book or podcast about the JFK assassination or the identity of Jack the Ripper is always a fun way to waste time, but I’ve never gone full-tilt boogie into that realm. Conspiracies can make for great cinema - as Pakula demonstrates with The Parallax View and All The President’s Men - but they’re a dangerous hobby when you get deep into stuff like Q and lose all focus on reality.

That’s the position Beatty’s Joe finds himself - and by extension the audience - in. In life and in movies when presented with information we tend to take things at face value. Or if the material is exciting and gets the blood pumping, we dig deeper and deeper looking for more “truth.” We suddenly become amateur detectives and believe we’re the only ones who can solve the mystery. That’s why conspiracies are so damn enthralling and consuming. But we also can be blinded from a more important truth that’s staring us right in the face. Klute was a frightening descent into voyeurism. Someone was always watching. It could have been the hero - or the killer. All The President’s Men made you feel like Richard Nixon was personally standing behind you at every turn in the film even though he never makes a real appearance in that film.

The Parallax View makes you question every shot in the film. Our brains want to make some sort of linear line with Joe and the story and the corporate conspiracy of the Parallax Corporation to the point we’re blinded from seeing the reality.

And that’s what I love about this movie, you can’t trust a damn thing you see in it. When you think there’s a conspiracy, there isn’t. When there is a conspiracy, you don’t see it. And then you have a number of shots and angles and audio cues designed specifically to keep you on your toes but are in all likelihood just a bunch of bunk. This is a movie I give myself a headache trying to figure out. There are stretches where the film is frightfully thrilling, and there are moments where it’s frustratingly dull, making you think nothing is going on. Just when you think something is going to happen - nothing does. The climax of the film is a classic example of tactical misdirection; every edit throws you off making you guess when and how something might happen. 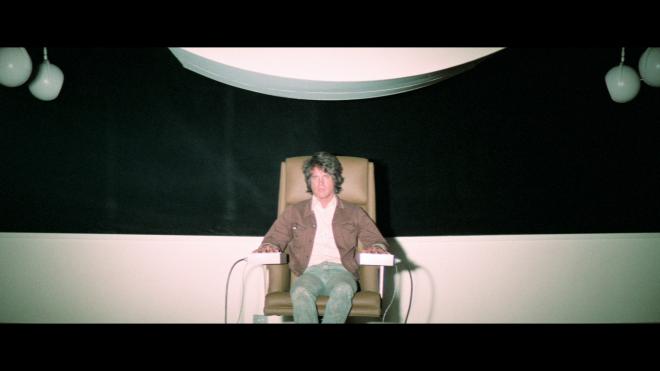 The Parallax View is the kind of movie that I love to revisit again and again. I love a movie that messes with you and keeps you guessing but also makes you question everything you’re looking at. Each time I see it I feel like I’m getting a fresh experience even though I know the outcome. I get fixated on little things here and there that make the film feel different because it changes my perception of events. You always have to question what you’re seeing, why you’re being shown this scene this way, but most importantly - what are you not seeing?

The Criterion Collection finally delivers one of the most sought after titles from the 70s to Blu-ray in a single-disc release. Pressed on a BD-50 disc, the disc is housed in Criterion’s standard clear case with spine number 1064 with a booklet containing the essay Dark Towers by Nathan Heller. The disc loads to a static image main menu with Criterion’s traditional navigation menu structure.

Making its first run on Blu-ray, this 1080p 2.39:1 transfer was sourced from a fresh new 4K restoration. The last time I watched this movie was years ago on DVD and this is a clean and clear improvement over that old barebones disc. Part of what makes this film an engrossing watch is the small details and everything is on full display here. I felt like I was seeing little notices in newspapers clearer, items in the production design that serve as little clues I’d never picked up on. Film grain is intact, it may be heavy for some folks out there but it’s a natural look for Gordon Willis’ films and this is a rich film-like presentation.

Colors are bold even with that golden 70s color pallet with a lot of tans and browns everywhere. Reds, Blues, and bold yellows really pop. The final scene with the students and their red, white, and blue placards is some gorgeous stuff. Black levels are deep and inky and whites are crisp. There’s still some blooming that’s always been there, but compared to the old DVD it’s much more under control and less washed out. With the restoration, the elements are in terrific shape without any signs of wear and tear. This transfer is right up there with Criterion’s Klute for another excellent classic 70s release.

The Parallax View enjoys a terrific LPCM 1.0 audio track. The track is clean and clear allowing for dialog to hold the mix with scoring and sound effects filling the stage. Even though a mono presentation, there’s a rich sense of atmosphere and directionality. Again, pointing at the climax where there’s a band, numerous people, and gunshots there’s a terrific spacious quality like you’re trapped in a near-empty convention hall. There are moments where it can be difficult to hear dialog or exchanges are overpowered by what sounds like disorientating whispers, but that’s all part of the show. Free of hiss, pops or any age-related issues, this is a terrific mix.

As much as I love the Criterion Collection and the work they do, I gotta say that lately, they’ve been falling off their game with bonus features. We rarely get any new commentaries and most extra features are archival or very dated. What’s here is alright, but not amazing. The new Jon Boorstin interview discussing the creation of the psychological test is a cool new feature - I just wish there were more pieces like that. The new Alex Cox introduction is a nice piece as well, but it feels separate from the film itself and could be attributed to any general sense of conspiracy theory movies.

The Parallax View is classic 70s paranoia cinema ratcheted up to a near-uncomfortable degree. As we watch our here played by Warren Beatty, we try to structure the film and have it make sense by the end, but Alan J. Pakula just won’t let it live that way. I know people who hate this movie because it’s never laid bare and distinctly spelled out. But that’s why I love it. I love that I can watch a movie five times and come away from it differently each time I watch it.

The Criterion Collection finally gives this film the life it’s needed on Blu-ray with an excellent A/V presentation that easily bests any previous home video release. The film simply looks and sounds better than ever. The bonus features are decent enough, but I have to admit some measure of disappointment in that arena. I’d have loved a Beatty interview or commentary track. To finally have this film on Blu-ray is a treat and absolutely should take up the necessary shelf space in your collection. Highly Recommended