Alan J. Pakula's Klute at long last make's its way to Blu-ray courtesy of The Criterion Collection. Starring Jane Fonda in an Oscar-winning career-defining role alongside a cool and steely Donald Sutherland, the film showcases the seedy side of New York's sex trade against the backdrop of a serial killer thriller. The film is a classic in the genre taking its time to build suspense and an ever-looming sense of paranoia. Brought to life with a new 4K restoration, the film has never looked or sounded better and comes packed with some worthwhile bonus features true to Criterion form. Highly Recommended

By day Bree Daniels (Jane Fonda) struggles to land acting gigs. By night, she's a high-class call girl turning tricks. Desperate to get out of the life, she can't forget a trick-gone-wrong. Obscene letters, late-night phone calls, and the feeling that she's constantly being watched plague her. Now small-town detective John Klute (Donald Sutherland) is at her door looking for his missing friend - who may possibly be the demented man stalking her. 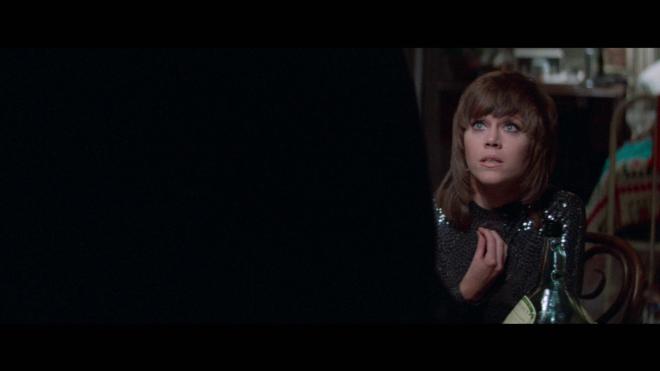 I've got a lot of reasons to love Klute. It's a pitch-perfect thriller that painstakingly takes the time set up the world it inhabits. Director Alan J. Pakula had the confidence in his cast - in particular, Jane Fonda - to throw out the scripted dialogue and let them be their characters. Cinematographer Gordon Willis use of dark lighting, distant camera shots, as well as Pakula's penchant for long takes, gives the film an eerie feeling that someone is always watching. The use of recordings of our most intimate moments being used against us is just as relevant today as it was then. It's a film that slowly builds and bubbles up to a heart-pounding climax.

While I love this movie for all of those reasons, Klute has a special place in my heart because it was one of the first movies my wife showed me when we first started dating. For one thing, it was a Pakula movie I somehow was completely unaware of having seen virtually everything else he'd made. For another, it was proof my wife was a cool person and had a great taste in movies! I just ate this one up. I can't hear the Michael Small score without getting instantly creeped out.

As this is a family favorite, I'm grateful that the Criterion Collection added Klute to their ranks. I was getting tired of running through my LaserDisc. The DVD was pretty rough, to say the least. Now we can finally get to see and enjoy the film. I already had an appreciation of the film's frequent use of long takes, but I was keenly aware of it this time as we get to see Fonda and Sutherland work through an entire range of emotions within a single scene.

One of the most heartwarming moments of this otherwise chilling film is when the pair have just established a romantic relationship and they go out for groceries. They're at a fruit stand picking things up, and smelling them, and it becomes clear that this is the first time Bree has been treated with respect as a woman and a human being. It's a thing we all do, but for her, it's a new feeling and the pair carry the scene together perfectly. There are other great moments like that throughout Klute - but this time around that was the scene that struck me most.

Klute is the sort of thriller the likes of Wait Until Dark where I always want to watch it - but I don't want to watch it too often. I can't remember how many times I've seen this movie over the last 12 years. There aren't any plot surprises any more but it's still eery, engrossing and effective. It gets under your skin and stays there. It doesn't go overly graphic, it's not an "exposé" movie, but it doesn't pull punches either. Like Pakula's All The President's Men and The Parallax View, Klute is a hell of a flick that makes the most with simple storytelling, pacing, human characters, and lingering imagery. If you haven't seen it, you should make the time for it ASAP.

Klute creeps its way onto Blu-ray thanks to the Criterion Collection in a single disc set. Pressed on a Region A BD-50 disc, the disc is housed in a standard clear Criterion case with spine number 987. Also included is a booklet with a terrific essay by Mark Harris as well as excerpts from a 1972 interview with Pakula. The disc loads to a static image main menu with Criterion's traditional navigation menu. 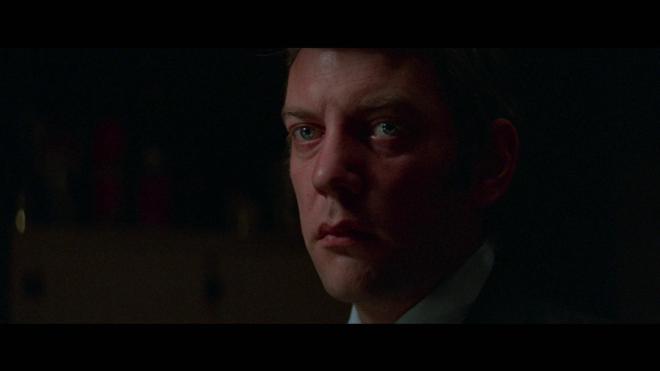 Minted from a fresh 4K Restoration effort supervised by camera operator Michael Chapman, this truly is the best I could have hoped for Klute. This is a dark and gritty film and this 2.39:1 1080p transfer beautifully maintains this visual aesthetic while offering terrific upgrades in detail and color. Film grain is your best friend with this movie. Like Gordon Willis' other efforts such as The Godfather, The Paper Chase, and Annie Hall - this is a movie that loves its deep dark black corners with an organic grain appearance. If you're a fan of "scrubbed" imagery, you won't find it here - but that isn't to say the image is overly noisy either. It's a beautifully film-like appearance.

Details are vivid as well allowing you to see fine facial features, the impressive production design of Klute's stark apartment and Bree's messy existence. It's especially noteworthy for the fashion of the times and Fonda has quite the range of outfits - or the lack of in some cases. Colors are also nicely rendered giving blues and reds plenty of pop. When they go visit Bree's former pimp Frankie (a delightfully sleazy Roy Scheider), you get a full range of 70s-era disco-centric colors and lights. As a richly urban New York film, it's a nice visual counterpart to Midnight Cowboy.

Black levels and contrast are also in great shape. Blacks are thick and inky allowing shadows to creep into the scene. Whites are also crisp and bright without blooming. This is especially important to the climax where it's simply black figures against a blown-out white window. Again all in long takes so if the whites and blacks weren't pitch perfect it'd lose itself. Depth is also nicely appreciated. It gives you a great sense of scale and dimension as the film moves from cramped interiors to open streets but never losing a sense of claustrophobia. I can now retire my LaserDisc as this was honestly better than I could have hoped for. 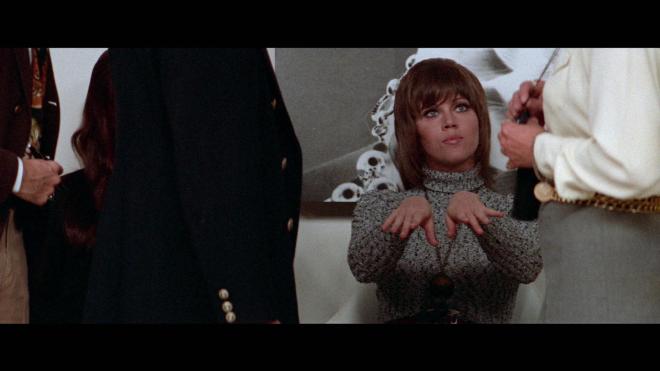 I'm glad to hear that Criterion kept to the LPCM 1.0 Mono mix without feeling the need to upsample it to stereo or fake a 5.1 mix. This is a tightly arranged soundscape that hinges on single sound elements dominating the soundscape. It's an intense audio mix that relies on small sounds and the eerie Michael Small score to enhance that sense of dread. That said, even with the narrow single channel, there is a notable sense of distinct atmosphere throughout the film. Dialogue is clean and clear throughout - I particularly loved how much more clean but distinct the killer's audio recordings are. Made them even more impactful. I've got to mention the Michael Small score again. It's one that I love but I just can't listen to as it's just too unnerving. It's on Spotify if you want to give it a go - good luck! All around this is a clean and clear audio mix that perfectly captures the film. 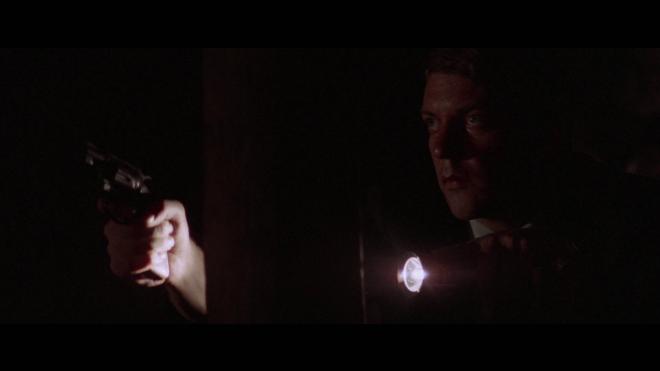 Bonus features are true to Criterion's best efforts. There may not be a ton of bonus features, but they're all high-quality efforts giving you a lot of great insight into the making of the film. The interview between Illeana Douglas and Jane Fonda is the big highlight as it covers a lot of ground of how she got cast for the part and the research she did to prepare. The Mark Harris essay in the booklet is also a great read. 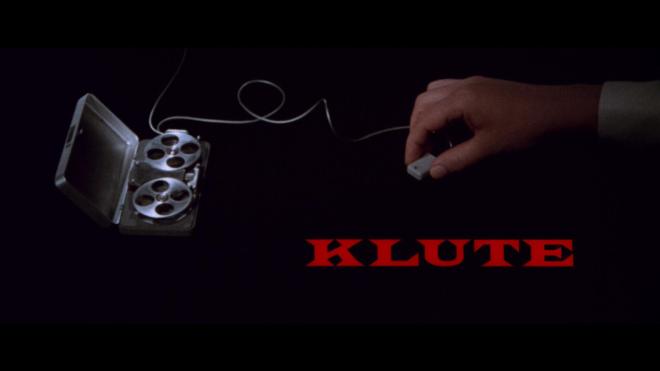 If you love tight character-driven suspense thrillers, it doesn't get much better than Alan J. Pakula's Klute. This film started Pakula's intense little trilogy of paranoia films with All The President's Men and The Parallax View in quick succession. Klute aims for shocks but never loses sight of its characters showing them at their most human and vulnerable. It's a beautiful looking film that makes great use of light and darkness and the creepy shadows in between.

The Criterion Collection gives Klute the treatment it's long deserved. Featuring a fresh new 4K restoration, the film has never looked better while retaining its trademark grittiness. The sound design is first-rate as the film relies on creepy sounds and music to get under your skin. To top it off, the bonus features offer a great look at the making of the film featuring a fine collection of new and archival bonus features. If you're a fan of the film - or even if you've never seen it - this Criterion Collection release is one to keep on your radar! Highly Recommended.

Sale Price 27.99
List Price 39.95
Buy Now
3rd Party 21
In Stock.
See what people are saying about this story or others
See Comments in Forum
Previous Next
Pre-Orders
Tomorrow's latest releases