Some movies address themes so potent and depict situations so shocking, they make indelible impressions and remain relevant forever. The Mortal Storm is one such film. Director Frank Borzage's searing adaptation of Phyllis Bottome's novel about the rise of fascism and transformation of German society following Adolf Hitler's ascension to power shows just how quickly a nation can be brainwashed by a subversive ideology and just how dangerous the resulting consequences can be.

Produced shortly after the dawn of World War II, but before America joined the Allied effort, The Mortal Storm doesn't sugarcoat the Nazi threat. On the contrary, it paints a chilling portrait of a country all too willing to follow the bigoted rhetoric and authoritarian values of an unstable, hateful demagogue. Never before had a Hollywood film so blatantly denounced Hitler's regime or issued such a profound warning against its principles...and the Führer himself took notice. Hitler not only banned The Mortal Storm in Germany upon its release, he also banned all the product from the studio that made it (MGM) for the duration of the war.

The story begins on January 30, 1933, the day President Paul von Hindenburg names Hitler Chancellor of Germany. The news, which is greeted by some with excitement and by others with dread, interrupts the 60th birthday celebration of respected science professor Victor Roth (Frank Morgan), who is surrounded by his wife Emilia (Irene Rich), daughter Freya (Margaret Sullavan), son Rudi (Gene Reynolds), and stepsons Otto (Robert Stack) and Erich (William T. Orr). During the festive dinner, Freya's blustery boyfriend Fritz Marburg (Robert Young) announces their engagement (much to her surprise), thus dashing the hopes of the more subdued and sensitive Martin Breitner (James Stewart), who also pines for Freya and seems better suited to her. 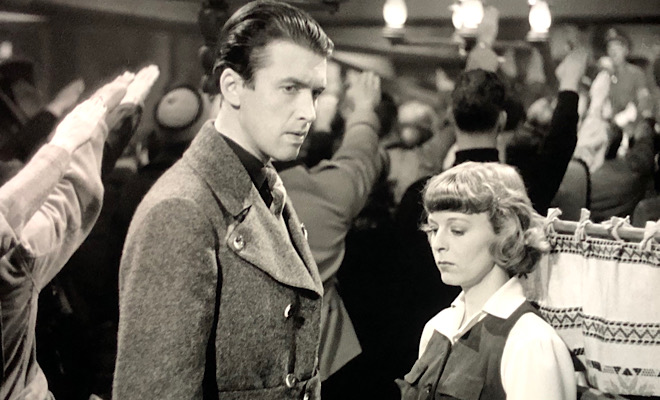 Almost immediately, Hitler's culture of uniformity, blind allegiance, and intolerance sweeps the country, and his rabid disciples bully and threaten anyone who doesn't adopt its dogma. Jews are persecuted and Professor Roth is targeted because he favors scientific fact over racist fiction. Otto, Erich, and especially Fritz embrace Hitler's ideology and surrender themselves to a growing authoritarian movement fueled by aggression, force, and fear. A horrified Freya witnesses Fritz's disturbing transformation and recoils from him. Scared and confused, she finds solace with Martin, a fellow resistor who risks his own safety by standing up to Nazi thugs and aiding his persecuted comrades.

As Hitler's strangulating grip on German citizens tightens with frightening alacrity, the ensuing reign of terror rips apart the Roth family, jeopardizes their safety, and threatens Freya's burgeoning love for and hopeful future with Martin.

Like many of its characters, The Mortal Storm isn't afraid to call a spade a spade and denounce Hitler's immoral principles. Such audacity is admirable and noteworthy, especially when one considers Hollywood's long-standing reluctance to alienate lucrative foreign markets and risk revenue loss. America may have been neutral in 1940, but Borzage's film takes a stand and undoubtedly opened the eyes of many U.S. citizens who up to that point didn't fully grasp the dire nature and complete breadth of Hitler's policies and influence. To audiences of the day, The Mortal Storm was surely scary stuff. And it's still scary today. 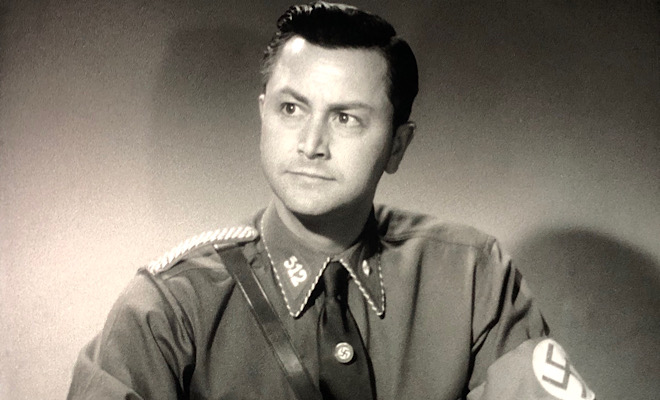 With all the factions and fringe groups currently vying for oxygen in our country and all the political divisiveness pitting us against each other, some of the behavior depicted in The Mortal Storm looks as if it could have been ripped from today's headlines. Sure, what went on in Germany in the 1930s and '40s was far more extreme, but The Mortal Storm remains timeless because it's a cautionary testament to what can happen when subversive views become mainstream and spiral out of control.

It's a tender love story, too, and a deeply affecting chronicle of defiance, bravery, resilience, and faith. Produced a couple of years before wartime propaganda films flooded American theaters, The Mortal Storm - despite an inspirational prologue and epilogue - lacks the preachy tone and patriotic fervor that would define that mini-genre. Earnestness predominates instead, as well as an overriding commitment to exposing the insidious, reprehensible methodology of a madman.

Borzage, who won the very first Best Director Oscar for 1927's 7th Heaven and a second one for 1931's Bad Girl, deftly juxtaposes the deep emotional bonds of family against devastating acts of bigotry. Both ends of the spectrum ring true, but the unsettling episodes of oppressive behavior brim with power because of their simplicity and universal nature. They may be happening in Nazi Germany in the film, but they could happen - and do happen - anywhere in the world. That's what's frightening. The violence may not be graphic, but the calculated cruelty behind it pierces the soul and makes one ashamed of the human race. 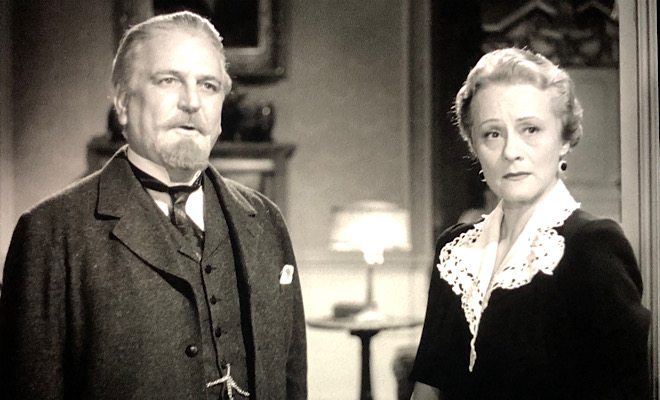 The Mortal Storm would mark the fourth and final pairing of Sullavan and Stewart, who earlier in the year appeared in arguably their best loved movie, Ernst Lubitsch's charming The Shop Around the Corner. Their palpable chemistry adds an authentic air to their on-screen romance, while their understated acting styles heighten the impact of their respective characters' actions. Both seem fully invested in the material, and their commitment and passion draw us in.

Morgan, who also appeared in The Shop Around the Corner, makes the most of his serious role, filing a nuanced portrayal that's far removed from the befuddled comedic parts he usually played. He also shares some lovely scenes with Rich, who wonderfully embodies the long-suffering, emotionally torn family matriarch. Young is especially effective as the Nazi rabble-rouser who comes to love the Fatherland more than Freya, and Dan Dailey (billed here as Dan Dailey, Jr.) is downright despicable in his first credited role as a vicious and vociferous Nazi hoodlum. The 21-year-old Stack makes a solid impression in only his second film, and Bonita Granville, Maria Ouspenskaya, and Ward Bond (improbably cast as a German officer) contribute stellar work.

History often repeats itself, and that's why we can never dismiss The Mortal Storm as a portrait of a bygone era or minimize its disturbing themes. Until we vanquish hate and cleanse the planet of authoritarian rule, this beautifully crafted, literate, well-acted, suspenseful, and occasionally sickening film stands as a reminder of how precious freedom is and how easily it can slip through our collective fingers. The potent messages The Mortal Storm transmits can't be repeated often enough and need to be regularly digested and heeded. 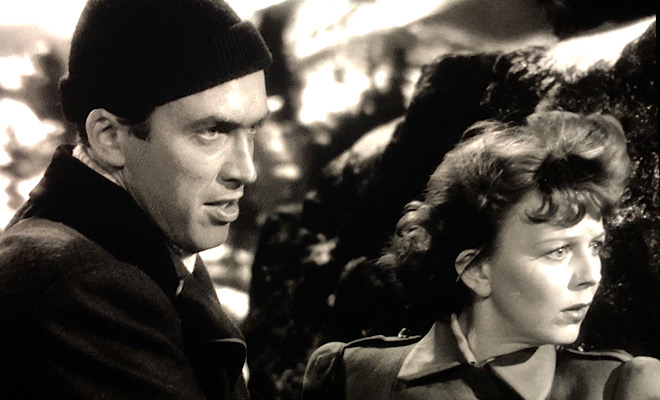 The Mortal Storm arrives on Blu-ray packaged in a standard case. Video codec is 1080p/AVC MPEG-4 and audio is DTS-HD Master Audio 2.0 mono. Once the disc is inserted into the player, the static menu without music immediately pops up; no previews or promos precede it.

A brand new 4K restoration from the best surviving elements yields a lovely 1080p/AVC MPEG-4 transfer that fully immerses us in this disturbing drama. Excellent contrast and clarity bring the picture to life and a natural grain structure maintains the feel of celluloid. Rich black levels, bright, well-defined whites, and nicely varied grays produce a contoured image that features good shadow delineation and a fair amount of depth. Background details are easy to discern, costume textures come alive, and the typically glamorous MGM closeups flatter all the actors.

On the downside, the marvelous sharpness enhances the artificiality of the miniatures and painted backdrops employed sporadically during the film. A few faint nicks also crop up here and there, but those are minor quibbles. Never has The Mortal Storm looked so fresh and vibrant, and this transfer is a joy to behold.

No major issues impede the performance of the DTS-HD Master Audio 2.0 mono track. Any age-related hiss, pops, or crackle have been erased, dialogue is well prioritized and easy to understand, and a wide dynamic scale handles all the highs and lows of the music score without any distortion. Sonic accents and atmospherics are crisp, and all the aural elements combine to create a pleasing, vibrant track.

A chilling, deeply disturbing portrait of the rise of Naziism in pre-World War II Germany, The Mortal Storm still packs a potent punch 80 years later. Director Frank Borzage's riveting film depicts bigotry, bullying, and cultish behavior with surprising brashness and examines the insidious nature and devastating effects of such radical ideology within the context of one divided family. Margaret Sullavan, James Stewart, and Robert Young lead a strong cast and Warner Archive's high-quality Blu-ray presentation, distinguished by a brand new 4K restoration, solid audio, and a couple of vintage supplements, brings this sober drama to life like never before. In our current day and age, The Mortal Storm remains sadly relevant, and it comes very highly recommended.