So Evil My Love

If you think Barbara Stanwyck, Lana Turner, and Joan Bennett are film noir's nastiest femme fatales, then you haven't seen Ann Todd in So Evil My Love. As a naive missionary's widow who's transformed into an unscrupulous blackmailer by an opportunistic, manipulative, and oh-so-sinister ne'er-do-well (Ray Milland), Todd files an ice-cold portrayal in director Lewis Allen's slow-burn Gothic thriller. Kino's video and audio transfers lack the sparkle of many of the studio's other classic releases, but if you're a fan of psychological melodramas laced with shadowy noir accents, then this twisty tale of greed, betrayal, and murder is definitely worth a look.

Most film noirs feature villains we love to hate. Whether they're rotten-to-the-core femme fatales Iike Barbara Stanwyck's Phyllis Dietrichson in Double Indemnity or sadistic hitmen like Richard Widmark's giggly Tommy Udo in Kiss of Death, the genre's heavies are usually colorful, sexy, or disturbed enough to strike our collective fancy. Not so in the gothic noir So Evil My Love, a 1948 American-British co-production that hardly contains a single likable or redeemable character. Everyone in this shadowy tale of greed, manipulation, blackmail, and murder is so diabolical, opportunistic, self-centered, and ruthless, it's difficult to find anyone to root for or sympathize with, and that includes the film's attractive trio of stars.

Ray Milland, Ann Todd, and Geraldine Fitzgerald headline director Lewis Allen's well-made, but occasionally plodding adaptation of a novel based on the notorious demise of real-life English barrister Charles Bravo. The respected and wealthy nobleman died from a lethal dose of poison under mysterious circumstances in 1876, and though numerous theories swirl about the grisly incident, the case remains unsolved. So Evil My Love's clever treatment of it lacks any ambiguity, but its elegant and effective presentation constitutes the high point of an otherwise brooding tale that's noteworthy mostly for its supreme nastiness.

Olivia Harwood (Todd), the prim, repressed, but not especially pious widow of a recently deceased missionary, is returning to Victorian England after a lengthy posting in Jamaica. On board the ship, she nurses back to health malaria patient Mark Bellis (Milland), a dashing yet cryptic man who appears to have a corrupt past. The roguish Mark, an art thief and forger who's also embroiled in a torrid affair with sassy tart Kitty Feathers (Moira Lister), calls on the unsuspecting Olivia in her modest London flat, and the lonely, naive woman quickly succumbs to his charms. Greed consumes Mark, and he woos Olivia for the sole purpose of reeling her into in his self-serving schemes. 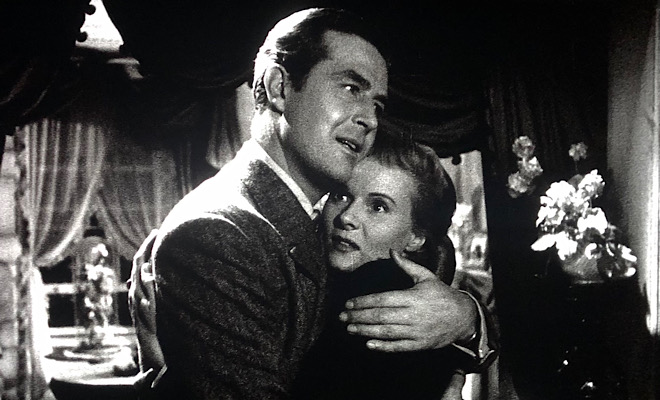 Mark believes his ticket to easy street lies within the grandiose manor of Henry Courtney (Raymond Huntley), a pompous lawyer who's married to the simpering Susan (Fitzgerald), a school chum of Olivia's. Mark persuades Olivia to rekindle her friendship with Susan so they can begin swindling the unbalanced woman and blackmailing her cold, cruel, and abusive husband. Their best-laid plans, however, soon go awry, and the resulting carnage upends and destroys everyone's lives.

So Evil My Love is the kind of film that seems to follow a tried-and-true blueprint, but just when we're on the brink of dismissing it as a pale imitation of something else, it takes a surprising turn. The detour here leaves a decidedly unpleasant aftertaste, but Allen, one of Hollywood's lesser known directors, seems to relish tackling subversive themes. (His previous film, the cult classic Desert Fury, is one of my favorite guilty pleasures.) Mark's manipulations are de rigueur for the gothic mystery genre, but we foolishly expect the sheltered, guileless Olivia will become just one more whimpering victim crushed by his domination a la Ingrid Bergman in Gaslight. What we get in Olivia instead is an all-too-willing partner in crime, a Frankenstein's monster who delights in performing dastardly deeds and whose nefarious nature ends up eclipsing that of her smug Svengali. That's the clever noir angle that piques our interest, elevates the film, and makes this devious tale worthy of repeat viewings.

Allen's debut feature, The Uninvited (also starring Milland), stands as one of cinema's finest ghost stories, and the same creepy air of foreboding that distinguishes that movie pervades So Evil My Love as well. Though the story takes its time shifting into high gear and then sputters a bit on its way to its thrilling climax, the film's top-notch production values, gloomy cinematography, and persistent aura of dread keep us engaged, as do the excellent performances by the accomplished British cast. 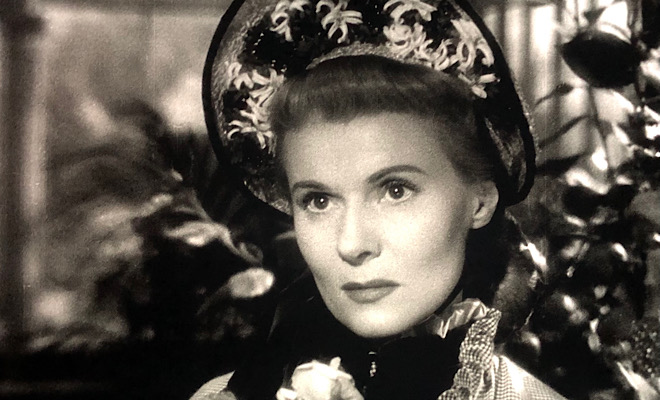 Milland made his name as a debonair leading man, but after winning a well-deserved Best Actor Oscar for his raw portrayal of a spiraling alcoholic in Billy Wilder's The Lost Weekend, he began choosing more demanding roles that allowed him play against type. Mark Bellis is one such part, and Milland expertly uses his trademark urbanity to advance Mark's sinister agenda. Olivia may be fooled, but the audience is on to him from the beginning, and that knowledge creates a delicious tension that sustains the movie when the narrative periodically stalls.

Todd, one of Britain's finest Golden Age actresses, crafts a frosty yet burning portrayal of a complex, largely reprehensible character. Without apology or trying to engender any sympathy whatsoever, Todd puts Olivia through her distasteful paces as we ponder how a supposed woman of faith could evolve so quickly into a heartless, duplicitous crook and take such ghoulish pleasure in bilking a dear and trusting friend. Olivia's inability - or refusal - to see through Mark's all-too-obvious machinations is a bit hard to swallow (can love really be that blind?), but we just have to accept that story flaw. Nevertheless, Todd's icy glares pierce through the screen, and her finely etched portrait of Olivia, who becomes strangely empowered and emancipated by breaking the law, remains riveting and powerful more than 70 years later.

Fitzgerald does what she can with a largely one-dimensional role and Leo G. Carroll perks up a few scenes as a probing private detective. Sadly, though, Great Expectations alums Martita Hunt (Miss Havisham) and especially Finlay Currie (Magwitch), who disappears after the opening scene, are wasted in small, insignificant parts.

While the screenplay can be talky at times, it slowly crescendos to a stirring, surprisingly satisfying ending that's reminiscent of grand opera. If executed well, a breathtaking coda can redeem almost any movie, and this one wields just enough impact to keep So Evil My Love swirling around our brain after the closing credits roll. Allen's film may not rank among the finest noirs or gothic thrillers, but enough ice water runs through its veins to cast a chilling spell. 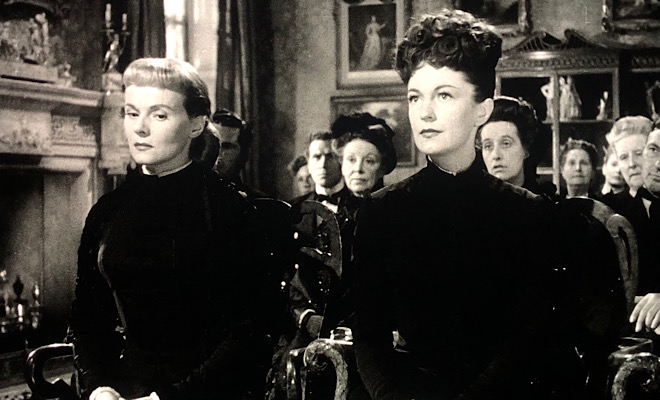 So Evil My Love arrives on Blu-ray packaged in a standard case. Video codec is 1080p/AVC MPEG-4 and audio is DTS-HD Master Audio 2.0 mono. Once the disc is inserted into the player, the static menu with music immediately pops up; no previews or promos precede it.

The packaging advertises a brand new 2K master, but the lack of any cleanup dulls the impact of this otherwise attractive 1080p/AVC MPEG-4 transfer. Though contrast and clarity are quite good and the rendering faithfully honors the film's noirish photography, an abundance of wear-and-tear on the print often grabs attention. The nicks, marks, and vertical lines may be faint, but they're also persistent, and combined with some occasional soft, grainy shots that may or may not come from a different source, the overall effect is disappointing. The  film-like image features deep, lush blacks that often emphasize the sinister mood, as well as crisp whites and nicely varied grays. While shadow delineation is largely excellent, some crush does creep in from time to time during nocturnal scenes, but never to a disturbing degree. Background details are easy to discern, costume fabrics are life-like, and sharp close-ups highlight Todd's icy demeanor and Milland's roving eyes. This effort certainly doesn't rank among Kino's best classic movie transfers, but it's watchable despite the myriad imperfections.

The DTS-HD Master Audio 2.0 mono track provides clear, well-modulated sound, but lacks any wow factor to distinguish it. The music score by William Alwyn sounds rich and full, all the dialogue is clear and easy to comprehend, and no distortion intrudes. Though some faint surface noise can be detected, the track is largely free of such age-related issues as hiss, pops, and crackles. Atmospherics and subtleties nicely shade the audio and the few sonic accents that punctuate the track are bold and distinct.

In addition to the film's two-minute original theatrical trailer, as well as a few previews for other Kino releases, the only supplement is a typically insightful audio commentary by critic and historian Imogene Sara Smith. Smith discusses the phenomenon of gaslight melodramas during the 1940s, notes the shift in Milland's persona following World War II, shares some salacious details regarding Geraldine Fitzgerald's personal life, and chronicles the real-life murder case upon the film is based. She also analyzes the similarities between German Expressionism and film noir, praises British cinema and talks about its codependent relationship with Hollywood, and provides bios and credits for key members of the cast and crew. Despite her scripted delivery, Smith is one of the best film analysts in the home video realm, and her commentary for So Evil My Love is definitely worth checking out.

One of the nastiest film noirs to come out of cinema's Golden Age, So Evil My Love tells its distasteful story of greed, manipulation, obsessive love, infidelity, blackmail, and murder with uncommon relish. Plenty of Victorian atmosphere and an array of fine performances from a top-notch British cast that includes Ray Milland, Ann Todd, and Geraldine Fitzgerald distinguish this Gothic, slow-burn thriller. So Evil My Love may take a while to rev up and linger a bit too long, but several riveting sequences and inspired twists keep us engaged throughout. The video and audio transfers lack the sparkle of most Kino Blu-ray presentations, but if you're a fan of British noir, psychological dramas, and the trio of accomplished stars, this release is definitely worth a look.