Overview -
An icon of film noir, Kiss of Death (1947) tells the tale of a petty crook-turned-stool pigeon (Victor Mature) who, in his attempt to go straight, finds himself stalked by a psycho killer, the notorious Tommy Udo. One of cinema’s most frightening villains, Udo is incarnated in a startling début performance by the one and only Richard Widmark, whose career was launched here under the guiding hand of veteran director Henry Hathaway. Shot in documentary style on location in New York City, the film also features a striking score by David Buttolph.
OVERALL
Recommended

"Your side of the fence is almost as dirty as mine."

Some films are defined by a single character, others by a memorable or shocking scene. Kiss of Death is defined by both. Trust me, years from now, you may not remember the film's plot or be able to quote any dialogue, but once seen, the image of a giggling, maniacal Richard Widmark pushing a terrified, wheelchair-ridden Mildred Dunnock down a long flight of stairs will be forever imprinted on your brain. (For a sneak preview, check out the cover art to the right.) It's the sadistic moment that made Widmark a star, and it completely overshadows what remains a finely crafted and engrossing film noir. Kiss of Death may be 70 years old, but it still delivers the goods, blending action, romance, and plenty of underworld drama with a realistic portrait of a paranoid post-war society.

And yet without that classic scene or Widmark's colorful, slightly over-the-top portrayal of a pugnacious, baby-faced gangster with a trademark laugh, Kiss of Death might only merit a film noir footnote today. Sure, the New York location shooting was a novelty at the time, the taut script by acclaimed veterans Ben Hecht and Charles Lederer crackles with tough talk, the performances ring true, and director Henry Hathaway expertly packages all the elements, but the lean story lacks the spice that peppers other, more notable genre entries. Widmark is the spark plug that ignites the film, and he brings a brash boldness to the table that elevates the rest of the production. (Reportedly, his portrayal so enamored 20th Century-Fox studio chief Darryl F. Zanuck, he forced Widmark to recycle aspects of it in several of his subsequent films, much to the actor's dismay and chagrin.)

Kiss of Death is a New York tale, and the city and its environs play starring roles in the production. Nick Bianco (Victor Mature) knows the Big Apple streets well, but his police record makes it hard for him to find a steady job after the war. So like many decent guys hungry for cash to support his family, he turns to crime, and in the movie's tense opening scene, he and a couple of buddies knock off a jewelry store in the Chrysler Building on Christmas Eve. The cops foil their getaway, however, and arrest a wounded Nick, who's quickly offered a deal by Assistant D.A. Louis D'Angelo (Brian Donlevy) if he agrees to finger his fellow thieves. But Nick, who abides by a steadfast code of honor, won't squeal, so a judge slaps him with a five-year sentence and ships him off to Sing Sing.

While in the joint, he learns his wife has committed suicide and his two young daughters have been sent to a state orphanage. Desperate to reclaim and shelter them, he offers his services to D'Angelo, who promises parole if Nick will help put some other elusive criminals behind bars. One of the thugs is Tommy Udo (Widmark), a ruthless mobster with an itchy trigger finger. Nick willingly accepts the assignment, but nailing Udo is no easy task, and as the stakes rise, so does the danger, which soon threatens not only Nick, but his family, too.

Mature, fresh off a dynamite turn as Doc Holliday in John Ford's classic western My Darling Clementine, brings his A game to Kiss of Death as well, filing arguably the second-best performance of his career. Mature often coasted on his chiseled good looks and hunky frame, both of which would serve him well in a series of biblical epics in the 1950s, but he's surprisingly natural and sincere here. He projects not just anguish and hopelessness when required, but also a quiet inner strength that makes him a relatable everyman and admirable hero. Though Widmark eclipses him, Mature more than holds his own, carrying the picture on his brawny shoulders.

Widmark's impact, however, cannot be minimized. With his tongue jutting through his teeth as he cackles with glee and his wild eyes burning holes into his adversaries, he's the spitting image of psychopathic evil, and his debut performance justly earned him a Best Supporting Actor Oscar nomination. (He lost to Edmund Gwenn's delightful Kris Kringle in Miracle on 34th Street.) Not since James Cagney in The Public Enemy or Humphrey Bogart in The Petrified Forest had a gangster so completely galvanized the screen, and when he pushes Dunnock down the stairs in that terrifyingly iconic moment, he ushers in a more graphic era of violence that continues to this day. Yes, Widmark goes a bit too far, slipping ever so slightly into caricature, but his protrayal remains electrifying and influential - so much so, legend has it actor Frank Gorshin modeled his portrayal of The Riddler in the Batman TV series after it.

Colleen Gray as Nick's (very) young love interest asserts herself well, and a host of fine character actors (including a boyish Karl Malden as a police sergeant) add marvelous flavor to the film. Hathaway, who also directed the original True Grit and Marilyn Monroe's Niagara, knows noir well, and his subtle stylistic touches perk up the largely straightforward presentation. With its emphasis on realism, Kiss of Death isn't as flashy and elegant as some of its genre cousins, but it's still a well-crafted movie that makes cogent points about honor, family, and society. But, oh, that wheelchair scene... 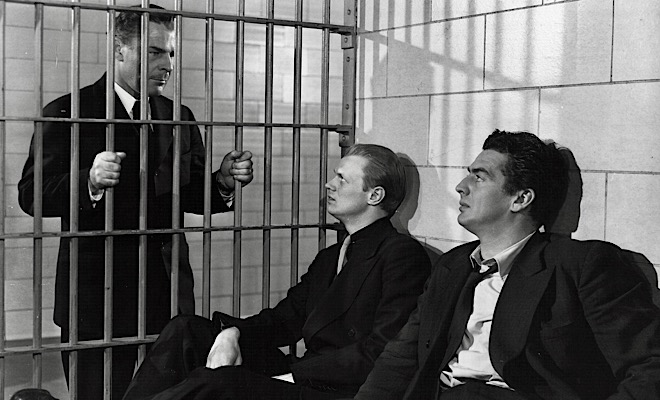 The 1947 version of Kiss of Death arrives on Blu-ray in a limited to 3,000 edition packaged in a standard case. An eight-page booklet featuring an essay by film historian Julie Kirgo, black-and-white scene stills, and a reproduction of the movie's poster art is tucked inside the front cover. Video codec is 1080p/AVC MPEG-4 and audio is DTS-HD Master Audio 2.0 mono. Once the disc is inserted into the player, the static menu without music immediately pops up; no previews or promos precede it.

If produced with care and a keen eye, black-and-white film noir transfers can be stunning, and Twilight Time and Fox hit the bullseye with an exceptional 1080p/AVC MPEG-4 rendering. Terrific clarity and contrast allow the rich, inky blacks and crisp whites of Norbert Brodine's cinematography to pop off the screen, while superior gray scale variance brings out subtle details and enhances depth. Light grain preserves the look and feel of celluloid and nary a speck, mark, or scratch dot the pristine source material. Background elements like photos, paintings, and sculpture are wonderfully sharp, as are patterns on furniture upholstery and wallpaper, and such essential noir components as silhouettes and shadow delineation earn high marks, too. Close-ups show off Mature's ruggedness and Widmark's baby face, as well as the sweat that faintly glistens on the characters' faces, and no digital anomalies mar the presentation. Once again, Twilight Time and Fox properly honor a classic film noir title, and that's good news for fans of the genre.

The DTS-HD Master Audio 2.0 mono track supplies clear and well-modulated sound. The film's realistic style keeps flashy audio to a minimum, but effects like gunfire, a slap across the face, sirens, and an alarm bell nicely punch up the track. David Buttolph's music is sparingly employed, but sounds appropriately robust, and all the dialogue is clear and easy to comprehend. Best of all, no age-related hiss, pops, or crackles muck up the mix. Like the film, this is a no-frills track that serves the story and gritty atmosphere well.

Just a couple of supplements enhance this limited edition release.

Audio Commentaries. Two commentaries are included on the disc.

The first, which was ported over from the previous DVD release, pairs noir experts Alain Silver and James Ursini, who characterize Kiss of Death as a "docu-noir" driven by "determinism." They discuss the film's Christian symbolism, the legend behind Widmark's trademark Tommy Udo laugh, and how jazz influenced Widmark's performance. The duo also addresses the oddity of the female narrator, identifies many of the New York locations, reveals the significance of the movie's title, and compares the film to its 1990s remake. In addition, they include a great quote from director Henry Hathaway: "To be a director, you have to be a bastard." Though informative and well spoken, this track drags a bit over time, but most of it will enlighten and entertain film noir aficionados.

The second commentary reunites Twilight Time regulars Julie Kirgo and Nick Redman, who provide further insights into the components of noir, the post-war pessimism that pervaded the country at the time of the picture's release, and how Kiss of Death accurately depicted America's morally compromised society. They also praise the underrated Mature and make the case that Hathaway's commitment to professionalism may have impeded his reputation as an artist. Whenever Kirgo and Redman get together, the interplay is always spirited, involving, and filled with astute observations, all of which make their commentary equally worthwhile. Though Kiss of Death may not warrant two commentary tracks, fans of the film will appreciate the perspectives of all four participants.

Theatrical Trailer (HD, 3:00). The film's original preview features noted newspaper columnist Walter Winchell singing the movie's praises. He says Kiss of Death "has authenticity stamped all over it" and was "written with a machine gun."

Kiss of Death is far from my favorite film noir, but it remains a gritty and engrossing genre entry that features a crackerjack story and script, excellent performances, and lean direction. This chronicle of a habitual criminal's transformation and rehabilitation makes good use of its New York locations, which add critical authenticity, and includes a breakout portrayal by Richard Widmark in his film debut. Superior video and audio transfers and a couple of cogent commentaries distinguish Twilight Time's Blu-ray release, which deserves a spot in every noir lover's collection. Recommended.