One good turn always deserves another - John Frankenheimer and Burt Lancaster's The Train gains steam again on Blu-ray thanks to Kino Lorber Studio Classics who picked this title up after two sold-out runs from Twilight Time. While uneven with its combination of meditative personal explorations of art and cultural heritage with exciting action set pieces, this is still a classic war film with starkly beautiful black and white photography, a thrilling villain and hero dynamic, and one hell of an ending! KLSC uses the same video transfer again while propping up the audio mix to a DTS-HD MA 2.0 mix instead of the mono 1.0 - but there's little difference really. We get some new bonus features, lose some bonus features, but if you missed out on either Twilight Time disc, this is an excellent release all around. Highly Recommended.

The war's end is near. The allies are mere days away from liberating Paris. Before American, French, and English troops march into the city, Colonel Von Waldheim (Paul Scofield) has ordered the theft of the most priceless paintings, the cultural heritage and glory of France to be shipped off to Germany for his own personal collection. Under pressure from the French resistance leaders and the allies, railroad man Labiche and his team of saboteurs must find a way to safely stop the train without destroying the irreplaceable works of art.

Our resident Classics Guru David Krauss already reviewed The Train on Blu-ray - twice. Since he covered those two Twilight Time releases, he was ready to pass the torch to someone else for the Kino Lorber Studio Classics re-re-release. Those two releases from Twilight Time are virtually identical - you can read reviews for them HERE and HERE.

While I do agree with David that The Train can be very uneven, I think it's a better movie than it's often given credit. It really is the product of two directors, Arthur Penn developed the film, cast the film, oversaw the screenplay - apparently lending his hands there as well. By all accounts, it was turning into an Arthur Penn film starring Burt Lancaster. But - Lancaster was the producer and star, he called the shots. After one day of filming Penn was fired, John Frankenheimer was hired, and the production shut down so they could retool the script to speed up the action.

The final product admittedly feels like a pie with a lot of hands in its making. Elements of Penn's more meditative intentions about the relationship between humanity and dignity with art remain. If you took a shot every time someone contemplatively uttered "the glory of France" you'd have a hell of a drinking game. Then you have the intense kinetic energy Frankenheimer brought to the production staging impressive and thrilling action sequences with Lancaster often front and center doing his own stunt work. 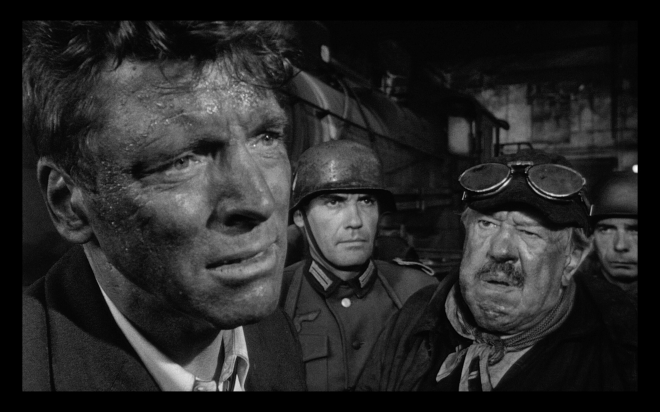 Despite the tinkering, the stuttering pace, and some of Lancaster's more "theatrical" monologues, I dearly love this movie. And not for nostalgia's sake that it was one of the films my wife introduced me to early in our relationship. I've always admired Frankenheimer and what he brought to films - especially troubled productions where he'd be unceremoniously brought in to save a film. His use of deep focus long takes for me always brought an intimate edge to any scene. Watch the scene where Labche pleads for Papa Boule's (Michel Simon) life. Lancaster's face takes up the left side, Simon and a Nazi Goon in the middle, with the extensive trainyard into the background all teeming with activity. It's beautiful photography and scene direction and there are numerous moments like that throughout the film. The human element is never lost even against several thrilling action set pieces.

If there's a knock I will give the film is that it plays to Burt Lancaster's best and worst tendencies. As a former circus trapeze performer, he brings intense physicality to every movie ready and willing to do all his own stunts. As a genuine dramatic actor, he can bring emotional weight to any role with simple mannerisms and line utterances. A simple "no" or "yes" carries more weight with Lancaster than a monologue. With The Train, the film seems to almost go out of its way to showcase Lancaster's natural physicality while also indulging some over-long monologues complete with some very stage-like gesturing that plays better for the back of the house than a major motion picture. But with a lot on the line and the need for a hit, I can forgive these indulgences.

Where The Train works best is the cat and mouse game between Colonel Von Waldheim and Labiche. While this story is based on historical efforts from French Resistance and railroad men to keep trains like the one featured in the film diverted long enough for the Allies to rescue them, it's the dynamic between the two leads that sells this show. At first, you're deceived that Von Waldheim may actually not be so bad - for a Nazi. He appreciates the art but is greedy and wants it for himself. However, we soon realize he's willing to risk any amount of human life to ensure the safe delivery of his prize. On the other hand, Labiche doesn't really give a damn about the art. It's important sure, but human lives are more important to him. He goes out of his way to make sure as few lives as possible are lost. When the death toll mounts he questions whether or not the mission is worth it. But then it's pointed out that all of the lives lost would be for nothing if Von Waldheim wins and so the game becomes personal - right to the bitter end.

The Train pulls into the Blu-ray station for the third time. After two sold-out runs from Twilight Time, Kino Lorber Studio Classics pics the film up for another go at Blu-ray. Pressed on a Region A locked BD-50 disc, the disc is housed in a standard case with an identical slipcover. The insert artwork is reversible featuring alternate poster art for the film. Included is a booklet containing a new essay from Julie Kirgo - at least it's new from the first release. I don't have the second reissue from Twilight Time to compare. The disc loads to a static image main menu with traditional navigation options.

Kino Lorber Studio Classics uses the same 1.66:1 1080p transfer sourced for the previous Twilight Time releases. My understanding is this master is cobbled from a variety of best available elements and at times shows some notable wear and tear. I would love a full restoration with a 4K UHD Blu-ray release, but as it stands, this is still a great transfer - infinitely better than the old MGM non-anamorphic DVD. Details are often striking with the beautiful black and white photography and a natural film grain presence. Black levels are often deep, inky black with a great shadowy grayscale to give the image a terrific sense of depth and dimension. Speckling, staining, and some outright damaged segments still remain without cleanup work. While I hope that this one will see greater glory, I'm still very satisfied with this excellent 1080p transfer.

Where the previous Twilight Time releases offered a DTS-HD MA 1.0 mono mix, this release from KLSC has been bumped up to a DTS-HD MA 2.0 mono mix that really doesn't add a whole lot to the show but still works nicely. Spread over the channels, this mix may offer a little more impact here and there, but flipping between the discs there really isn't a lot of variance. Dialog is still clean and clear. The Maurice Jarre score still hits the right notes between overt patriotism and steady thrills. Action sequences still have a terrific impact and the steady chugging of a train cooling down still packs a sonic wallop in the film's final moments.

Some of the same bonus features for The Train return for this new release from Kino Lorber Studio Classics - but some have been omitted. Lost is the Julie Kirgo and Nick Redman commentary, but we now have a new - and very good - commentary featuring Filmmaker/Historian Steve Mitchell and author Steven Jay Rubin. The excellent John Frankenheimer audio commentary returns as well. The Maurice Jarre isolated score is still here and we pick up a new Trailers From Hell segment featuring Brian Trenchard-Smith.

While the world probably didn't need a third release of The Train - it's nice to see that Kino Lorber Studio Classics have been reissuing some of the out of print Twilight Time titles to ensure they're still available. It may be a bit uneven, but The Train is still an excellent, highly-entertaining action/war film that just happens to have a true story background. It's not historically accurate, but that doesn't keep it from being enjoyable. Burt Lancaster and John Frankenheimer made some great movies together and this is one of them.

Kino Lorber Studio Classics delivers a new Blu-ray release using the same video transfer previously available. It has issues, but without a major restoration it won't look any better - but it's still a solid transfer that doesn't disappoint. The audio has been upgraded slightly but nothing too significant. Most of the previous bonus features have been ported over. We lose the Twilight Time commentary but we get a new commentary as well, win some lose some. If you missed either of the Twilight Time releases, this new KLSC disc is more than satisfactory. However - if you already own the film, there's not much call here for another purchase. At the end of the day, this is still a Highly Recommended release - specifically if you haven't picked it up yet.