In 1944, a German colonel loads a train with French art treasures to send to Germany. The Resistance must stop it without damaging the cargo.

Before 'Runaway Train,' 'Unstoppable,' and 'The Monuments Men,' there was 'The Train,' a full-throttle, if somewhat lumbering, actioner that mixes history with popcorn thrills and showcases the athleticism of its beleaguered star, Burt Lancaster. Though filled with enough crashes, explosions, and gunfire to satisfy the most jaded action junkie, this John Frankenheimer film travels in fits and starts, picking up speed one minute, then taking its foot off the gas the next. The jerky rhythm often impedes the movie's momentum, especially as the narrative stretches beyond its natural arc, so by the time 'The Train' reaches the end of its very long line, we are weary travelers indeed. And what we're left with after the clouds of steam dissipate and the soot and grime settle is an intermittently exciting, loud, and overblown exercise in suspense that surely satisfies, but only sporadically exhilarates.

Traversing similar terrain as 'The Monuments Men,' 'The Train' chronicles the efforts of a group of French freedom-fighters who stop at nothing to thwart the plan of a fanatical Nazi colonel to plunder dozens of French art treasures by such iconic geniuses as Renoir, Van Gogh, and Picasso during the waning days of the Third Reich. Col. Von Waldheim (Paul Scofield) knows the Allies will liberate Paris any day, so with the efficiency that defined the Nazi regime, he orders his minions to quickly load France's priceless stash of irreplaceable art onto a chartered train bound for Germany, where the paintings will conveniently disappear into Hitler's coffers.

The square-jawed stationmaster, Labiche (Lancaster), must engineer the train's safe passage to the Fatherland, but he's also in cahoots with the Resistance, which decries the pillaging of France's national heritage. In a race against time, Labiche bands with a motley group of saboteurs, sending the train on a circuitous path in the hope Resistance and Allied forces will derail and destroy it before it reaches the border...without damaging the precious cargo lodged inside. That's a tricky proposition, and it provokes a spirited battle of wits between Labiche and Von Waldheim, who proves to be a formidable (and extremely pig-headed) adversary, that soon consumes and ravages both men.

In the days before CGI became an action director's best friend and closest ally, honest-to-goodness stunts had to be carefully orchestrated and executed - without the luxury of retakes - and from that standpoint alone, 'The Train' is an impressive production. Collisions, derailments, and detonations are thrillingly presented from a variety of angles, including the air, which enhances the scope and impact of such set pieces. Lancaster nicely integrates his acrobatic ability into the film (he was a circus performer before he became a movie star), yet many of the actor's impressive maneuvers often seem like scripted opportunities for shameless showing off.

Though the film is largely remembered for its action sequences, the screenplay by Franklin Coen and Frank Davis received an Oscar nomination, and features some memorable lines and ruminations on the nature and importance of art in society. But there's little symbiosis between the narrative and exciting train scenes, and the resulting choppiness combined with the picture's indulgent length stymie what should have been a taut, efficient thriller.

Its basis in history lends 'The Train' appropriate gravitas (it's inspired by the memoir of Rose Valland, who almost single-handedly catalogued, protected, and recorded the whereabouts of artistic masterpieces stolen and later hidden by the Germans, thus enabling the Allies to relocate them after the war), but too much intrigue and over-the-top action often trivialize the true-life tale. While Scofield, who would win the Best Actor Academy Award for his stoic performance as Sir Thomas More in 'A Man for All Seasons' two years later, crafts a masterful portrayal as the devious, tortured Nazi colonel, Lancaster is largely inert in his far more blustery role. First and foremost, Lancaster refused to adopt a French accent, so it's impossible to believe he's really a Gaul, especially when he's interacting with authentic Frenchmen. And his overly studied acting style reportedly drove co-star Jeanne Moreau - often dubbed France's answer to Bette Davis - crazy. She complained to a reporter: "Burt Lancaster! Before he can pick up an ashtray, he discusses his motivation for an hour or two. You want to say just pick up the ashtray and shut up." Even Frankenheimer, who replaced Arthur Penn as director a few days into shooting at Lancaster's request (and shifted the focus from the cerebral to the physical), later confessed to a cinema historian: "If Burt Lancaster and I had that film to do over again, we would both do it differently."

That's quite an admission, especially considering the film's popularity. Yet while I marvel at the movie's dazzling look (the black-and-white cinematography is consistently stunning) and admire the construction of its action sequences, I can't help but wish 'The Train' got under the skin of its two leads more completely. That was the film's original intent, but when Frankenheimer came on board, Lancaster persuaded him to take the story in a different direction - most likely because the star needed a hit movie after a string of sophisticated disappointments. The powerful ending packs a punch, but some judicious tightening and more concentration on how the works of great artists inspire passion in those who appreciate them and promote a sense of patriotism would have made a more lasting statement.

Unfortunately, 'The Train' quickly loses sight of its premise and instead becomes more of a generic good guys versus bad guys wartime tale. And on that level it's still a good movie, but it doesn't set itself far enough apart from its cinematic cousins in a very cluttered genre. 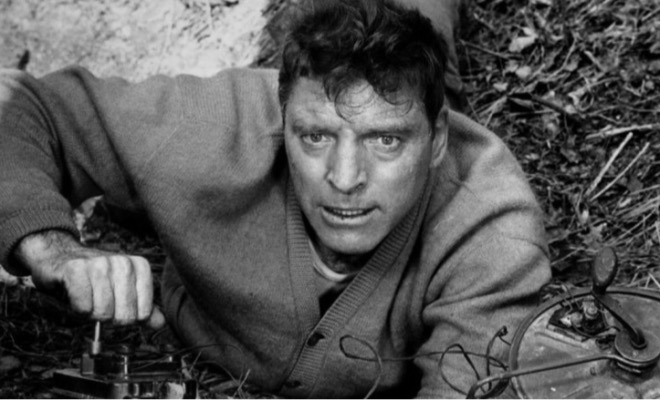 The Encore Edition of 'The Train,' a limited to 3000 edition from Twilight Time, arrives on Blu-ray packaged in a standard case. The cover art and disc picture differ from the original release, as does the layout of the eight-page booklet, which features the same essay by historian Julie Kirgo and the same color reproduction of the movie's poster art. But instead of photo collages, a few full-page black-and-white scene shots accompany the essay, and the new, sleeker design is more attractive and impactful than that of its predecessor. Both the video and audio transfers are the same ones that graced the previous release, and all the extras have been recycled, too. Video codec is 1080p/AVC MPEG-4 and audio is DTS-HD Master Audio 1.0. Once the disc is inserted into the player, the static menu without music immediately pops up; no previews or promos precede it.

'The Train' would have looked beautiful in color, but the black-and-white photography by French cinematographers Jean Tournier and Walter Wottitz lend it an appropriate grit and striking period feel that suit the film well. Twilight Time's 1080p/AVC MPEG-4 transfer - the same one that graced the original Blu-ray release of 'The Train' - celebrates the artistry on display, thanks to excellent contrast and clarity, both of which highlight the drab, misty exteriors and stark interiors well. A natural grain structure maintains the look of celluloid, but never overwhelms the image and remains fairly consistent throughout. Some scenes exude a slightly softer appearance than others, and exposure levels vary a bit, too, due to the location shooting, but rarely do the discrepancies produce a jarring effect. Terrific gray scale variance brings out lots of details and textures, shadow delineation is quite good, and background elements are always easy to discern. Close-ups spotlight facial features well, from furrowed brows and facial hair to careworn creases, sweat, and battle scars.

My main gripe with this transfer is the lack of clean-up. 'The Train' is 50 years old, and at times, it looks its age, due to innumerable specks and marks that dot the print. The damage is evident from the opening frames, and though levels of intensity fluctuate throughout, almost every scene is affected. Never is the picture unwatchable, but the constant stream of faint speckles becomes slightly annoying over time, especially for sticklers like me. Despite this nagging issue, the transfer for 'The Train' earns solid marks. I just hope the proliferation of Twilight Time releases doesn't compromise their quality in the future.

Though it is only mono, the DTS-HD Master Audio 1.0 track - once again, the same track included on the original Blu-ray release of 'The Train' - pumps out plenty of potent sound that enhances the action sequences and maximizes the impact of every sonic element. Excellent presence, depth, and fidelity distinguish the track and make us believe the soundscape is wider than it is. The piercing shrillness of train whistles and air-raid sirens are marvelously rendered, while myriad crashes and explosions possess formidable heft, despite the lack of a designated bass channel. The rat-a-tat-tat of machine gun fire is appropriately crisp, and accents such as footsteps come across cleanly. Superior dynamic range handles the highs and lows of Maurice Jarre's music score with ease, and all the dialogue is easy to comprehend. No distortion mucks up the works, and no age-related imperfections, such as hiss, pops, and crackles, betray the film's vintage nature. Though it can't compete with modern-day, multi-channel action movie tracks, this effort is solid, immersive, and very pleasing.

All the extras from the previous release have been ported over to this "encore edition." If audio commentaries are your thing, then you'll enjoy the supplements included on this disc. Otherwise, you're pretty much out of luck.

Just like that freight train that keeps you waiting forever at the railroad crossing, John Frankenheimer's 'The Train' tries our patience with its length, but the bursts of action in between all the talk are exciting enough to keep us on board until this steel-jawed action flick reaches the end of the line. This may not be one of Burt Lancaster's most memorable portrayals, but it's certainly one of his most athletic, and his star power and blistering intensity bolster his performance. Paul Scofield, however, brings his A game as a stubborn, frustrated Nazi who will risk everything and expend everybody to secure the artistic treasures of France for the crumbling Third Reich. Twilight Time's "encore" Blu-ray presentation features the same solid, if speckle-ridden, video transfer and potent mono audio, and provides a couple of commentaries for fans. (Bottom line: there's no need to double dip if you own the previous edition.) Action aficionados and World War II buffs will certainly want to give this flick a spin; for all others, it's worth a look.