From director Dean Parisot, Bill & Ted Face the Music not only sees a most triumphant return of Alex Winter and Keanu Reeves as the time-traveling best buds, but the third installment in the beloved sci-fi buddy comedy franchise also strikes the perfect harmony for 2020. The lovable doofuses crash into Blu-ray with a totally bodacious audio and video presentation and a sadly puny collection of supplements. Nevertheless, the overall BD package is Highly Recommended for Wyld Stallyns fans throughout space and time. 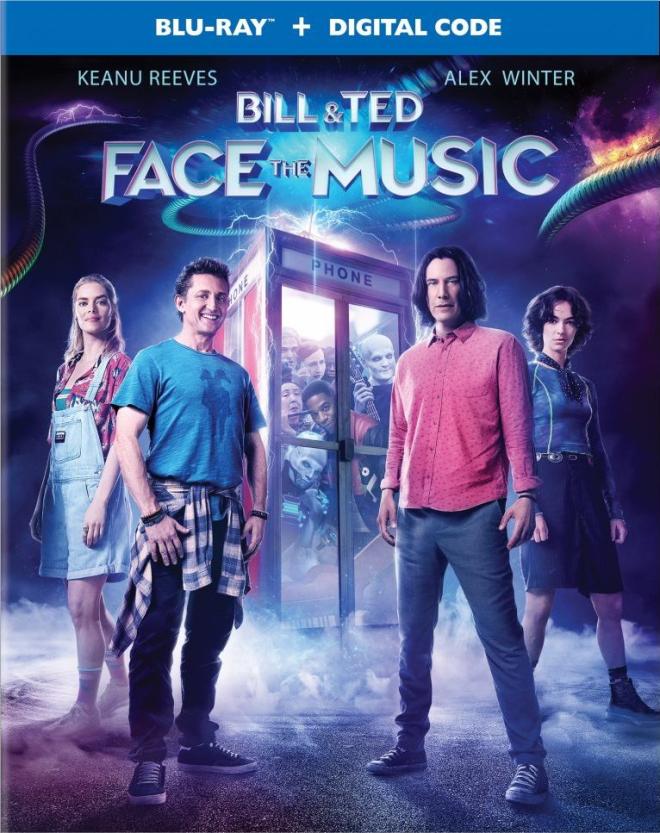 Picking up thirty years after a most triumphant adventure through history, time and the afterlife, Bill S. Preston, Esq. (Alex Winter) and Ted "Theodore" Logan (Keanu Reeves) now brave an even more bodacious journey in Bill & Ted Face the Music: suburbia, parenthood and an unexpected midlife crisis. Decades and several music albums later, the two are still joined at the hip and do everything together, including couples therapy with princesses Joanna (Jayma Mays) and Elizabeth (Erinn Hayes). They even named their daughters after one another: Billie (Brigette Lundy-Paine) and Thea (Samara Weaving), who obviously take after their fathers. Sadly, not everything is stellar in slacker paradise after the Wyld Stallyns failed to produce the music that would unite the world into a resplendent utopia. Nevertheless, they live without regrets until the sudden realization their universe is on the brink of collapse.

From Galaxy Quest director Dean Parisot, the third and possibly final installment to the sci-fi buddy comedy series starts feels rushed and somewhat disjointed, at first, with several jokes barely registering a giggle. Nevertheless, Parisot manages to keep things entertaining and moving forward at an upbeat pace while Winter and Reeves immediately charm audiences with their winningly familiar optimism and idealistic outlook. The script, by franchise creators Chris Matheson and Ed Solomon, also steers clear of any cynical and pessimistic pitfalls with a surprisingly thoughtful plot that smoothly navigates through the laughs and silliness to finally land with genuine sincerity on the simple theme of it never being too late. In a brilliant stroke of genius, the real dilemma standing in their way is their future selves, bitter and angry with remorse, while a startling sense of self-awareness feels genuinely amusing and witty, coming together in the most triumphantly satisfying way that reminds us to be excellent to each other.

For a more in-depth take on the film, check out our review of the digital release HERE.

Warner Home Video and Orion Pictures brings Bill & Ted Face the Music to Blu-ray with a flyer code for a Digital Copy. The Region Free, BD50 disc is housed inside a blue, eco-cutout case with a glossy slipcover. At startup, viewers are taken to a generic static menu with the usual options along the bottom and music playing in the background. 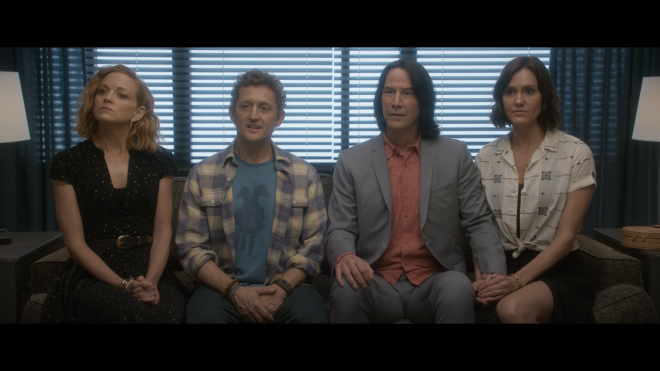 The third adventure through space and time lands on Blu-ray with a most excellent and totally bodacious 1080p/AVC MPEG-4 encode, immediately brightening the screen with a vivid and energetic pop in the opening moments. Coming directly from a digital source, the freshly-minted transfer arrives with spot-on contrast balance, showering the screen with resplendent whites and crisp, eye-squinting highlights. Brightness levels also deliver accurate, inky blacks throughout and dark, rich shadows the penetrate deep into the screen, providing the 2.39:1 with outstanding visibility in the darkest corners and appreciable dimensionality. However, there are moments where the black falter somewhat, looking darker grey and murky, flattening the picture a tad, but thankfully, such instances are relatively small.

Being an upbeat and optimistic comedy, the HD video also debuts with a sumptuous array of colors, permeating the action and conversations in ecstatic, wildly animated primaries. True to Shelly Johnson's stylized cinematography, the palette places more emphasis on jubilant, dynamic secondary hues, bathing much of the runtime in lots of pinks, magentas, cyans and purples while highly-revealing facial complexions appear natural and healthy. At the same time, the presentation is consistently sharp and detailed, displaying well-defined lines in the clothing, various props and around various buildings. We can plainly see the smallest crevice and crack in the rock formations in Hell, and every blade of grass and leaf in the trees of the manicured lawns of Preston/Logan's suburban cul-de-sac is distinct. (Video Rating: 88/100) 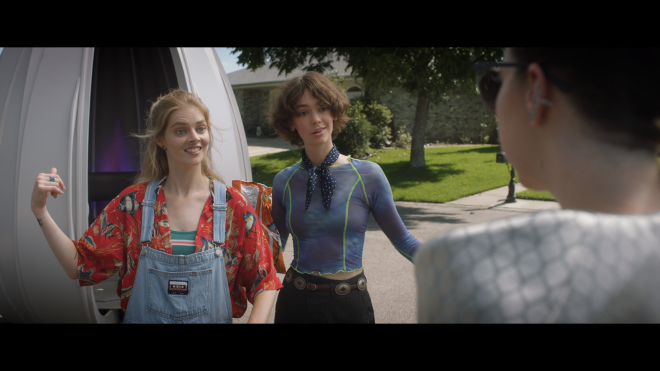 The lovable doofuses crash into home theaters with a most outstanding and highly entertaining DTS-HD Master Audio 5.1 soundtrack, sure to make those who rock scream for an encore. Although much of the attention is placed on the jokes and dialogue, the screen is actually vibrant and full of life as a variety of background activity smoothly bounces between the three front channels. Imaging continuously feels broad and spacious with distinct separation in the mid-range, displaying exceptional clarity and acoustical detailing even during the loudest rocking segments. A surprisingly powerful and robust low-end nicely complements the visuals with room-energizing oomph and some hard-hitting weight while the vocals remain crystal clear and precise amid the chaos and toe-tapping music. Also surprising are the various atmospheric effects flawlessly panning between the fronts and surrounds, like a flying vehicle gliding through the air, demons soaring across Hell or the music reverberating all around the listening area. Such moments are satisfyingly immersive and make this second sequel a truly triumphant listening experience at home. (Audio Rating: 90/100) 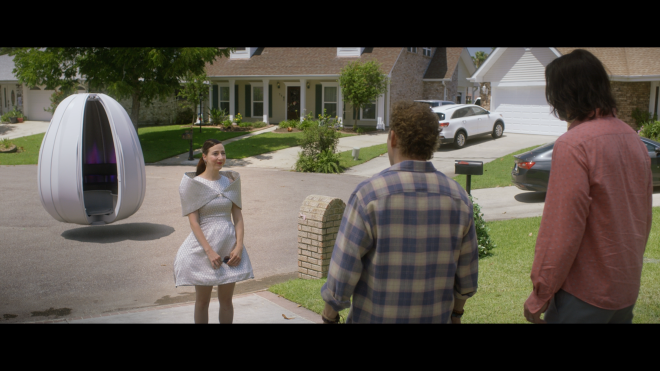 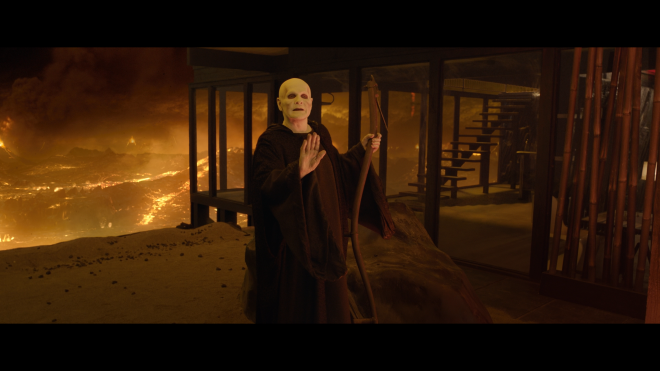 Alex Winter and Keanu Reeves make a most triumphant return as the time-traveling best buds in Bill & Ted Face the Music, the third installment in the beloved sci-fi buddy comedy franchise. Although it hits a few snags at the start, director Dean Parisot's sequel eventually manages to come together and strike the perfect harmony for 2020, giving audiences exactly the right tune and rhythm needed for combating contemporary cynical outlooks. The lovable doofuses crash into Blu-ray with a totally bodacious HD video and a most triumphant DTS-HD MA presentation. The assortment of special features are sadly small but nonetheless enjoyable and a breeze to get through. In the end, the overall BD package is highly recommended for Wyld Stallyns fans around the world and throughout space and time.