High-Def Digest was given the chance to take a look at Keanu Reeves and Alex Winter's most triumphant return in Bill & Ted Face the Music, courtesy of Orion Pictures, MGM and United Artists Releasing. The Video, Audio, and Bonus Features sections have not been analyzed since they're not pertinent at the moment. However, when a Blu-ray is made available, we will update the review accordingly.

Picking up thirty years later since last joining Bill S. Preston, Esq. and Ted "Theodore" Logan on a most triumphant adventure through history, time and the afterlife, the pair of lovable doofuses now brave an even more bodacious journey in Bill & Ted Face the Music. In the third and possibly final installment to the series, the world's best and most loyal buds are made to face suburbia, parenthood and an unexpected midlife crisis. However, as cynical as that may first seem, the plot steers far from falling into a pit of seriousness while still managing to be surprisingly thoughtful, smoothly navigating through the laughs and silliness to finally land with genuine sincerity on the simple theme of it never being too late. In this age of widespread uncertainty, a worldwide pandemic and civil unrest, the sci-fi buddy comedy from Galaxy Quest director Dean Parisot is exactly the song needed for uniting the world.

Real-life friends, Alex Winter and Keanu Reeves reunite to reprise their iconic characters, Bill and Ted, hilariously living next door to each other in a quiet cul-de-sac neighborhood and playing a wedding gig for their former stepmother Missy. Like putting on a comfortable pair of cozy slippers, the actors effortlessly slip into their respective roles as though they never left and immediately charm audiences with their winningly familiar optimism and idealistic outlook. Decades and several music albums later, the two are still joined at the hip and do everything together, except now, their focus is on experimental music using a theremin, bagpipes and steelpans. This also includes going to couples therapy with princesses Joanna (Jayma Mays) and Elizabeth (Erinn Hayes), and they even named their daughters after one another: Billie (Brigette Lundy-Paine) and Thea (Samara Weaving), who obviously take after their fathers. 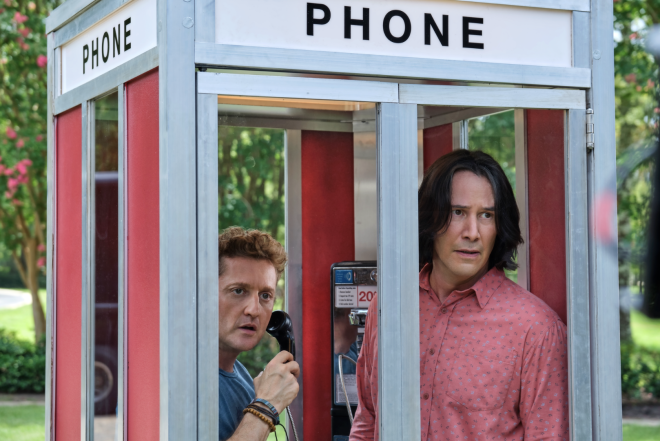 Sadly, not everything is stellar in slacker suburban paradise with the biggest disappointment being the Wyld Stallyns failing to produce the music that would unite the world into a resplendent utopia. Regardless, the two live life without regrets, which is admirable until suddenly, to their shock and dismay, the ladies reveal they have doubts about their current arrangement, bringing their lives to a halt and their universe to the brink of collapse. Right on cue, almost as if everything were scripted or destined to happen, Rufus' daughter Kelly (Kristen Schaal) lands in an egg-shaped time machine with a most heinous warning of all life on Earth coming to end unless they perform their fated song that will unite all time and space. In a brilliant stroke of genius, the real dilemma standing in their way — other than having to save all of reality — is their future selves, angry with remorse of what could have been.

To be perfectly honest, but in a most non-odious way, Bill and Ted's third outing after so many decades came with a bit of apprehension, made all the worst by the opening moments. The first ten minutes feel rushed and somewhat disjointed with several jokes barely registering a giggle. Thankfully, once the lovable dolts are given their mission, things kick into high gear with a startling sense of self-awareness and smarts (78 minutes to create the perfect song! Really!?), never seeming forced but genuinely amusing and witty. From a script by original creators Chris Matheson and Ed Solomon, Face the Music also give ample time for Billie and Thea, portrayed to perfection by Lundy-Paine and Weaving, to travel the history of rock music while their dads battle with unpleasant versions of themselves. And by the end of the story, as Bill keeps pointing out, it all makes sense and comes together in a most triumphantly satisfying way. The wait was well worth it with a reminder to be excellent to each other.

Orion Pictures and MGM releases Bill & Ted Face the Music simultaneously to select theaters and Video On Demand (VOD). The third entry in the series is also available for purchase on digital streaming services such as FandangoNOW and VUDU, which offers users the chance to enjoy the movie at home in 4K Ultra HD and Dolby Digital Plus 5.1 audio.

Alex Winter and Keanu Reeves make a most triumphant return as the time-traveling best buds in Bill & Ted Face the Music, the third installment in a sci-fi buddy comedy written by original creators  Chris Matheson and Ed Solomon and directed by Dean Parisot. Although it hits a few snags at the start, the movie eventually manages to come together and strike the perfect harmony for 2020, giving audiences exactly the right tune and rhythm needed for combating contemporary cynical outlooks.