Burt Lancaster and Robert Aldrich team up for the desert action western - Apache. Lancaster hardly passes as a 6'2" blue-eyed Native American warrior with a New York accent, but as with every Lancaster performance, he delivers delving deep into the character to help craft a story that serves as a relatable parable to the current times. Historical accuracy set aside and it is a product very much of its time in Hollywood history with casting and redface - Aldrich keeps the action dynamic and the story moving for a rousing western adventure. Kino Lorber Studio Classics delivers Apache to Blu-ray with a serviceable transfer and audio mix but void of any notable bonus features. If you're a fan of Lancaster or the film itself, this is a decent upgrade over the old DVD but for newcomers, this one is certainly Worth A Look. 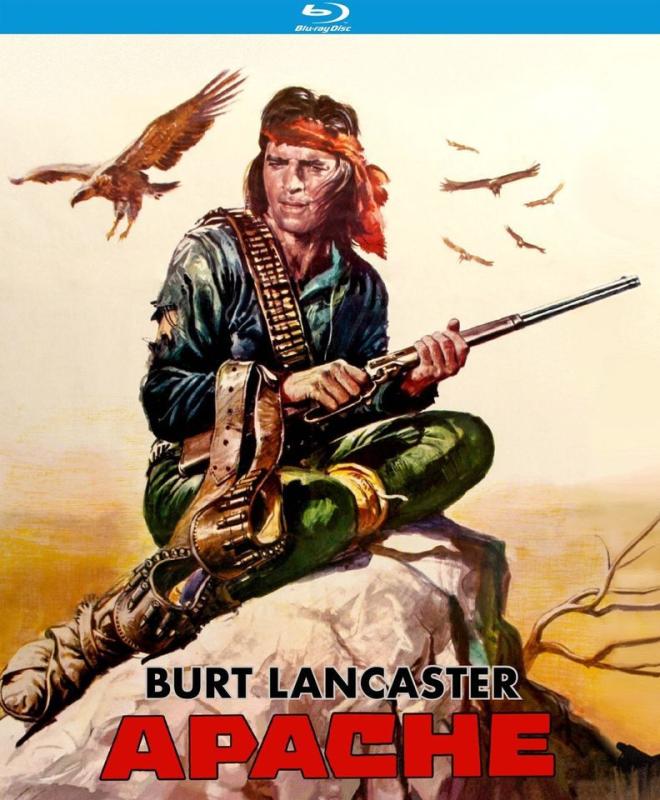 The last Apache warrior willing to die for freedom - Massai (Burt Lancaster) refuses to surrender with Geronimo to white soldiers. After escaping the transport train that would have him imprisoned in Florida, Massai crosses the country to return to his people and show them the possibility of a more peaceful life. But when the chief Santos (Paul Guilfoyle) betrays him, Massai has no choice but to kidnap Nalinle (Jean Peters) and wage a one-man war on the Army, their representative Al Sieber (John McIntire), and their native corporal Hondo (Charles Bronson). With peace easily at hand, neither side is ready to give up the war.

Years ago when I jockeyed a counter at my local Hollywood Video, I got on a real kick burning through our classics section. I was always a fan of Burt Lancaster; The Professionals, Elmer Gantry, and The Train were major favorites of mine so I wanted to pick through Lancaster's movies we had in our massive library. Getting to put on whatever I wanted in the morning was always the nice thing about that gig as I got a few hours each day before customers would arrive to dig through these movies. This was how I discovered Robert Aldrich's Apache with the blue-eyed 6'2" New Yorker standing in as the real-life Massai.

Of the four films Robert Aldrich and Burt Lancaster made together, Apache isn't their greatest achievement. It's good as an action movie but as a historical document of events it's a bit squishy. As is the casting. This film is certainly a product of the era where whites were commonly cast in Native American roles donning brown/red skin coloring. To this one's credit, at least none of the white actors speak in that strained cliche of halting broken English. But needless to say, Lancaster is hardly a convincing Apache warrior. Instead, you need to view this movie as any other Lancaster movie, he's simply embodying a role. In The Train, he's the only actor not even attempting a French accent. More or less that's the same thing here with some additional racial implications added to the stew.

Troublesome representation issues aside, this is an action western at heart with a strong message about the need for peace. Aldrich is a filmmaker who always wore his politics on his sleeve. As Ulzana's Raid was a message about Vietnam, Apache is about the close of the Korean war and the need to end the military-industrial conflict and focus on peaceful life-fulfilling endeavors. And to that end, this movie does work. It may be a clunky journey to get there but it's a worthwhile passage. Lancaster delivers another passionate performance leaning into the natural physicality he brings to every role. It's fine filmmaking overall, but Vera Cruz and Twilight's Last Gleaming are the two best Aldrich/Lancaster films.

Apache makes its Blu-ray debut thanks to Kino Lorber Studio Classics in a single-disc Region A BD-50 disc. The disc is housed in a standard keepcase and loads to a static image main menu with traditional navigation options. 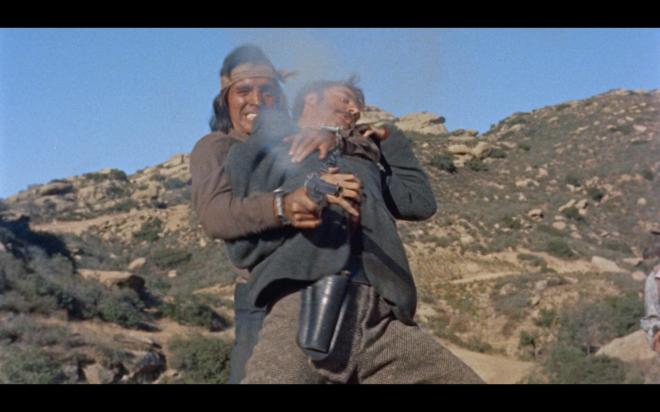 Apache brings its war to Blu-ray with decent results offering a satisfactory 1.85:1 1080p transfer. Without any indication that this was sourced from a new restoration or remaster, my wager is this film was sourced from the already existing aged HD masters. There's a crispness to the image allowing for some decent details to come through in close-ups and midranges, but there is some speckling and image staining that persists. A number of shots showcase some softness while others look as though a slight pass of edge enhancement was used as some banding crops up in a couple of moments. Black levels are also inconsistent where Massai was traveling through a city looks great, but then when he's meeting with Santos in the hut, the black levels were more blue-tinged. That could be optical processes from original post-production and cooked in, but the image looks notably flatter. Colors have a nice primary pop in many of the key sequences with that vivid technicolor punch, but they don't quite leap off the screen in other places. Where Lancaster's blue eyes can sparkle, some yellows, reds, and greens have a slightly washed quality to them. It's a win some lose some transfer. There's a lot to appreciate, especially the scenic locations, but it's not pristine and could have used a little extra TLC. 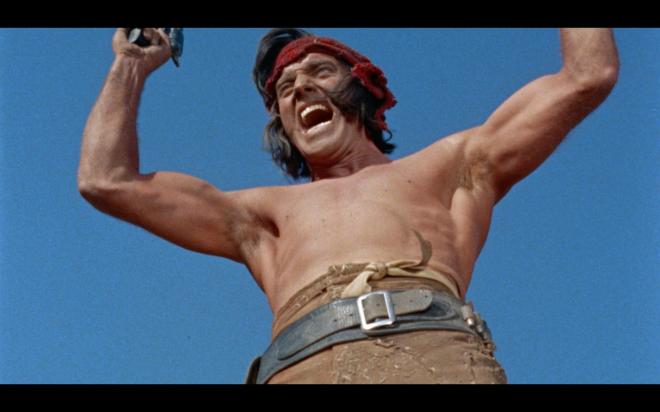 Much like the video transfer, Apache comes with a decent and effective DTS-HD MA 2.0 mono track that gets the job done. Dialogue is clean and clear throughout without issue. However, there are a few sequences that sound flat and lifeless as if they were all re-recorded in post-production. The scene where Massai and Nalinle are trying to plant corn is a bit flat without any feeling of the open location where it was shot. But then a few scenes later for the climax, the mix is great giving a great sense of dimension and impact with gunshots, screams, footfalls, etc. Pretty good stuff overall. The track is free of any hiss or pops or other age-related issues. 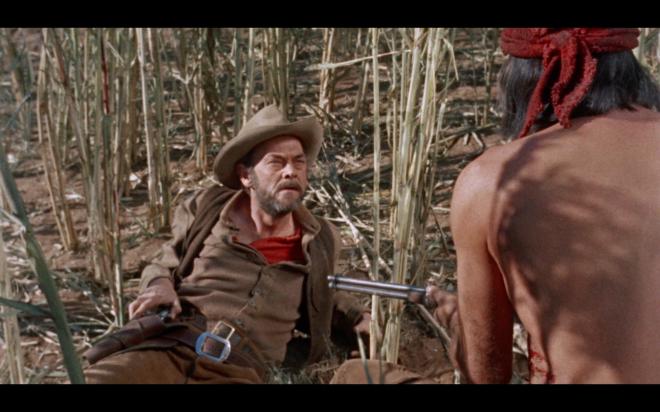 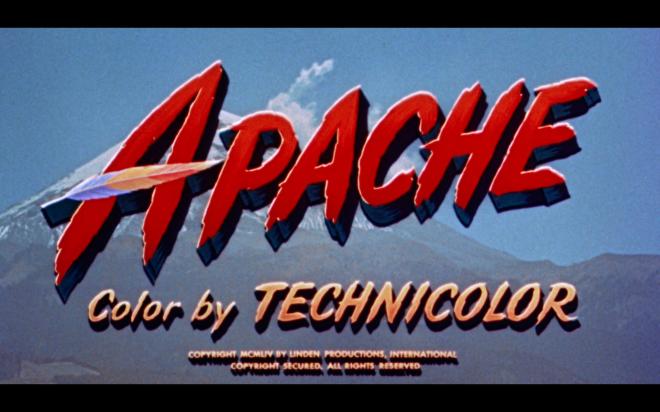 Apache is good for entertainment's sake. Burt Lancaster is commanding as ever and true to his career as a performer, embodies the character as fully as he can. Robert Aldrich keeps the action moving without losing sight of its theme and the character's arc. Kino Lorber Studio Classics delivers a fine Blu-ray release with a serviceable transfer that gets the job done with many admirable qualities. It's a fine film, certainly not historically accurate, but a decent western all the same. Worth A Look.